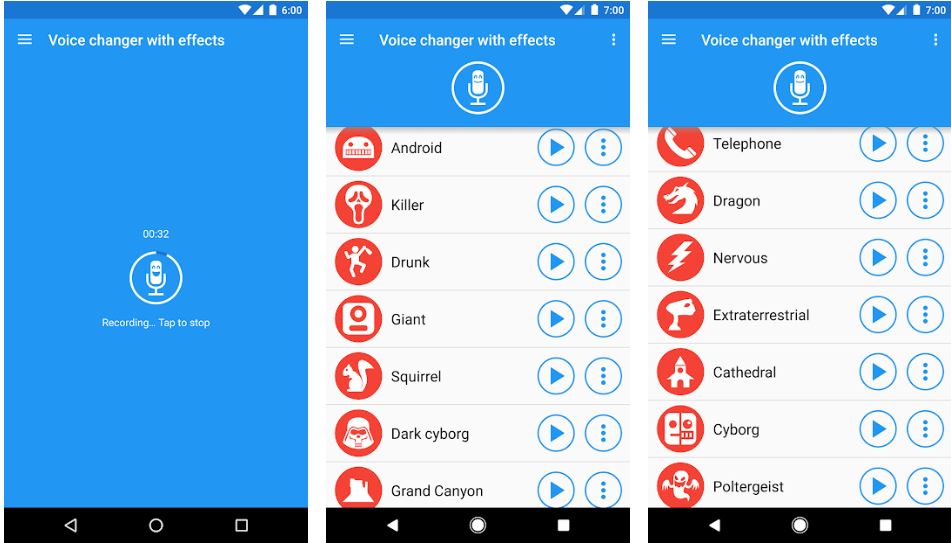 Already downloaded by millions of people, this app really one of the best available choices on the Google play store. It can change your original voice sound to a modified one with more than 40 of effects, choose the one as per your choice. Such as  Robot, Giant, drunk, zombie, monster, extraterrestrial, and many more.

Get it for Android 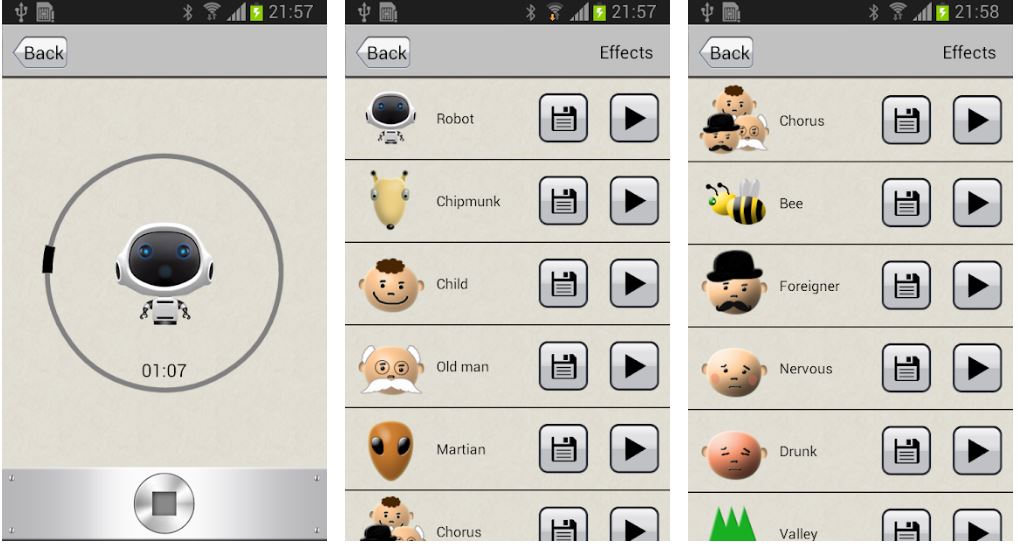 Yes, the name of Voice Changer is pretty simple and straight forward as the tools itself is. Though it is a very popular tool as it is more of an entertainment app. To make pranks or to create some funny voice recordings you can use Voice Changer anytime. Make prank on your relatives by playing your father’s or mother’s voice, or play with you colleagues by pretending to be your boss, this app is always a fun, just like a video game. The input voice quality and peach can be changed beyond recognition, also you can add extra noise or interference sounds. 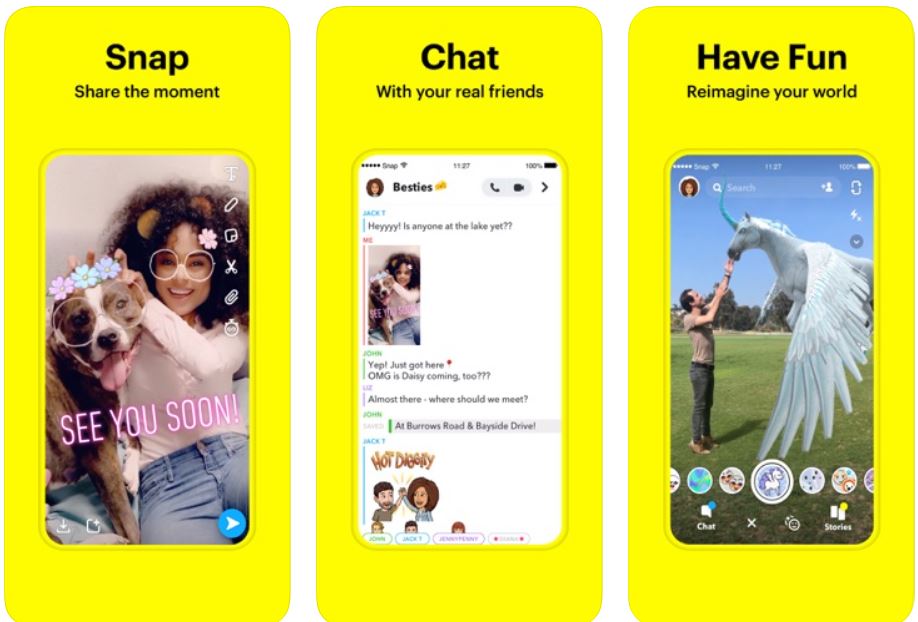 If you are a Snapchat user then you may know about it already. Apart from being a popular social media platform, Snapchat also provides some useful tools related to voice changing and also Photo editing. Actually, for many people, Snapchat is more of a popular Voice Changing application than a Social Media platform. It is free and also comes with many adds, as Snapchat is a Social influencing (marketing) platform as well as Instagram. Using Snapchat’s Voice Changer tools you can create or record videos with goofy voices. Also, you can upload and share them directly with your friends and followers. You can use this application on both Android and iOS devices. 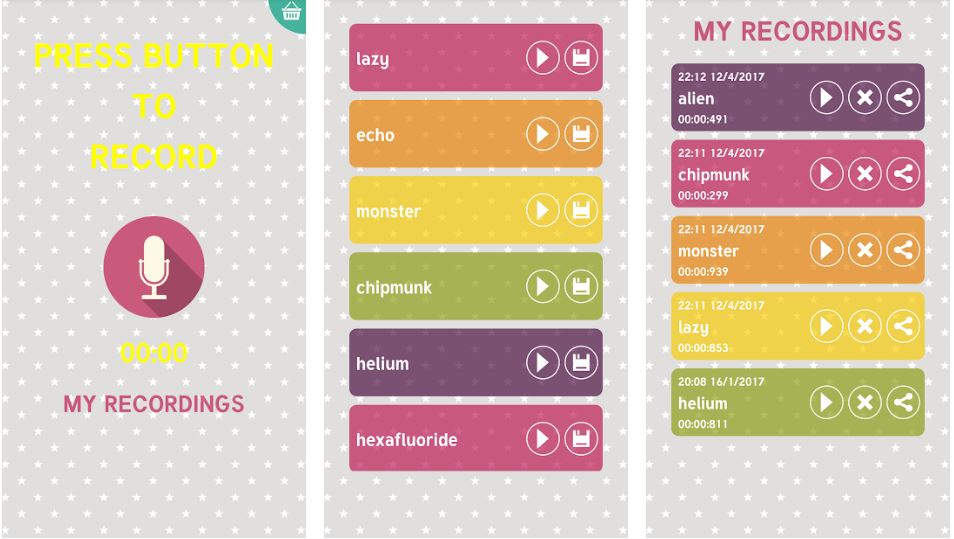 One of the most popular Voice Changer application for Android devices is the Voice Changer by Kidsapppbox. Unlike many other similar types of applications, this one is quite old, actually the oldest in this list. Though, this application receives many regular updates so the app is quite ready for present-day use as well. In Voice Changer by Androbaby the fmod sound engine has been used. This one is a smooth app, also provides good results. Though the main shortcoming is that the library is not that big enough like many other latest alternatives. Some of the popular effects are Chipmunk, Helium, and others. Though as this application is an old one, so it has some retro effects and radio type effects which may be useful for classic lover people.

The list and this discussion would be incomplete if we do not include the Call Voice Changer app, as this is not only a popular Voice Changing application, but also it provides the feature to call anyone using the voice changer application so that the person on the other end won’t be able to recognize the voice of the caller. This is a unique way to make fun and prank people over the phone calls. If you are looking for an app, especially for Voice Changing phone calls then this is your stop. 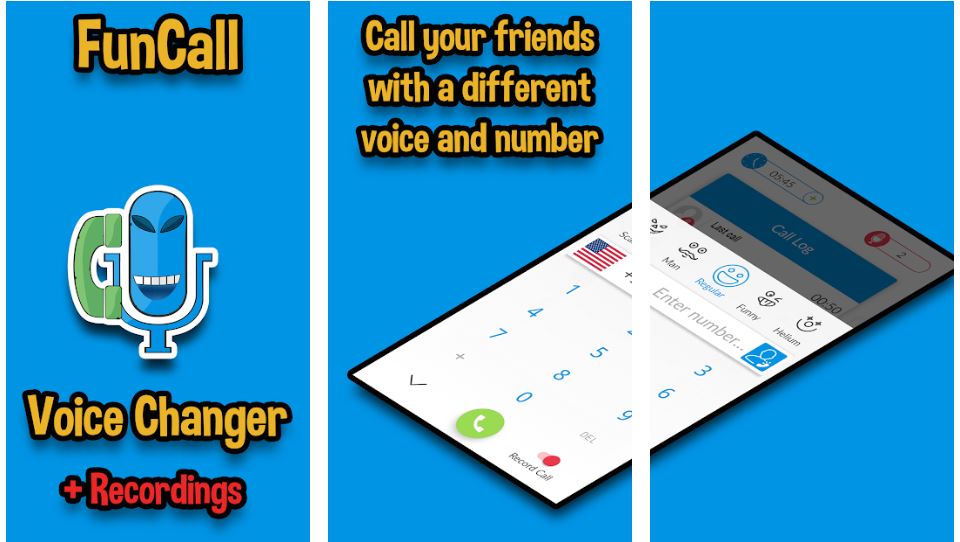 This one is another application for making Voice Changing Phone calls. So, there is no need to introduce this type of application or to elaborate on the utilities of this kind of app. But, this app is a little bit superior to the IntCall app, as here you can record your own voice with any effects provided in the library and can listen to that clip. There are some of the effects are free, and some of the effects are paid, which you have to buy separately.

I have added all types of available mobile-based Voice changing applications in this list, but if your goal is to have fun like most of the users of such apps, then going for paid ones should be avoided. Also if you want to make some videos with a changed voice to be uploaded on some social media or video streaming platform, then you can use these audio Changer apps. Using apps such as Funny Call or IntCall is not advised without strong reason due to the high charges.

Steps to view local users and groups in Windows 10