If you are on Windows, you might have observed the Sticky Keys on all the recent versions of Windows, which is an accessibility feature available. With the help of sticky keys, the modifier keys like the ctrl, shift and alt will be kept pressed initially for the user unless the last keyboard key is pressed that can accomplish some task. For example, if you want to open task manager using ctrl + alt + del, with the sticky keys are enabled, you can, hit the keys one by one, to open task manager, instead of pressing them all at once, which can be troublesome for certain users.

So, without any for the delay, let’s get started with how you can disable the sticky keys popup, each time you hit the sticky keys 5 times. Besides sticky keys, using the ‘Num Lock’ 5 times will also open the Toggle Keys shortcut, and pressing the shift keys 8 times will open up the shortcut for filter keys. But before that, let’s find out what the filter and toggle keys do.

Toggle Keys: You will get a sound each time you press the toggle keys. All Caps Lock, Num Lock, and the ancient Scroll Lock keys are toggles keys.

Filter Keys: With Filter Keys enabled, you will no longer be able to keep pressing a key for the desired outputs. For example, if you are typing a document, and you want to go to the bottom of the document from the top by keeping the down arrow pressed, it will work just like you pressed it once, and released it immediately.

Each of the shortcuts to the keyboard accessibility settings and the final results can be irritating if you don’t need them.

So, let’s find out how you can disable them.

Step 2: Now, just scroll down a bit, and turn off the shortcut keys to ‘Sticky Keys’, ‘Toggle Keys’, and ‘Filter Keys’. 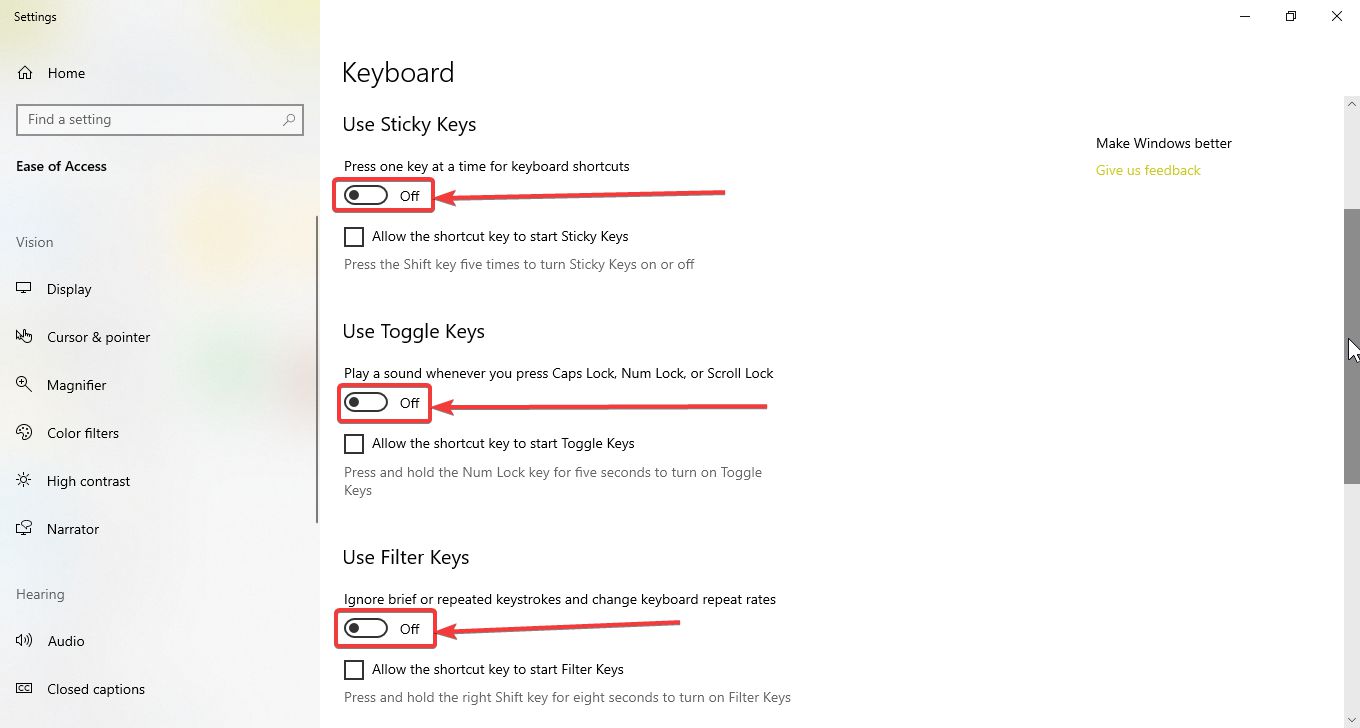 This can be really useful on Windows computers. The process is almost similar to Windows 7 and older computers running older versions of Windows, as well, where the only difference lies in the user interface, where you change the keyboard settings.

So that was all. Do you have any questions? Feel free to comment on the same below.

When we start using our Windows computer the default folder for storing the Downloads, Documents, Pictures, Videos, and everything else is stored within the...
Read more
How To

The traditional way of shutting down a Windows computer doesn't take a lot of time and we all are quite habituated with the way...
Read more
news

Microsoft has launched a new Windows 10 Insider Preview with build 19569.1000 for Fast ring users with new app icons along with other important...
Read more

When we use our computers running Windows, copying and moving files from one location to the other is something...
Read more

Thanks to the powerful Android phones that we have in our hands in 2020, we can run a lot...
Read more
- Advertisment -
- Advertisement -

If Google Chrome is the browser of your choice...
Read more
How To

When we start using our Windows computer the default...
Read more
How To

The Ubuntu distribution of Linux doesn’t need an introduction,...
Read more
How To

When we use our computers running Windows, copying and...
Read more