Google Chromebooks uses a Chrome OS which is a fork of original open-source Chromium OS project. This OS is based on Linux and one of the lightweight operating system since it basically meant to provide the immerse experience of internet surfing. It supports all the Chrome browser plugins and apps; also provides a basic but intuitive Linux desktop environment, so that users can handle it easily.  However, if you are planning to get a Chromebook, I would like to recommend before that experience the Chrome OS, first, in a virtual environment.

Since the Chrome OS is not available for users separately to download and use on personal PC/laptop or Virtual machine. In such circumstances, Neverware CloudReady OS comes handy. You can say the CloudReady OS is the best alternative to Google Chrome OS.

On this Page show
What is Neverware CloudReady OS (free)?
Download the CloudReady Chromium OS for VirtualBox/VMware
Get the Virtual Machine application or software
How to install CloudReady on VMware Workstation VM?
Further Neverware Chrome OS installation and Setup

As we know Google’s Chrome OS itself based on open source Chromium OS. The core difference is the few features those added by the Google such as support to Android apps.  However, apart from some of Google’s own signature feature; if someone wants to try the Chromium OS/Chrome OS on Virtual machine then Neverware CloudReady OS is the best option. You can say that it is a free alternative to official Google Chrome OS.

Actually, what the Neverware did, they have taken and modified the original Chromium OS just like Google. Being an opensource project, they have not even modified it but also added some enterprise features to sell it to Enterprises and businesses.

So, basically, the Neverware offers two paid versions and one free version. As I said, the paid versions for enterprises, while the free version can be used by home and schools for personal usage. It is called Neverware CloudReady OS Home Edition. The difference between the CloudReady OS-free version and paid versions is it not get the phone and  Email support plus no compatibility with Chrome Management and the Google Admin console. Rest of all features are same in all versions, even, identical to Google Chrome OS.

CloudReady is designed to work on any PC or Mac hardware and also available as a Virtual image. The OVA image (open virtual appliance or application) of the Home Edition can be installed on any Virtual software such as VirtualBox and VMware applications (VMware ESXi, VMware Workstation, VMware Player, and VMware Fusion). Running on Linux, Windows and Mac.

To install Chrome OS on Laptop or PC, CloudReady Chromium OS is available exclusively for a USB drive. And to test on the Virtualbox or Vmware virtual machines, here is the link to download the CloudReady OVA image: Download

Get the Virtual Machine application or software

There are two most popular and free Virtual machine software to create VMs on Windows, Mac and Linux like Ubuntu. One is VirtualBox and the other one known as VMware Workstation Player. However, the Virtual Appliance Image of the CloudReady Chrome OS is only meant to work on VMware Virtual Machines. It is also clearly mentioned on the Blog of Neverware that current release of CloudReady will not work on VirtualBox.

We tried to install the CloudReady Chrome OS on VirtualBox on two different Windows as well as Ubuntu PC system but both we got an error; shown in the below screenshot. 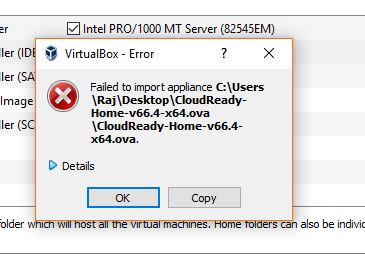 The Neverware also one of its blog posts mentioned they are working on this problem and in future, the Virtual Appliance of CloudReady OS will also work on VirtualBox. So, it is recommended to experience this Chrome OS on Virtual Machine, install the VMware Workstation player. It is available for all major operating systems: Windows and Ubuntu Linux. However, the Mac users need to try out it using the VMware Fusion.

On Windows it is easy to install, however, if you are a Ubuntu Linux then you can see this tutorial: Install Vmware workstation player on Linux Ubuntu

How to install CloudReady on VMware Workstation VM?

Screenshots for the Chrome OS installation. 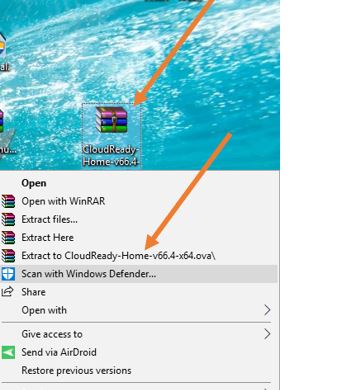 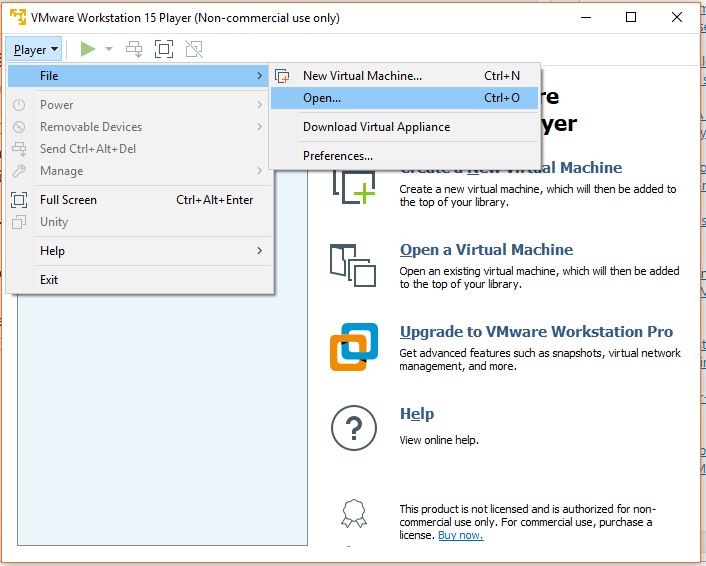 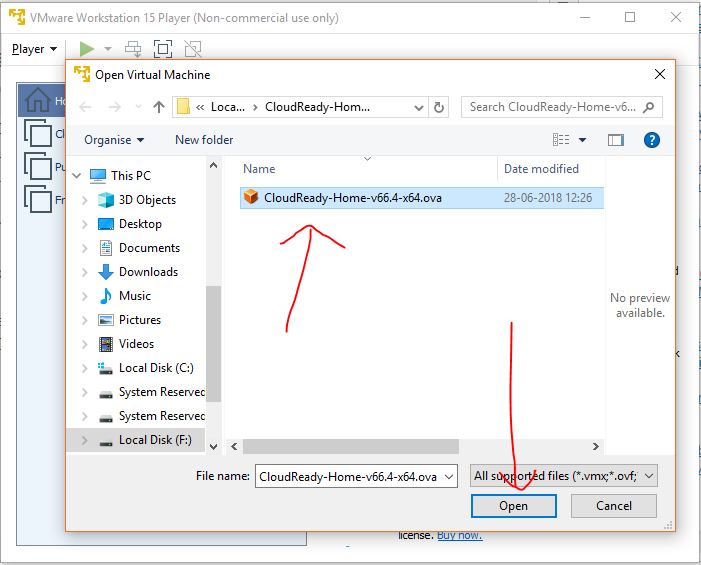 Edit the name fo the Virtual Machine, if you like. Otherwise just push the Import button. 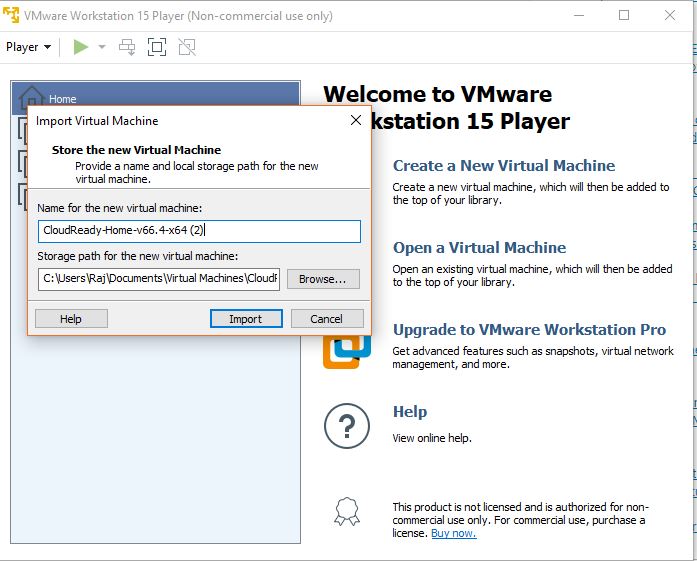 Select CloudReady VirtualMachine and then click on the Edit Virtual Machine settings. 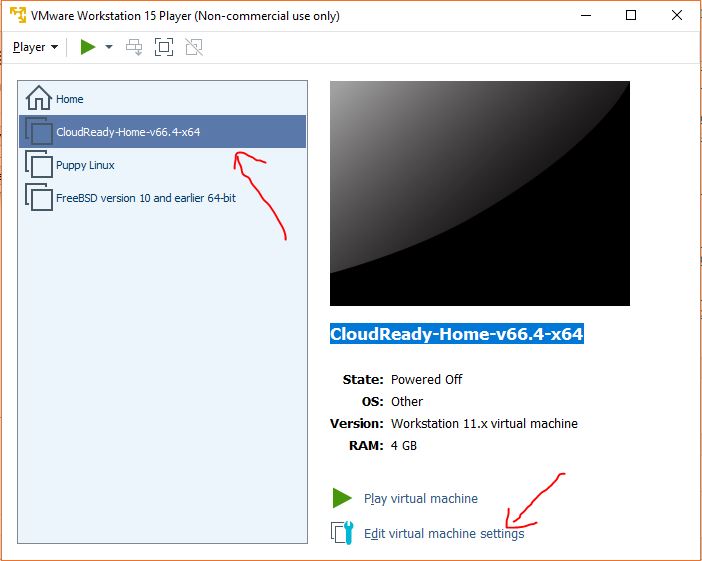 Tap on the Network Adapter settings and then select the NAT option and finally press the OK button. By Default, it uses the Bridge connection but in some cases, it is unable to draw an IP address for Virtual Machine, so the NAT would be the best choice… 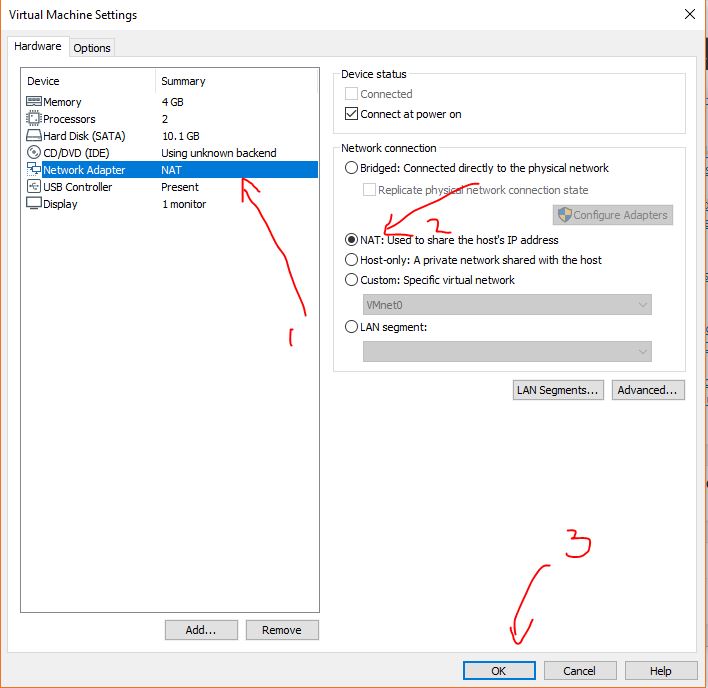 Finally, click on the Play virtual machine option to start the Chrome OS. 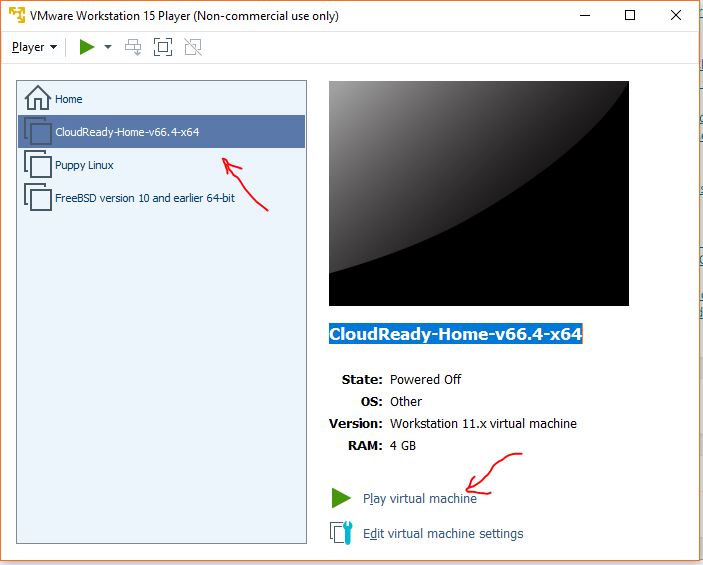 Once the virtual machine up and running. The first screen will appear with a Chrome logo and a few other options such as language and Accessibility. If you prefer the English language then just click on the Let’s go button. 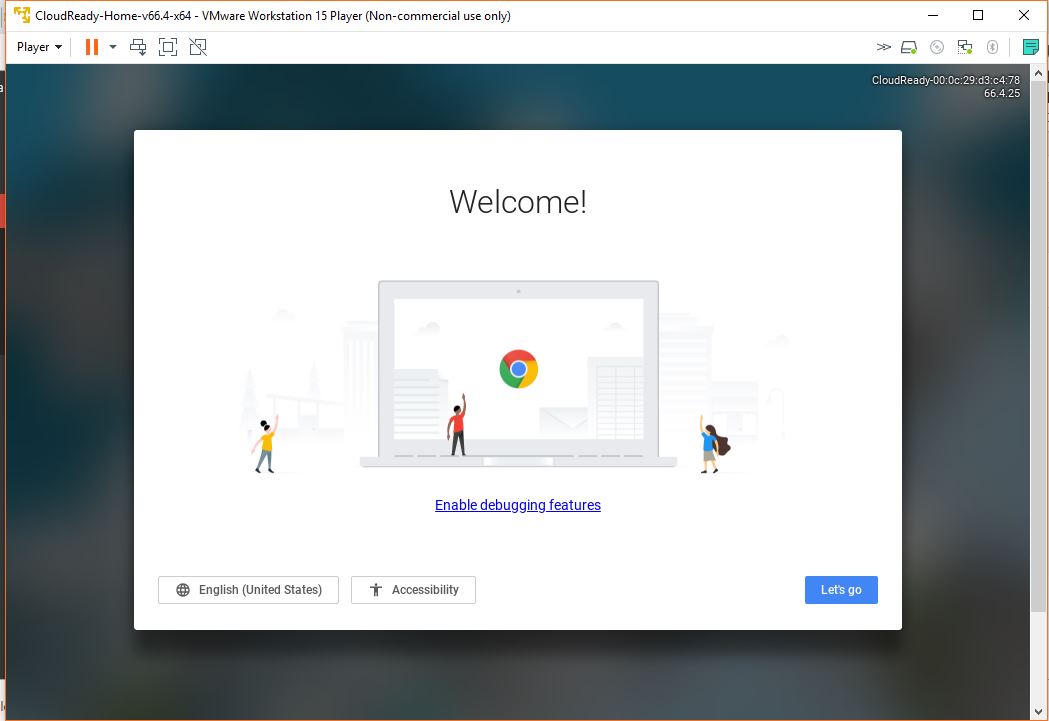 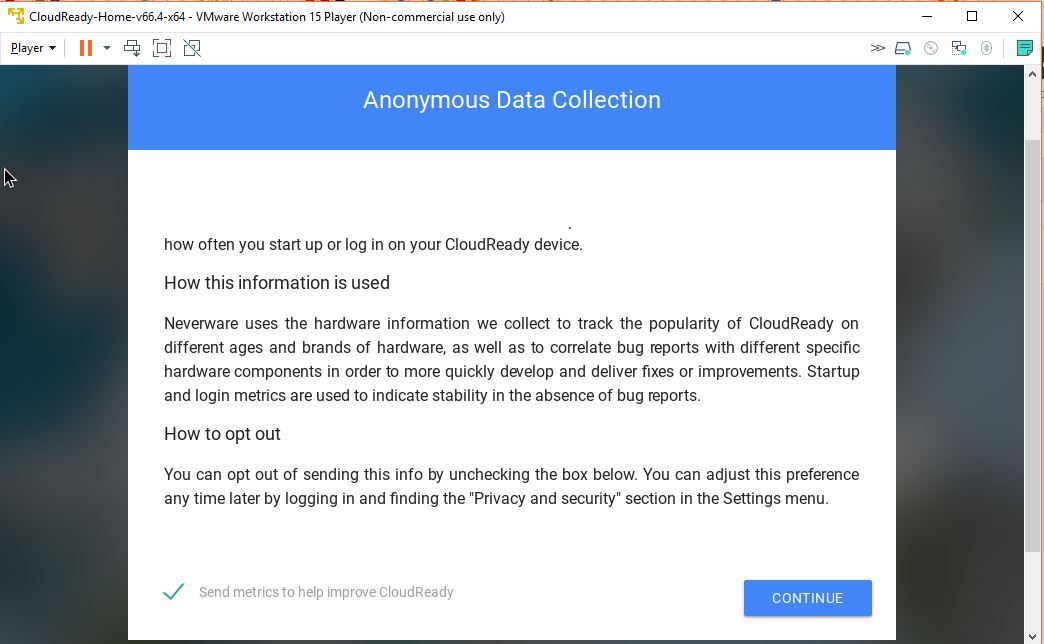 Enter the Google Account ID or you can Gmail Email ID to sync all your existing Chrome browser data. Then the click on the Next button. 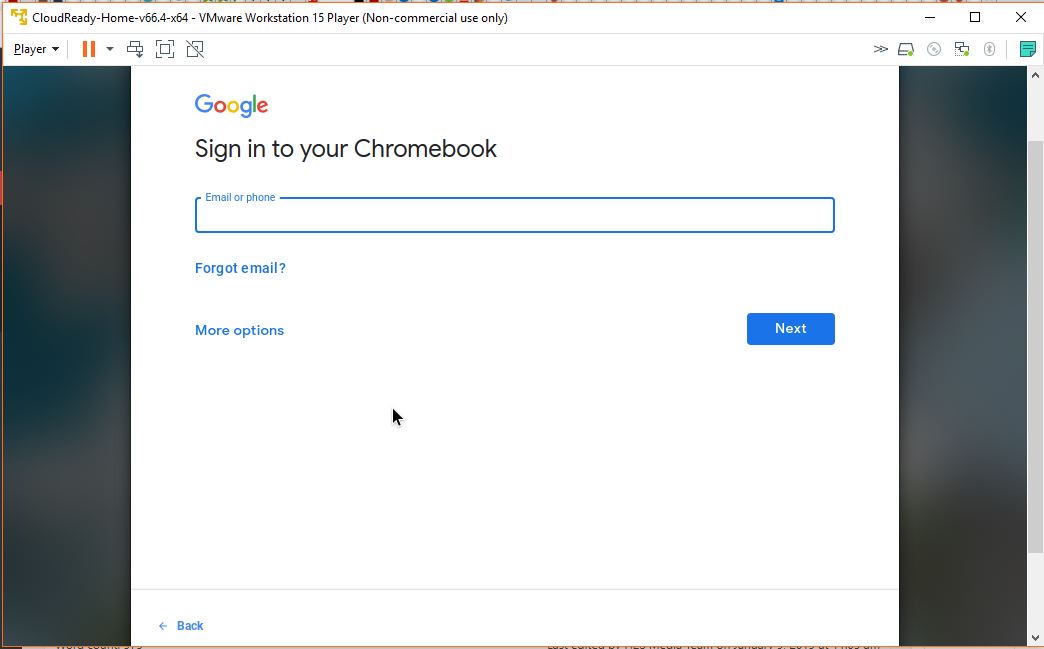 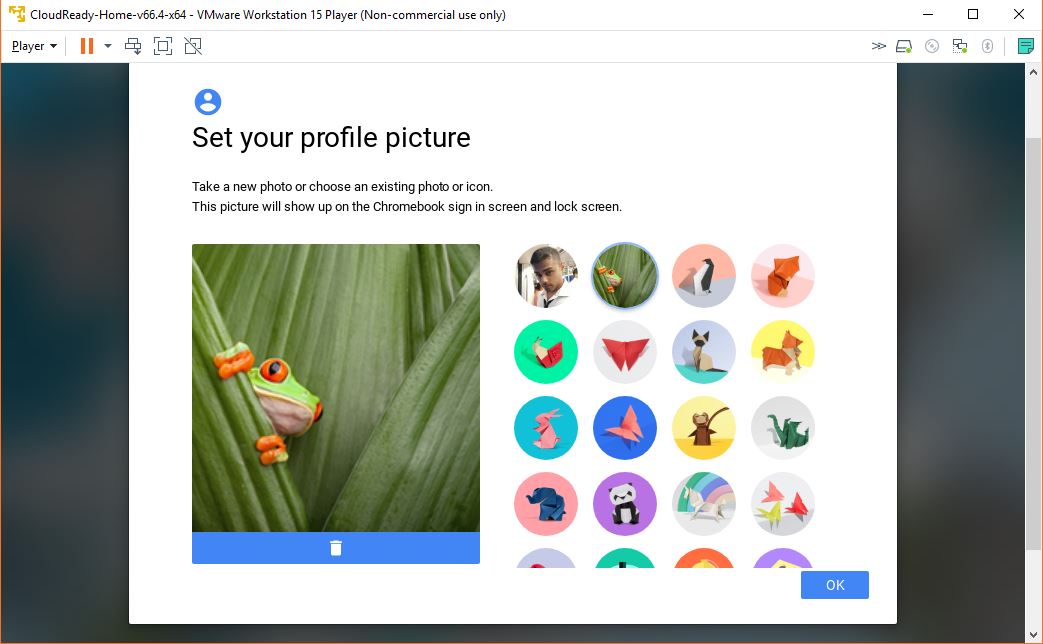 And finally, you will get the CloudReady Chromium OS which exactly identical to official Chromebook Chrome OS.

Even it supports the VirtualBox app to text different VirtualMachines directly on the Chromium operating system. It is really beneficial for both home and enterprise users of Chromium OS. 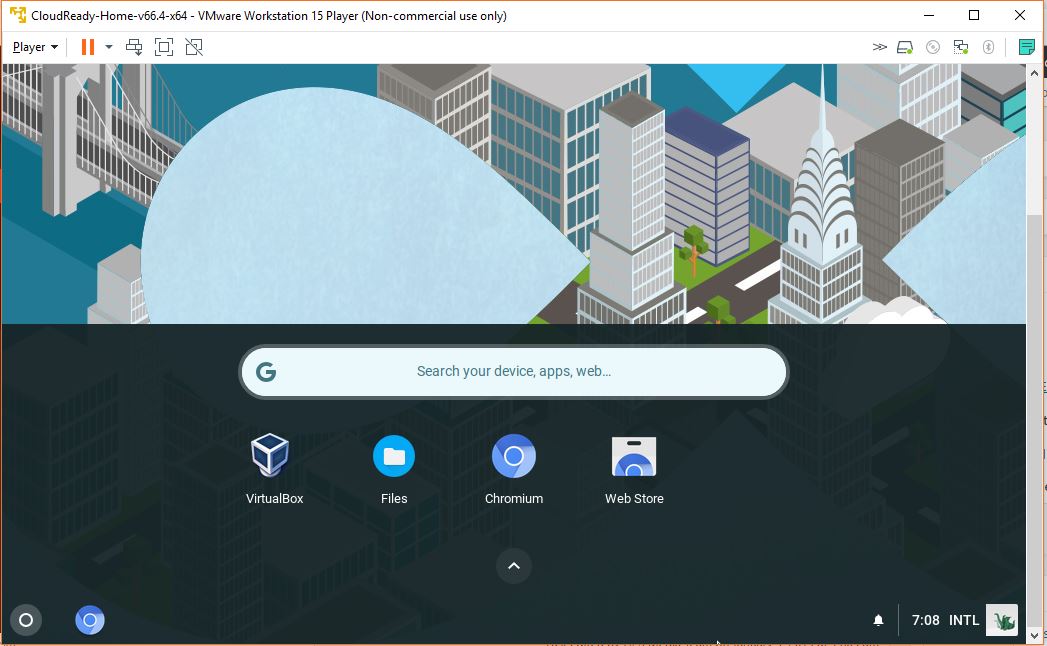 You can further install the apps on CloudReady Chrome OS from the Web Store. It is the same store which you will get on your Google Chrome browser with the exactly same functionality and a wide range of Apps and plugins. 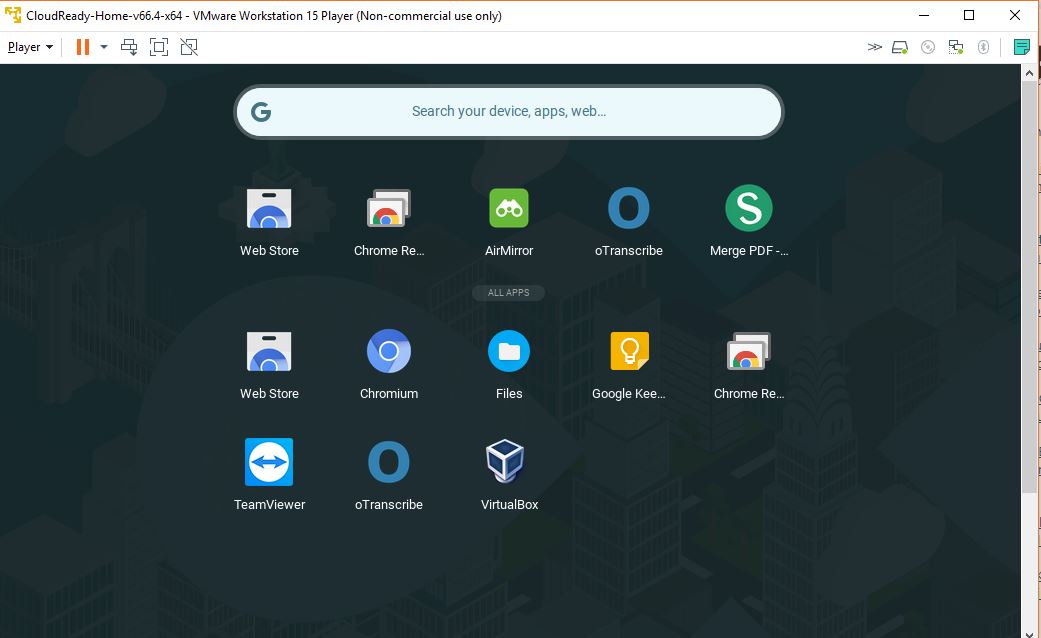 Power bank purchasing guide: Get the best one within your budget with simple tips

10 Best ChatGPT Chrome Extensions to add an AI in Browser

How to Restart Web Browser Chrome