How to install Notepadqq, Notepad++ alternative on Ubuntu

Notepad++ is one of the best note writing applications, available for Microsoft Windows, and it is by far the best alternative for ‘Notepad’, which is available for Windows computers. Notepad is not only used taking and writing notes, but it is also used by programmers to write codes, and check them. But, Linux is one of the most favorite platforms for those, who code, but Notepad++ unfortunately is not available for the platform. But today, I will be discussing how to install Notepadqq on Ubuntu. Notepadqq is the best alternative for Notepad++ on Ubuntu and other Linux distributions, and you can easily download that, using the command line or Terminal on Linux.

How to install Notepadqq on Ubuntu from ‘Snap’ repository

Step 1: Open the terminal command line, and type ‘sudo snap install notepadqq’, without the quotes, and hit the enter key. 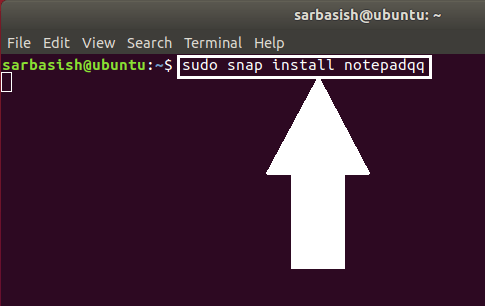 Step 2: The download and installation will take quite some time, and you should wait, till the download completes.

Step 3: Once the installation completes, you will get the following screen. 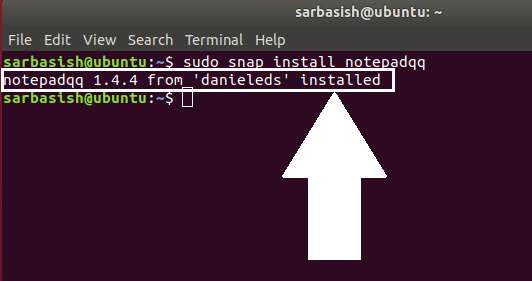 How to open Notepadqq on Ubuntu

You can open Notepadqq either from the ‘Terminal’, or you can even get it from the ‘Search your computer’ section and by searching for Notepadqq.

Though Notepadqq doesn’t offer all the features, which are available on Notepad++, but it is still a great alternative for Notepad++. The option to define a new language is not available on Notepadqq, which is a feature available for Notepad++. The user interface, the basic features are quite same, and thus, you will not face any problems getting started with Notepadqq, if you have used Notepad++ a lot. For coding and taking notes on Ubuntu or any other Linux distributions, Notepadqq will help you in almost all the cases. Here is a screenshot of Notepad++ and Notepadqq, side by side.

You can observe the differences in the above image, but the differences, for sure, is not going to be a deal breaker, if you have made up your mind to download and install Notepqdqq.

Hope the small tutorial to install Notepad++ alternative for Ubuntu, or Notepadqq, was helpful for you. If you face any issues installing it, let me know, in the comment section.

Are you looking for Linux distributions that give look like popular Apple's macOS? Then here is the list to go through... Although it is impossible...
Read more
Tools

Linux is the open platform, and you can choose the best distro by considering every single element of the distribution. Furthermore, you can also...
Read more
How To

How to install KDictionary offline dictionary app on Ubuntu Linux

Most information that you need at some point in time is readily available to us today with the aid of the internet, and the...
Read more

Have you read the title of this tutorial and...
Read more
How To

If you are seeing blue double arrows on Windows...
Read more
How To

How to deactivate or hide Cortana completely

Cortana is a Voice Assistants service in Windows 10...
Read more
How To

Most programs that we all come across has some...
Read more