Do you want to install macOS on Linux using Virtual Machine? The Sosumi could be an easy option, though there is no 100 percent guarantee it will work.

To install macOS on Linux using Qemu virtual machine, the developer Alan Pope (popey) has created a bundled snap package known as Sosumi. It is easy to install and works on Ubuntu, Fedora, Debian, and other major Linux distributions. Here is the Github page and source of this snap package. Or directly visit the Snap page of Sosumi.

After the installation of the Sosumi packages, the Clover bootloader will pop up and boot to the macOS recovery system. One thing that we need to note down is the Sosumi itself doesn’t contain macOS instead when we fire up snap packages based macOS-Simple-KVM virtual machine to install macOS Catalina desktop it downloads an installer image for the same.

The VM created by this snap package will have a fixed resolution window, initial launch with 2GB of memory, bundles qemu-virgil, which includes virtio-vga, a paravirtual 3D graphics driver.

I tried to use it on Ubuntu 18.04 LTS and faced a couple of issues. Let me take you through the steps of macOS installation on Linux using Sosumi and in between, I will discuss what problems I have faced; And why finally I gave it up.

If you are using Ubuntu or Linux Mint’s latest operating system version then SNAP will be by default installed on your system and you can simply run the following installation command. But for other supported Linux systems you need to install the SNAPD, the steps can be found here in the SNAP installation documentation.

To start or initialize it after the installation, simply type:

in the command terminal.

But after installing the above stable package of the Sosumi and later initializing it, I continuously got an error couldn’t connect to KVM, although everything was working fine and tried all the rings and whistles but couldn’t take it forward. Later, I removed the stable package and installed the developer one using the below command:

Yes, this time it did work and connected the KVM successfully but again with one more error.

So, I enable the xhost access control program by the following commands:

Once, it done, ran again sosumi command and this time I successfully able to start the process, first it downloaded the macOS installer image and then it triggered the Qemu machine with the Clover interface to install macOS on it.

Few things which we should keep in mind before moving further to install macOS on Linux virtual machine.

If everything goes well soon you will see Clover bootloader, simply press the Enter button to start booting macOS.

Note: To release the mouse pointer or take out and to focus it on host operating system press CTRL + Alt + G simultaneously.

If you are a user of macOS then you already know what to do next, however, if not then first we create a Disk partition to install on macOS on Linux VM. Select the Disk Utility option.

Select the first partition created by the Sosumi script which will be of 68.72 GB, enough to start with. Now, click on Erase button given in the top menu. 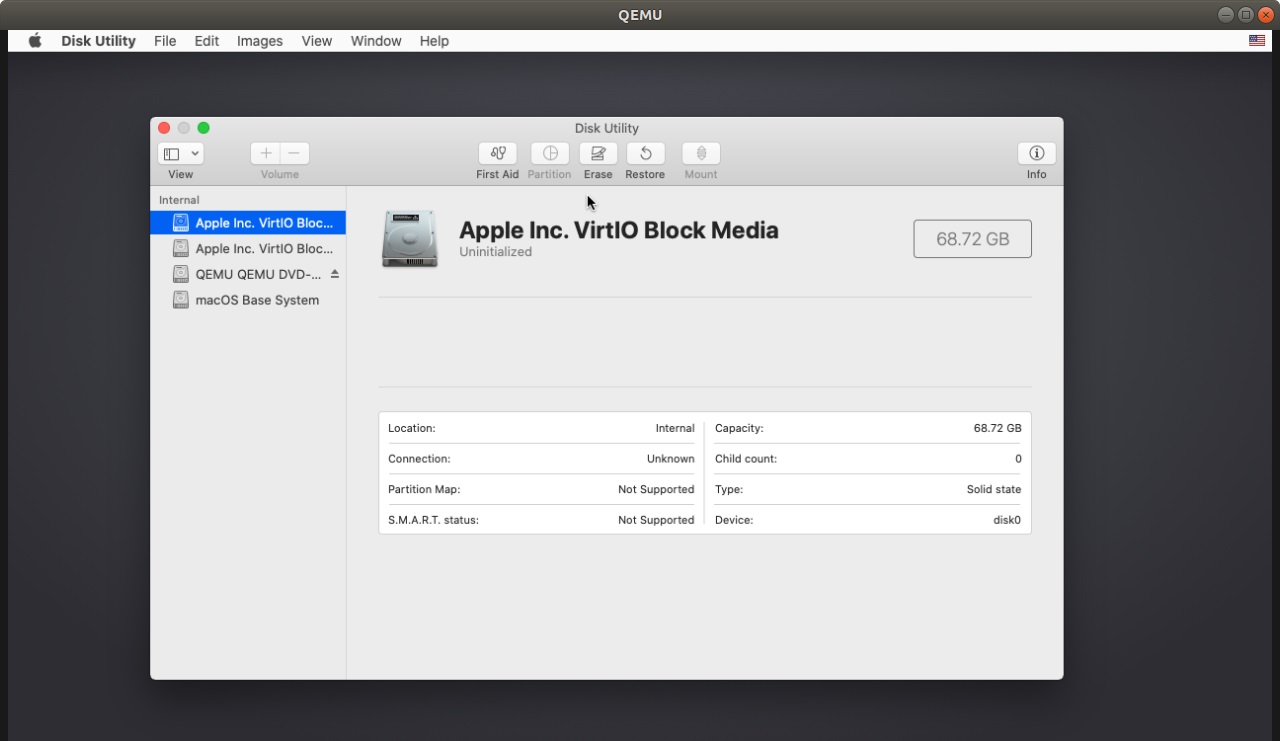 Simply give a name to the disk while leaving the rest of the options as it is, click on the Erase button.

Once done close the Disk Utility and get back to the macOS Utilities screen.

As here we are showing the system that we are not installing macOS from zero instead assume there is some problem and we want to reinstall a new copy of macOS, that’s why we have the “Reinstall macOS” option, so just select that and hit the Continue button.

The disk we have created above will show in this step, select that and hit the Install button to get the macOS on Linux Virtual Machine.

So, now if everything goes well it will install in around 50 minutes and if not then even I don’t know how much time it would take because in my case, first, it showed 23 minutes than 11 hours.

It was kind of stuck here. I even went through the developer page of Sosumi but didn’t find any relevant way to solve this problem, thus in my case I was not able to install it. I know running macOS on hardware and environment which is not meant for it is always a cumbersome job.

So, this was my predicament, however, if you have some time and want to experiment with it you can try Sosumi on your machine may be it work fine in your case. Nevertheless, I will also try the source of this snap package VM that is macOS-Simple-KVM, a set of tools to set up a quick macOS VM on QEMU, accelerated by KVM and will let you know my experience with it. Till then be safe and keep experimenting with Linux.

Tech companies making the people dance to their tune in India

9 thoughts on “Sosumi, an easy way to install macOS on Ubuntu Linux, but didn’t work”