Although, we can install KDE on any popular Linux, however, here we have listed some best and most popular Linux distro that comes with the KDE desktop environment out of the box.

The “KDE Community” is an international team that develops free and open-source software for both desktop PCs and mobile devices. The core product of KDE is currently the Plasma desktop environment for Linux and UNIX platforms. Also, offers Plasma for mobile devices.

Apart from the beautiful desktop full of widgets, KDE offers hundreds of programs in many categories such as the Internet, multimedia, entertainment, education, graphics, and software development. KDE software is translated into more than 60 languages ​​and runs natively on Linux, BSD, Solaris, Windows, and Mac OS X. Nevertheless, many of the applications that can also be used under GNOME without any problems are released as “KDE Applications” every four months.

The key reason to choose KDE Linux distros out of the box is better optimization and integration of the GUI.

MX Linux is one of the best KDE Plasma desktops with Debian at its core. If you are looking for the best alternative option for Ubuntu, Debian, and Linux Mint but with a similar package base then try MX Linux. It is relatively new but fast and easy to use. The package manager offers Debian repo along with ones from MX Linux, let’s users install a wide range of applications using GUI Application manager. 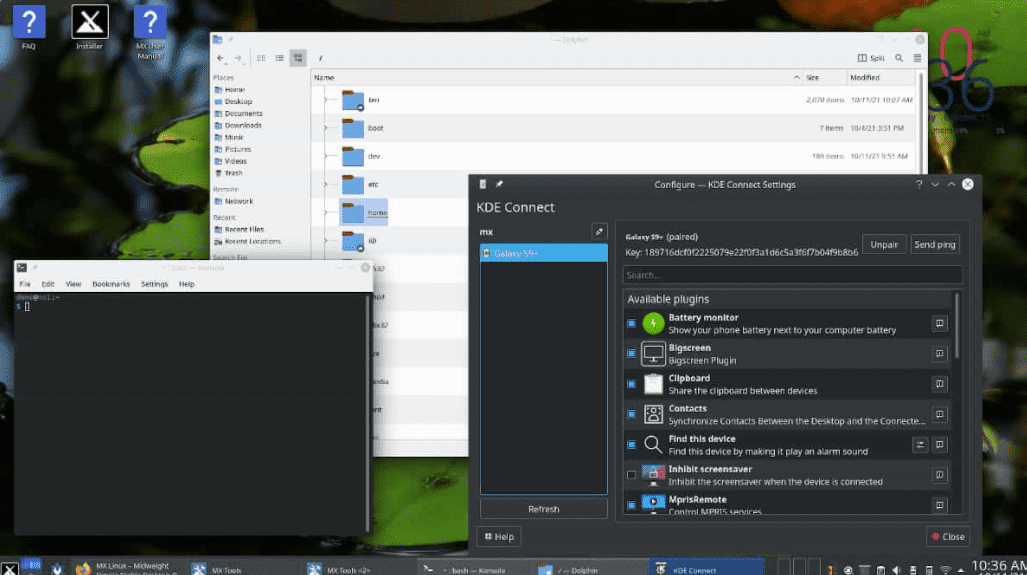 Kubuntu relies entirely on applications from the KDE community, in particular on the desktop environment KDE Plasma. It is based on Ubuntu, hence all Debian applications for it are also available for Kubuntu. Instead of Gnome, this Linux distro uses KDE as the desktop and is, therefore, more reminiscent of Windows than Ubuntu.

Also, just like Ubuntu, the user will have a Long Term Supported version of Kubuntu to get an extremely stable Linux distro.

The users will have access to all the KDE default applications in Kubuntu which are not available in Ubuntu such as instead of Thunderbird as a mail client, Kubuntu comes with Kmail. 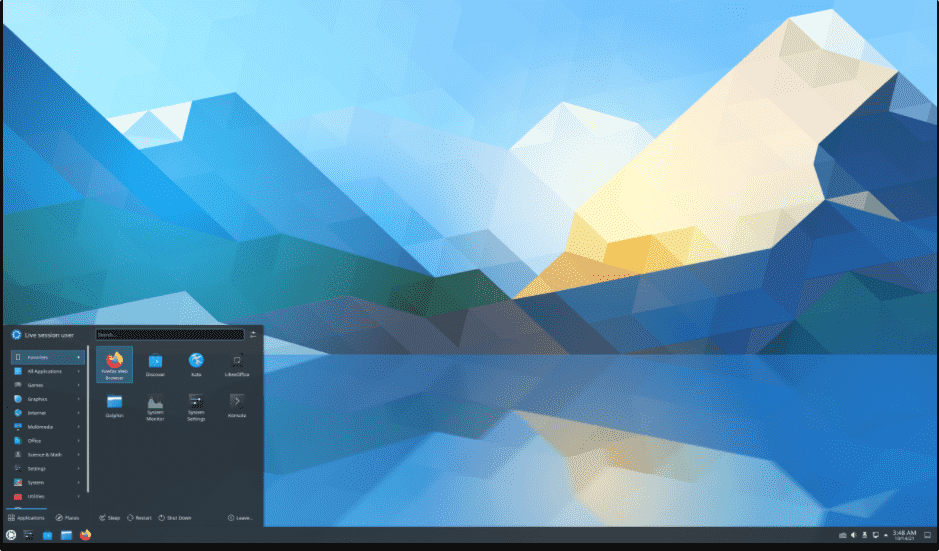 Unlike Kubuntu, KDE Neon focuses on providing mainly the latest updated KDE software as soon as possible but with Ubuntu stability at its core.

Yes, it is also based on Ubuntu’s long-term release but with cutting-edge features, which means packed with the hottest software from the KDE Community.

The operating system is available in four different channels, user, testing, unstable, and developer editions. The user always has an up-to-date Linux with a fresh look and the latest plasma version. The Qt and KDE software is usually more up-to-date than (K)Ubuntu, and there are more frequent updates. Everything you need for daily work is pre-installed in terms of software. All other Linux applications can be quickly retrofitted via the Discover program management.

Hence, those who want always the latest KDE version should go for the Neon Plasma desktop.

Manjaro KDE is one of the best rolling Linux distro based on Arch Linux that comes in a different desktop environment and one of them is with KDE Plasma. Its graphical user interfaced Application manager is one of the best to install Linux software because of the wide range of repositories options such as AUR, SNAP, Flapak, and of course, one can also use the GUI to build applications from their source. That is the reason, it doesn’t deprive us of applications at all for our daily usage.

Moreover, unlike Arch Linux, this offers a guided installation wizard that makes even novices can easily install it. In short, Manjaro is a fast, powerful, and lightweight distribution that provides access to the very latest cutting-edge – and bleeding edge – software. 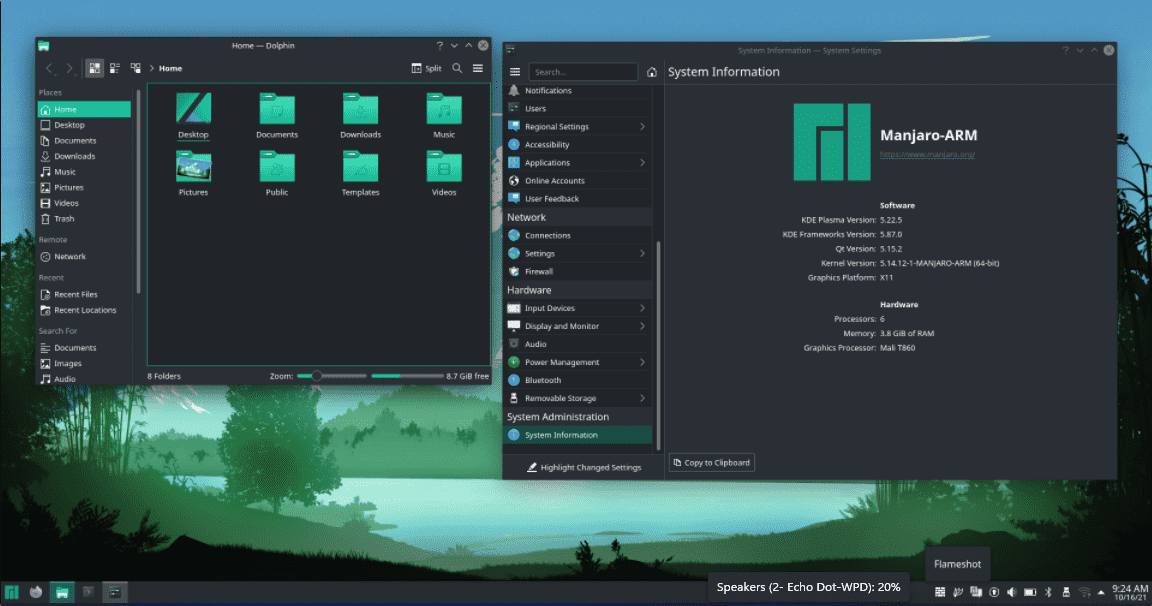 Well, when we talk about the best KDE-based Linux distros, how can we leave the one which does not use RPM, here is Fedora. It is also known for providing cutting-edge technologies to users as soon as they are stable to experience.

Fedora KDE is a project sponsored by RedHat and just like Manjaro it is also available in multiple desktop GUI options and one of them is KDE plasma. 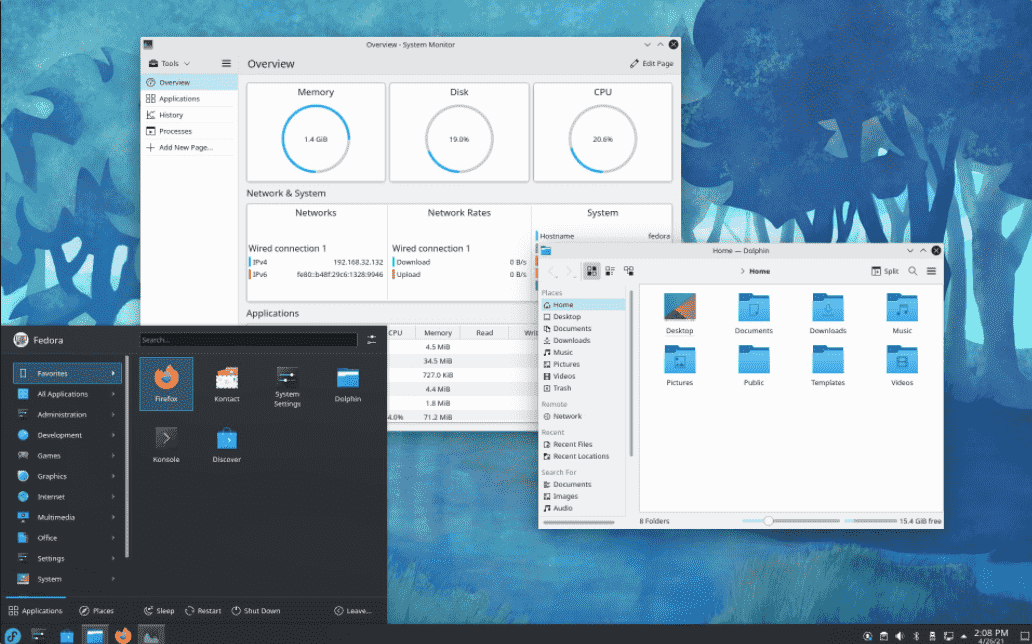 The standard version of Fedora is in Gnome which is not appealing much for desktop PC or laptop users who want a beautiful OS on their system with many pre-selected top quality applications that suit all modern desktop use cases – from online communication like web browsing, instant messaging, multimedia, entertainment and e-mail.

You will find all popular KDE applications there on the Fedora with optimized integration with a sleek look and outstanding graphical appearance.

OpenSUSE is a continuation of the classic SuSE, offered as openSUSE Leap or OpenSUSE Tumbleweed. Leap is the stable point release distro means it offers one release each year and in between security and bugfixes while openSUSE Tumbleweed is always the latest distribution (rolling Linux), so to speak, and is continuously updated with new packages and software.

Both Leap and Tumbleweed can be set up with KDE Plasma desktop while installing it using its setup wizard. Therefore those who want LTS with more stability than Tumbleweed can go for Leap whereas for the latest packages, Leading-Edge, and continuous updates Tumbleweed is the best option in OpenSUSE.

In contrast to other distributions, OpenSUSE uses the in-house development YaST (Yet another Setup Tool) for configuration. The popularity of Ubuntu and other Linux desktops are fading the shine of OpenSUSE and YaST a bit, however, because of the SUSE enterprise, it is still worth using and starting with. The packages installation is quite easy, also there are a lot of new software available to install directly using one click from software.opensuse.org. 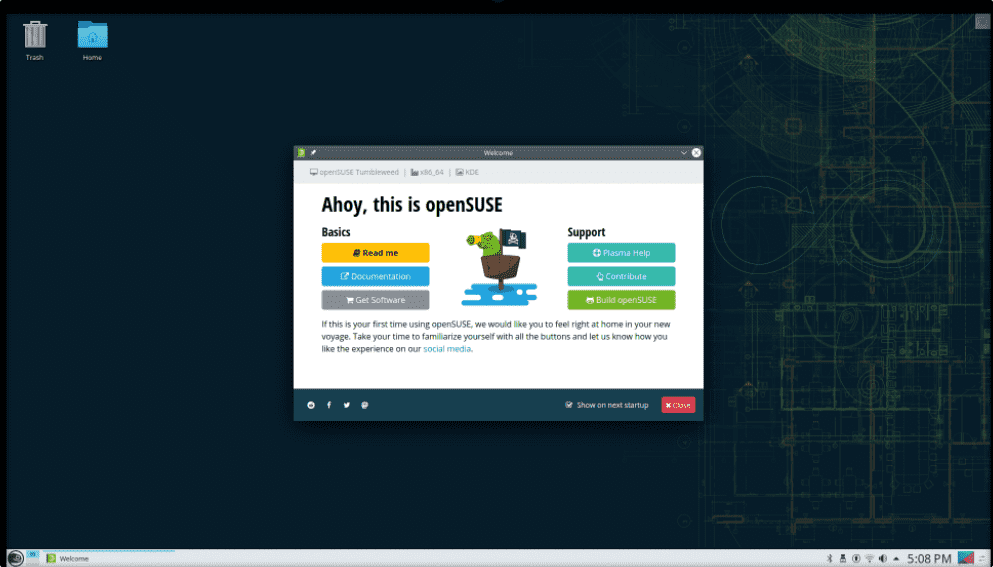 Garuda Linux is another rolling distribution based on the Arch Linux operating system. It is quite popular among gamers because it is a performance-oriented Linux with many tweaks to enhance optimization. For example, it offers the Zram app out of the box to manage memory and CPU performance. Garuda Linux also has striven to provide system stability by including the Timeshift backup utility.

For installation, the user will have a graphical installer (Calamares) for easy installation which is not the case with standard Arch Linux. It is available with multiple desktop environments and one of them is KDE plasma. 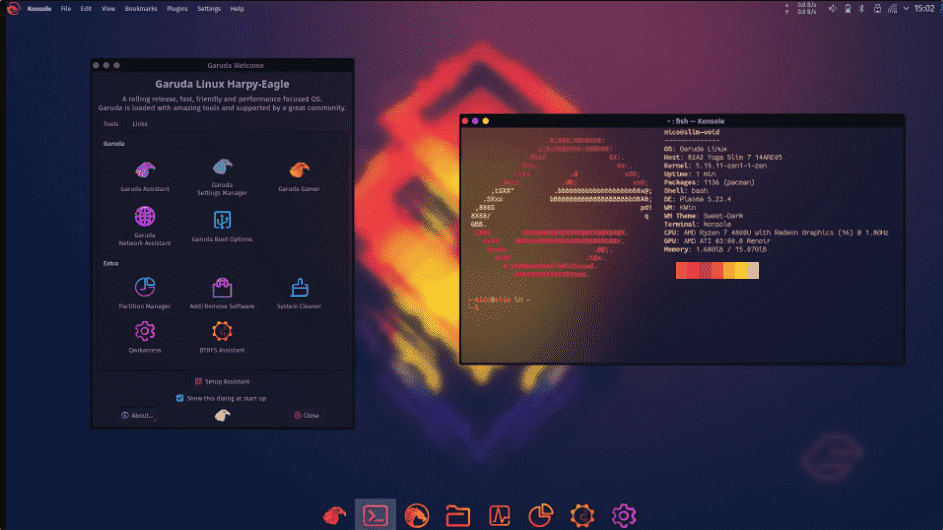 Well, we can install KDE Plasma on any popular Linux that you are using on your Laptop or desktop Pc. However, there are many beginners who do not have much technical experience and don’t want to mess with commands. For them, the above-listed out-of-the-box KDE GUI installed Linux distros are optimal options. Also, due to the windows-like interface, users switching from Microsoft OS will feel homely.