Wine is the only stable way in the free and open-source world to install Windows 10//7/xp applications on Linux operating system. However, not much user friendly. Thus to make it easy to use and simplify the process of installing Windows apps “Bottles” is here.

Of course, Linux operating systems in today’s world don’t deprive applications. There is one almost for each task, yet couldn’t compete with the app database available for Windows. That is the reason why many users intermittently are looking for the best and most stable way or free software that allows running Windows applications on Unix and Unix-like systems, including GNU / Linux and FreeBSD. And unfortunately, there are no options except WINE.

However, Wine’s interface has never been particularly friendly because of the command line, especially for those who do not have advanced knowledge of how to configure it. Hence, to mitigate this issue to some extent Bottles comes in, which is nothing more than a simple interface that makes Wine easy to use and also makes available re-implementations like Lutris and Glorious Eggroll.

Perhaps, you should not expect some drastic change in terms of installing Windows applications or games behind its GUI layer, it still uses the same Wine, not compatible with many Win software. Of course, execution of installed apps and games will become easier with Bottles.

How to install Bottles on Linux such as Ubuntu

You can install Bottles on almost all major Linux operating systems such as Ubuntu 18.04/21.04/20.04, Fedora, Linux Mint, CentOS, AlmaLinux, Elementary OS, Arch such as Manjaro, and others. Because “Bottles” is officially distributed in Flatpak, AppImage, Deb, and Snap formats. It is also present in the Fedora repositories in RPM format and can be installed on Arch Linux via AUR. Elementary Users can get it directly from their App center.

The best way is to use Flatpak, you can use any of them, here are the steps to follow-

Commands for Ubuntu & Debian based Linux including Linux mint:

For those who are using CentOS, RHEL, AlmaLinux, Fedora & Rocky Linux

To make sure the proper integration of Flatpak, reboot your system once-

Once the Flatpak is set up on your Linux, we can go for the command to download Bottles packages from the Flatpak repo to install it on our system.

Learn more about the setup process from the Official Bottles Doc website.

Go to the Application launcher and search for this software, as you see the Bottles icon, click it to run. It works pretty straightforwardly. When the application is opened for the first time, the welcome window is displayed and it will begin to download the latest version of DXVK that is available to you. Let it download and complete the setup process.

Once the additional packages needed by the Bootles are installed, the next step is to set up an environment based on Wine to run games, and applications or carry out a custom configuration.  Let’s say we want to install Adobe Reader on our Linux system using Bottles. For that assign some name to your environment, here we are giving h2s, you can give something else after that select Software and click on Create to set up the corresponding environment.

With the help of bottles, the user can use a different configuration for each application thus allowing issuing dedicated environments as per the app requirements. In addition to selecting the version of Wine and DXVK, you can enable the ACO compiler for AMD Radeon graphics, choose the timing to improve performance, override DLLs, and install dependencies such as Visual C ++ and versions of Microsoft’s .NET framework. 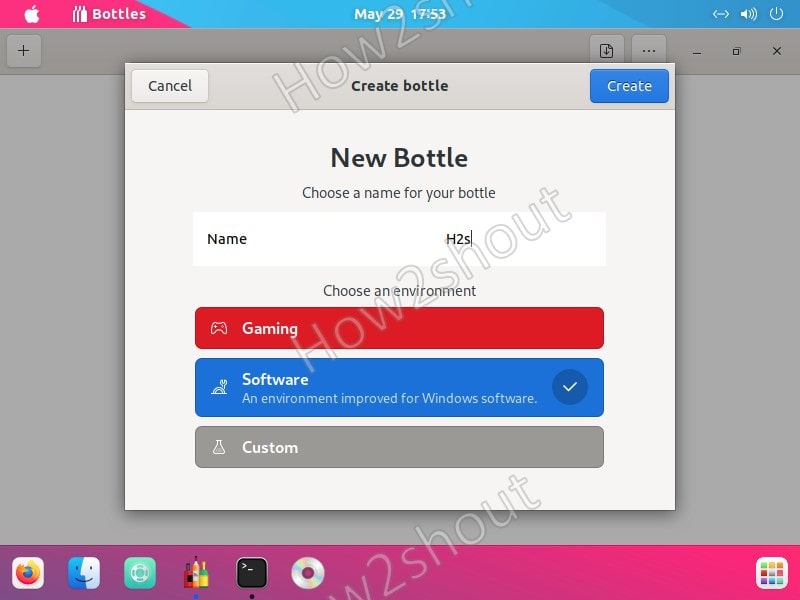 Open the environment you have created and click on the Run.exe button. This will open File manager, select the Windows application executable file available on your Linux system that you want to install, and click on the Open button. You will get the installation wizard of the particular software you want to set up using Bottles. For example, here we installing a TagScanner application that is available only for Windows Operating systems. 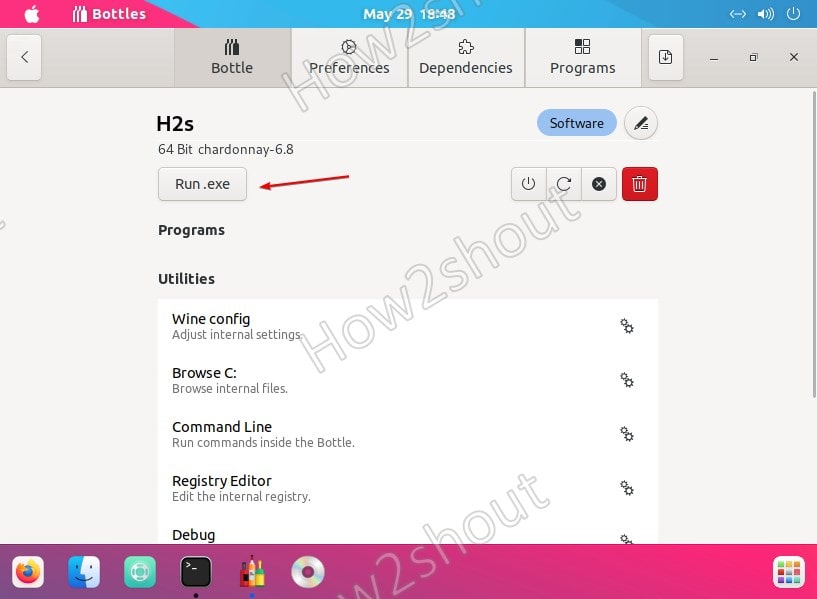 Once the software or game is installed, the same will appear under the Bottles’  program Tab. You can select the three dots given for each installed application to change the launch options or uninstall them. 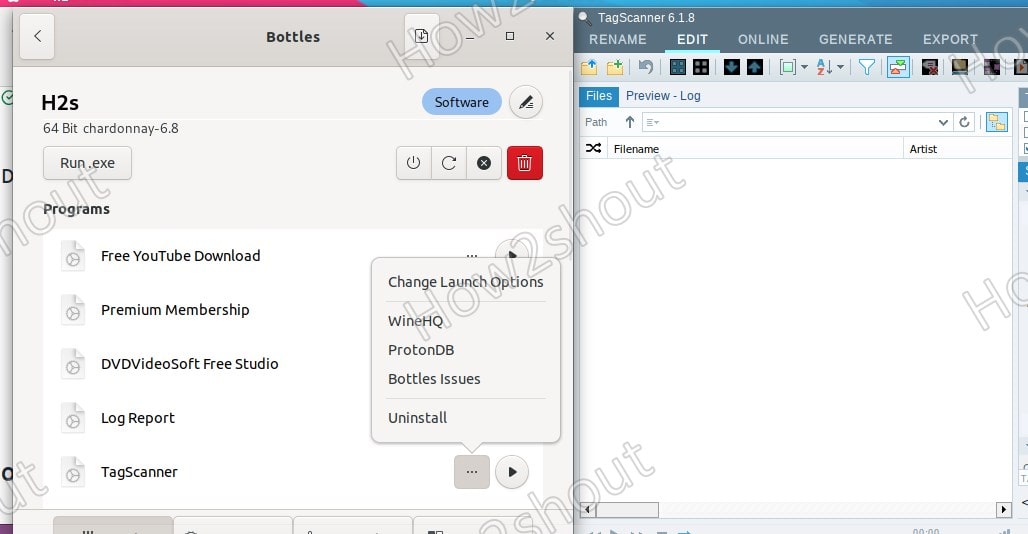 We didn’t have any problem in installing TagScanner, thus thought to try Bottles further, we also set up the Bitnami WAMP application on Linux using Bottles but it didn’t work properly. In terms of games, we tried The Elder Scrolls: Oblivion, it worked well but the latest high-end games and software require didn’t work as they must be such as Office 2016. Therefore, using Wine there is no guarantee that you would be able to install each & every Windows 10/8/7/xp on Linux without any problem. However, Bottles makes it a little bit easier by providing a Graphical user interface to the dull command-line one.

As we have seen that Bottles is nothing but a convenient way to manage Wine, its dependencies, Settings, and applications installed using it in a more than interesting Graphical interface without great complications. Hence, the use of Bottles will be an interactive way to play Windows games that are not present on Steam and software that cannot be installed on Linux. One thing needs to be noted – there is no guarantee that everything works properly.