Learn the commands to install and configure Ansible on Rocky Linux 8 or CentOS to automate the process of installing and configuring multiple Linux servers simultaneously.

If you have to manage multiple Linux servers then manually configuring and installing software on each of them is not only a time-consuming but also a labor-intensive task. Thus, Automation or orchestration is used in such environments.

There are already well know applications available to perform orchestration for server systems/data centers such as Ansible, Puppet, Chef, and a few others. Well, here we learn about Ansible and how to use it to centrally manage multiple servers for installing various packages; code deployment, network configuration, cloud management, and much more.

Ansible is an open-source project sponsored by RedHat, thus if somebody wants, support and a graphical interface for Ansible they can go for the paid additions Tower’offered by RedHat. One of the biggest advantages of Ansible is the ready-made “playbooks” that are made available on GitHub.

Ansible works in the push procedure and does not require any further installation on individual systems besides SSH and Python. Compared to Chef and Puppet, the management and use of Ansible are easier,

The steps and commands given here to install Ansible are also applicable for AlmaLinux and CentOS 8.

On your Rocky Linux 8 server or desktop, go to the command terminal and first run the system update command where you are planning to set up Ansible.

Install Ansible on Rocky Linux 8 is available in the EPEL  repository while other dependencies can be resolved and installed through default repos- baseos and appstream. Thus, enable EPEL on your Linux using the default package manager-

Now, run the main Ansible command that will fetch and install its packages along with other requirements such as Python.

Something this will be the result if everything is working fine-

The servers which you want to manage using Ansible must have SSH installed and port 22 opened in the firewall to access them from other systems such as the one installed with Ansible.

Here we are using Ubuntu, Debian, and CentOS as servers that we will use to configure using Ansible. Thus, to install the SSH server and open port 22 on them, you can use these commands.

to allow port 22 in the firewall-

For RHEL or CentOS

So, here to perform this tutorial we have three servers Ubuntu, Debian, and CentOS, here are the IP addresses in our case.

To install packages or perform some deployment on a remote target server, create a pair of SSH keys on localhost and then push them on each remote server so that we can manage them using SSH.

Simply type and hit the Enter key multiple times until the generation of keys is not done.-

Note: Replace h2s with remote servers’ sudo users or use the default root. Also, replace the Ip-address with your server’s.

Now, on each server run the below command, so that we can run commands with sudo on them using Ansible but without entering a password.

In Ansible, we create a file where we will define all the remote hosts or target systems that we want to manage. We can also create a group of hosts, for example, one group is a Web server that only contains a remote system running some web servers such as Apache, and the other can be a group of Mysql running a database server and so on. The Inventory file is also important because using it the command, modules, and tasks in a playbook will operate.

So, as here in this tutorial we have three remote servers, let’s add them to the Ansible host file.

If you don’t want to create any group then simply paste your remote server Ip-address or domain name there in the file, whereas for creating a group you have to specify that before adding Ip-addresses. You can edit the default Ansible inventory file values that would already have some examples or add your own at the end of the file.

Here I am adding two servers for a host group identified by web servers and one server will define as an individual.

In the screenshot, you can see-

It is an ungroup server

If you are using some server not with the default 22 SSH port, for example, a server running on Docker then we can also define that with the Ip-address. Example-

⇒In the above command replace the IP address, remote-server-username, and port number and add it to the inventory file. 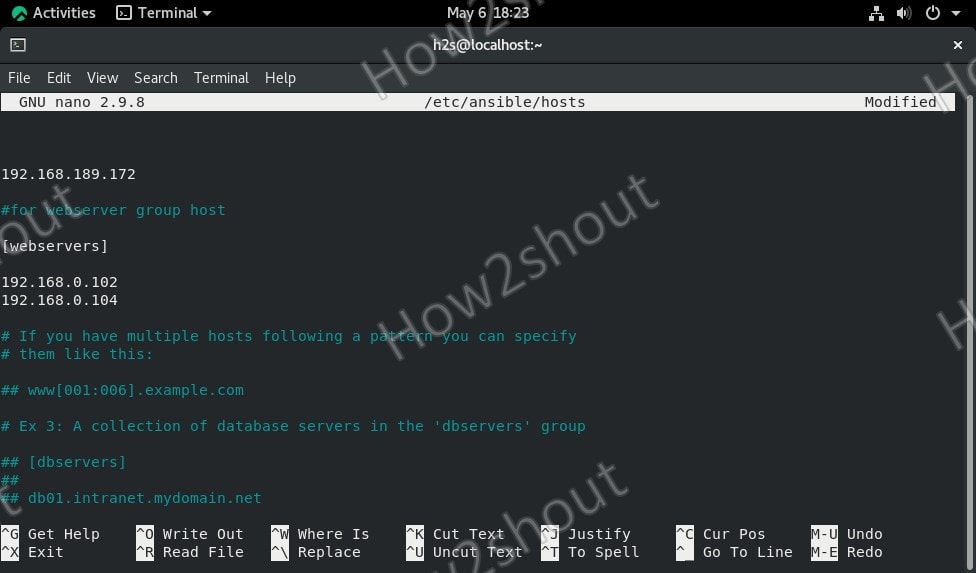 To save the file just press Ctrl+X, Type-Y, and hit the Enter key.

As we have created the inventory file successfully, let’s check whether our Ansible could ping all the added servers or not, for that-

To ping a group of hosts-

To ping a single server

Now, let’s say you want to install an Apache web server on one group of servers you have defined in the Inventory file. As here we already named one webserver, thus we use that, you can use whatever name you have given to your group of servers.

For example, running the update and installing the apache server on remote Debian and Ubuntu systems simultaneously. 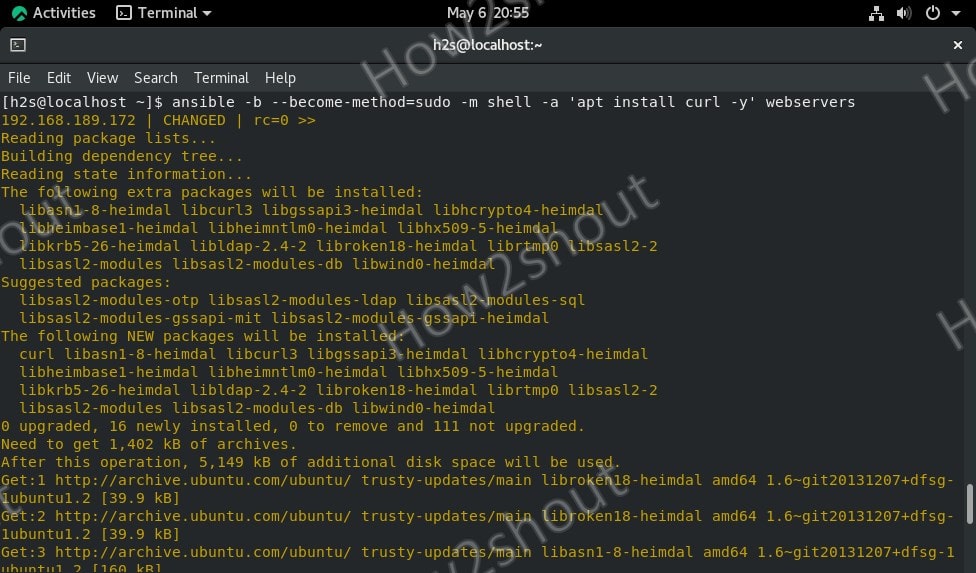 For ungroup hosts, you can use their IP addresses, for example-

The same above command can be used for other purposes, just replace uptime with the command that you want to execute on a remote server and also change group-name/IP-address.

For more information refer to the official Documentation.