FORTRAN is the abbreviation of Formula Translation. This high-level language was designed for science, engineering problems, or those problems in enterprise management that can be expressed by mathematical formulas, and its numerical calculation function is strong.

It was proposed in 1954 and officially used in 1956. It has a history of sixty years until 2021, but it is still enduring. It has always been the main language used in the field of numerical computing. However, it has also been an object-oriented programming language since 2003, which is used in particular for numerical calculations in science, technology, and research.

The GNU version of Fortran is known as GFortran, a GNU Fortran compiler, which is part of the free GNU Compiler Collection (GCC) for Fortran 95/2003/2008/2018. Learn more about it on Wikipedia.

Here we will learn the steps to install GFortran’s latest version on Ubuntu 20.04 LTS Focal fossa to start learning this programming language.

Make sure you have an updated system and for that run the below-given system update command that will also rebuild the repository cache.

The default base repository of Ubuntu 20.04 LTS offers 5 to 10 versions of it, so if you want to install any of them, can use the appropriate command given below:

For Gfortran Version 11 and other latest one in development:

However, currently while writing the article Gfortran version 11 was not available in the default repository of Ubuntu 20.04. Hence, if you want that then can add a PPA. 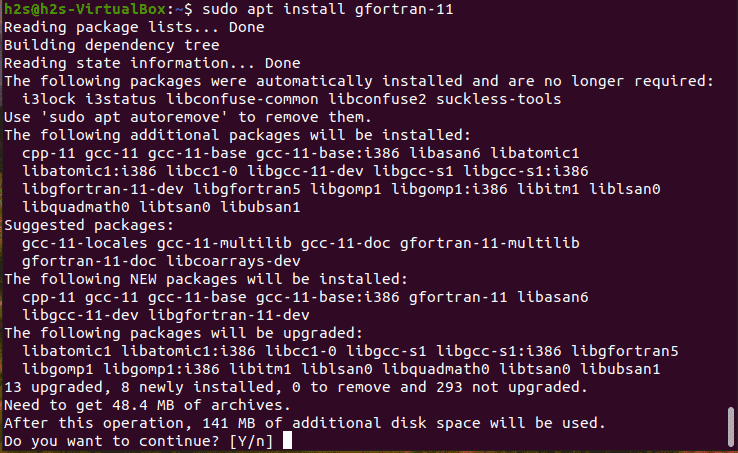 To check the installed version:

You can replace the 11 with the version in the above command you are using.

Using the below-given code we will ask a user to enter two values A and B after that system will automatically find the find greatest common divisor for both the number using the Euclidean algorithm.

Here we are using version 11:

Note: you can change the youapp with whatever name you want to assign your output file:

In this way, we can install and start compiling our Fortran codes on Ubuntu Linux operating systems. Learn more about this language at its official wiki page.