Centos Linux 8 server or desktop which would be out of the shelf by the Redhat next year becomes a topic of apprehension for some users or administrators. However, those are on CentOS 7 they don’t have to worry yet because still, there is a time, as it will reach to end of its life in 2024.

Well, one of the popular alternatives which are available to switch the CentOS 6 or 8 is the Oracle Linux, which is free and works with the same binaries used by the CentOS after all both are RPM-based and descendent of Redhat.

If you are worried about your installed applications and packages on CentOS 8/7/6 Linux in the process of migration then you don’t have too much because most of them will be intact as they are, even after switching to Oracle Linux.

Let’s talk a little bit about Oracle Linux, it is free to download, use, and distribute (even source code) operating system based on RedHat that’s why it is compatible with most of the binaries of RHEL or CentOS. Even enterprises can use it in a production environment free of cost without any obligation from Oracle. With every major release of  Red Hat Enterprise Linux (RHEL), Oracle also released its own therefore the latest version of Oracle Linux is 8 which in CentOS about to end in 2021.

The updates released by the RedHat, usually available on Oracle Linux within five days, claimed by the Oracle.  While migrating the users can choose the kernel of their choice supported by Oracle, well there are two, one is the popular Unbreakable Enterprise Kernel (UEK) for Oracle Linux and the other is the Red Hat Compatible Kernel (RHCK).

We can choose what kernel should be there once the migration process will be completed. Let’s see the steps.

As CentOS 7 maintain its cycle with the LTS version of RHEL 7. Thus migration of that is out of the question. Therefore, only two kinds of users will be interested in this, one who is on 6 or 8 versions of CentOS. Here, we are using CentOS 8 Linux for doing this tutorial, however, the steps will be applicable for all three versions 6,7 & 8. For more information on this, you can go through the official GitHub Page of Oracle.

Note: You can even –Migrate your CentOS 8 Linux to CentOS Stream

First, run the system update and upgrade command which will not only update all installed packages on your CentOS Linux but also let them achieve their latest state.

The below-given command will download a script to smoothly migrate from CentOS without much hassle with commands and all.

The migration script which we have downloaded from GitHub, here we are going to run the same, it will automatically identify the system and switch CentOS Linux 6, 7, or 8 to the equivalent version of Oracle Linux. I mean CentOS 7 to Oracle 7, CentOS 8 to Oracle 8.

Wait for few minutes to hours, depending upon the applications installed on the existing system that you are intending to migrate, the process will take time. The script will not only SWAP the repository of CentOS with Oracle but also reinstall the packages to make them compatible.

Once the switching from CentOS Linux Oracle will be done, the notification for the same will appear on the command terminal screen. 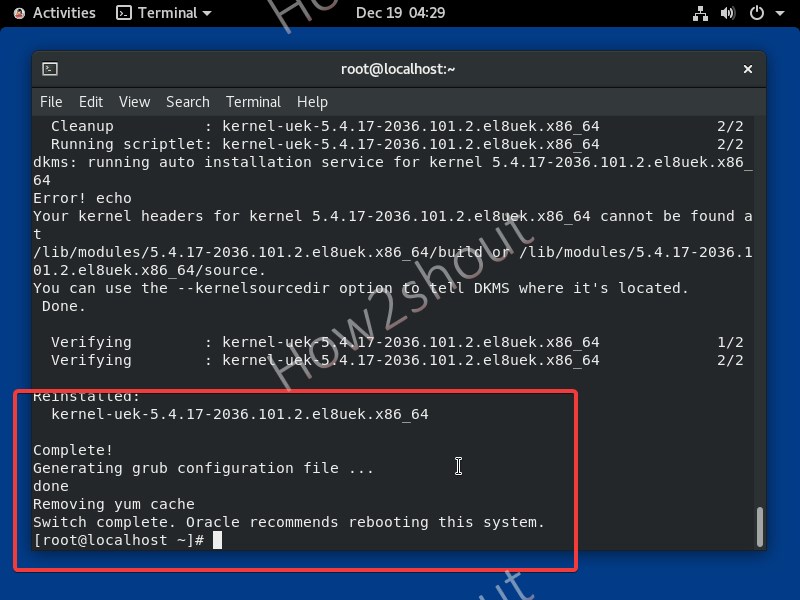 As the process will also install the Unbreakable Enterprise Kernel -UEK by default for the CentOS we have just migrated. So to check all the available Kernels and which one is the default.

The above command will list all the available kernels.

To see the default one, run

And the default one will be UEK from Oracle.

(Opiotnal) in case you want to change that with any of the other available ones then run:

Replace kernel-version with the available one such as 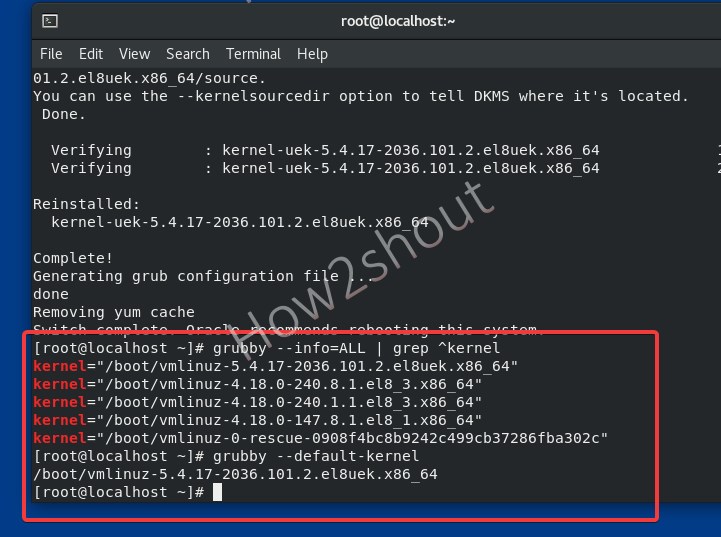 Once, all the above-needed things are done, simply reboot your system. The command for that is 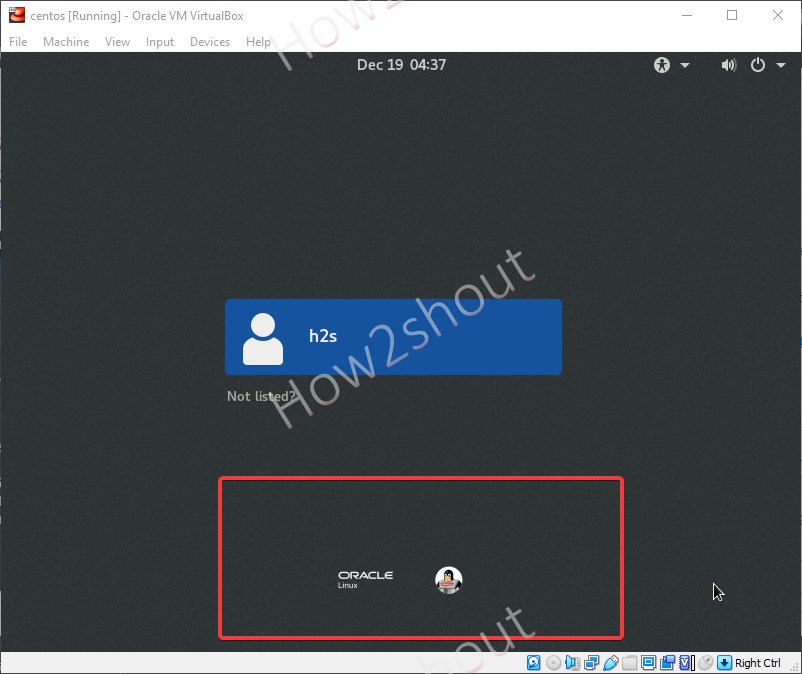 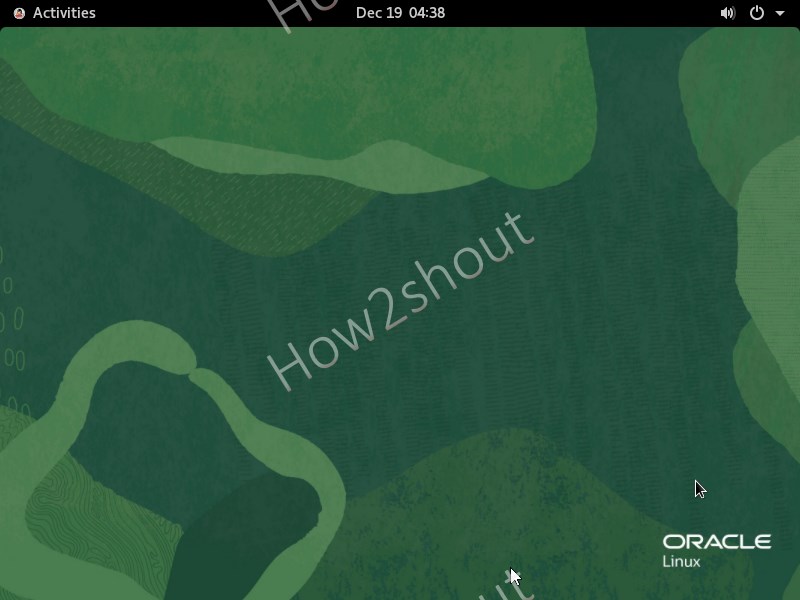 In our case, the result was: 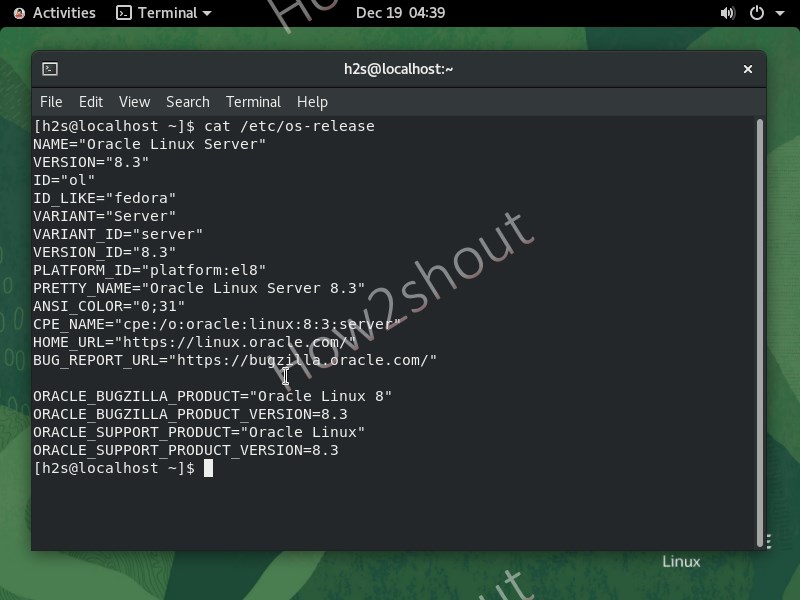 1 thought on “How to Migrate CentOS Linux 6, 7, 8 servers to Oracle Linux”