Firefox browser’s Kiosk Mode on Ubuntu or other Linux platforms such as Windows and macOS is a feature that provides the ability to run firefox with a single webpage or site in fullscreen mode so that the user can only interact with what is there on the browser set by the Admin.

Earlier to enable a Kiosk mode on Firefox we needed some add-ons, however since Firefox 71 that has been changed because Mozilla has integrated this function into its browser. The kiosk mode is intended for use at public information terminals and allows operators to hide menus and controls. In contrast to the full-screen mode, the control elements of the browser cannot simply be shown nor can the mode be exited the user.

Here we will see the command to activate Mozilla Firefox Kiosk and how to turn off the Super or Win key and other shortcuts in Ubuntu to make sure, the user couldn’t exit the Kiosk accidently.

The steps given here will not only work on 20.04 LTS but also for Ubuntu 18.04/19.04/21.04 including Linux Mint, Fedora, CentOS, Manjaro, Elementary, etc. however process of disabling the shortcut key of the keyboard will be different.

You all would be familiar with the process to open Terminal in Ubuntu, however, if you don’t then simply use the keyboard shortcut i.e Ctrl+Alt+T. And also don’t forget to run the system update command.

Although all Ubuntu versions and other Linux distros come with Firefox out of the box, however, in case you don’t have or accidentally deleted it then here is the command to install firefox.

Now, run the command to start and enable Kiosk full screen mode on Ubuntu. As the firefox command is in our system path, thus we don’t switch to the installation directory like in Windows.

Now, in the above syntax replace the URL with the website or page that you want to display on Firefox while running in Kiosk mode. For example, I want people to surf how2shout.com only, thus the command will be: 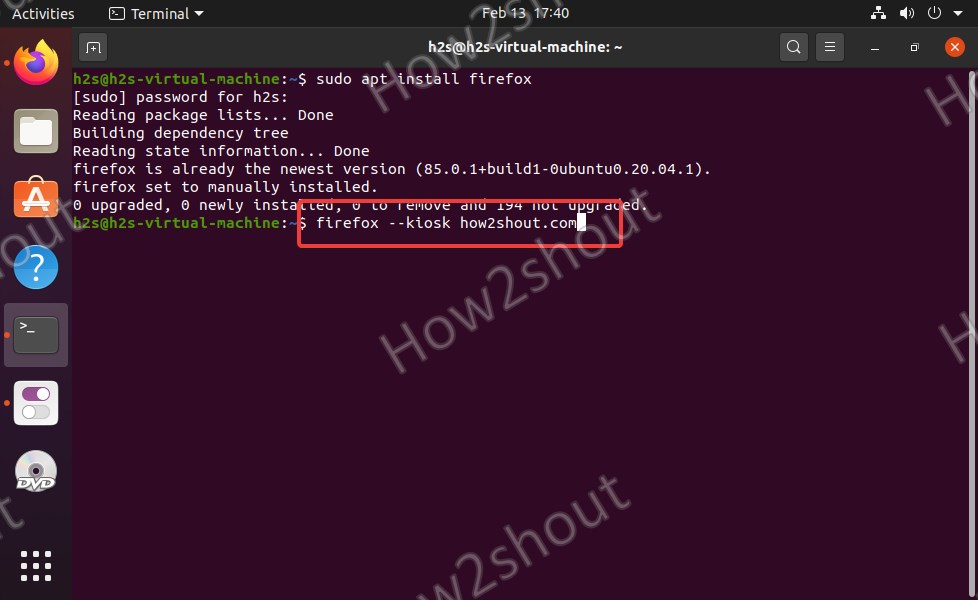 To exit the Kisok mode of Firefox simply press Alt+F4.

5. Turn off Win/Super key and other shortcuts

Now, the thing is, after entering in Kisok mode, if we press the Super key or any other shortcut on Keyboard, the system will automitacily exits the browser full sceen mode of Kiosk and gives access to other thing of the OS. Thus, in such a situtation, we can use Gnome Tweak to disable Win shortcut key and Ubuntu’s Keyboard Shortcuts settings to turn off other system shortucts.

Once the installation is completed open the Tweaks tool from All Application. Then go to Keyboard & Mouse, select Addtional Layout Options. 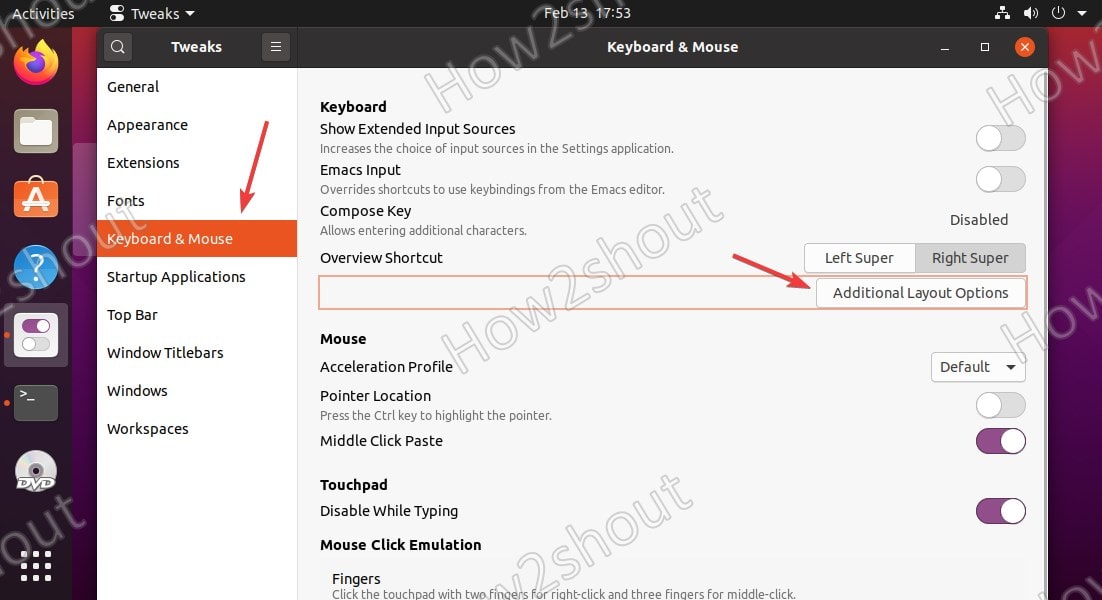 There select Alt/Win Key behaviour and then “Meta is mapped to Win“. 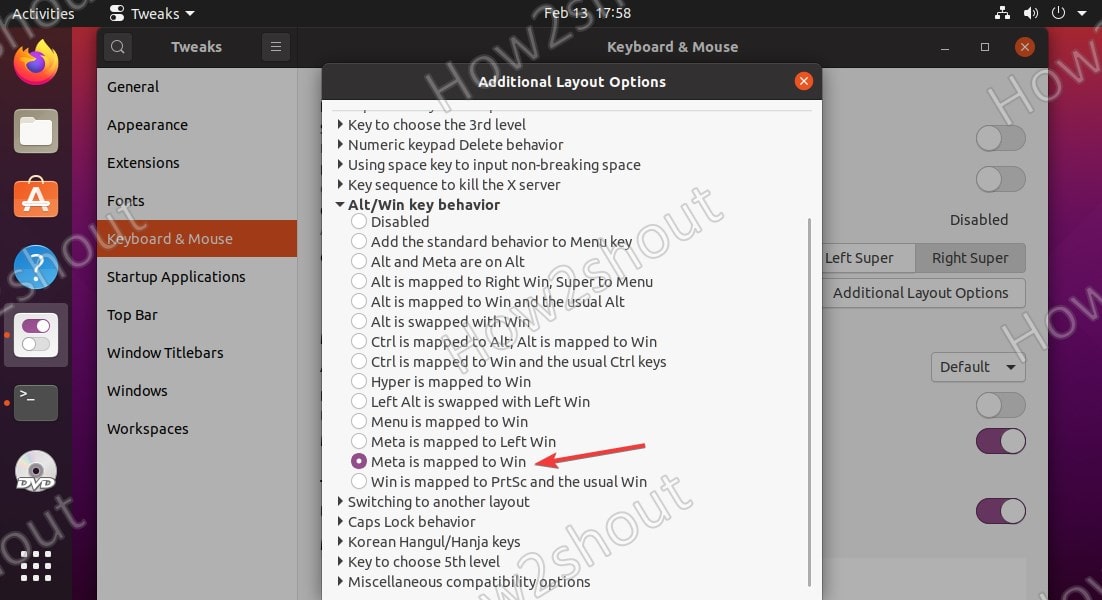 Now, to disable other system shortcuts, go to System Settings, select Keyboard shortcuts then one by one disable all shortcuts, by clicking on them and pressing backspace key. And then click Set button. You can even set your own custom shortcut to exit window that will also work to turn off or exit Firefox Kiosk mode. 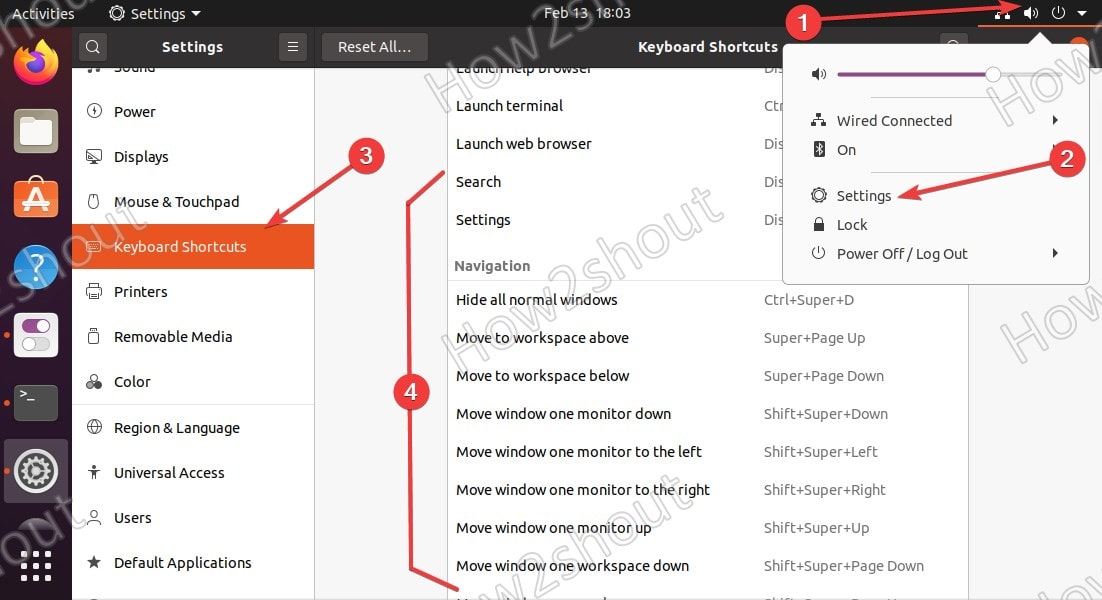 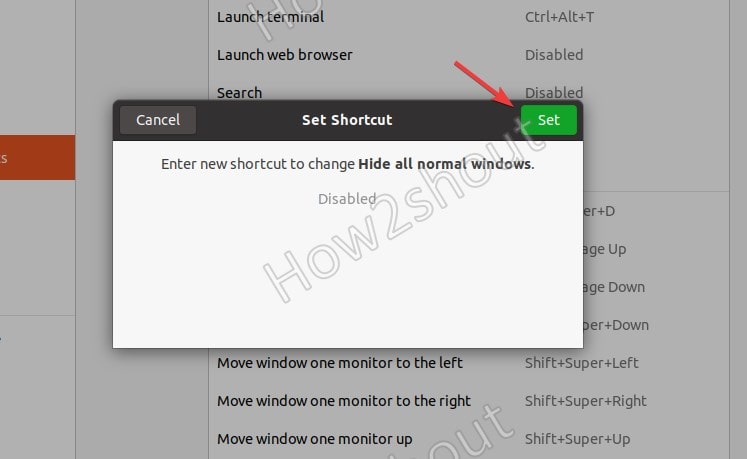 2 thoughts on “How to start Firefox Kiosk Mode Ubuntu 20.04 LTS”