Podman is promoted as an alternative to Docker that advertises as a tool compatible with Docker Images. Also, it offers a command line that is identical to Docker and is intended to simplify the migration from Docker to Podman for both users and programs. Under the hood, however, the two container tools are very different. Podman is a daemon-less tool instead its uses runC container runtime process where Docker uses a daemon to manage all resources.

Developed by Redhat this container tool was originally planned as a debugging tool for the CRI-O container engine, which is specialized in Kubernetes, in order to simplify certain tasks for application developers and administrators of Kubernetes clusters. Since then, however, Podman has grown into a comprehensive tool for container management. Developers can easily install it from major software sources in Linux distributions such as Fedora, Arch Linux, and openSUSE Tumbleweed.

Here we learn the steps to install and use Podman on Rocky Linux 8 or AlmaLinux 8 using a command terminal to manage containers.

To get a graphical user interface to manage Podman containers and servers, use the enable pre-installed Cockpit Web console on Rocky or AlmaLinux.

To ensure all the packages are available on your Rocky or AlmaLinux 8 are up to date run the system update command.

The packages to install Podman are available via the default system repository of these two RHEL based Linux operating systems. Hence, just use the DNF package manager to install this Podman.

Get Podman Compose on Rocky or AlmaLinux 8

Well, those who want to use Docker Compose implementation with Podman backend to make it run docker-compose.yml unmodified and rootless or create a new one can use the given command. In short, it is a drop-in replacement for docker-compose.

Once the installation is completed to check which version of Podman you have and whether its service running without any error.

Well, we can use Podman without running it as a service; via Socket. However, it also offers integration with Systemd services so that containers or pods can be started at system boot and managed similarly to other services that may run on the host system.

If you want to start and enable Containers services with systemd then here are the commands to first enable the same for Podman.

To get the system information using it, run:

To use docker as a command tool instead of Podman. This means you can use the familiar docker command while underlying Podman will be executing.

will give you the same result

The good thing is we can directly pull the Images of various Apps available to create Containers in the Docker Hub library using Podman. Also, having an identical command line, it is easy for existing Docker users to manage Podman-created containers.

To search and pull any Image, let’s say Ubuntu

For creating a container using the downloaded image, use:

h2smedia is the name of the container we want to create whereas ubuntu is the Image name we have downloaded or pulled. 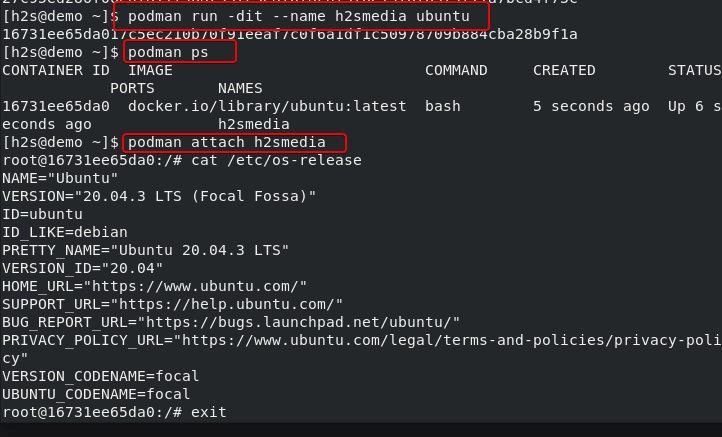 To Delete or remove the container

In case you want to remove created container then run:

Learn more about the Podman command line at RedHat Page. 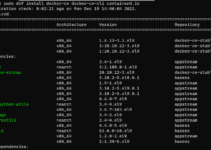 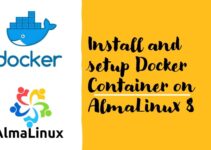