Commands to install WebVirtCloud on Ubuntu 20.04 to provide KVM with a web-based graphical user interface.

WebVirtCloud is a free and open-source project that offers a GUI web interface for the command-line KVM virtualization of Linux systems. Well, if you don’t know about the KVM – stands for Kernel Virtual Machine. It is a Type-1 Hypervisor that uses the kernel of Linux to offer the virtualization environment. Whereas VirtualBox and Vmware Workstation are Type-2 hypervisors where the Guest OS doesn’t have direct as to hardware.

To manage and communicate KVM using the tools like Virt Manager we required Libvirt, a virtualization management layer. And the same Libvirt API is used by the WebVirtCloud web UI to manage KVM.

It can delegate Virtual Machines to users. A noVNC viewer presents a full graphical console to the guest domain. KVM is currently the only hypervisor supported. Although RedHat’s Virt-Manager is already a great GUI option to connect KVM, however, the user needs to access the server physically or over an SSH session. However, this can bypass using WebVirtCloud, a python based software still in its initial stage of development. It offers an easy-to-understand interface that can be used to create, deploy, manage and delete virtual machines running on a remote server using the local browser.

Steps to install WebVirtCloud on Ubuntu 20.04

It is good to run the system update command on your system before installing any software, this reduces the chances of errors caused by the old packages.

Well, if you already have KVM enabled on your Ubuntu 20.04 then you don’t need to follow this step. Move to the next one. However, if you have don’t have, then of course go through all the given commands:

Check Virtualization supported by your CPU

If the Hardware virtualization is enabled then for Intel CPU you will get VMX in the result and for AMD – ti will be SVM.

There are a few packages we are required to set up WebVirtCloud on Ubuntu 20.04 such as Python, Gcc, Nginx, and others… However, downloading all dependencies and setting up of WebVirtCloud can be done with a single script provided by the developers of this KVM web interface platform.

Change permission to make it read, write and execute by the owner of the file:

Once the installation is completed, open the local system browser or on the remote system that can access the server ip-address where WebVirtCloud has been installed.

In the URL box- type the server-ip-address in the following format:

Note: Don’t forget to replace server-ip-address with the actual address.

The first page you will have – is the log-in one. Enter the default username – admin and password – admin, and click on the Sign-in button. 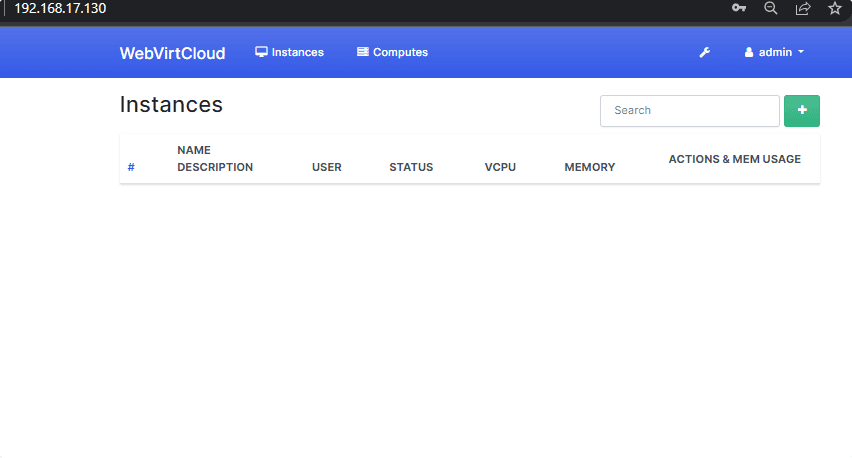 Well, Virt-Manager is one of the best ways to manage KVM machines, however, those who are interested in web-based UI can go WebVirtCloud. To know more about this tool refer to its GitHub Page.