The selfie camera is most commonly seen in smartphones but the Adcom tries to change this trend and it can be sighted in the recently launched A1 Selfie feature phone.

The Adbom’s A1 Selfie is a low budget feature phone that features 2.5D Curved Glass and variety of colors such as Sky Blue, Royal Blue, and Black, and further back with a 1-year warranty.

The company has launched a series fo feature phone those falls under the Adcom’s line of A Series that further consists of A115, A101, X4, and A111.

Speaking on the launch, Mr. Sahib Bhatia, from Adcom India said “ With the launch of A1 Selfie particularly, we have simply kept in mind the vast requirement of a budget feature phone with a selfie camera. Our product hits the spot with a good battery, good camera, good features and more importantly the right price. One more USP is that it is built from material that is fully recyclable. So no material is wasted in the manufacturing process.” 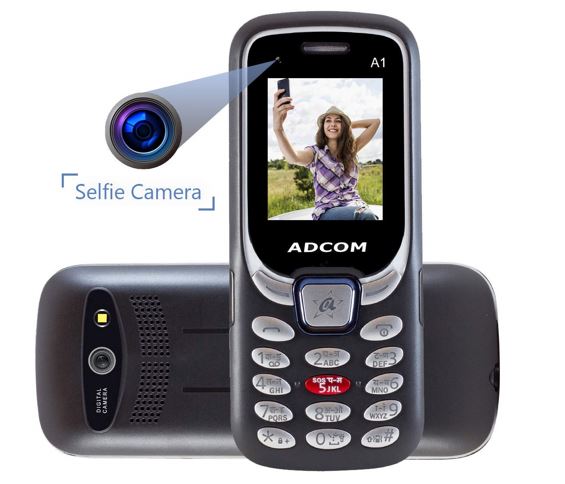 He Further added, “We have been making innovative products for our end users and the Indian market since 1996. Since the past few years, we have been on the backfoot and quitely studying the industry and it’s dynamic changes. However, we are now operating similar to a startup. With minimal budget in our hands, our goal is to simply develop and launch unique products in mobile and mobile accessories category. To be more precise, products that ideally do not have a demand in the market or rather whose demand is killed by the bigger companies and MNCs. Right now, the demand is created or rather infuenced by big brands, whose marketing budget is so vast that they change the perception of the end user, and in the meanwhile force the smaller or domestic grown brands to shut down. We are here to change that. We support family run buisnesses, and all our products are made here in India itself, and sourced from Indian factories, supporting the Make in India campaign and vision”

The entire A series is now easily available on all leading e-marketplaces such as Amazon, Flipkart, Shopclues, PayTM, and B2B panels such as Udaan and WYDR.

All of the A-Series phones are also available on Adcom’s own e-commerce store.

Here are some confirmed new features of the...
Read more
news

Battle of Smartphone in India: A survey by Numr (Infographics)

In a recent survey carried out by Numr Research...
Read more
news