On Wednesday, the Intel introduced a toolkit called OpenVINO, the toolkit is designed to facilitate the application of computer vision and deep learning reasoning capabilities to edge computing.

The OpenVINO (Open Visual Reasoning and Neural Network Optimization) toolkit enables developers to build and train artificial intelligence models on the cloud (such as TensorFlow, MXNet, and Caffe, and other popular frameworks) and deploy them to a variety of products. 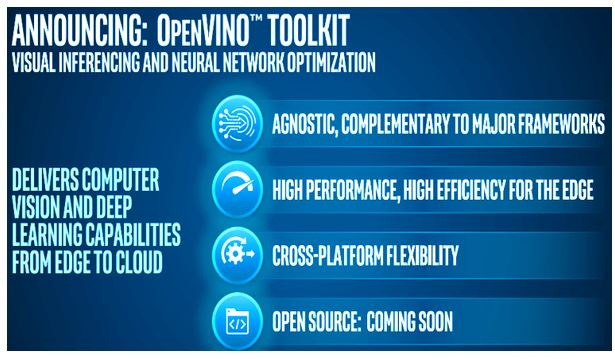 Last year, the Intel launched the Movidius Myriad X vision processor (VPU) which was a low power SOC processor for a neural computing engine, hoping to inject AI into everyday devices through its chips. The launch of OpenVINO will further promote Intel’s layout on edge computing.

OpenVINO provides a set of optimizations and a runtime engine that can take full advantage of Intel’s technology on different artificial intelligence accelerators, allowing developers to run their models on the architecture that best suits their needs, whether in the CPU, FPGA, or Movidius VPUs are other processors.

For example, in a retail environment, developers may wish to deploy computer vision capabilities in a range of edge applications such as point-of-sale, digital signage, and security cameras, which OpenVINO can easily implement.

What is Blue eyes technology and things used in it?

Just as we all know that technology has brought a very drastic change in our lives and all of us have been benefiting from...
Read more
news

ATEN, the KVM manufacturer and a provider of AV/IT connectivity and management solutions, recently announced its collaboration with BOSCH, to provide new-gen...
Read more
Technology

2020 is thought to be a big year for mobile technology transformation with Artificial Intelligence taking centre stage. It will enhance both...
Read more

The simplest way to communicate with people not in front of us is to do voice calls. But from...
Read more

What is Aarogya Setu? Aarogya Setu is an app designed and developed by the India Government (ministry of electronics...
Read more
- Advertisement -

Digitising a business process into an app takes too long, and costs too much money. Owing to these high...
Read more

The world is in the middle of a never-seen-before...
Read more
apps

Recently, the Lark technologies from Singapore has announced its...
Read more