Recently a picture loomed over the internet, and the image came up in front through a Reddit post, where many people got shocked when they came to know that there is something Windows 12 out there. 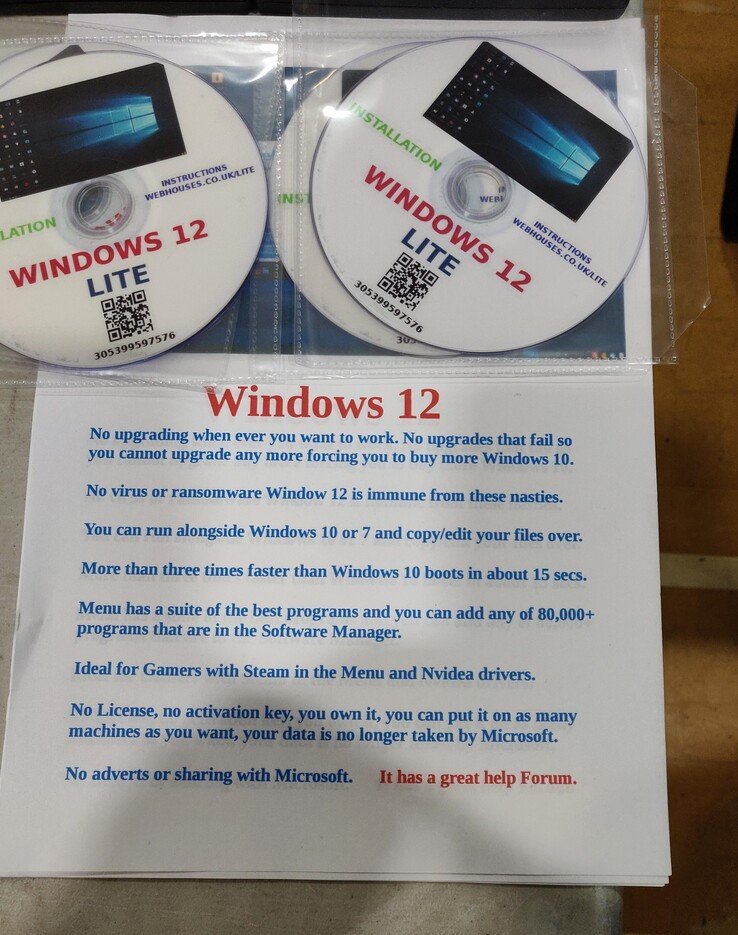 Contents show
What is Windows 12 Lite?
What is reality?
Where did it start?

What is Windows 12 Lite?

You can clearly see the above image where there are Windows 12 installation disks available with even QR code upon it. Even there is broacher available with it. Now many people got shocked by this surprise news while many people start searching for download and buying links. The version is called Windows 12 Lite, according to the Reddit post and the image we found, and also the broacher claims it to be faster than Windows 10 and to be a complete Virus and malware immune system. Also claimed to have a Software Manager where the users can find more than 80,000 third party apps for various kind of usages. The Small pic printed on disks also looks like a Windows OS as well. But if you did not know about this or may have known about this let me assure you as there is nothing to be alarmed. As this is a SCAM and there is no official release from Microsoft in the name of Windows 12 Lite or anything that sort.

Now the fun part is most of the claims in the broacher is true about this the OS with the disks, apart from the name. Actually, those disks which are being sold online and even offline at some places in Computer retail stores, do contain a full-fledged working OS within them, and that OS is actually the Linux Lite 4.8 LTS version.

Yes, it is a Linux OS and the OS is modded and patched with themes in order to make it look like Windows OS. Though most of the other claims related being faster than Windows 10, having quicker booting time, the support of Software Manager with 80,000+ apps and also being immune to viruses are actually true. You can play many games with the same Windows-like performance through Steam also. It is a very good and dependable OS from Linux and it is an LTS (Long term service) version, so you will find active community support, active update support and software support available for the product, but from the Linux Dev community not from the Microsoft.

So, if you are really interested of using this version of Linux OS, just search for it over the internet and download and install it for free, as all the releases from Linux developers are free and open source. So, selling a Linux OS copy in the form and in the name of Microsoft Windows which is a propitiatory software is a big SCAM for sure, and you should stay out of such scams.

Where did it start?

Who created this patched OS version or who started marketing this OS is still unknown, but the product was logged into a website called www.webhouses.co.uk/lite where you can see the domain is from the UK, so it is being assumed that all these started somewhere at the UK, but the particular person to blame is still unknown.

Now you may also wonder, why Microsoft is not taking any steps against Linux as based on a Linux OS someone tried to rip off their Flagship OS product, the answer for this is Linux is always Open Source software for developers and distributors since the start. So, the software those are Open Source, anyone can use them or modify them and even they can distribute them further, this is how the open-source software communities work. So, officially there are no steps can be taken against Linux.

So, you can try Linux for fun or for knowledge and also can try this specific Linux lite 4.8 LTS, to experience this wonderful free and open-source operating system, but do not spend your money for it as that is those scammers are needing from you. Just go to Linux Lite official website to download or search on the Google search engine directly.

What is the number system and its different types?

How to Find Oathkeeper & Oblivion Keyblades in Kingdom Hearts 3

How to Set up auto login in Windows 11