Recently, The Wall Street Journal published an article stating that most mobile phone manufacturers are looking for new growth from the Indian market, especially for a large number of mobile phone manufacturers from China, when global smartphone sales are gradual. However, it is difficult for Apple to open up the Indian market. The share of the local market continues to decline, and revenues are much lower than expected. What is the actual cause?

What is the current situation of Apple in the Indian market?

The Wall Street Journal visited the local bustling electronics mall in New Delhi. They found that one of the iPhone counters was very deserted and lonely, and they could only sell an iPhone in one day. In contrast, those that sell Samsung, Nokia or Chinese brands, such as OPPO and Xiaomi, can sell at least 10 phones a day. The reporter said that back to 2013, the situation is completely the opposite, the iPhone can sell as many as 80 a day.

The article also cited data from a number of well-known analysts, which estimates that India’s iPhone shipments so far this year have fallen 40% from the same period last year, and Apple’s market share in India has fallen from about 2%.  Not surprisingly, Apple’s highest income in India in the 2018 fiscal year reached $1.8 billion, which is less than half of Apple’s original goal.

In the past, Apple’s heads have always spared no effort to express the importance and potential of the Indian market, but it has rarely been mentioned. However, Cook is still objective and believes that “this is only a speed bump in the long journey, and it will be very, very good in the long run.”

Why has Apple suffered a Flat sale in the Indian market? 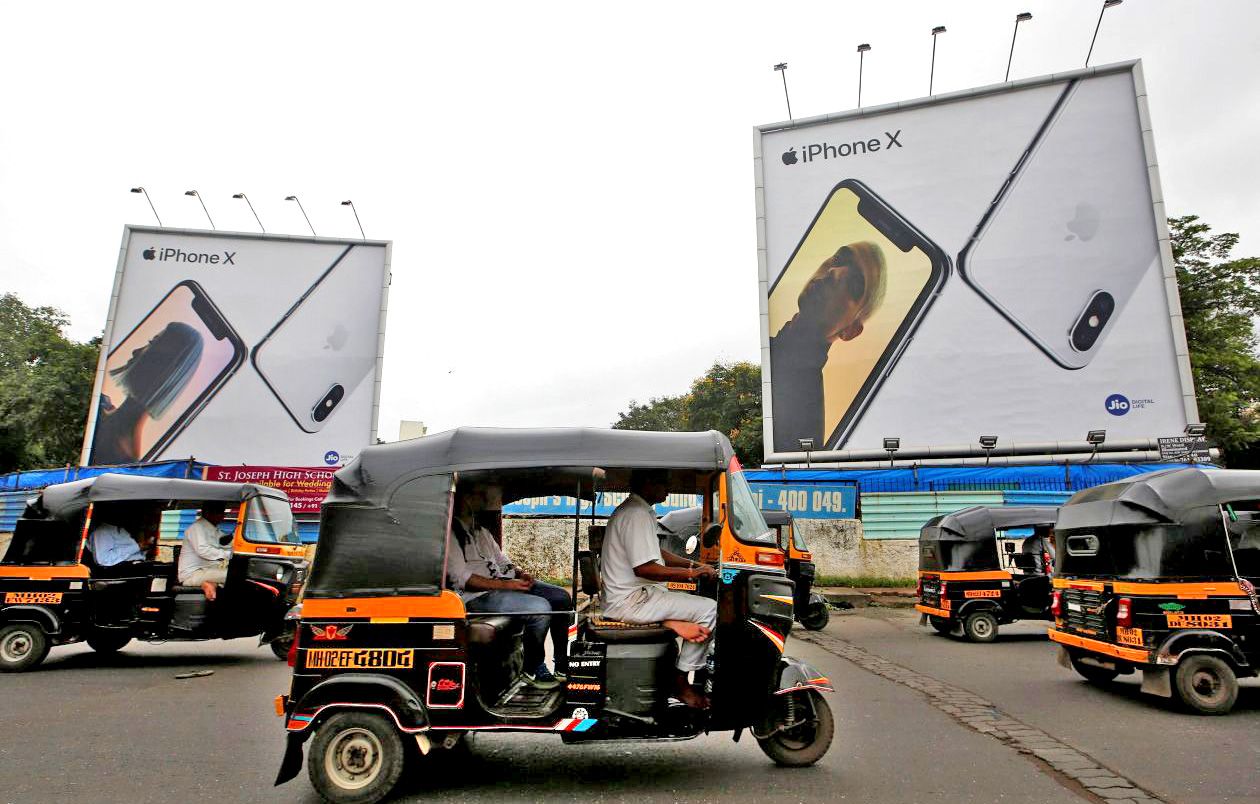 The Wall Street Journal offers a variety of reasons, but most of the reason is Apple itself.

Most Indians buy mobile phones with a budget of no more than $300, which is a far cry from the high price of Apple’s latest iPhone.

However, the iPhone’s lowest-priced iPhone in India is generally priced at around $550. Of course, there are cheaper iPhones, which are older models that have been eliminated, such as the iPhone SE, but the price is also around $250. Unlike the iPhone, the strategy of Chinese mobile phone manufacturers is very positive. Whether it is one plus, Xiaomi or OPPO and Vivo, there are many models launched in India, and many models sell for less than $200.

Not just India, the article said that consumers in many markets are quite sensitive to the price of mobile phones, including African countries, where most consumers buy mobile phones directly and choose to pay as they go.

The Wall Street Journal believes that Apple also realized that the iPhone’s expensive pricing has caused consumers to lose interest, because Apple lowered its iPhone production plan, and the final result is that the stock has fallen more than 25% since the beginning of November. Apple is also offering a substantial discount on the iPhone to boost sales. However, even the cheapest Apple new equipment, only the rich Indians can afford, dealers can only backlog of excess inventory they can not sell.

2. The iPhone does not have a cost advantage. The import tax is high.

Compared with Apple, most of its competitors, especially Chinese mobile phone manufacturers, have one of their cost advantages in being able to produce mobile phones locally in India. The price of the high-priced iPhone from China to India is subject to a 20% tariff, and opponents have to avoid this tariff.

Of course, Apple is also aware of this situation, so last year Apple set up a factory near Bangalore in southern India to assemble its cheapest model, the iPhone SE, and plans to start selling it at the official retail store. However, the taxes paid by component manufacturers for imported raw materials are difficult to reduce.

In addition, India requires that single-brand retailers with foreign ownership of atleast 51% purchase and 30% of manufacturing raw materials from Indian suppliers. Since most smartphone components are produced in other parts of Asia, this requirement for India, Apple has an insurmountable obstacle, and negotiations between the two sides have stalled.

3. Apple is not fully researched in India.

Indian competitors, especially mobile phone manufacturers from China, have made clear adjustments to their mobile phone products, such as extending battery life and introducing lower pricing. Models to meet more consumers. In contrast, Apple is indifferent.

The Wall Street Journal said that in the Indian market, Apple usually disdains market research. In contrast, Chinese mobile phone manufacturers often sign new Bollywood and cricket stars and other famous Indian characters on new models to help promote new products. Not only that, but Chinese manufacturers have also conducted extensive field investigations on the habits of local consumers in India, such as the rapid integration of special cameras that enable better self-portraits.

Apple’s work is more about adjusting sales strategies. The Wall Street Journal said that Apple has cut the number of dealers in India and regained Apple’s previous strategy of selling products to wealthier Indians through high-end shopping malls or third-party retail stores.

iPhone software features such as iMessage and AirDrop photo sharing are not very attractive to emerging market consumers. They often use Facebook and its WhatsApp instant messaging service to connect with friends, read the news and other content…

The Wall Street Journal believes that every time Apple launches, it will launch two new smartphones, which can make huge profits with huge sales and small model changes. But Apple has been reluctant to make a lot of changes to software and hardware because these adjustments will make the company’s business more complex, increase working hours and other costs, which in turn will jeopardize profit margins.

In contrast, Chinese mobile phone manufacturers to increase and survive in India keep customizing and experimenting to lure the local consumers. The article gives an example of a Oneplus, saying that one plus fully understands India’s demand for battery life because local customers often have to work long hours in places where charging is inconvenient, and commuting time in crowded traffic those might lasts for hours…

Not just India, the same is true of the Chinese market. Although Apple has added a dual-SIM feature that is popular in the country for Phone and added QR code scanning a year ago, the situation has not improved. According to data provided by research analysts, Apple’s current market share in China is 8%, significantly lower than the peak of 12.5% in 2015.

5. Apple is reluctant to change its traditional business model of selling iPhone.

In the Indian market, Apple still ranks the importance of “hunger marketing” first. Apple hopes that its own products are the products consumers are dreaming of, and this is another reason to set a price at a higher level.

One reason given by Apple is the depreciation of the Indian rupee and the problem of the Indian market network. Cook said that one of the resistances that Apple’s iPhone has encountered in India is the lack of high-speed 4G connectivity, which affects the experience of watching videos and other content on the iPhone. But after JIO that problem was already totally mitigated.

The Wall Street Journal revealed that Apple introduced the iPhone to India in 2008. The initial goal for the iPhone was to attract the wealthy Indians through high-end retail stores. The plan is to expand the target customer to the middle class by selling the phone on EMIs. By 2015, Apple’s annual sales in India increased from around $100 million in 2011 to more than $1 billion.

This caught the attention of Cook and Apple headquarters executives. People familiar with the matter said they wanted to make India the next growth market for Apple and developed a five-year plan to increase Apple’s sales in India to $5 billion by 2020.

Just as Cook believes that India must be the most promising mobile phone market, the Wall Street Journal pointed out that smartphone makers experiencing growth declines in other parts of the world are counting on saving the market by expanding the Indian market. With a population of 1.3 billion, India is the world’s largest technology market that has not yet been fully developed.

According to research firm eMarketer, only 24% of Indians currently own smartphones, and the number of smartphone users in the country is growing faster than any other country.

It is clear that there will be 1 billion new smartphone users worldwide, mainly from India and other emerging markets such as Indonesia and parts of Latin America. As the iPhone’s global sales begin to level off, Apple needs a huge emerging market. Apple’s success in attracting these consumers to buy the iPhone will determine the company’s growth in the next 10 years.

The Wall Street Journal concluded that Cook will travel to China almost every quarter, but has never been to India since 2016.