Are you looking for a way to install and run Ubuntu 18.04 Linux server on your Android Smartphone or tablet without rooting the phone? Then try UserLAnd.

Android, being a very popular operating system users are keep looking for a way to easily install different Linux distros on it. Hitherto, it was very tedious work to run Linux OS on Android but not anymore. With the help of UserLand, we can install Kali, Ubuntu, Arch Linux, Debian distros on Android in a minimal form. It provides built-in Shell and VNC sessions for a graphical experience. UserLand was developed by the team of GNURoot Debian App which was very popular before, as a replacement.

Here we will show the way to install and run Ubuntu 18.04 minimal server on an Android phone without any kind of rooting process. It helps you to learn Linux directly on your phone without voiding the warranty.

This app is available on the Google Play Store, here is the link to download it. There are no complications in its installation just like any other, open the Play store on phone either use the here given link or search for UserLAnd and when appears, tap to install it.

The moment, the app opens, you will see multiple Linux distros options along with their logos such as KALI Linux, Ubuntu, Alpine, Arch Linux, Debian along with lightweight Debian based Desktops with Xfce and Lxde desktop environment. It also has some Linux development, games, and productivity apps.  Well! here we are only about to focus on the process to run Ubuntu on Android.  Tap on the Ubuntu icon. 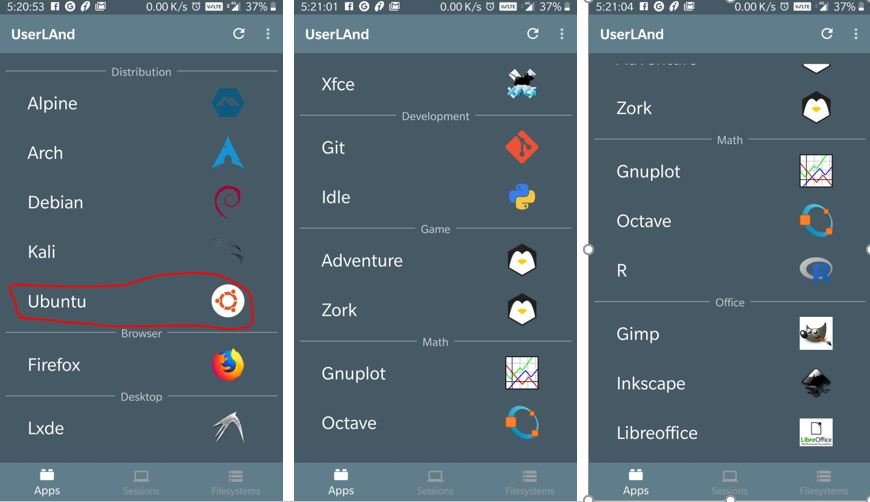 Step 3: Setup Username and Password for user and VNC

When you tap on the Ubuntu or any other Linux distros have given in UserLAnd, the first it will ask you to set up a username, password, and VNC password.

Type whatever you want and remember this will set you as a standard user of your Android’s Ubuntu operating system. Once done, tap on the Continue option. 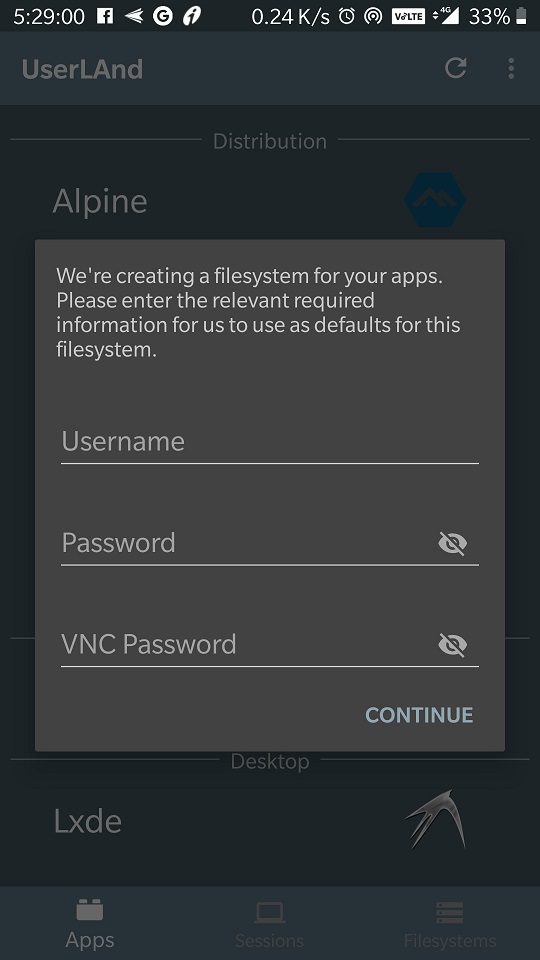 The next thing which we need to select that how we would like to connect installed Linux OS Ubuntu on Android with SSH or VNC. I would like to use SSh which is simple and from the inbuilt terminal of UserLAnd, I can easily control my Linux operating system. We will also show later in this article how to use RealVNC to connect the existing Ubuntu, KALI, or any other OS available on this Android application.

After that, it will say the files of Ubuntu to download on Android are 80MB and would like to download it without Wifi, tap continue if you want to download them on mobile data. It will take a few minutes to set up all depend upon your internet connection speed. 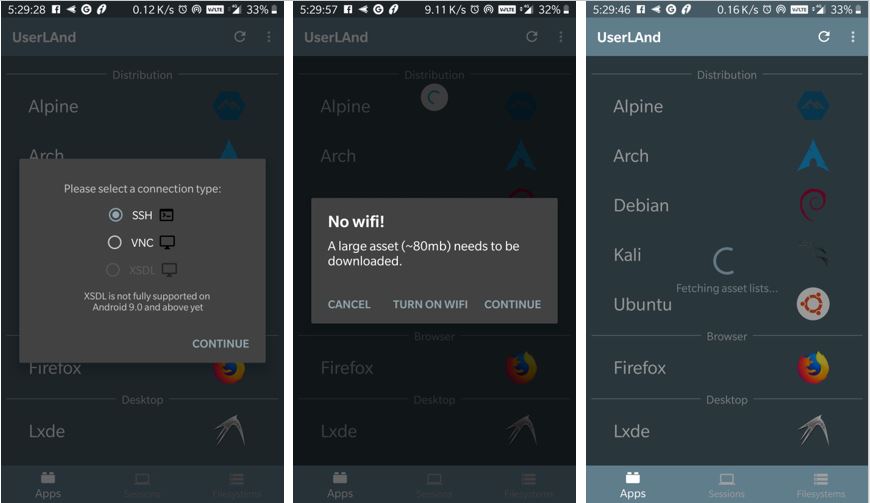 After the installation, as we have selected the SSH in the beginning, a terminal window will open. Now here just like a regular Ubuntu server enter the password you have created above for your Ubuntu image running on Android. 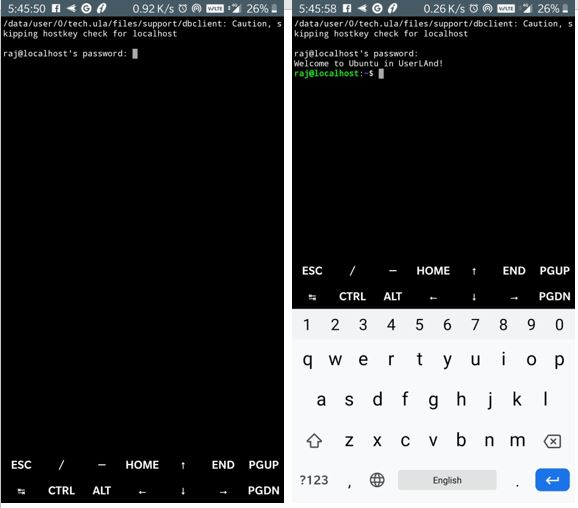 Apart from the small screen and no init boot it is just like Windows 10 WSL, you will not feel any other differences on this Ubuntu Linux image, emulated on an Android phone.

Thus, now we can use the keyboard to enter the command to our Linux. Let’s first update and upgrade all the packages of it. Run the following command 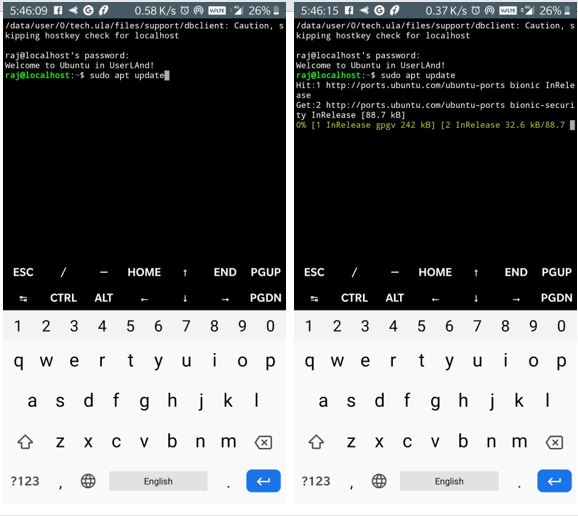 As we know by default there is no password for the root user, so to set that use the following command:

By default, the OS will have only a command-line interface and to give it some Graphical user interface, we need to install it manually. Here we are installing lightweight LXDE for Ubuntu Linux to run GUI on Android phones.

Note: Running Linux GUI for Ubuntu on Android is not recommended unless you have a high-end smartphone because it is laggy and also crashes sometimes.

Well! still for the sake of the tutorial I am telling you how to access and view installed LXDE Desktop on Ubuntu on Android.

We can use the XSDL Android app to access the GUI desktop for Ubuntu but that is laggy and that’s why decided not to use it, instead RealVNC viewer.

Note: I am installing it on OnePlus5 and it has Full HD resolution and in the above command use your resolution.

In the above step, we already have set up the Linux VNC server on Ubuntu and now it’s time to download the Android app here called RealVNC Viewer- Remote Desktop.

As our connection is not encrypted it will warn that; here ignore this and simply tap on OK.

Now in Authentication enter the password that you have created while installing the TightVNC server above. 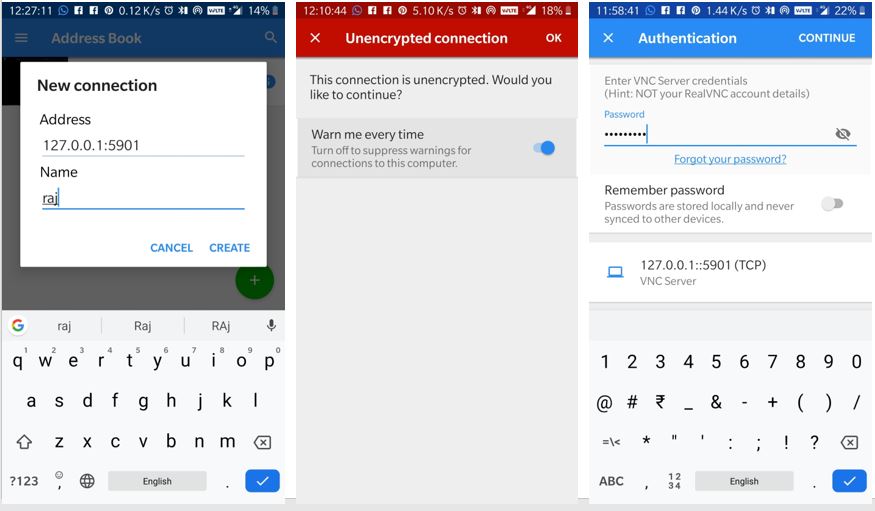 Finally, you will see the LXDE Linux Desktop environment on Android for Ubuntu which further installed the UserLAnd app on Android. 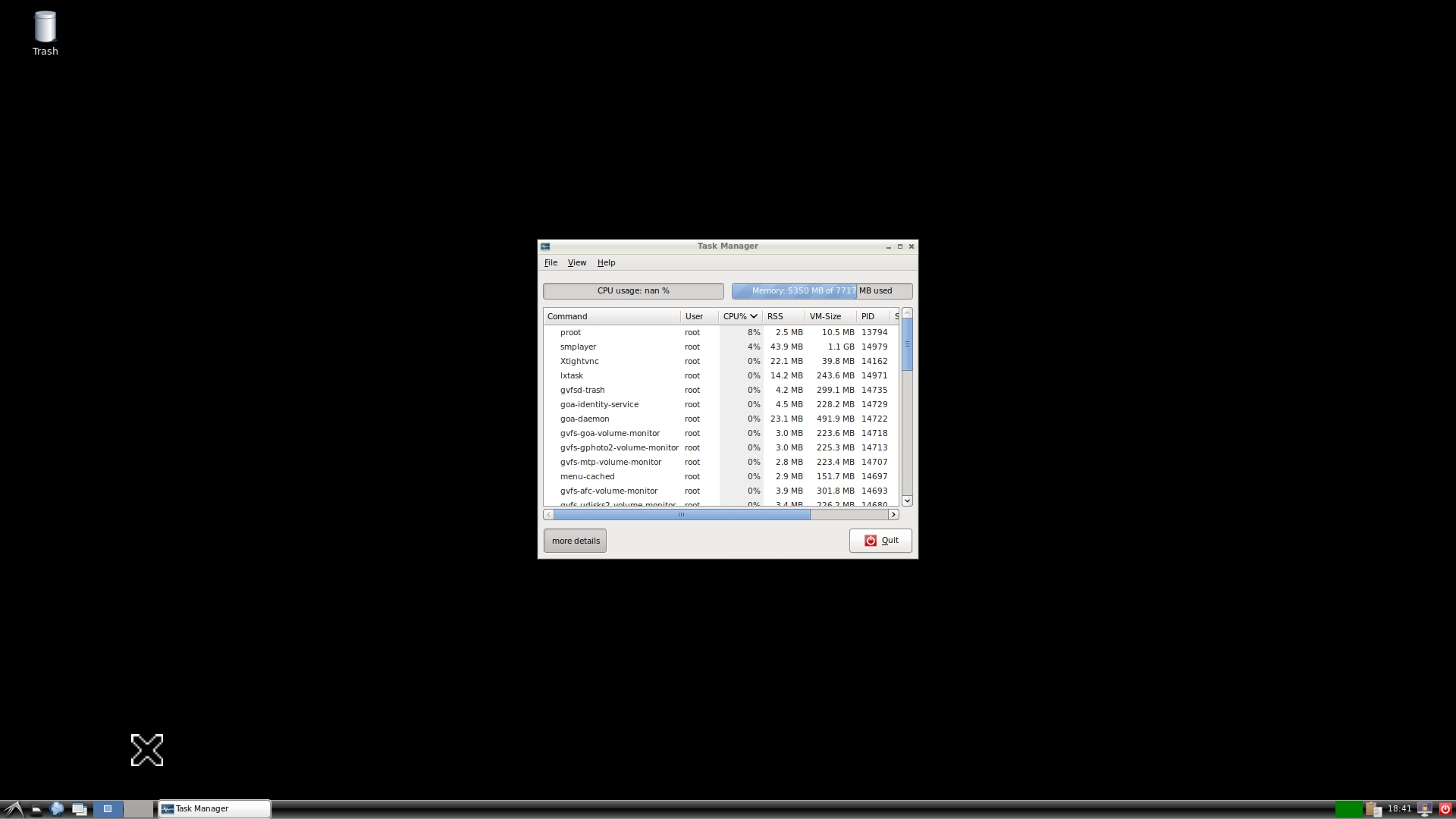 If you want to kill or stop the vncservice then use the below command:

In this way, we can use this app to have Ubuntu for fun and experiment with Linux on an Android phone or tablet.

GajShield strengthens its presence in European Markets, enters the Firewall Space in Greece

How to Optimize Your Link Anchor Text for SEO