Last week, the United States “Consumer Report” magazine found that Tesla entry model Model emergency braking distance is too long, it was rated as not recommended.

Subsequently, Tesla CEO Elon Musk acknowledged that the Model 3’s brakes did have problems and promised to be repaired through firmware.

The Consumer Reports found that the Tesla Model 3 had a brake distance that was far higher than that of the same model at high-speed emergency braking. Its 60 mph (about 96.6 km/h) brake requires 152 feet (about 46.3 meters) to brake, even 7 feet (about 2.13 meters) more than the Ford F-150 pickup. 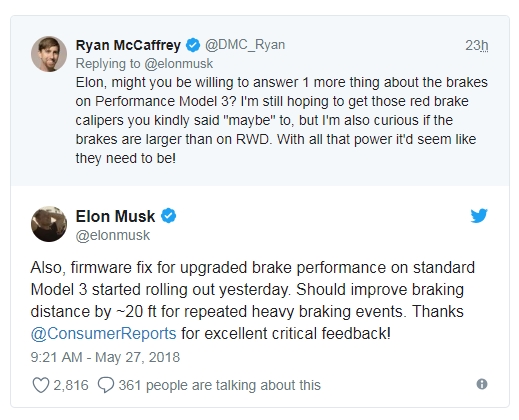 Elon Musk recently revealed on Twitter that Tesla had pushed the firmware remotely for the Model 3 last Friday. After upgrading the firmware, the emergency braking distance can be shortened by 20 feet (about 6.1 meters). Musk also thanked the Consumer Reports for its rigorous feedback.

As such, after upgrading the firmware, the Model 3’s 60 mph (about 96.6 km/h) urgently knew that it would take about 40 meters to stop. Although not excellent in the same class, it has already met the mainstream level.