SSDs (Solid-State Drive) are very common these days and are always recommended. Even though they do have higher reliability in general than hard drives, they cannot last forever. SSD stores data a lot differently than hard drives which means their lifecycle is quite different. SSD stores data in Flash Memory Cell Anatomy where each cell can store one bit or more depending on some facts that we will be discussed ahead. SSD flash cells can only be written to a certain number of times before they start to degrade. Because of this, SSD uses a technology called Wear Levelling which strategically places data around the entire SSD and decides where it is going to write or erase certain things, so that it maximizes the life of SSD by not writing to too many cells individually at once, thus maximizing how all cells will last. 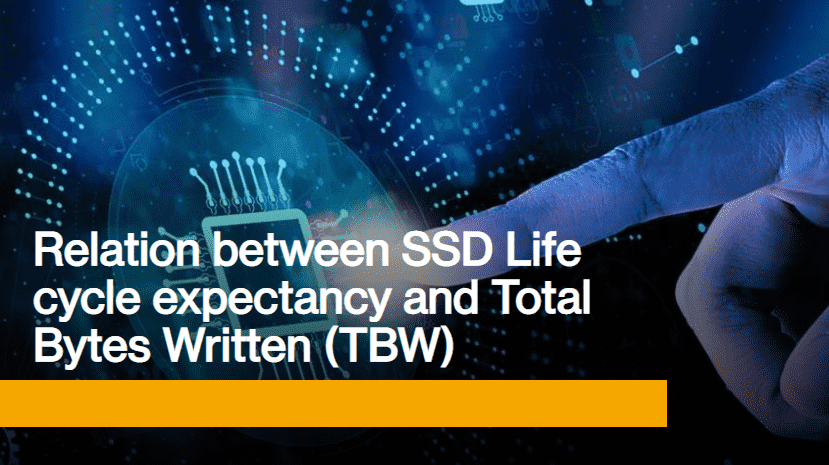 The number of write cycles per cell on an SSD depends on several factors:

There are four different levels:

The reason 3D NAND lasts a lot longer is that it is a different type of technology. Basically, Planer (2D) NAND which is a typical flash uses floating-gate transistors to store a bit and charge while 3D NAND uses a Charge Trap (except Intel which uses Floating Gate).

Because SSDs have these write cycle limitations, SSD manufacturers have created a couple of aspects that tell you how long your SSD is expected to last.

The two main Aspects seen are TBW (Total or Terabytes Written) and DWPD (Disk-Writes per Day).

TBW is probably the easier one to understand and is simply an estimate of how much data in terabytes over the course of life, the drive can handle and this is going to depend on the factors we already discussed as well as how big the drive is. A bigger drive obviously has more storage to spread the data out across on where it’s being written. That means it can usually handle way more data over its lifetime.

TBW can also be referred to as “Endurance” as it is an important aspect to look out for when buying an SSD as it indicates how long a driver can be operational and useful before needing to replace it with a new one. TBW is important because it indicates how many times you could re-write an SSD drive before it can no longer hold on to your data. It is a different way to indicate the lifetime of the device.

It basically tells you how many times the capacity of the drive can be written to the drive per day over the life of the warranty. You can use this to reverse calculate the amount of TBW by simply multiplying the number of days in the warranty with DWPD.

How to find your SSD’s TBW?

Now, when you know how the writings work, you can look up the amount of TBW for your particular drive in the specifications but you might be wondering “How do I know, how many Terabytes have been written in my drive already?” It is quite easy to find out as your SSD keeps track of this so you can see it by using the right software.

The most recommended software is:

CrystalDiskInfo: It is a well-known, free, and open-source software. You can download it at https://crystalmark.info/en/software/crystaldiskinfo/

After you download and install it, you simply click on the drive you want to select and then look for Total Host Writes where the amount in GB is mentioned. It also tells you the Total Host Reads but reading from the drive does not affect its durability, therefore it is not that important. You can compare the TBW mentioned in the specifications with the TBW already written and find out the life expectancy of your drive like the amount of TBW still left.

CrystalDiskInfo also shows you the SMART status of your drive. Smart is basically a technology for monitoring the health of the drive. SMART stands for “Self-Monitoring, Analysis, and Reporting Technology”. It indicates drive’s health status as Good, Caution, and Bad. If it says ‘Good’ that obviously means that your drive is working just fine. If it is prompting ‘Caution’, you should probably replace the drive as it might be degrading right now. If it states the health status as ‘Bad’, that could mean that the drive is in the process of failing and could die anytime. In such a situation, you should back up immediately and replace it as soon as possible. Regardless of any issue, it is always recommended to have a backup as failure can occur due to any reason and causes may not be predictable sometimes.

What about after TBW?

You might be wondering what happens to an SSD after it reaches its advertised Terabyte Written limit. Obviously, it is not going to die immediately as soon as it hits the limit. Because a lot of times, the terabyte written aspects is the warrantied durability, so that’s the amount the manufacturer is pretty sure it will get to and it’s likely to survive much past that, maybe even multiple times of the actual terabyte written. However, it is important to know that after a certain amount of writing, even if the drive still works, it is going to have more and more sectors that are failing and will need to be reallocated which means that it’s marked as no good and you are going to gradually lose more and more space on the SSD as the sectors fail.

So, if you do happen to reach your SSD’s terabyte written limit, it is suggested to use that drive only for nonessential stuff like installing games that are easily replaceable and downloadable. Try not to use it for any critical work that you might not want to take a risk with.

Even though SSDs are typically more reliable than hard drives, when they do fail, they most probably do it on very short notice or maybe without any signs. Thus, you should always have to take some kind of backup because you obviously do not want to be stuck with a broken SSD which is significantly harder to recover.

Impact of Virtual Learning on Young Minds and How they are Coping up: Pros & Cons from Industry Experts

What is a Payment Bank?