It doesn’t matter whether you are a gamer or not as everybody already knows about PUBG, which has taken the gaming world by storm, and I must say it is one of the most popular multiplayer games available for the users worldwide. Developed by a South Korean company Bluehole, the game is all about survival. You need to be the last player to survive in the arena and that way you grab the chicken dinner which is a synonym for winning the game. Even though PUBG is developed by Bluehole, the South Korean gaming company, Tencent games also have a share in the company and if you play PUBG on your mobile with PUBG Mobile, the game is a collective effort of Bluehole and Tencent games.

So, without any further delay, let’s get started with the top PUBG Mobile alternatives that you can play on your Android and iPhone, hope some of them might intrigue and satisfy your shooting binge.

If you are fond of playing Battle Royale games, you already know about our first PUBG Mobile replacement called Garena Free Fire. But the list will be incomplete without this game. Unlike PUBG Mobile, you cannot play with the team in Garena Free Fire. There are 50 players and you should be the sole survivor. Due to the small number of players, you can play a quick game in the gaps of work and you can get to ride across the big map and stay within the safe zone to not get knocked out. Either be defensive or aggressive, the sole objective of the game is to survive till the end, and defeat all the 49 players. Within the game, you can get airdrops and supplies just like that of PUBG Mobile and you can also camouflage under the grass, hide behind the trees or buildings to shoot your enemies.

Just like PUBG Mobile you can get a wide assortment of weapons and you have to choose the best weapons for every situation and just like PUBG Mobile, each weapon has its own uniqueness to fight the foes. You can customize your character to make it look exactly the way you want just like the way you can do it on PUBG Mobile. Besides the normal mode, there are also additional modes to play the game of Garena Free Fire, which includes 4-man squad, Clash Squad with 4 players aside. The game offers realistic and smooth graphics and you can play it on most devices. Due to optimized graphics, you can play Garena Free Fire, even if it is not capable of running PUBG Mobile or any other heavy game. 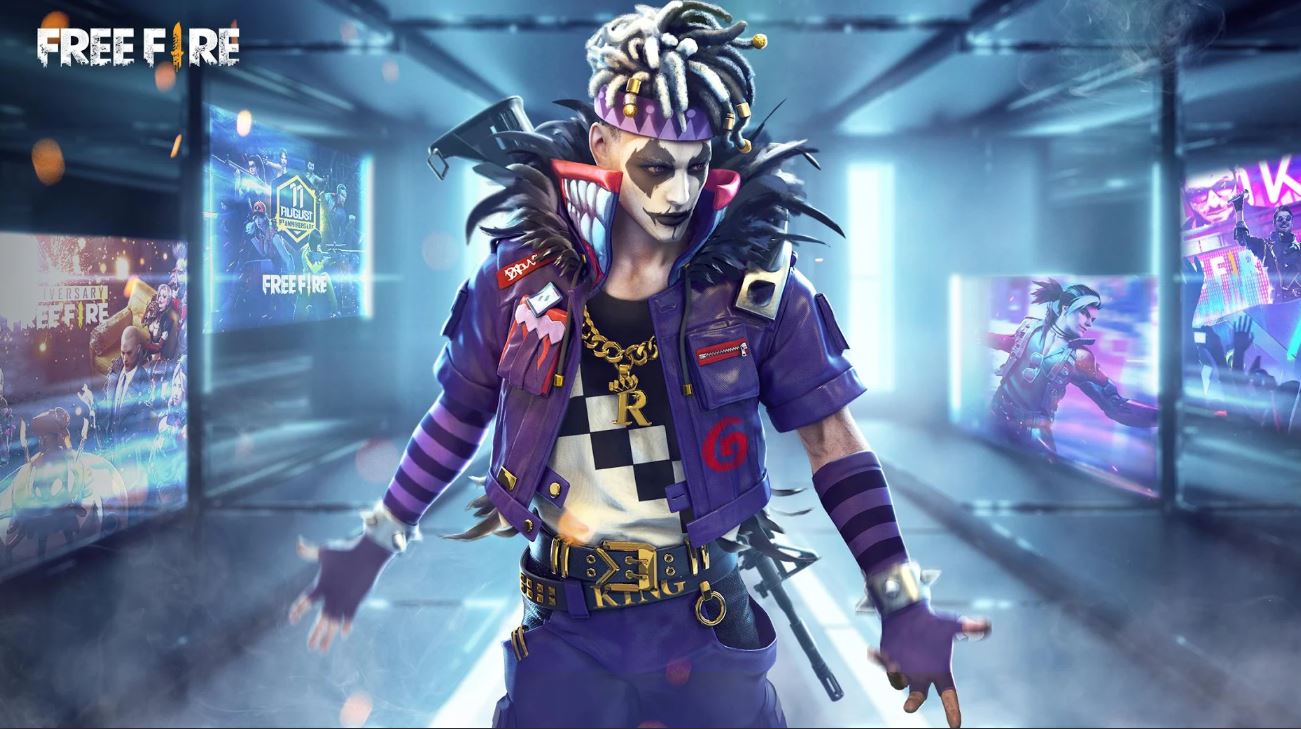 Call of Duty is a game that doesn’t need an introduction. Call of Duty offers all the action game flavors that most players lookout for and Call of Duty: Mobile includes a 100-player battle royale, five aside team deathmatch, and snipper battle. It is one of the best alternatives to PUBG Mobile. So, Call of Duty brings in everything that you want within an action game and the game delivers realistic console-quality graphics and fluid control taking the experience of the game to a whole new level. If you have played Call of Duty Black Ops and Modern Warfare, Call of Duty Mobile also brings those maps to your mobile for free to refurbish your old memories. The game is all about strategy and the only way to survive in the game till the end and make your team win is to have the correct strategy with the competitive players that you will face while playing this game.

A New season appears every month and you can also get new maps and events from time to time so that you keep reinventing the game of Call of Duty Mobile. If you are willing to get the true warfare experience on your Android, I must say, Call of Duty is the best game that you can go for. As you can find several game modes you can always choose one game mode depending upon the amount of time you have in your hand. The more you play the game, the more difficult and aggressive competitors that you face, and your shooting skills and strategy are eventually going to help you in the long run. If you want to get the true Esports experience right on your Android, give Call of Duty Mobile a try. 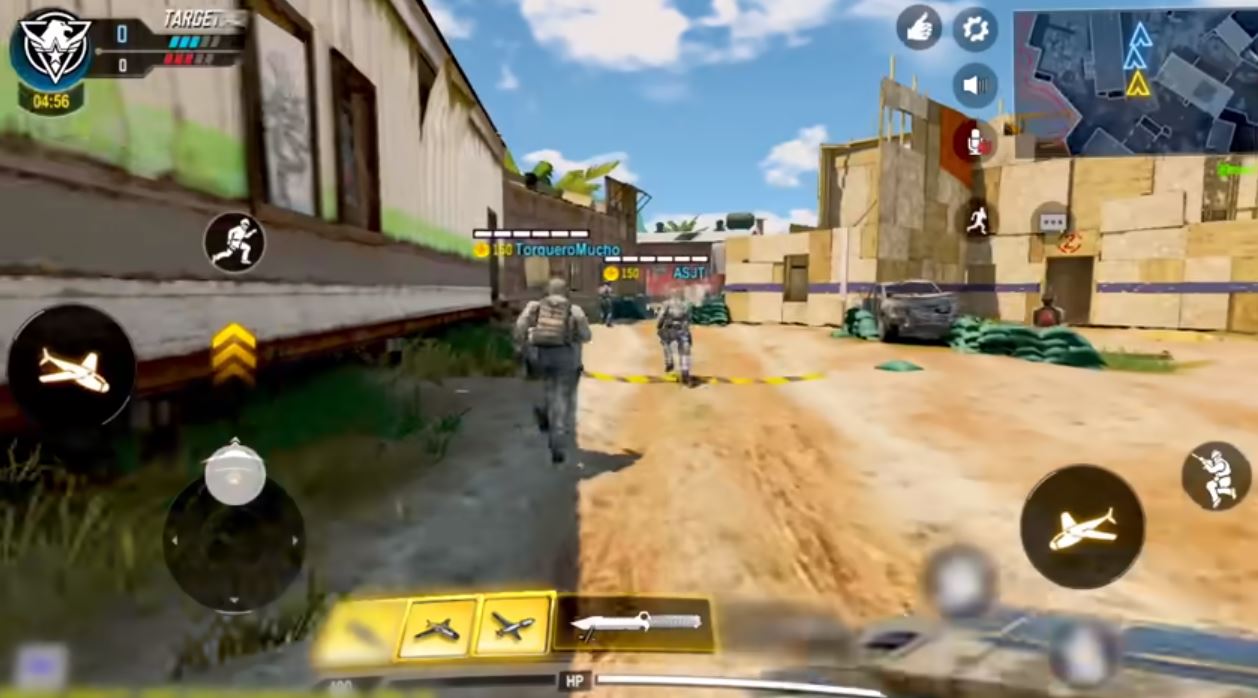 Call of Duty: Mobile Free for Android and iOS

PUBG is a game from the present. However, if you are looking for a battle royale game from the future, the best among the PUBG Mobile alternatives if Cyber Hunter. If you are looking for a PUBG Mobile Lite alternative, Cyber Hunter Lite offers similar gameplay and the objective of both the games is to survive till the end. Just like PUBG Mobile, there can be 4 players in a team, and you can explore the complete map with your team members in a vehicle, and kill on the go. The game depicts a futuristic world dominated by AI and supercomputers, where the fight between good and evil is on. There are several new elements within the game making it different from PUBG Mobile when it comes to new ways of killing and finding ways of survival.

The game features exciting elements like quantum droids, brain-computer interfaces, Electronic Cores, etc., and each of the devices has some unique abilities to help you survive, camouflage, kill, and eventually build your strategy to win the game. Cyber Hunter is a relatively smaller game, when compared to PUBG, making it playable on several devices, even if you have limited space on your device. The controls within the game are also similar to PUBG, and that way, you will feel at home playing the game. The game is really exciting, and you can invite friends to your team by simply scanning a QR code. If you are looking for simple yet unique gameplay, you should try Cyber Hunter and Cyber Hunter Lite. 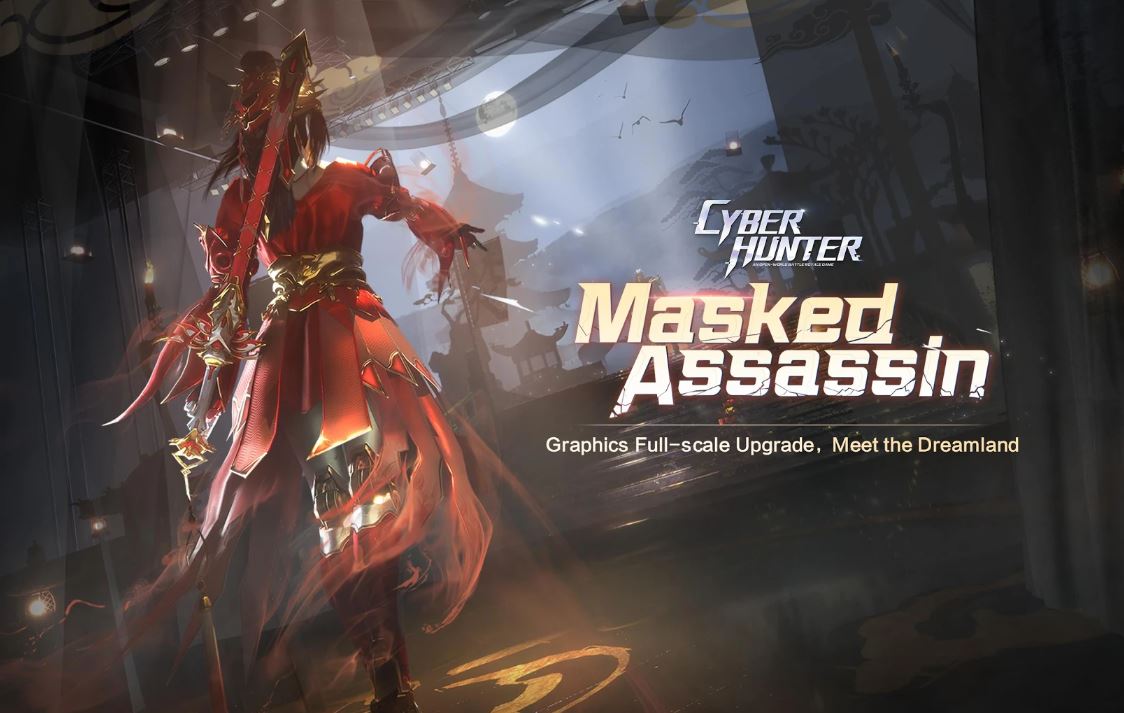 Another similar gaming app to PUBG Mobile. A creation by Epic Games, and one of the battle royale games that are ruling the planet with some unique futuristic abilities. Yes, I am talking about Fortnite. Though the game was first launched for PC, Fortnite can now be played on Android, if you have a fairly powerful device. Unlike PUBG and most other games, Fortnite runs on limited devices, but the fun lies in the build and kill strategy with some unique abilities. Unlike any other battle royale games, every building, trees, cars, bridges in the game are breakable, and you can proceed with breaking a building if you suspect somebody is hiding, and you can even build your own tower to defend yourself. Even though it is a battle royale game, you can also call it a tower defense game, where you can build your own protection to protect yourself and the team members in real-time.

With Fortnite, you can fly helicopters and can kill enemies on the ground with the assistance of additional team members on board. Powered by Unreal Engine 4, there are 2 different game modes with Fortnite Mobile, Creative and Build & Destroy. The Build & Destroy features the battle royale side of the game, and with Creative, you can play with your friends, and build anything you want. Just try the mode that suits your mood. Every week, you can get new events, and updates, to always keep you indulged in the game for experiencing ultimate fun. Previously the game was available exclusively from the Epic Games Store, but now, you can download it from the Play Store, and thus, you can avoid all the hassles involved in downloading a game or app outside the Play Store. 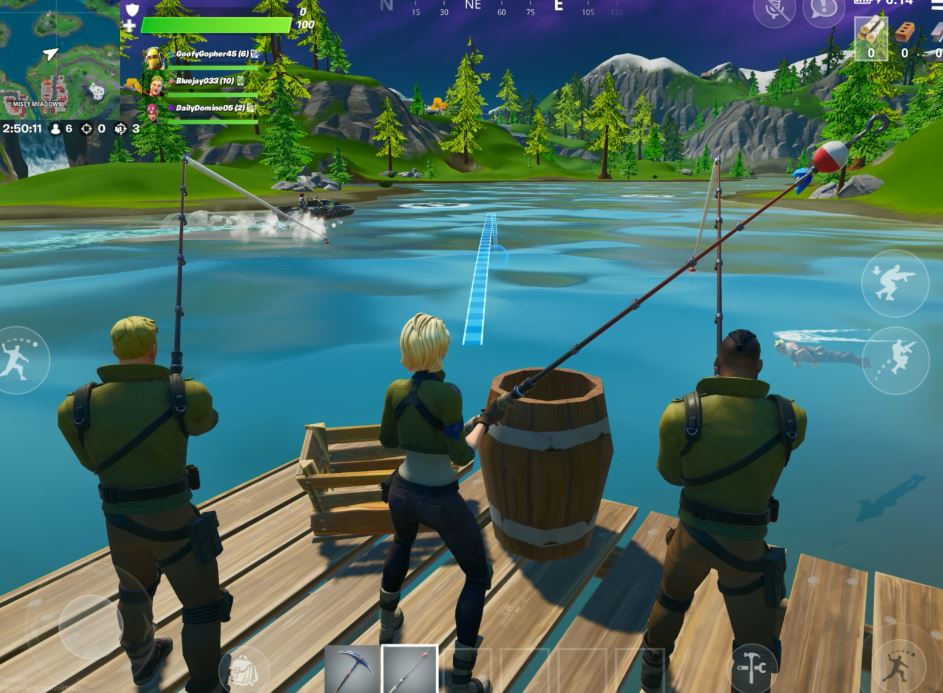 Another game that seems to be from the future is Creative Destruction. The objective is the game is again the same, and that is, survival till the end of the match. There are numerous game modes to enjoy and you can explore several beautiful maps to show your destructive side to your foes. You can play the game both in FPP, as well as TPP mode, just like PUBG, and the game features some amazing weapons that have some unique abilities not available in similar other games. Besides killing the enemies, you can also build your own defense in the game, which is yet another fun side of the game, just like Fortnite. That said, the idea is quite similar to that of Fortnite, but Creative Destruction can run on most devices, and the biggest advantage is, the game is available within a small package of just more than 2 GB for any user to download and play the game.

Unlike Fortnite, building defense in the game is relatively easy and is a matter of just one tap. Destroy existing buildings and trees to collect materials for building your own defense against your foes. Creative Destruction is a fast-paced battle-royale game, and the game also has a PC version with a lot more game modes that you will find interesting for sure. The controls in the game are quite amazing, and you can shoot and build with easy-to-use touch controls. Just like most other battle royale games, the strategy is the key element to win the battles, and as you proceed in the game, you will start facing tougher opponents that take the fun of playing the game to a whole new level. 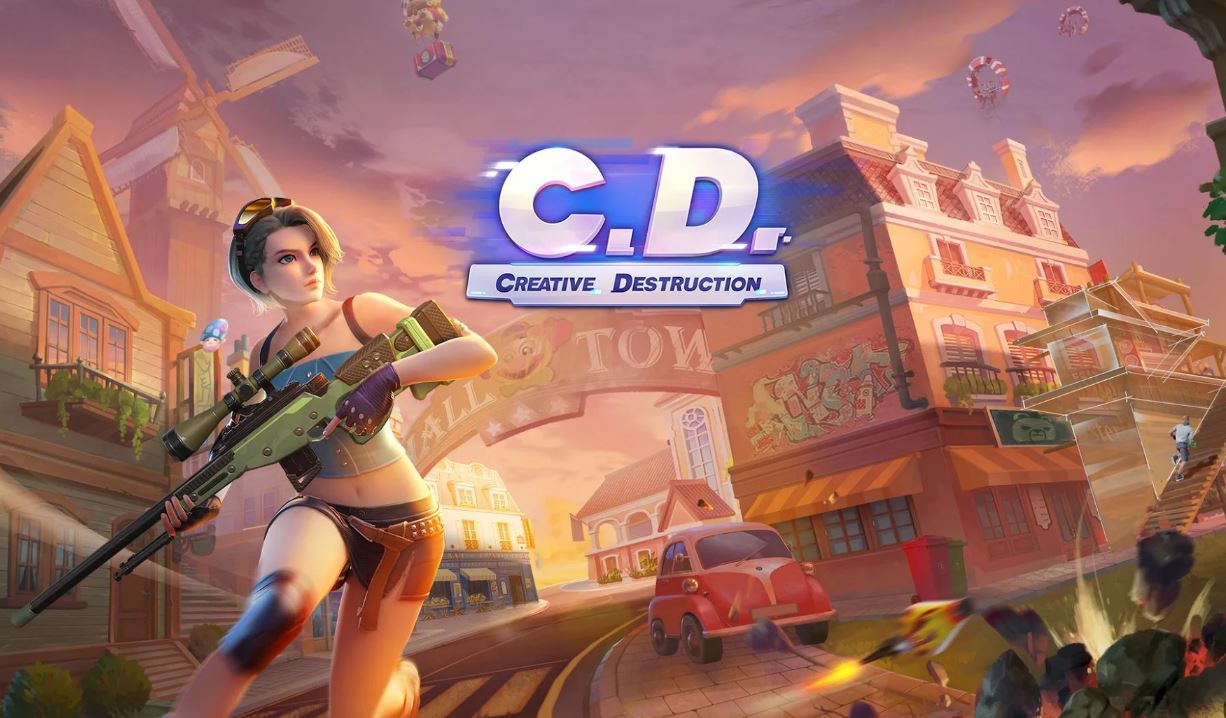 Battle Royale games are really fun to play, and it has already set a new era in the world of action gaming. All the games I have mentioned here might not be exactly like PUBG, but all are battle royale games, and most of them inherit several features of PUBG Mobile with something new. I just wish PUBG Mobile doesn’t get banned, but time will give us the ultimate answer.

So, that was my list of top 5 alternatives to PUBG that you should try out. Do you have any questions? Feel free to comment on the same below.