Do you want to run Virtual machine inside a Virtual Box VM then you have to enable the nested virtualization? But how? Here in this tutorial, we let you know the command to enable nested VTX/Amd-V option in VirtualBox if that appears grey and you are unable to check its box.

However, in VirtualBox, we have nested virtualization option but in grey out, I mean we can’t check its box to enable the same, at least in my case I couldn’t. And if you are seeing the same problem in your Virtual Box and want to enable nested VTX/Amd-V for any guest operating system then use the command given in this article.

On Windows 10/7 or some previous version run the command prompt with administrative rights whereas for macOS or Linux distros (Ubuntu, CentOS, Linux Mint, Debian etc.) use the command terminal.

Now the second step is to run a command to make the nested virtualization accessible.

Note: Replace the VM-name with the VM or Guest operating system name for which you want to enable the nested VTX/AMD-V.

For example, we have Proxmox named VM on Vbox, thus the command will be like this:

Now, open the VirtualBox software installed on your host operating system and select the VM for which you have enabled it. For example, we want to this nested virtualization for Proxmox bare-metal platform and activated for the same, thus we select it. You can select the guest VM used in the above command.

After selecting the VM, click on the Settings option given in the VBox menu.

Now, from the left side panel select the System settings->Processor Tab and then check the box of the option called “Enable Nested VT-x/AMD-V” and hit the OK button. 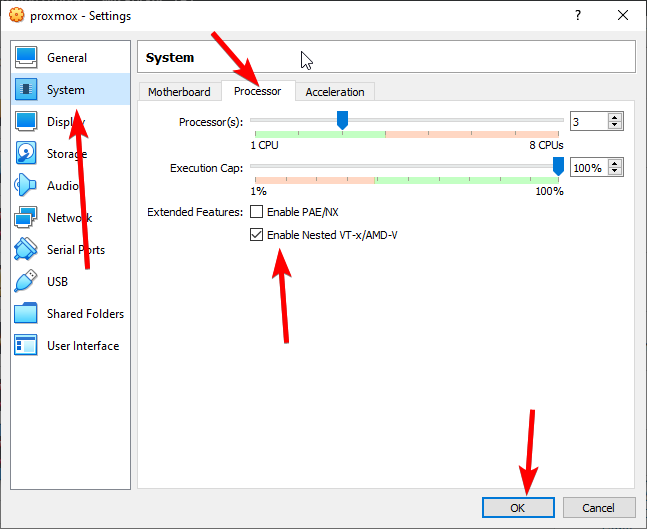 That’s it, now you can install and start virtual machines inside your VirtualBox.