Minecraft’s most talked about and ambitious project, Minecraft Earth soon will be a good memory for players. Yes, you heard it right. Minecraft Earth, the virtual reality mobile game will shut down at the end of June 2021 due to the ongoing pandemic.

Microsoft designed the Minecraft Earth game theme around two important aspects – team play and free movement – just like what we saw in Pokémon Go. But, both of these things are near impossible for the players because of the Covid 19.

It is clearly seen that the decision was not an easy one for the company by looking at their official tweet. 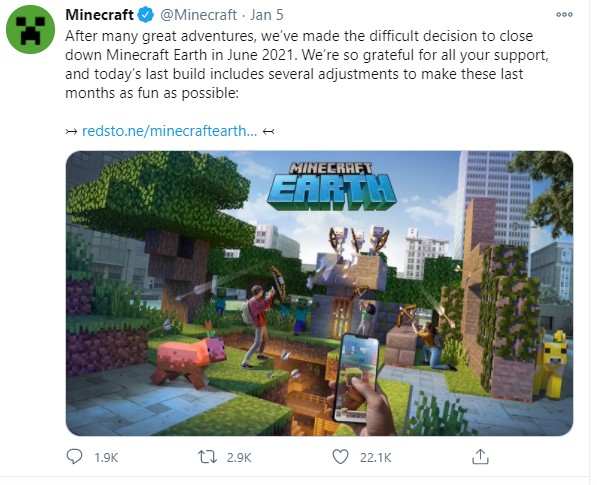 Starting from simple features like player vs player, kohi click test, etc. to adding support for virtual reality and augmented reality. Over the last few years, Minecraft broke all the records and became one of the most selling games of history. Minecraft fans were expecting something like this will also happen with Minecraft Earth, but the game really didn’t outperform its rival popular game ARG Pokemon GO.

Ahead of the shutting down announcement, Minecraft wants to give a proper send-off by unveiling a few of the last updates to the game which really would help the fans to ease out the pain.

Have a look at the coming updates:

So, in the end, it was quite a bummer from Microsoft and a reminder to all the game lovers that we are still in between an ongoing pandemic. Let’s hope no more games get hit by this. Keeping our fingers crossed.