Halo is one of the most popular video games out there and there is no doubt about that. Halo series and its timeline are quite old as the first installment came out back in 2001. So, the Halo franchise is almost as old as the Counter-Strike franchises are. Now if old franchises are still doing business in the market since 2001 with new installments, this is more than enough of proof of how popular the franchises are. Initially, Halo used to be a Windows game, but later on, the franchises shifted towards Xbox Console, and for a couple of years Halo had been a Console exclusive as well, due to piracy issues. But after a couple of years again with new releases and remastered editions of older installments bundled with the “Halo Master Chief Collection,” all the installments got launched on Windows.

The Halo franchises and its early main installments were originally developed by Bungie. Back in 2011, the 343 Industries took over the project from Bungie and keep going with new developments. Since the beginning, the Halo series was it was a story featuring the experiences of the protagonist “Master Chief John-117”, one of a group of supersoldiers, code-named as Spartans, and his artificial intelligence (AI) companion, Cortana. Yes, the MS Windows Assistant Cortana is named after the fictional AI from Halo. One thing you should know Halo games have been launched and featured on Xbox 360, Xbox One, MS Windows, OSX, and iOS, but never on PlayStation or Nintendo. That is why Halo is considered as a Microsoft Xbox exclusive product. 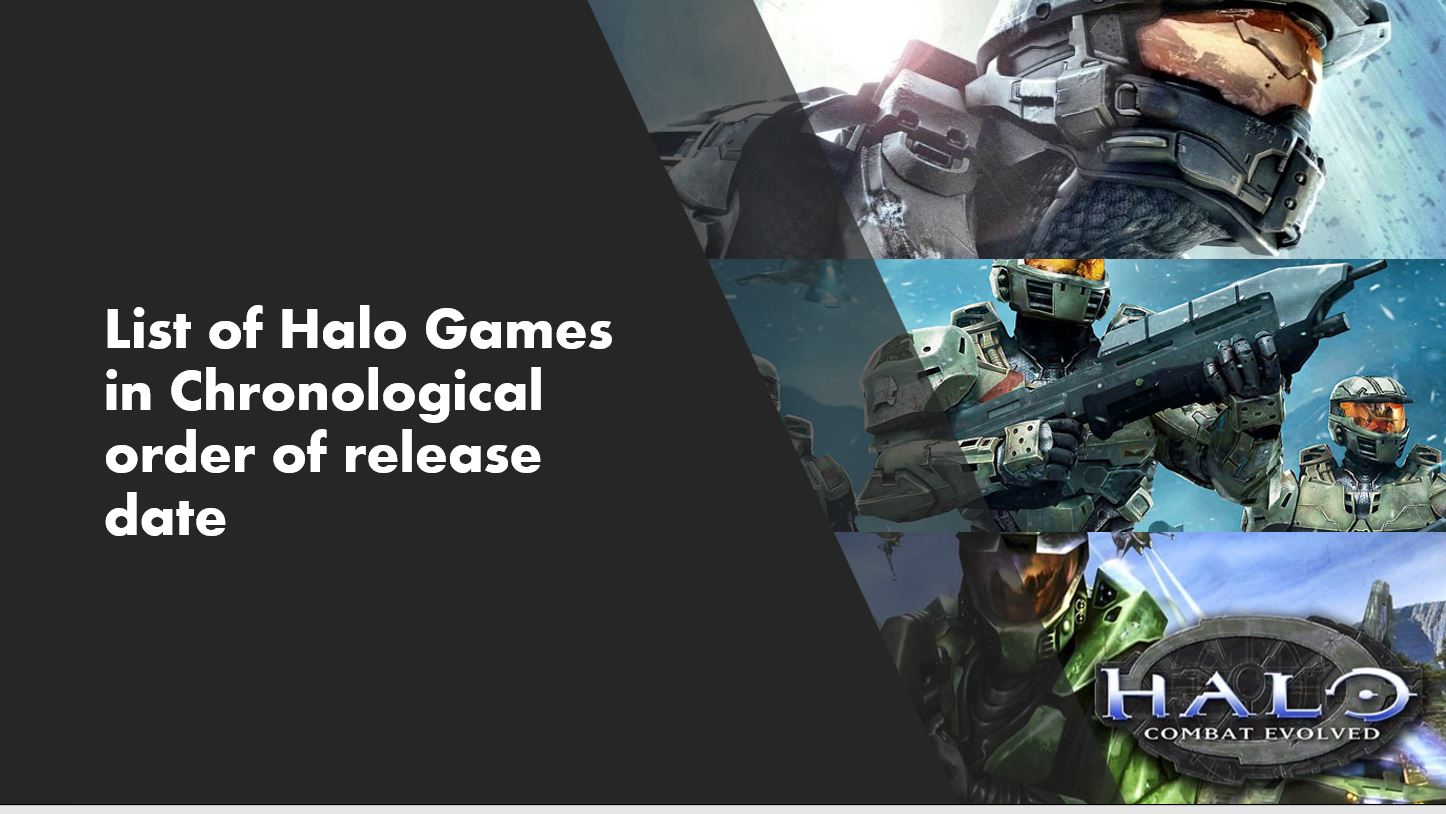 Since 2001 to till date Halo franchises developed and launched a total of 14 games, but not in story-wise chronological order. That is why it is really hard for new players to understand how they should play the series to understand the story clearly and enjoy the games at the fullest. As Halo is a legendary franchise in the world of video games, even Halo is one of the biggest pioneers of modern-day e-sports also, that is why there is a huge fan following of Halo out there. Even many teenagers and new upcoming gamers want to play the Halo series for its awesome gameplay experience and story.

According to many old Halo fans, Halo is not just a game it is a saga or a legendary tale itself. So, if you are an enthusiast gamer or e-sports aspirant or an Xbox owner, you must play the Halo series in order to complete your gameplay experience. While talking about Halo e-sports you should know legendary Twitch streamer Ninja was a former Halo e-sports player. Apart from him, there are many other big names and big teams with seriously funded by big sponsors are there in Halo esports. The Halo Championship Series a.k.a HCS event was organized for four consecutive years from 2015 to 2018, where the prize pool used to be USD 10,000.

Now if you are one of those who would like to play the Halo series from top to bottom, in this article, I am going to list all the Halo games titles chronologically according to story lineup and timeline. Also, you should know that the Halo series does not only feature the story of the Master Chief but some titles feature other stories as well. So, I would suggest you how to play the Halo games story-wise and in order of their launch. Let’s roll with the discussion.

Here is the list of how the Halo games were originally released, though you can find the same timeline order or list on Wikipedia as well, I am adding this list for easier understanding of the difference between Halo original release and series chronology.

List of Halo Game Titles in which they released to play for gamers.

And nowhere is how you should play Halo games chronologically;

How to Play Halo Titles in order?

Now you can see there are 14 titles in the Halo Halo timeline in total which have been released under the Halo franchise so far. But in order to play the main story, you do not need to play all those games, many of those games are not directly connected to the main story. In order to understand this concept, you have to know how many storylines are there in the Halo series.

There are four storylines in the Halo series till date, and only one of them is the main story. Though all of them are connected via many small aspects, references, and after story effects.

Which Halo Titles to play based on Storyline?

Now you should also know that Halo Wars is not an FPS like the main Halo series titles in its Timeline. Halo Wars is a Real-Time Strategy Game, and it is unlike the normal gameplay experience of most of the players. So, if you are not especially interested in playing Real-Time Strategy Games, then you do not need to play Halo Wars, as you won’t miss any bit of story by doing that.

Also on the other hand the Halo Spartan Assault and Halo Spartan Strike are not conventional 3D FPS games, they are Twin Stick shooter games, which feature the very little amount of story. So, you might not want to waste your time by playing Halo Spartan Series in 2020, especially if you are interested in mainline Halo gameplay and story.

Halo Fireteam Raven is an Arcade Game, which neither has any related storyline, nor you should be bothered about. Just forget this game, unless you want to play Halo on an Arcade Machine at a Game Parlor.

Unlike the Halo Spartan Series and Halo Wars Series, Halo – ODST is an important game considering the storyline. Halo ODST features a normal FPS gameplay, with a good storyline connected to the main storyline, though I did not like Halo ODST much. So, it is up to you, if you want to play Halo ODST, you can play it, it won’t be a waste of time. Play Halo ODST after you finished Halo 2, as the story takes part alongside Halo 2, it is kind of collateral of Halo 2 main story.

Now comes the main storyline which is featured within the Halo Reach, Halo 1 – Combat Evolved, Halo 2, Halo 3, Halo 4, and Halo 5 – Guardians. Halo Reach was launched in 2010 after Halo ODST, but it is the main prequel of the main Halo storyline. Though Halo Reach doesn’t feature Master Chief, playing you would understand the concept of the ongoing War at Halo Universe. In Halo Reach, Master Chief is not the protagonist, so you play as SPARTAN-B312 a.k.a Nobel Six, but you can find Master Chief in a later part of the game, but can not play as Master Chief.

So, it is recommended that you start with Halo Reach, then keep playing Halo 1, 2, 3, 4, 5 and then wait for the upcoming Halo Infinite, which is also featured within the main storyline with Master Chief.

Apart from all these, we know Halo – Combat Evolved Anniversary version was released in 2011, which featured a Remastered version of the same game. While the Halo Master Chief Collection released in 2014, it contained a remastered version of all the Halo titles related to Master Chief, except Halo 4 Windows Edition. Halo 4 Remastered Windows edition would be available shortly by the end of this year.

If you are interested in playing the multiplayer modes of Halo titles, then you may not find ample quantity players anymore now, apart from the Halo 5 – Guardians. The upcoming Halo – Infinite is rumored to be part of the Master Chief storyline, featuring Master Chief as the central character. The Halo Infinite Gameplay trailer was premiered last week only, so watch those on YouTube and wait for the game to be launched. Millions of Halo fans are waiting for the Halo – Infinite to be released, and Halo Infinite would be releasing on next-gen Xbox console Xbox Series X as well along with Xbox One and Windows. Also, it is rumored that Halo – Infinite would feature Ray tracing features in graphical visuals, so if you have an Nvidia RTX GPU then it is the right game for you to test your GPUs true performance. That’s it on this topic, bye, for now, folks, and do not forget to enjoy the awesome theme music of Halo while playing the game.