The term space brings a flood of thoughts in our minds. Space is in fact anything and everything. The European Space Agency has defined outer space as the area that begins about a hundred kilometers above the Earth’s surface and from a particular zone where the shell of air around our planet disappears completely. Therefore in the absence of air, sunlight cannot be scattered, and hence a blue sky is often observed. Space appears from the earth as a black blanket dotted with numerous stars. Now coming to the concept of space law, it can be described as the body of law, rules, and regulations governing space-related activities. A question may arise regarding what sort of activities may necessitate legal application and to what extent the laws are binding in nature. This article concentrates on how, why, and by whom the laws have been framed and what is India’s position in this sector. 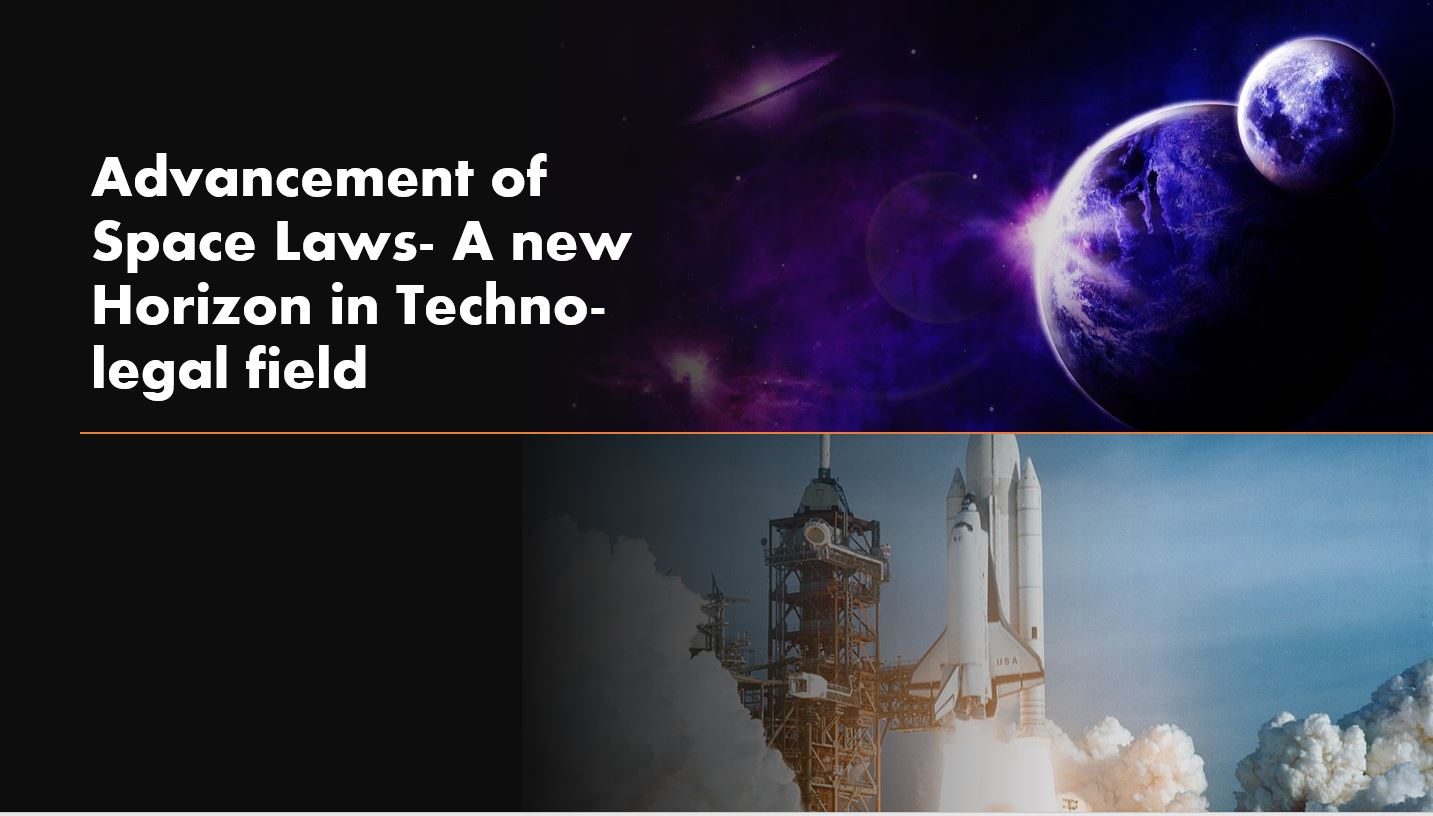 What Ignited the Need for Space Laws?

Space research and development have been in practice since time immemorial. Celestial research had already been initiated by the 15th century when Nicolas Copernicus started propounding and formulating various models of the Universe and location of the sun and earth in the universe. However, it was not before the 20th century that space research and development started including the ejection of bodies such as spacecraft and satellites from the earth to the outer space for understanding the various perspectives of outer space. The first satellite to reach the outer space was Sputnik-1 by the Soviet Union in 1957. In fact, even before this, Nazi Germany had launched long-distance rockets in the form of weapons during World War II. These Rockets were launched in order to attack London and they included 200-mile range V-2 missiles that had successfully crossed the English Channel at a speed of more than 3500 miles per hour. Soon the world realized that if steps were not taken immediately, then space research may be exploited to launch another war leading to permanent destruction.

Before the United Nations was established in 1945, a convention- the Chicago convention was held in 1944 to discuss whether any International Treaty was required to be enforced for the purpose of establishing International Space rules and regulations. But even before the United Nations established its branch concerning space laws and regulations, the United States of America had already introduced domestic legislation the National Aeronautics and Space Act or the NASA act in 1958 in order to propagate its research and development concerning the outer space.

The legislation with respect to outer space is broadly divided into International rules, regulations and treaties, and Domestic Legislations. Domestic Legislations with respect to space research and exploration are formulated by a country in order to regulate the celestial operations which are being conducted by satellites and spacecraft of that particular country. Since the research and development are under the governmental wing of any country, for the purpose of private companies to launch their satellites and spacecraft due permission is required to be taken from the concerned government. As a result of the formulation of several domestic legislation, private companies are successfully launching their own satellites. One such instance is Elon Musk’s SpaceX which has contributed greatly to the field of Space Research and Development.

International Space office and its 5 treaties:

The United Nations Committee on the Peaceful Uses of Outer Space (UNCOPUOS) was established in 1958 as an Ad Hoc committee. Consequently, in 1959 the United Nations Office for Outer Space Affairs (UNOOSA) was established as a Secretariat to the committee. These organizations work in collaboration with one another to introduce International treaties. Now coming to the operation of the treaties it is not binding per se. Only a member who has ratified or signed a Treaty will have to abide by the Treaty or else it shall be penalized. Similarly, all the members of the United Nations are ipso facto members of the committee. Therefore the members of the nation-states are given birth to by the process of ratification. There are five main treaties and numerous corollary treaties which have their origin in those five treaties. These treaties include:

The OST is the parent treaty and reserves the use of all the celestial bodies for peaceful purposes. It came into force from October 1967. This treaty ensures that all the Nation-States take necessary measures and do not exploit any celestial body during the time of expanding their research operations.

Coming into force in 1972, the liability convention is based upon the principles of strict liability which provides that if any country has been found to have committed any pollution in the outer space or any operation in the outer space that has indirectly affected any country on earth or has polluted any particular place then that particular country will be liable and will have to pay the damage. This treaty gives rise to another principle- The Polluter Pays Principle.

It provides that each and every country must register itself under the Committee in order to allow the committee to keep a track of all the spacecraft and satellites that are being sent to the outer space.

It was in force in 1984 and is an elaborated version of the Outer Space Treaty which provides that the moon and its environment must never be disrupted. No one can buy land on the moon without prior permission and even if permission is granted the same must be granted by an authorized body like ‘INTERNATIONAL LUNAR LANDS REGISTRY’.

Domestic legislation with respect to space research and development is extremely essential. In the absence of domestic legislation, only the Government of a particular country will have a monopoly over space research and development. Once this monopoly is abolished, private companies get an opportunity to participate in space research. Often the private companies have a greater amount of capital and can invest more and hence can conduct upgraded research and development in the field of space. Several countries have their own space legislations- the first being the NASA Act or National Aeronautics and Space Act of USA. It was signed in 1958 to upgrade civil and military space activities. The Commercial Space Launch Competitiveness Act, sometimes referred to as the Spurring Private Aerospace Competitiveness and Entrepreneurship (SPACE) Act of 2015, is another registration which has been framed to allow private companies of America to expand their research wing in the space sector. A few important space legislations include the Basic Space Bill of Japan, the law on the Activities of Launching Flight Operations (for the guidance of space objects) of Belgium, the legislation of the Russian Federation on Space Activity that has been formulated in accordance with the constitution of Russian Federation.

One of the most important aspects of space research and development is space tourism. Initially, the outer space was reserved only for astronauts. During the 21st century, it was realized that space research and development can be extended in such a manner so that common man can visit Space Stations as well. A few of the most important companies that are working towards the development of space tourism include Blue Origin, Virgin Galactic, and SpaceX. The most important forms of space tourism include orbital tourism, suborbital tourism, and lunar space tourism. However, space tourism has only been performed by the Russian Space Agency in 2010 and Dennis Tito was the first space tourist. NASA has decided to use SpaceX’s creation Dragon Spacecraft and Boeing”s Starliner Spacecraft for public astronauts. United States of America had passed the SPACE Act, 2015 in order to commercialize space. This has two meaning: firstly commercialization of space means utilizing space in a manner where resources which can be obtained from any other celestial bodies can be used in the industries situated on earth. In the post-2005 period, satellites have been programmed to search for ways for conducting space mining. Space mining can be beneficial in numerous ways including supplying minerals and raw materials for the production of future goods. Secondly, commercialization also means the utilization of space for the purpose of indirect capital production. Space tourists have to pay a lump sum amount of money to visit outer space; this money can be utilized later for the purpose of research and development or for the purpose of developing and upgrading spacecraft and satellite. Several countries including the USA and Russia are conducting various research in order to strengthen their space sector along with space tourism.

India still has a long way to go when it comes to space law. Although India is among the few countries that have successfully conducted more than 50 space operations, domestic space law is still lacking. The Space Activities Bill, 2017 has not yet been enacted. It is India’s first Space, Bill. K. Sivan- ISRO Chairman made a public statement on 5th July 2020 saying that the Bill is in its final stages and shall be placed before both the Houses of Parliament.

What is exactly documented in the most awaited Space legislation? Firstly, bypassing and enacting the Space Bill, the monopoly of the government over space research and development can be abolished and private companies can start developing and ejecting satellites and send astronauts to outer space. Secondly, if any state has been polluted by emissions from satellites, the state can demand compensation under the said legislation. India has not yet sent an astronaut to space. Post-Gaganayan Mission and Vyom Mitra’s launching into space, there will be an authorized certification as to whether astronauts can be sent to outer space from India. This legislation will further enable astronauts to demand any compensation from the Government or the private company that has sent them, in case they face any danger in the outer space.

Space research and development is definitely one of the most significant achievements of the human race. It is conducted mainly to expand academics to space research and to make the world know what lies beyond the horizon and in the skies. It is also important to detect the presence of aliens through SETI (Search for Extra-terrestrial Intelligence). The amazing aspects of black hole and asteroids have been possible to be understood only through extensive space research. But it seems exploitation has been evil in the human race which leads to war and unnecessary competition. For this reason, Space Law has been introduced so that all the countries get a fair chance to conduct space research and there is no exploitation of the celestial bodies.

Dr. Disrespect is Coming Back after Twitch Ban, Rumors