Computer Science engineers and other enthusiasts in the field of IT are very much interested in the field of application development whether for computers or mobile phones. This is an emerging trend because of the priority given to application development. Apps can be of different types like information giving, predicting something, health-related, finance-related, and, many more. Isn’t it interesting that single software is capable of handling the requisite query you are looking for?

This is an amazing programming language to work on if we are interested in the field of Data Science and Machine Learning. But, it also has the provision to build cross-platform applications with the help of its APIs like Tkinter, Kivy, PyQt, etc. These libraries are pip installable and help in building both GUIs for computers and mobile phones. Now talking about the most preferred libraries used to build apps in Python then Tkinter and Kivy top the chart. Both these libraries are getting very popular among the python developers out there and they use the same to build interesting GUIs. 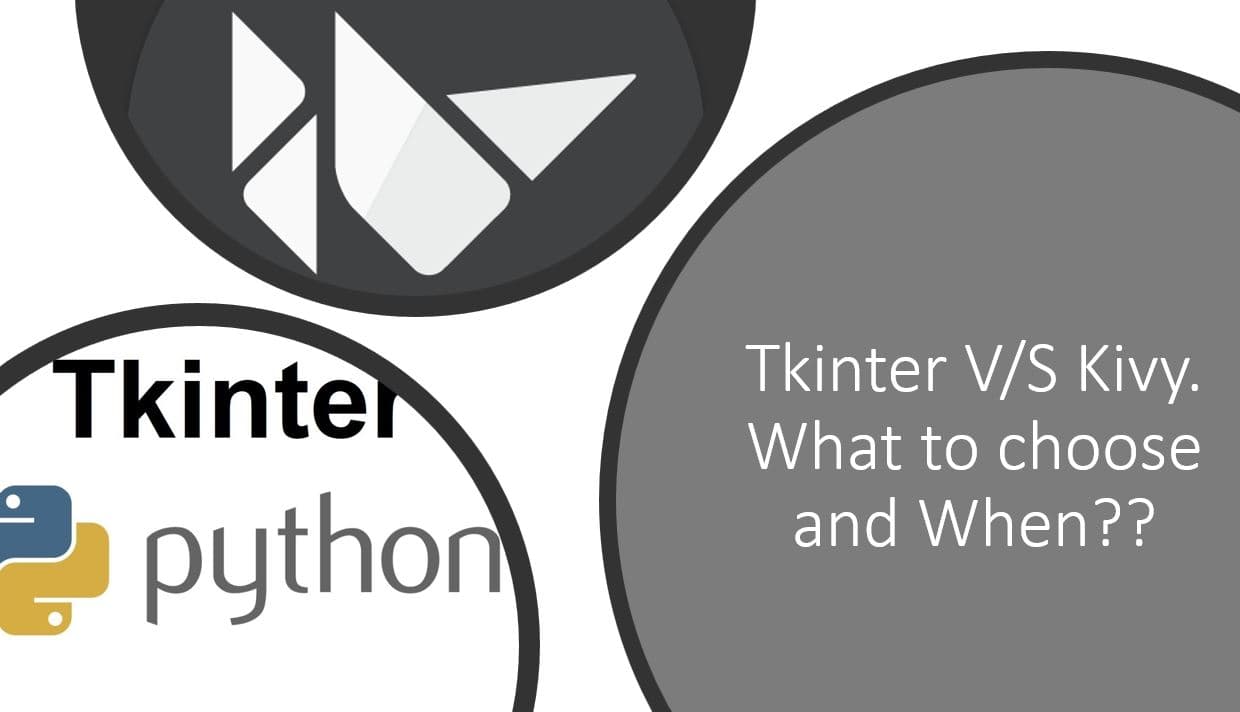 Contents show
Now the question arises which library to choose that is, Tkinter or Kivy. The answer to this is given below:
Conclusion

Now the question arises which library to choose that is, Tkinter or Kivy. The answer to this is given below:

Tkinter: This is an amazing library that has the power to build cross-platform applications for computers say, Mac, Windows, and Linux. It is already present in the Python environment and no need to import it through pip. Just do import Tkinter as tk and then you can access all the functionalities of it.

It helps in building very nice and interesting GUIs with only fewer lines of code condition being you know how to operate in python. Though it helps in overcoming the problems of building GUIs the main drawback is that it provides very less options to play around with our widgets and to build advanced applications we need to import various other dependencies to reap the benefits.

The library works the same for both Python 2 and 3 but the way the different classes of this library are imported is a bit different making it hard for developers working in different versions of Python to use the features associated with this library. It is not used for mobile application development as there are no features to build mobile apps through this library.

There is a library known as Kivy MD which is an upgrade to Kivy and it has got very eye-catching GUIs that we can use to build our applications. Moreover, it has all the dependencies required to build interesting applications by writing just a few lines of code. To start working on Kivy we need two files and an MD file and a Python file. MD is the extension for kivy format file and we can use this to write our front end code and the backend is written in Python file by incorporating the concept of Object-Oriented Programming.

This application is a very handy tool for all Python app developers and provides more functionality and dynamic ones than the Tkinter application. The installation can be done both with the help of pip and conda for Anaconda users. For installation purposes, you can visit the pypi.org website and can download the same. Also, there is an option that if we want some examples to be downloaded with this API or not. These examples are basically used cases that we can use to understand how to build a simple kivy app and start coding.

What is Kansai Airport and where is it Located?

2 thoughts on “Tkinter V/S Kivy. What to choose and When???”