How to Install Call of Duty Mobile on PC

In this article, we will cover the way to download and play Call of Duty Mobile Beta on any Windows 10/8/7 PC or MacOS using Android Emulator.

Long waited Call of Duty Mobile has been launched as a beta version on the 3rd Week of May 2019, I do not know the exact date of launch. The official release is soon going to be announced and this game is going to get a great reception by the players and fans around the world.

Right now, the game is only available to selected mobile device users on an invitation basis, mainly for those people who have pre-registered for the game. The developers launched the game a Beta-testing version, to finalize the launch product. Though the game is not released as an official edition on the market, already the question arises that like PUBG Mobile can this game also be played on PC devices or not? Plus, another question is the game is not released yet, so using an Android Emulator also you will not be able to find the game on Google Play store, so how is it possible to play the game on PC Devices without having the game on app-store now? In this article I will tell you the exact way, without using any special trick or without making you go through malicious websites and end-up downloading virus, how can you install the game on your pc, how to do the key mapping correctly. So, read this article carefully if you are about to follow the steps.


Why do we play Call of Duty Mobile?

Though only the question of how to play the game on pc devices is bothering you, there is also another question, why should you play this game? Or who should play call of duty mobile?

While I am writing this article, I have played the game for over a week already, here is my opinion which you should refer to understand your need for the game as well.

Most of the people were waiting for Call of Duty Mobile as it is a PUBG Mobile alternative. There are many players around the world who are already been bored with PUBG Mobile. There are many upcoming streamers who were waiting for a PUBG Mobile alternative where they can start their career with less competition. But the thing is while PUBG Mobile is the best Battle Royale Generation game on mobile, while Call of Duty Mobile simply lost the battle while it comes to the competition Battle Royale Games.

Though Call of Duty Mobile offers a battle Royale mode with a new map, many new weapons and a couple of new things here and there, there is nothing special which make it a superior Battle Royale game over PUBG Mobile. There are no major changes in the main elements of the game, the graphics are not a mind-boggling one, lots of bots (maybe because it is a Beta-testing version), and simply I did not like the gameplay, and I am sure most of the players are not going to like the gameplay of this Call of Duty Mobile Battle Royale Game.

But that does not mean Call of Duty mobile is not a good game. Actually, it is a great game when it comes to Multiplayer gaming. This game features three modes, i.e. Zombie Mode, Multiplayer Mode and Battle Royale mode. In the multiplayer mode, you can play both Ranked and Unranked match. The points and all unlockable are accessible in all the modes of the game. I liked the Multiplayer matches where it is just an 8 mins match, and the team collect the most kills wins.

The graphics are much better in multiplayer mode, maybe because of its small maps, while in the open world Battle Royale mode the graphics are not that much impressive (I like the PUBG Mobile graphics more). But, in simple words, there are no better games in the market for mobile devices which are better than Call of Duty mobile as a multiplayer game.

If you are adamant to find a PUBG Alternative with different kind of elemental changes, really a good Battle Royale gaming experience then try Fortnite Mobile.

Is it right to play Mobile games on PC?

Now, common, there is no hard and fast rule for that, so just do not bother about those murmurs. Unless you are representing any Pro team or Brands’ tag there is no problem with playing Mobile games on Pc. Most of the people do gaming for fun, and if you are enjoying playing a Mobile game on PC then there is nothing logical to say against this. Remember, if you stopped yourself from playing mobile games on pc, that not going to change anything like the technology of Android Emulator is available out there, millions of other players are going to do the same trick.

What kind of PC is Needed?

Not a gaming PC is needed for this game, around 4GB/6GB RAM, with a quad-core CPU and with a basic Dedicated GPU (like AMD R7 250 or Nvidia GT 1030) this game can run with its full potential. As per the graphics performance stability, I would say the game is pretty well optimized even for a beta version. The performance may feel laggy sometimes but with updates and the official releases, these lag related problems would be solved for sure.


How to install Call of Duty Mobile on PC

Download the NOX player, and install it, which is an Android Emulator for Win PC. I suggesting Nox player as I have found this game to performing at its best with Nox player. You can also try LD Player or BlueStacks.

Now you have to download the .apk (installation file) and the .obb (data file) of the game. Here comes the main problem as in most YouTube videos or in most other instruction articles you will find a link which either does not work or contains virus infected files. In some cases, you may end up with a survey completion also which is annoying and, in most cases, fake.

Either search for Call of duty Mobile Apk .obb on Google and select the result from a site called https://rexdl.com, or simply click on this LINK. Download the .apk and .obb file from the list. The page may look like this 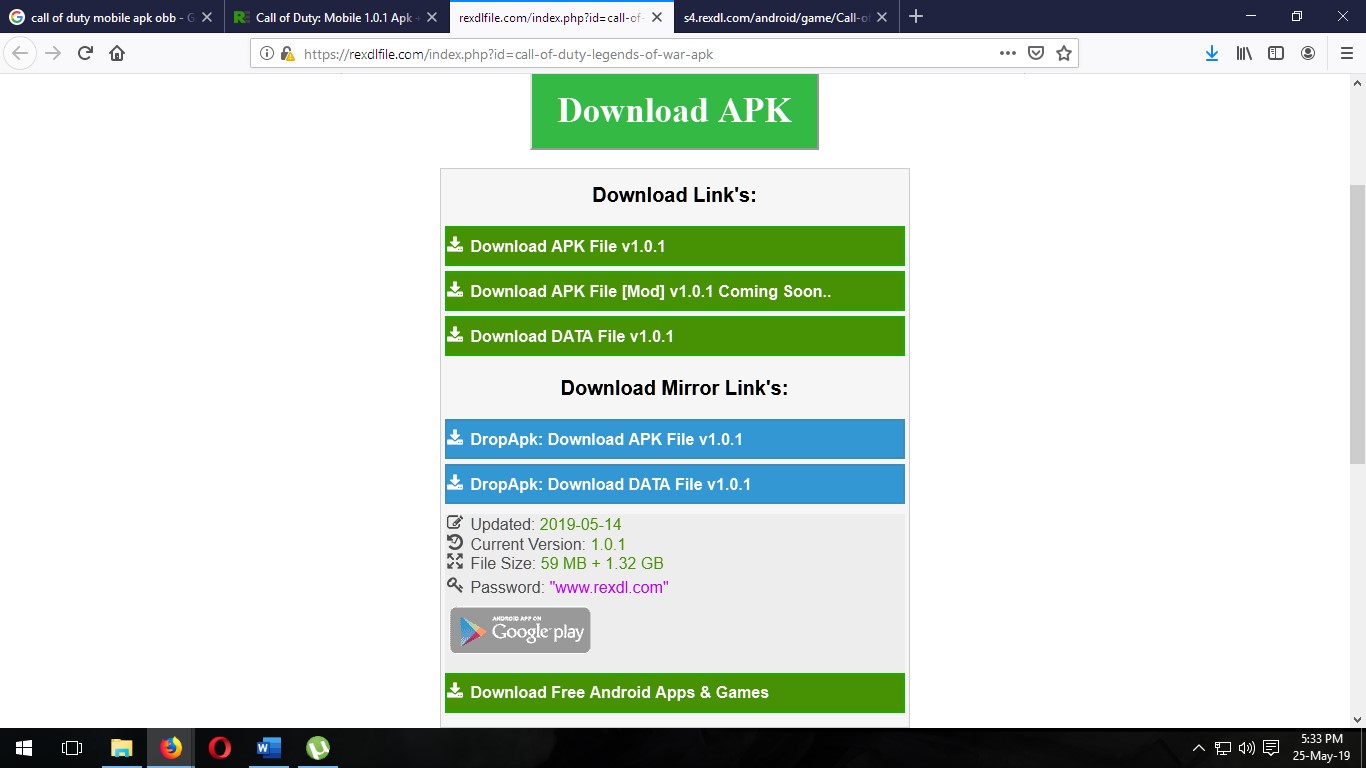 The Beta-testing version of the game is available to India only, so if you are not from India, then you might need to install a VPN service also. In order to do that, open the Play Store from NoxPlayer and download any VPN which grants server to India like India VPN, and install it. Then Run the VPN prior to run the game in order to play it. Here is the link to Google Play store for Call of Duty Mobile.

Now after you logged into the game by entering a nickname and a social id of yours, in order to play the game flawlessly with the keyboard-Mouse control you need to do the control mapping. In order to do that, Open the game > Go to the Settings > Click on Control > Click on Advanced Mode > click on HUD CUSTOM- MANUAL FIRE MODE and then click on the Keyboard mapping option on NoxPlayer window (Vertically third from the Top right), now make the control exactly look like the image given below the Save the changes, and you are ready to go. 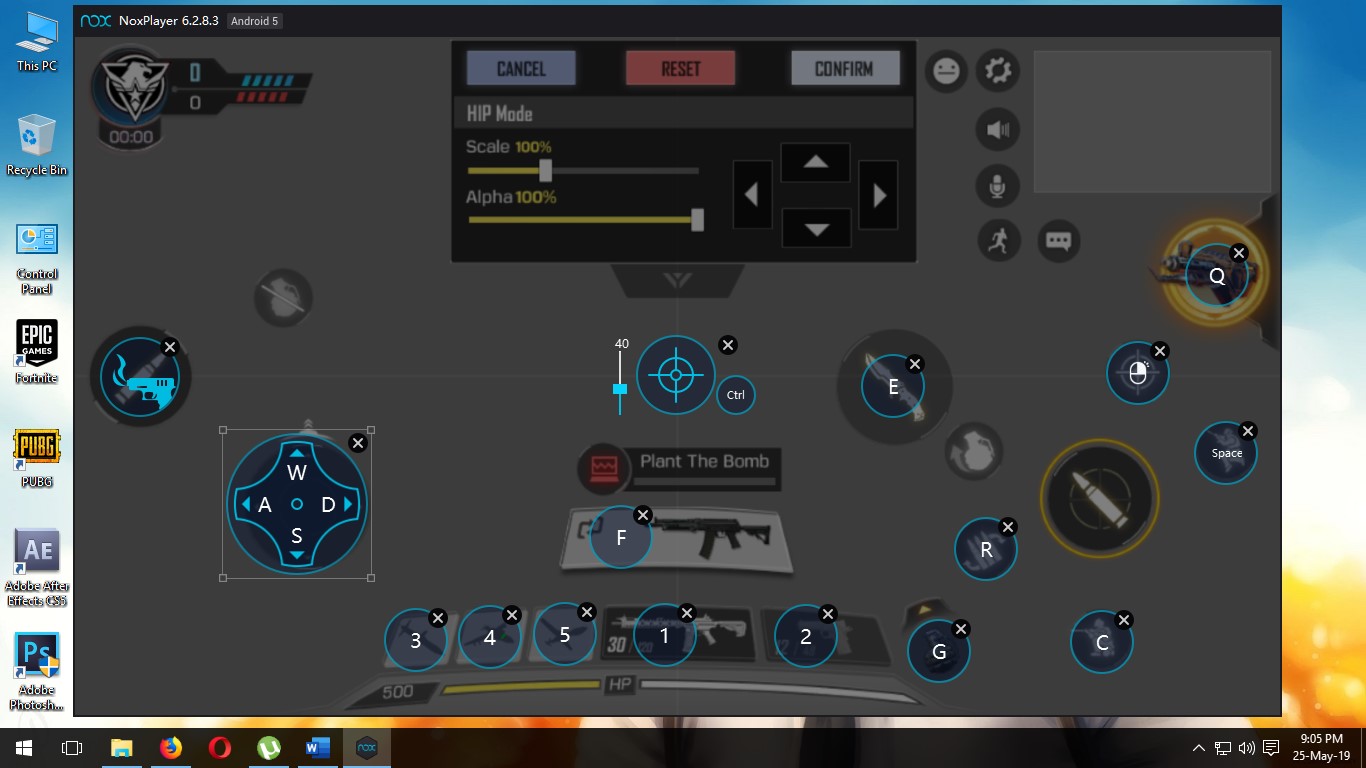 Remember if you want to play the Battle Royale Mode then the control schemes are little different, so there you may need to Re-map the keyboard settings again using the same technique as above. Do the keyboard remapping thing patiently so that you do not jeopardize it.

The graphics are set to very low, in order to change it, you should change the Graphics option to High or Very High with the in-game menu and also you need to change the resolution from the NoxPlayer menu just like you changed the hardware settings.

Right now, I am playing this game without any issues and enjoying it, hope you will enjoy the same.

The PlayStation 5 launch is just around the corner....
Read more
Games

There is news coming up from the insider sources...
Read more
Games

Future of the Gaming Industry in India 2020

With the population of 1.3billions, India...
Read more