After dual sim phones, people are eagerly looking for a way to run multi-account apps on Android like dual WhatsApp, Facebook, Instagram and more. Not only Dual Sim Android phone users but people also keep searching for a way to access multi-account app for iPhone. However, on the computer and browser people can access multiple accounts of different social service at the same time but in the phones, it still bit difficult to manage multiple accounts. That’s why, if you want to use multiple account app then either you have to download some third party app like Parallel space app or your smartphone manufacturer should have given this facility inbuilt in the mobile OS like OnePlus has, which known as Parallel Apps.

A couple of months back the Instagram has updated a feature in their app that allows multiple users on one Instagram account. Means under the Instagram profile settings there is an option called “Add account“ that helps the users to add multiple accounts to a single Instagram app. After that, the user can switch multiple accounts of Instagram without cloning or by using any third-party app like Paralled space. But this is not possible with other apps like Whatsapp and Facebook, and you have to use clone apps; If you want to separate your business and personal life or to get the benefits of Dual SIM smartphone.

Previously people do the cloning of apps by modifying its signature but that was pretty geeky and hard and not worked when you got the security update for the Android OS. However, now everything is pretty much straightforward with help of Parallel Space app which allows you to run two instances of the same app without rooting Android or Jailbreaking the iPhone /iOS.

Before diving into the tutorial part let me introduce the Parallel space and its features. It is the app that is available for Android and iPhone that can run two instances of any installed app by cloning them. Basically, it creates an isolated environment where it clones and installed the apps already present on your phones such as WhatsApp, Facebook, Telegram, Viver, Hike, Sanopchat, Instagram, Clash of Clans (COC) or any other app or game installed on your smartphone without root access. It is available two versions one is parallel space and other is parallel space lite. Now you might be thinking what is the difference between them.

Both the Parallel space lite and Parallel Space are developed by the same company but marketed one as the full version and other as the lite version that’s may true hypothetically but in real world usage and functionality, both are exactly same. I have installed and used both the apps but there is no difference in terms of the performance and battery usage. Even the size after installing of the Parallel space and parallel space lite is almost same, have a look at the screenshot given below. 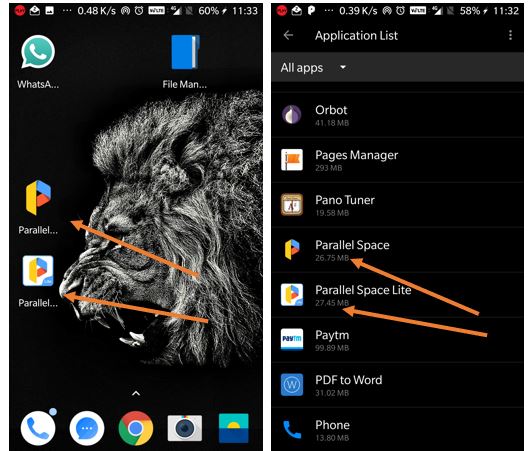 The developing company of this app said that the Lite version of the Parallel space is the optimized version of the main Parallel app but we didn’t find that in our test. Both are same from the interface, settings, size and in usage. The only benefit I can see is you can install 3 Whatsapp instead of 2 WhatsApp in 1 iPhone or Android or any other app instances. Example: one in the phone, one in the Parallel space and one in Paralled space lite.

How to use Parallel space

To install and use the Parallel space multi accounts perform the following steps:

For more information please see the below screenshots:

We are using the Android smartphone for showing how to use the Parallel space app but all steps are same for iPhone and other Mobile phone OS.

Step 2: Open the Parallel space app and it will ask you to select those apps you want to clone in the Parallel space for accessing multiple accounts. Also, note that you only able to create dual instances to get the benefits of dual apps under the clone apps section if a particular app is already installed in your phone’s main memory.

Step 3: After selecting the apps just tap on the blue color button with a text “Add To Parallel Space”. 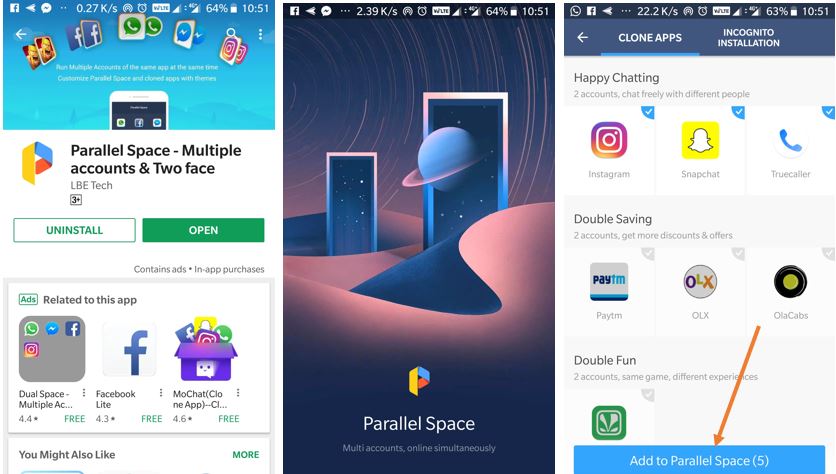 Step 4: Now every time you open the parallel space app you will see a clone of your main app which works totally independently to access the multiple user accounts. 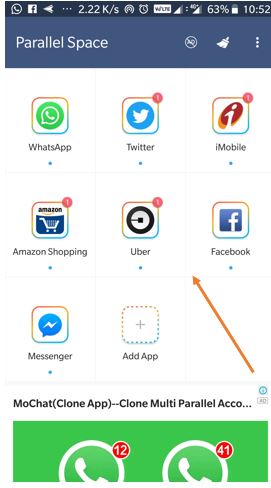 How to Use the Parallel Space Incognito Installation

If you want to hide some app, means install some app inside the Parallel space without installing it on your device then use the Incognito Installation option.

Step 2: Now tap on the tab Incognito Installation given on the top of the bar in Parallel Space app.

Step 3: If you are first time user then you get some tips to know how to use this feature. Just tap on the TRY NOW button. 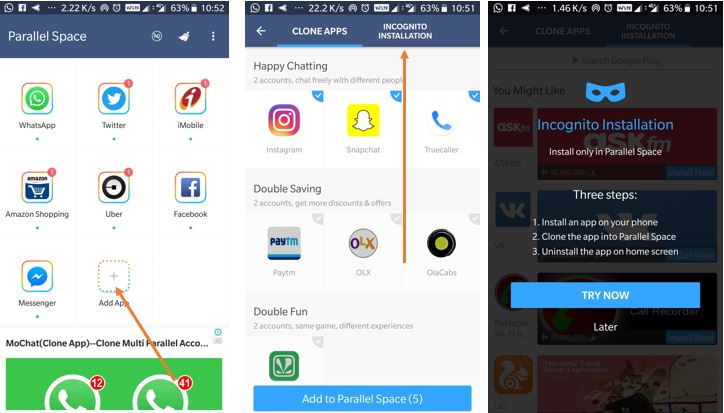 Step 4: You will get some apps recommendation of popular ones such UC browser, Clash of Cans and more. But if you want to install some particular app in the parallel space incognito installation window than just search on the bar given at the top with a watermark “Search Google Play“. You can see in the below screenshot. And for installation of any app just tap on the Install Now button given on the image on every app. 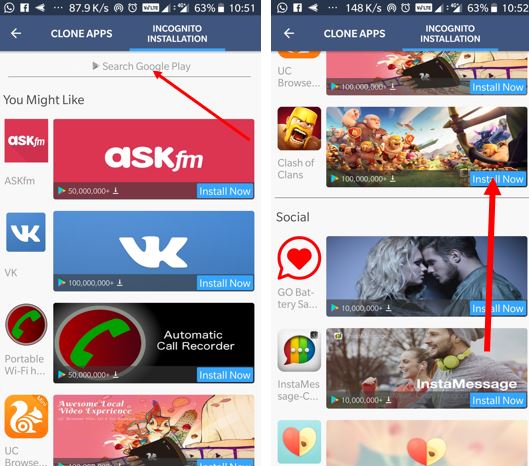 How to Create apps shortcuts in Parallel Space

You can create a shortcut of apps installed in the parallel space so that to you don’t need to open it again and again to access any particular clone app.

Step 1: For an example, if you want to create a shortcut of the clone Parallel Space WhatsApp. Just tap and hold it.

Step 2: As soon as you hold it, you will get two options on your screen one is Create a shortcut and other is Delete.

Step 4: The Parallel space ask for your confirmation to create the shortcut of the Whatsapp on your phone’s main screen. Just allow it and you will see a shortcut on the screen with a small Parallel “P” logo on the right side bottom. For more reference, see the below screenshots. 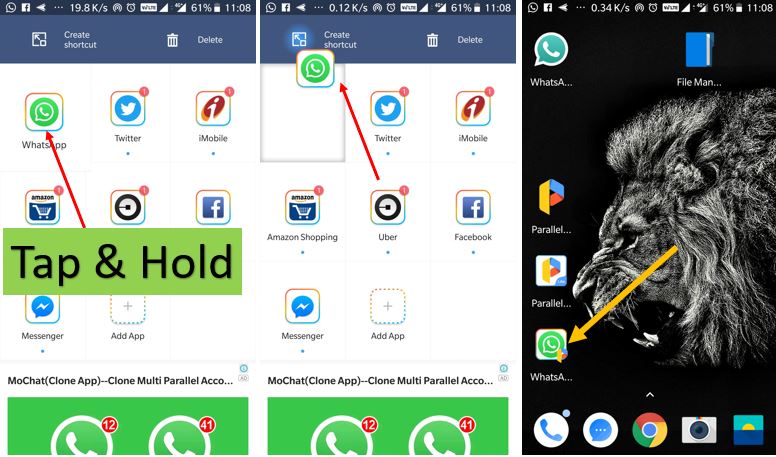 In this way, you can use 2 WhatsApp in dual sim phone on a single device without OgWhatsapp by using Parallel Space.

You Might Also Want to Know: How to install and use OgWhatsApp or GBWhastApp to hid the blue ticks, Last seen and much more.

How to use two whatsapp in one android phone without ogwhatsapp