We don’t need to pay a hefty price to get a 4K Smart Tv in 2022 because Kodak has shown it by making affordable 4K Android smart TVs without burning a hole in our pockets.

Well, this is not the first time we are reviewing any Kodak smart TV, even a 4K one, but in Kodak CA Pro 43 finally we can say Kodak as a Smart TV manufacturer has ameliorated since its inception in the market. Earlier there were some issues with their products but with time, the company has improved a lot. With 43CAPRO5022 smart TV, Kodak has not only improved its TV build quality but also the sound. Well, at the price of ₹27,999 you would hardly find a good quality, a brand name, and Android smartness. As we already know with the increased price of electronic goods, in any other known brand such as Samsung, Sony, LG, and others, at this price we can only have a Full HD TV.

Well, you should not start envisaging some premium high-quality finish at this budget price instead of a balanced one that looks good without increasing the price of the TV. And the same is in Kodak CA PRO 43, it has a plastic body that doesn’t seem pleasant but sturdy with a thin bezel all around except the bottom as it holds the Kodak logo. The frameless design definitely can make this piece of technology looks good in your drawing-room. However, if Kodak had shrunk the bottom bezel a little bit more then that would be a true minimalistic approach. But at this budget, we can’t complain about it at all. 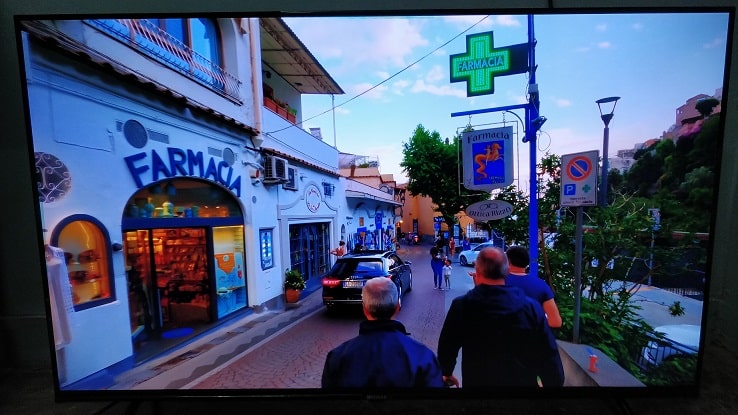 Inside the box of the Kodak CA Pro 43, the user will get all the necessary items such as 1 TV unit, Remote, Wall Mount Kit, table stands, User Manual, and two pieces of AAA battery. One thing which is extra this time is the AV cable convertor. Yes, for a minimal design approach, the manufacture has removed the traditional AV ports instead they have given an AV (female) to 3.5′ convertor (male) wire for both video and audio inputs to connect external devices such as Set-Top box.

Another thing that is better than before is the solid metal (iron) deep black tabletop stands. Matches the overall color and design of the TV.

Being a fairly slim design and not much protruding at the backside, when we hang it on the wall it becomes really difficult to access the backside ports. Therefore, to attach or detach some cables or USB drives, the user will face some difficulties, it is recommended to plug in all necessary cables before mounting the TV on the wall.

Connectivity will not be an issue, all the common required ports are there- the vertical side got three HDMI ports – one of which supports ARC and two 2.0 USB ports. Apart from them, one S/PDIF Optical, RJ45, and 3.5 mm ports are given there.  Built-in Chromecast and Wifi connectivity are available as well. If this is not enough then Bluetooth 5.0, Android Chromecast, or the iOS Airplay app to mirror content are also there. We will later talk about the performance of wireless connectivity, especially the mirroring. 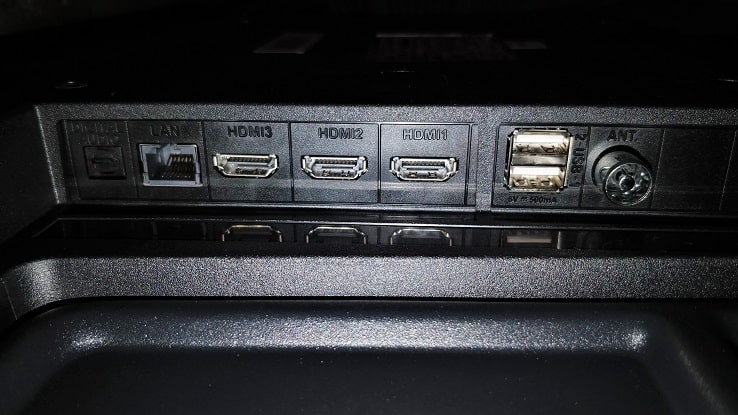 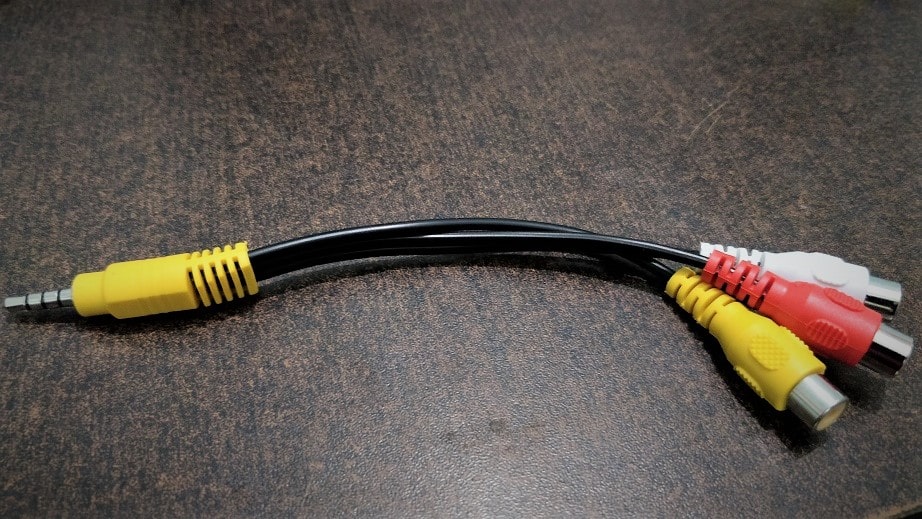 Design-wise remote has not changed much since the last TV Kodak 42FHDX7XPRO we had reviewed. However, the position and color of buttons have been. The Bluetooth remote has done a good job, as we don’t need to direct the Remote particularly towards the IR module direction anymore to control the TV which was a huge problem in older models of Kodak. The smaller design of the remote makes it comfortable even for people with small hands. The remote comes with dedicated hotkeys for Netflix, YouTube, Google Play Store, Amazon Prime Video Apps including for Google assistant. I appreciate that Kodak didn’t forget to give a mute button and shortcuts for changing input source and sound/picture modes. Overall the remote has quite a modern look thanks to its reduced size.

Note: Since there are no physical buttons on the TV, the only way to operate it is the remote. 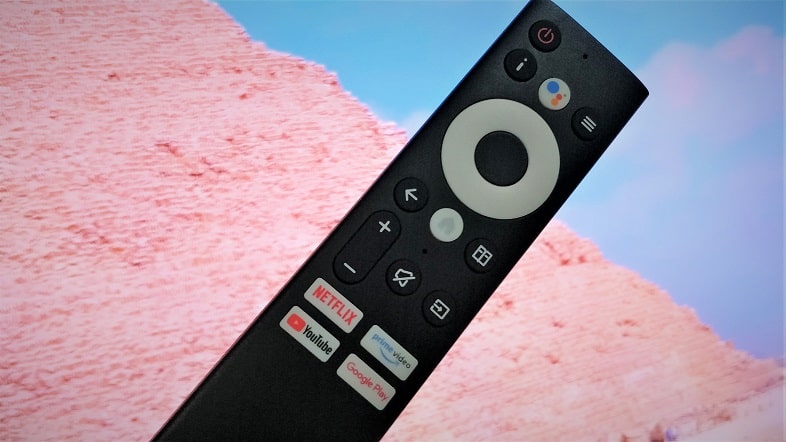 The Picture quality of our 43-inch Kodak CA PRO 43 review unit was quite impressive at 4K (3,840 X 2,160) resolution of course as compared to the FULL HD smart TVs from other brands available at this price. With a high brightness level of 450 nits (enough to watch TV in bright light rooms) and vibrant color production, the images appeared on the display more lively. The support of 60 Hz ensures that users can easily play and enjoy games over it. However, to make things better the company has introduced MEMC Technology (Motion Estimation, Motion Compensation) that adds extra frames to reduce the lags that appears in the fast pace gaming and action scenes. Although it is fine and works well, the gamers may face often motion blue in a few games. Also, there is no ALLM support which may disappoint high-end gamers.

To get the best quality outcome we have to use either 4K  / 1080p content because at 720p the quality will not be the sharpest one. 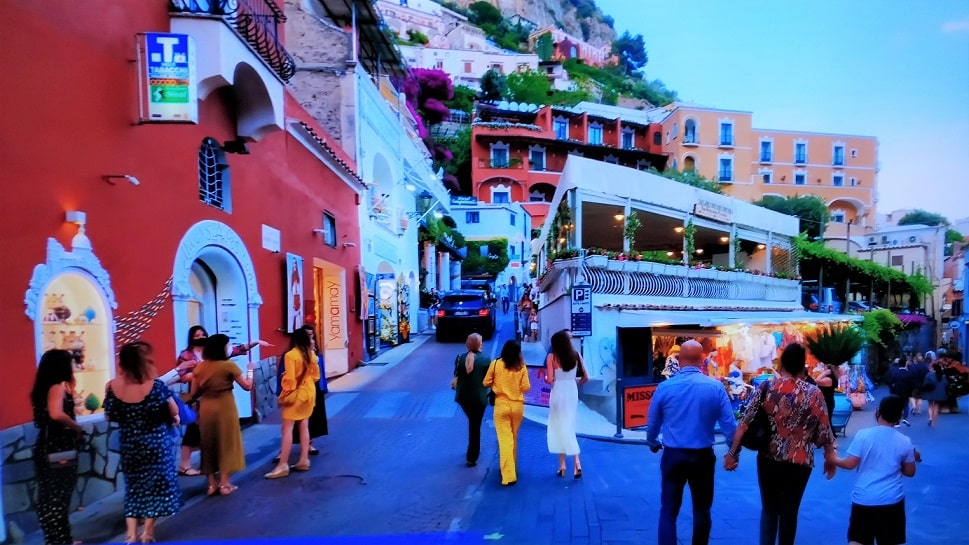 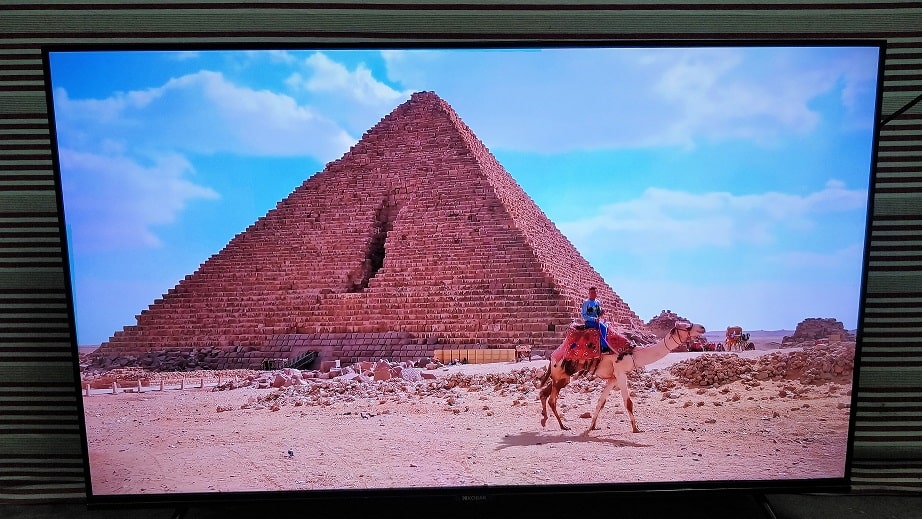 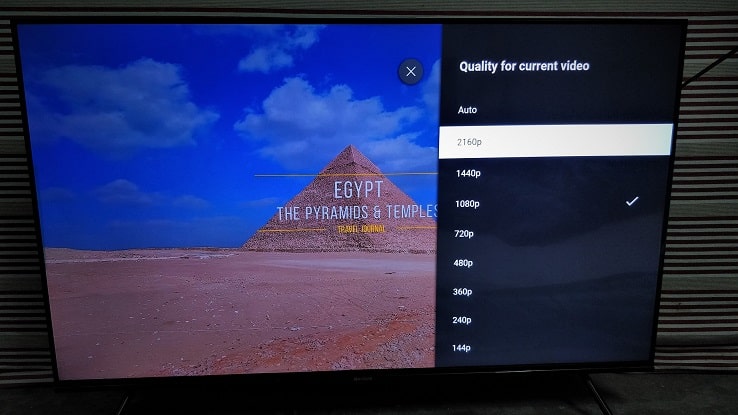 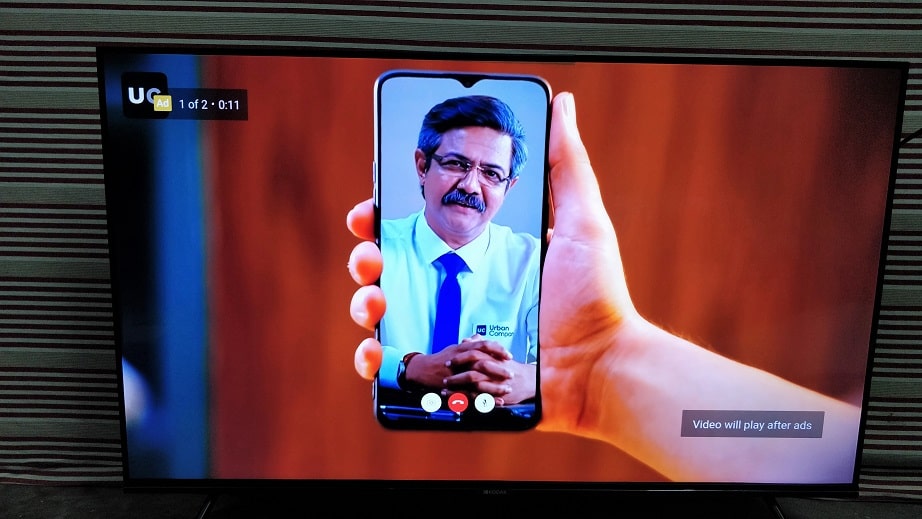 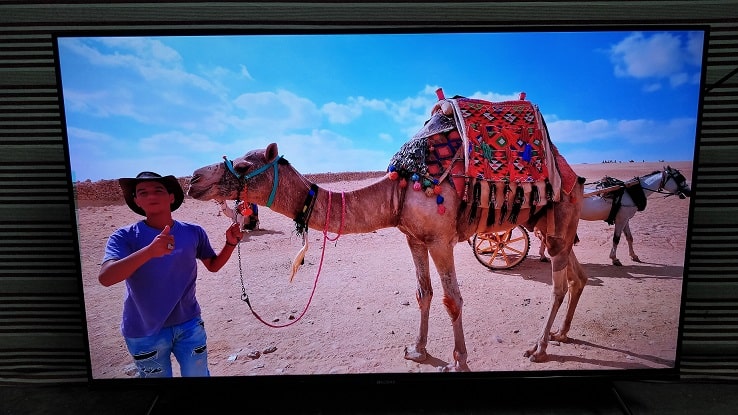 With a good 178 degree viewing angle side while viewing from the sides will not be there, yes, being an IPS LED Panel, the white shadow can be seen on the dark sides of a scene. Moreover, out of the box, the colors are set to rich but if you want to perform some changes the options are given there too. The user can modify- Brightness, Hue, Backlight, Contrast, saturation, sharpness in Picture settings; for Sound, the users can customize-  Bass, Treble, enable DTS (Digital Theater Systems), and more; well the company has also opted a Dobly competitor. By default DTS will not be enabled, the user can do that from the settings to get surround sound effects. 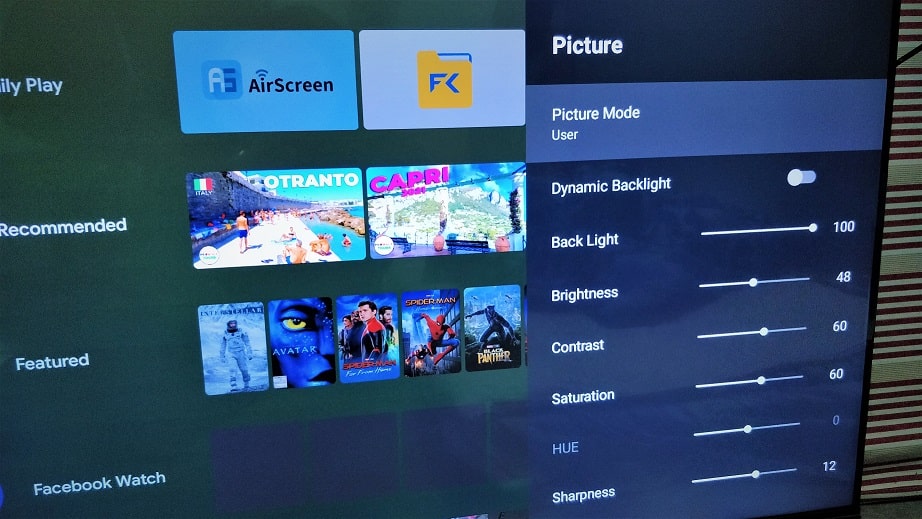 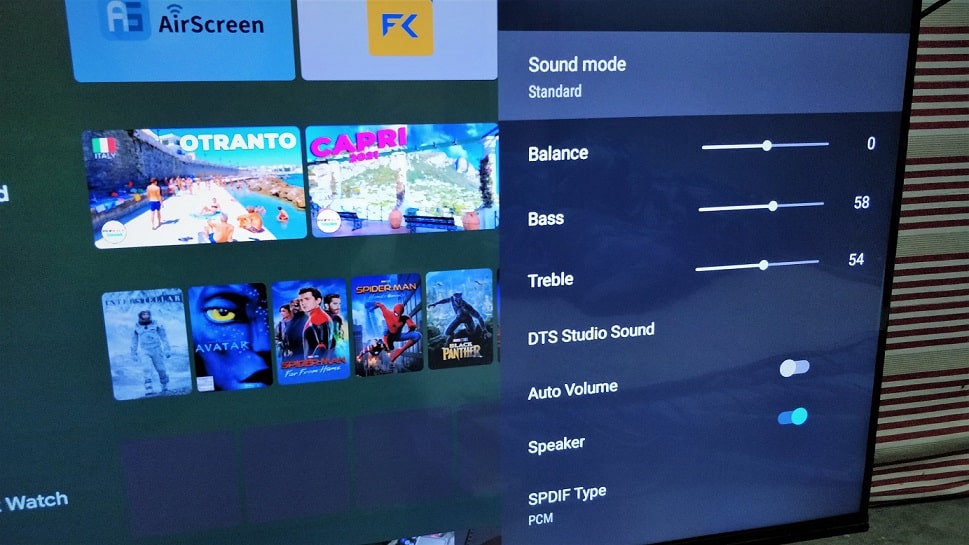 For standard TV channels via DTH where the channels are still in SD or 720, the upscaling doesn’t make any great difference and quality will not be up to the mark at all, however, if you are buying this TV then we recommend going for High Definition channels… Overall, the 4K HDR content on YouTube or via USB disk brings life to the Kodak screen. We didn’t find any jerks or noise while playing 4K videos.

Kodak CA PRO 43 runs on Stock Android TV 10 OS without any customization that adds responsiveness and provides easy to operate UI. Youtube, PlayStore, Google Play Movies, Netflix, and Prime video are some common pre-loaded apps. Apart from them, one more new addition is there i.e Facebook Watch – it fetches and lets the user watch popular videos available on Facebook uploaded by various users. Furthermore, the incorporation of the Google Play store out of the box gives us access to thousands of apps.

You will not have any complaints about its minimalistic interface approach. 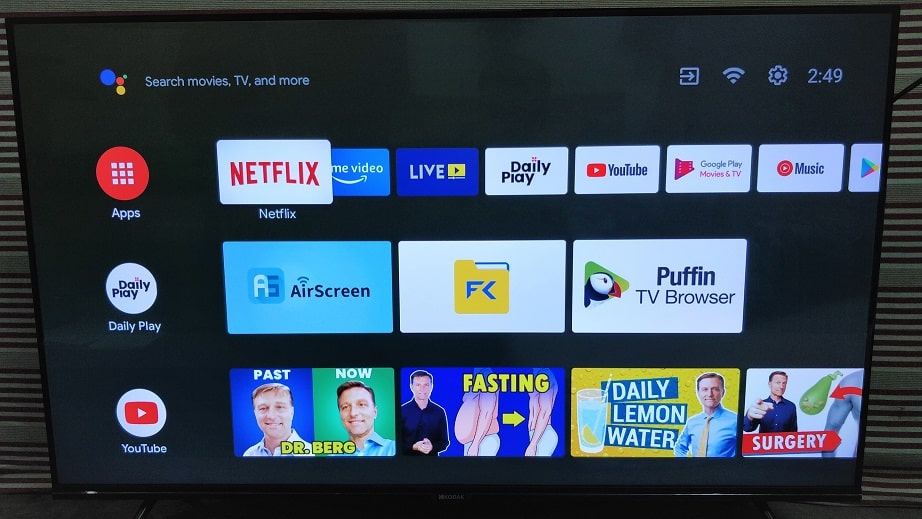 Kodak CA PRO 43 smart tv paired with 2GB RAM, 8 GB of Storage (4.4 GB is available to use) Amlogic Quad-Core processor, and Mali quad-core GPU tuned to run at 1.GHz. This pairing of hardware components is enough to deliver smooth performance even while switching between multiple apps. Also, as compared to the previous generation of Kodak, this one doesn’t take a long startup time or delay in the opening of apps or while navigating through its interface. However, as you start stuffing the TV with multiple apps then some sluggish would be there. Furthermore, no issues with voice recognition it worked well even the Google Assistant, just like your smartphone.

I remembered when it was a Sisyphean task to mirror smart screen display on Kodak TVs but now Woww!! it just a matter of touch. Having both smartphone and TV on a smart wifi network, it was just one touch on the smartphone Chromecast icon, and the content playing on the phone will be on TV. It was so simple and worked nicely.

Again compared to previous models this one offers an enhanced bass-rich sound production. The TV uses 40W RMS output speakers with Dolby MS 12 as a decoder and DTS TruSurround to eliminate the need for any external soundbar in general cases. However, if you are a music enthusiast and want a high degree of fidelity then, of course, an additional audio system is required.

Nevertheless, Kodak has done a great job this time in terms of sound. The TV can produce a clear soundstage makes users easily differentiate highs, mids, and lows even the audio is quite bassy, a delight for music lovers.

Start where you left:

If you have turned off the TV using the remote control, then next when you turn it ON, you will have the same screen or content which was playing last time, where you left it.

Most of the budget smart TVs available at this price would be Full HD, whereas the Kodak CA PRO 43 at ₹27,999 without compromising the true Android smart Tv experience offers a 4K experience with nice picture quality. Even this time the company has done a great job in the audio department. Also, Kodak has not loaded its TV with unwanted apps which gives enough storage to users for installing the apps they like.

It could be not a nice choice for professional gamers who have a good budget to go for premium Smart Tv otherwise at this price, right now, it is one of the best budget Smart TVs available to consider for personal and commercial usage.