KODAK, once an infallible camera brand, is now known for its TV brand in India. It doesn’t need any introduction, its long journey and trust created in the hearts of Indian consumers manifest everything. Well, I can remember the first smart tv of Kodak (SPPL) launched in India was not much smart, however, with continuous improvements and understanding the customer needs; now, Kodak already has fully Smart Android OS TVs with lots of features that we will discuss later in this article.

However, of course, having a good brand value doesn’t mark that every product under its umbrella would be perfect and value for money; we have to do some research before buying.

Well, yes the price is quite low as compared to other Smart TV brands available in the same range for example Samsung or LG. But will the user get good quality at this price, this we will find here.

Inside the box of the 7XPRO, the user will get all the necessary items such as 1 TV unit, Remote, Wall Mount Kit, User Manual, and two pieces of AAA battery. To match 42FHDX7XPRO with the current world trend which is a narrow bezel, the company has tried to imitate that as well. However, we can’t say the TV has a completely bezel-less design but being a budget series, it is quite impressive. It is the only bottom that is slightly thicker than the rest of the three sides to hold the logo, and a small chin below to host the power LED and IR receiver. Along with space to conceal two bottom-firing speakers.

The TV comes with both wall-mount accessories and black plastic stands so that a consumer can use it on the wall as well as on the table. Being a fairly slim design and not much protruding at the backside, when we hang it on the wall it becomes really difficult to access the backside ports. Therefore, to attach or detach some cables the user will face some difficulties, it is recommended to plug in all necessary cables before mounting the TV on the wall. 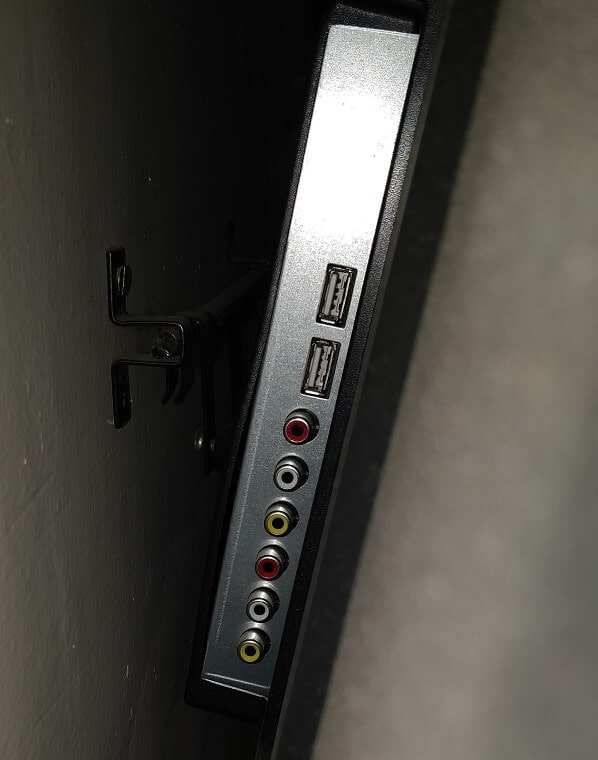 In terms of the wireless remote, Kodak has done a really good job, we don’t need to direct the Remote, particularly towards the IR module direction anymore to control the TV which was a huge problem in older versions of Kodak. Another thing that significantly improved is the remote size and design. It is now much smaller and more comfortable even people with small hands can now operate it easily. It features only the key options which really a user needs such as a Volume and Channel changer, App drawer, Menu, Mute, and Navigation along with shortcuts to Youtube, Amazon Prime, and Sony LiVe. Thus, the Remote is absolutely as it should be. 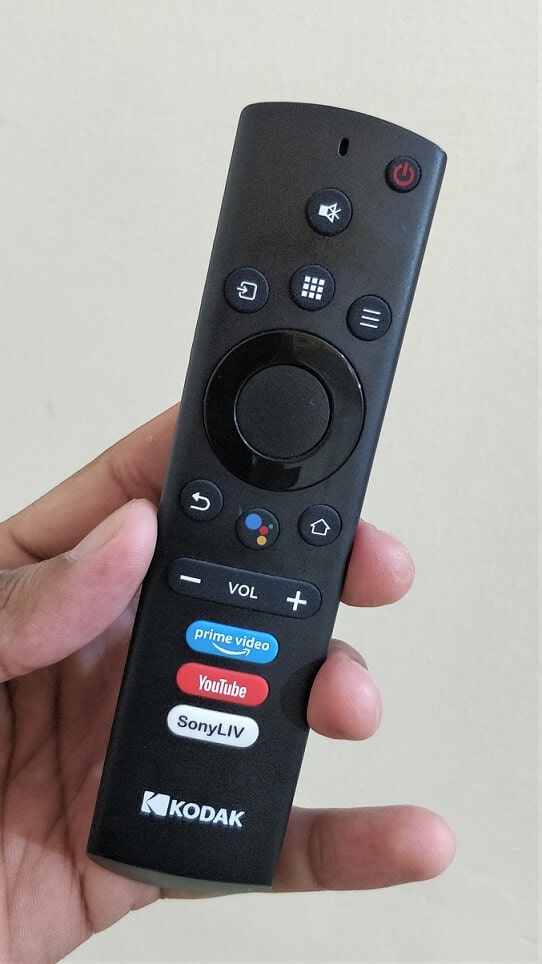 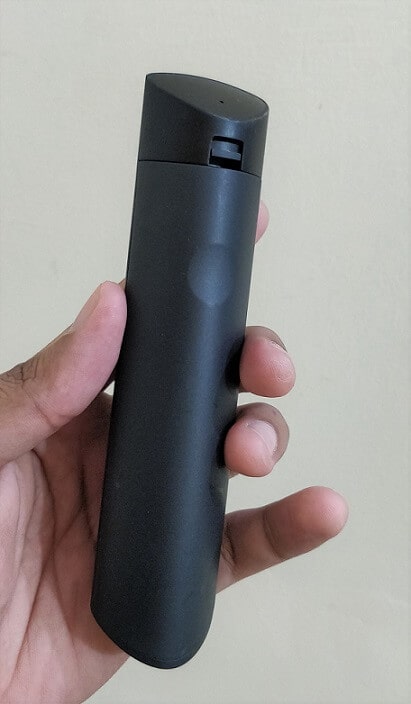 The Picture quality of our 42-inch review unit was impressive at 1080 resolution with a high brightness level of 500 nits. The support of 60 Hz was another added benefit one will get in the 42FHDX7XPRO series. It ensures that users can easily play and enjoy games over it, however, HDR10 is missing.

7XPRO IPS LED Panel with good 178 degrees viewing angle, contrast, and vibrant color production of the Display engine were standard and value for money, if we look at the price of the TV. While testing, we used various videos in which we found no light bleeding and darker areas were also visible clearly. Yes, being an IPS LED Panel, the white shadow can be seen on the dark sides of a scene. Moreover, out of the box, the colors are set to rich, thus wouldn’t need to adjust until you need some specific outcome, even if you want it is not possible to much extent. 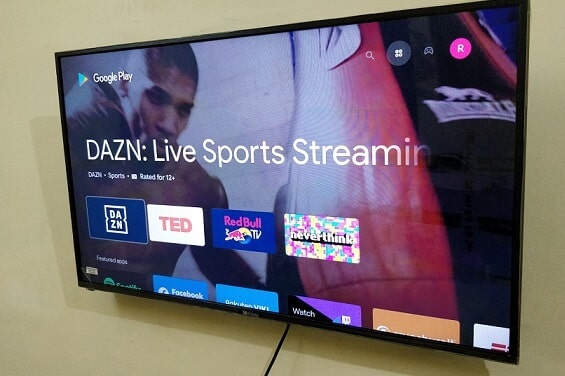 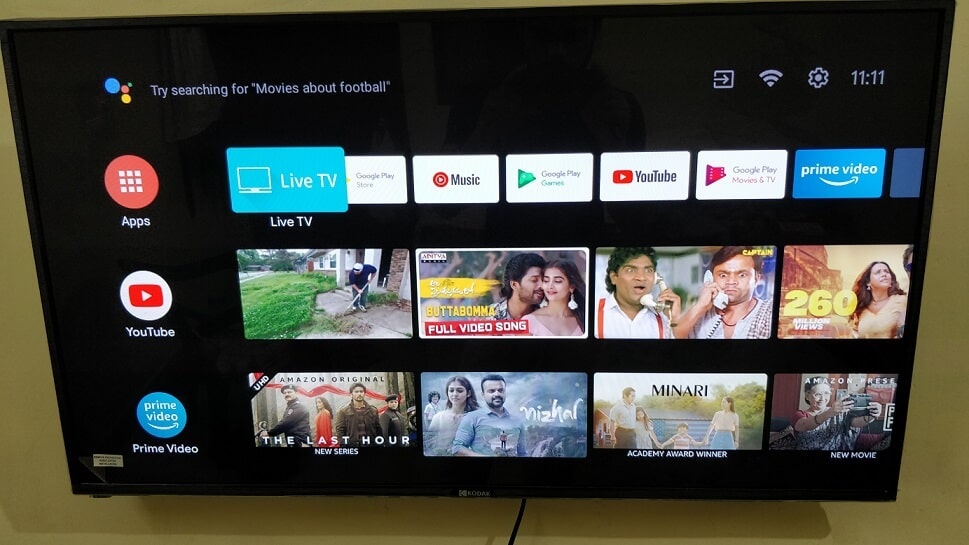 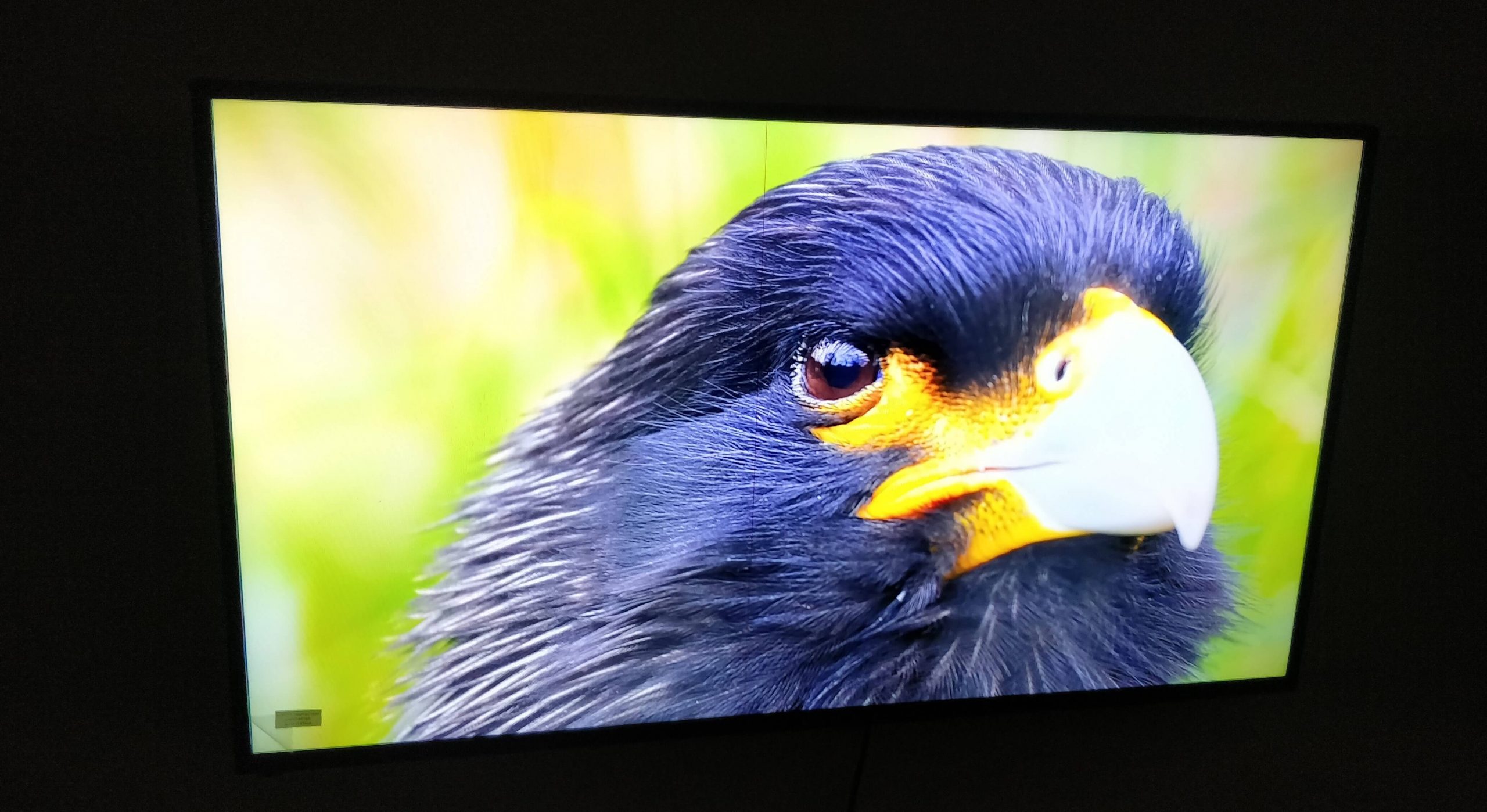 Without no upscaling technology, the regular DTH SD content generally available in all Indian houses will not look good at all. Because of the display size, it is recommended to go for HD channels. The good thing that users can play YouTube videos at 1080p. 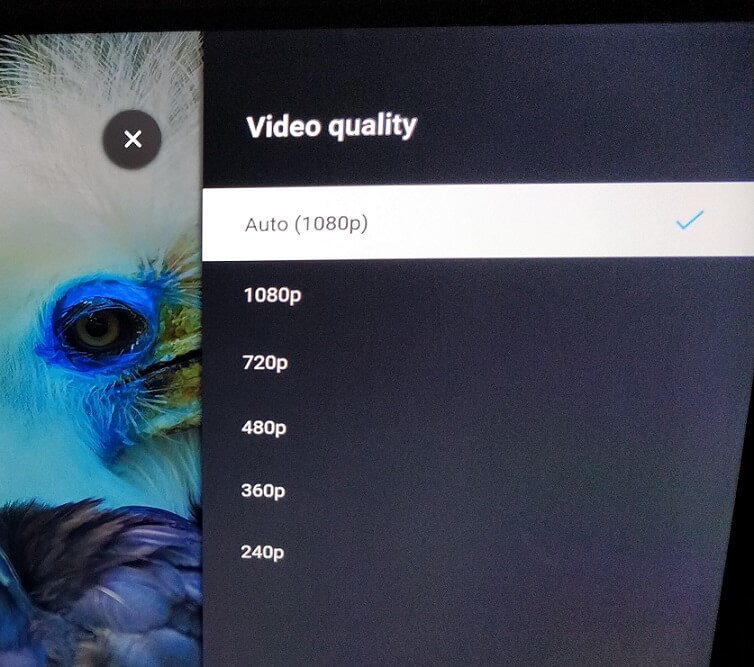 Coming to its interface which is not attractive but simple to use and understand. 7XPRO runs on stock Android 9.0 thus without any customization, it adds responsiveness and provides easy to operate UI. All the Apps can be accessed with just one click of the remote, frequently used apps will automatically start displaying on the TV UI to quickly access them. Furthermore, the incorporation of the Google Play store out of the box gives us access to thousands of apps available on it for installation. Apart from Play Store; Youtube, Amazon Prime, Google Play Music, Google Assitant, Disney, Hotstar, Zee5, Sony Liv & Movie are a few other apps that come as pre-installed. The weird thing is, the SonlyLive shortcut is there on the Remote control but the app for the same has not been installed on our review unit, thus we need to do that manually from the Play store. 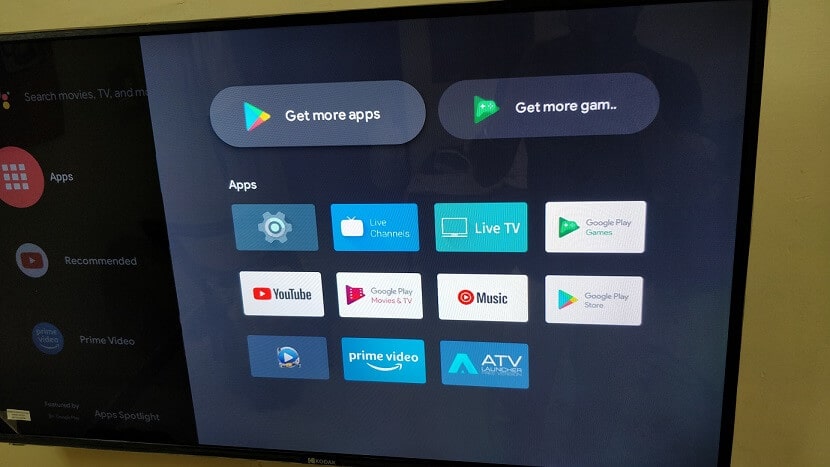 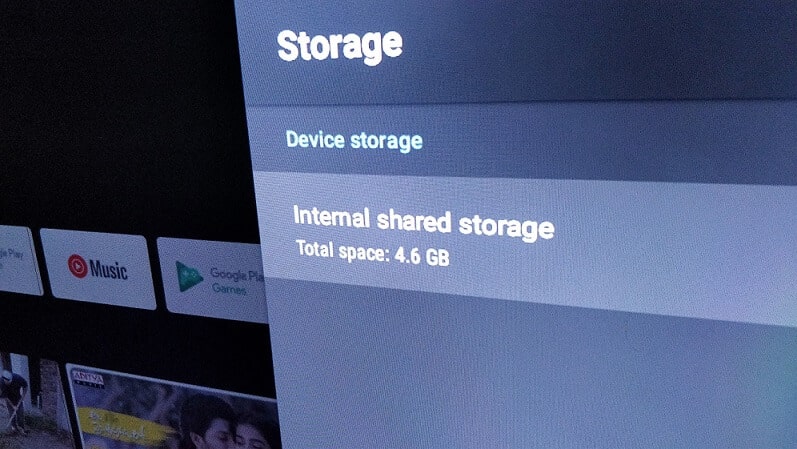 The biggest problem with the Kodak UI is the lack of various options that should be there, while during my usage, I couldn’t find the settings to customize Contrast, sharpness, etc. manually. Even for selecting the predefined picture and sound adjustments, we have to go on the Live TV or HDMI input source and then need to press the Menu button. I couldn’t comprehend why the customization options were not there and even the pre-define ones are hidden so deep that a normal user would get perplexed in actually getting them.

The Kodak 42FHDX7XPRO Smart Tv running on Quad-Core ARM Cortex A53 and for Graphics it has Mali-450MP3. For multitasking, 2 GB RAM and 8 GB Storage out of which around 4 GB is available for usage. The hardware is pretty decent to get the smooth performance and the same is true with the 7XPRO while our testing. Also, as compared to the previous generation of Kodak, this one doesn’t take a long startup time or delay in the opening of apps or while navigating through its interface. This results, in fluid performance without lags. For media, it supports MP4, MPEG, MPG, MKV, AVI, FLV, ASF video and MP3, MPEG1, MPEG2, MPEG2.5, AAC, HE-AAC, ASF, and WMA sound formats.

In terms of hardware, we didn’t face any problems except the MIC on the remote which was not working. Kodak 42FHDX7XPRO packed with two 24W speakers, the sound was loud and clear while watching the news and soap operas however, movies and music lack the expected thump. Thus, you need to invest in speakers or a soundbar to enjoy movies. Regarding accessing the content from the external media, we didn’t find any problem with that. We used 2TB of WD’s external drive and the Tv accepted it easily without any lag in performance. Even the 4K videos worked perfectly on the TV, of course at 1080p.

Well, the picture quality here is subject to your source. It depends on what you’re paying, such as while watching Star Trek Discovery the image was bright and vivid however sometimes the blacks are slightly grey. The color reproduction is good, at the price the 42FHDX7XPRO is available yet the only problem arises when the scenes in movies abruptly shift from dark to light.  The Kodak TV is good if you want a bright image for watching TV and want to invest in a Fire TV stick or Chromecast for your Smart TV needs.

TVs like Xiaomi, Kodak, Diawa, and all others trying to provide more and more Smart TVs at low prices, however, remember before purchasing a smart TV under the 20 to 25k price point that they are not going to give you the same quality as you will find in Smart TVs of the same size under 40-50K. Nevertheless, it is worth to be noted whatever Kodak is proving at such a low price is justice to the features coming in 42FHDX7XPRO.  So, if you are looking for a low-cost budget FHD Android smart TV, this 42FHDX7XPRO Kodak one is worth to be considered.

How to Change Default theme in Windows 11- Dark to Light