A firewall- as the name indicates- is a Fire like Wall that protects your network from unwanted intruders. Firewalls play a crucial role in the field of network security. These are devices that can be specified as hardware, software, or a mixture of both. It acts as a barrier to the outside threats and works on a predefined set of rules known as the Access Control List, by monitoring and controlling the incoming and outgoing traffic. It decides which traffic should get through and which one should be denied. A firewall is like a boundary or security personnel at the entrance who works for the safety of a system. 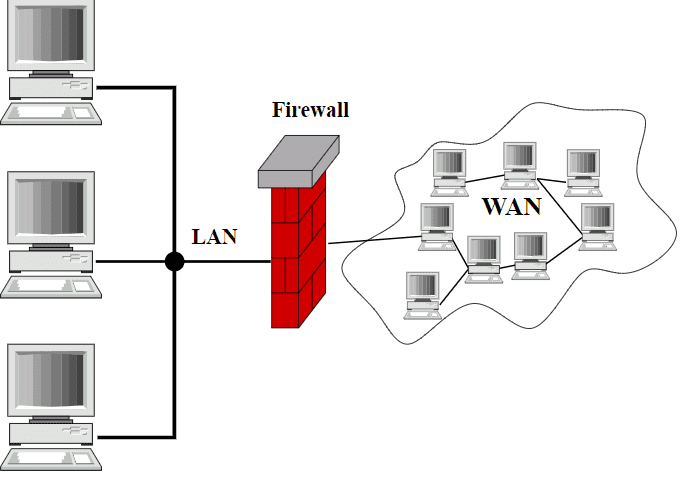 Well, there are three basic types of Packet Filters, Stateful Inspection and Proxy Server Firewalls, however, we gone one step ahead and tried to explain five types:

These firewalls are located inside your system. For example, You can find the firewall setting under the control panel option if you are using Windows operating system. It’s actually software that is working inside your machine to protect it from untrusted sources.

You can find several options there:

The antivirus software installed in your system also manages the settings of a firewall which can help prevent hackers or malicious software from gaining access to your PC through the internet or a network.

These firewalls are generally used in the form of hardware in large organizations to scrutinize the entire network and safeguard the company’s essential information. A host-based firewall is a part of your system software package but in the case of a network-based firewall, it is dedicated hardware that runs firewall software that solely works to protect data. Although it is not mandatory to have dedicated hardware as you can install it at any server you want but for better performance, the dedicated ones are recommended.

Every organization has an internal network which can also be called a trusted network, which is used by authenticated personnel of the company. Then, there is an external network known as the World Wide Web or Internet which is public and full of threats, therefore is referred to as the untrusted network. A company’s firewall checks every data packet which tries to enter the company’s internal network or log in to the private server and prevents it from harming the organization’s internal server.

What is a Data Packet?

Whenever we download any file from the internet it does not get downloaded altogether. The file is divided into smaller packets that arrive at our system one by one in a particular sequence. Some of these packets contain the information about the sender and receiver’s IP address along with the actual data that we wanted to download known as the payload.

There are seven layers in the networking architecture or OSI (Open System Interconnection) model which are as follows (from bottom to top):

Packet filtering firewall is also known as Layer 4 firewall. It is a better performing firewall as it works on the Network and Transport layer.

Depending on the nature and size of a business, IT departments use different types of Next-Generation Firewalls to operate.

If any organization wants to ensure that it has the right NGFW, here are few tips to consider:

Which Firewall will be best suited for which environment?

One can choose a firewall as per the need of their environment.

Top 7 gadget gift ideas for your brother this Raksha Bandhan

How to Send Creative Text and Emojis in WhatsApp

Firewall – Know about a System that Protects your Network & PC