What is fast charging technology and how it works?

In the era of smartphones, we have witnessed the upgrade of processors from single-core and dual-core to quad-core and eight-core. It is not surprising that the ten-core is now out; high-end mobile phone cameras almost replaced the point and shoot cameras. The same is true for the size of the screen. 4 inches, 5 inches and now 6 inches or more with a notch or a full view screen with almost 99% screen to body ratio.

But the only regret is that the technological innovations in mobile phone batteries are still slow, and the battery life is not enough to meet the daily use of users, which is still the biggest pain for manufacturers. For this shortboard, the common practice of mobile phone manufacturers was to equip the large-capacity battery under the premise of the balance of the thickness and weight of the mobile phone, but this is very limited. However, with the birth of the fast-charging technology that has taken the lead in the past two years, it seems that the whole industry has seen hope. After some exploration, many mobile phone fast charging solutions have emerged. 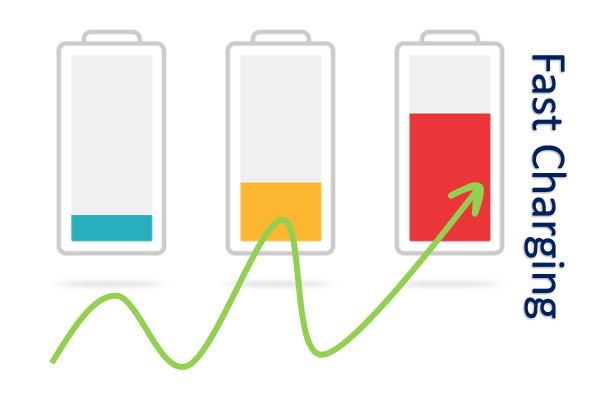 So how does the phone charge quickly? How is it implemented and is it safe? What are the other types? What technological innovations will there be in the future? Today we will come to answer these questions one by one.

1. Raise the current when the voltage is constant;

2. Raise the voltage when the current is constant;

3. The voltage and current can be increased at the same time to achieve fast charging.

For the relationship between power and current and voltage, we can make a simple analogy. This is like you fill a bathtub with water. Increasing the voltage and current is like increasing the water output per unit time and the water flow speed. When one or both of the parameters are increased, the water filling efficiency is naturally improved and the bathtub is quickly filled. At present, many manufacturers’ fast charging solutions rely on the voltage boosting (or simultaneous boosting of the output voltage and current).

Qualcomm is the solution provider of fast charging technology. Currently, in the fast charging technology of smart phones, Qualcomm’s Quick Charge 3.0 solutions are used by mobile phone manufacturers and are widely used. However, the Qualcomm Quick charge 4 and 4+ are the latest version but it still takes some time for all mobile manufacturers to jump from 3.0 to 4+. Few companies those already implemented the 4+ in their few phone models are Razer Phone, ZTE, BQ, Smartisan, HTC, LG, and Xiaomi.

Now Qualcomm Quick Charge has been upgraded to version 4 & 4+, which are more efficient than the previous version 3.0 & 2.0.

In all time and efficiency, Qualcomm said that Quick Charge 3.0 can charge a typical mobile phone from zero to 80% in about 35 minutes, while ordinary mobile terminals usually take about one and a half hours.

MediaTek also proposed its own fast charging solution, Pump Express, which is built into the PMIC’s power management IC. Its characteristics allow the charger to determine the initial voltage required for charging according to the current. The pulse current command sent by the PMIC is transmitted to the charger through the USB Vbus. The charger adjusts the output voltage according to this command, and the voltage gradually increases up to 5V to reach the maximum charge.

Currently, there are two technical specifications, the output power is less than 10W divided into Pump Express, and the output power is greater than 15W divided into Pump Express Plus. The above-mentioned MediaTek’s fast charging method has been developed by Tongjia, Dialog and other power chip manufacturers to develop exclusive power management ICs. This solution is common in the mid- and low-end smartphone products.

Recently, the USB Type-C, which is relatively hot in the mobile phone circle, has improved its own power supply capability (USB Power Delivery Specification, USB PD for short) in addition to the data interface and the change of the transmission rate. Type-C is currently support for connection to 20V/5A power supply. With the launch of more mobile phones equipped with USB Type-C (USB 3.1) interface in the future, the market prospects are also very broad.

Beside the above mentioned fast charging technologies a few others are also there in the market:

Samsung Adaptive Fast Charging: It is not the common one and uses to charge the phone fast either increasing the Voltage or current. Phones like the Samsung Galaxy Note 8 uses such type of fast charging technology along the Qualcomm Quick charging. Know more

OnePlus Dash Charging: It is similar to Oppo VOOC constant the voltage and increases the current to achieve the fast charging in their phones like OPneplu 3, 5 & 6. Know more.

Huawei SuperCharge: A technology developed by the Huawei to charge their phones instantly works by varying the voltage and current to achieved desired fast charging rate. Know more about

Anker PowerIQ: The approach of the Anker Power IQ is a bit different. Rather stick with one manufacturer brand it can work with most of the phone’s fast charging circuitry by varying the voltage output. Basically, it determines the connected device fast charging requirements and optimizes the charging speed according to that. It can produce 5V/1A, 5V/2.4A, 5V/2A, 9V/2A, and 12V/1.5A. On the ground level, it is the same as the Qualcomm Quick Charge.

Anker deal in the power adapter and power banks and you can easily find out the PowerIQ technology in that.

What is the difference between high/low voltage fast charge technology and where are the deficiencies?

Since the effect of quickly charging the mobile phone can be achieved, what are the main differences between the high voltage and low voltage modes? Before explaining the difference between the two technologies, let’s take a look at what a traditional 5V/1A slow charge is.

When the conventional charging is performed, the input terminal is converted into a charging current output of 5V/1A after passing through the charger. In this process, there is a step-down conversion, and all the energy cannot be converted 100%, and the lost energy will become heat. Specifically, when we use the charger to charge, we can feel the charger has different degrees of heat.

Let’s look back at the difference between high and low voltage fast charge.

The conversion of high-voltage fast charge (including Quick Charge, Pump Express, USB 3.1 PD) is from 220V,110V or 240V (depends upon the country where you live) to 20V/12V/9V to 4.2V/4.4V, which means that this solution will make the charging terminal have higher voltage which given as an input to the phone’s buck circuit (DC to DC converter). Then the mobile phone step-down circuit will withstand greater pressure for the conversion, of course, this conversion process loss is also more, directly manifested that the body heat is more obvious when the phone is charging.

OPPO’s VOOC flash charge low-voltage fast charge is directly reduced the incoming voltage 220V,110V or 240V to 4.2/4.4V. All the step-down steps in the charging process of the mobile phone are completed in a charger equipped with a smart MCU chip, which can directly convert the 220V current into a 4.2/4.4V current that can directly charge the lithium battery. That is to say, the step-down circuit in the mobile phone is not called when charging, so the temperature rise control during charging is good, and there is no obvious heat generation.

Therefore, temperature rise control will bring an obvious advantage, that is, the entire fast charge experience also can be said to be flash charge performance, is very superior. Here is a scene as an example: For example, we use low-voltage flash charging to charge the mobile phone, you can charge while playing games, no matter how big the game is played, it will not affect the work of flash charging. Instead of high-voltage fast charge, this may generate two heat sources: one step-down circuit heat, and one mobile phone’s CPU heat. In this way, the fast charge can only last for a while, in order to keep the temperature within the safe range, the mobile phone can only be charged back to normal charging.

Of course, each program has its own advantages and disadvantages. In terms of low-voltage charging, OPPO currently holds a large number of patents. The technology is limited to OPPO’s own products, and naturally restrictions on compatibility for consumers. The specific performance is that the OPPO mobile phone has its own custom charger, 8 charging adapter and 7 pin interface charging cable. If you change the charger or the Android data cable with other mobile phones, then the flash charging will not work.

Note: Fast charging also depends on how much the phone’s charging circuit can bear or accept. if you have it plugged into a 5V/3A adapter and if it only able to handle 5V/2.4A then that’s the rate at which it will charge.

Since it is fast charging, the future development direction is naturally faster than faster. The biggest development bottleneck of the low-voltage fast charging solution in the future is on the battery. The output power of the charger can be very large, but how to make the battery can withstand such a large current input is the next consideration.

We all come across files that are a few Gigabytes or Terrabytes in size. We can easily back them...
Read more

Akaunting software which is a free and open-source web-based application for finance & accounting purposes. Here we will see...
Read more

Future of the Gaming Industry in India 2020

With the population of 1.3billions, India automatically becomes the biggest market for any industry if even...
Read more

We get hundreds of emails every single day, and among all that we get, only a handful of them,...
Read more

Top 10 myths related to technology that you should stop believing

Today, when we talk about tech, the 90’s kids and the Millenials mostly refer to the latest smartphones, LED...
Read more
- Advertisment -
- Advertisement -

Anker recently has announced the launch of...
Read more
news

ROAV by Anker forays into Indian Markets with a...
Read more
news