Just like every year, Google is here with its new dessert that offers a slightly better taste, if not completely new. In every new version of Android, we all come to find some small and big improvements over its predecessor. The latest version of Android, i.e. Android Q, isn’t an exception to this practice, as well. Kudos to Google for making some nifty improvements and introducing some features, the Android fans had been wanting for so long.  The Beta 1 of the 6 betas before the final release of Android Q is out, and the features I will be discussing here can be just the glimpse of the whole new Android Q, that should be available in the 3rd quarter (Q3) of 2019.

The final name of Android Q is not yet known, but I am sure, it will have the name of some mouthwatering dessert, just like every other previous version of Android. The beta version of Android Q is now only available for Google’s own Pixel devices, and you can download the images from the following link. Chances are there, the Android Q beta should be available for other flagships, as well in the coming months, just like Android P was available the last year. Google might just be giving the exclusivity to the Pixel devices, as it is the first beta.

Contents show
Before you proceed
So let’s find out the bouquet of the cool new features available on the beta 1 of Android Q.
Better control over your privacy
Native screen recorder
A system-wide dark mode in battery saver
Sharing Wi-Fi networks now easier
Free-form mode for foldable devices
Theming option now available in Android Q
Some nifty other changes

Before you proceed with installing the Android Q Beta 1 you should keep some important points in mind. 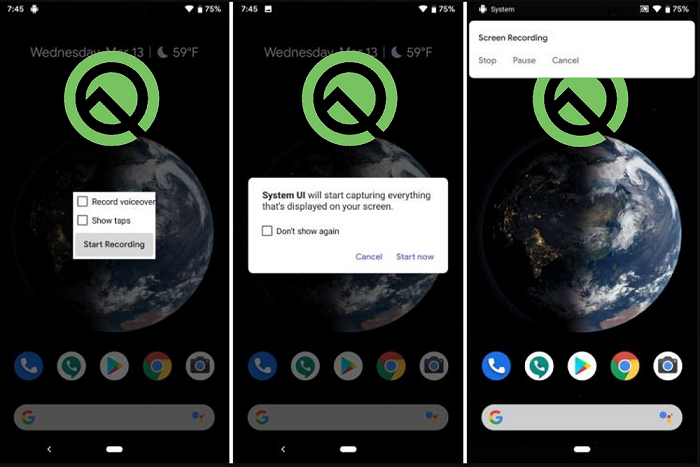 So let’s find out the bouquet of the cool new features available on the beta 1 of Android Q.

Privacy is one of the most important aspects today when we install a ton of apps, and some of the notorious ones are known for secretly spying on you and see your sensitive data. With the latest version of Android i.e. Android Q, you can have more controls over your privacy by limiting the apps to access selected personal information only if you trust them. You can limit access to your personal information like photos, videos, and documents from apps that you don’t trust. Cool! Isn’t it!

You can even restrict the apps from tracking your pinpoint GPS location when they are running in the background. The location access page is a lot more revised on Android Q to help you quickly find which apps are accessing your location. This is really a big improvement to retain your privacy and sensitive information on your smartphone. The ball will be in your court when it comes to privacy settings on the latest version of Android. This feature is already available on iOS and will be now available on Android as well. Long live, Android!

Users have been wanting a native screen recorder for quite some time on Android, and the latest version of Android has got you covered. Android Q now features a native screen recorder, which can be useful to record screen along with the taps, audio from microphone, which is really handy. The feature though will not be available by default, and you will have to enable it from the feature flags within the ‘Developer Options‘ menu.

Once the feature is enabled, you can start recording the screen by long tapping on the screenshot button in the power menu. The feature isn’t fully bug-free now, but it should be, in the next beta releases or at least in or before the final stable release of Android Q. So no more worries to help your grandparents accomplish a simple task, as you can effortlessly send a video illustrating the way to do the same.

Now it is something, the users had been longing for quite long. A dark mode is now available on Android Q, and it can be enabled by turning on the battery saver from the quick toggles. This is something really great and can be handy for users having a smartphone with a Super AMOLED display. The system-wide dark mode though has some problems now, with some apps, but there is a long way to before Android Q is finally released. Thus, we can all expect that the final release will be free from issues.

In the future beta releases, the dark mode can also be enabled without the need of enabling the battery saver mode altogether that impose other restrictions as well, which can clip the performance of your smartphone. What exactly happens, at last, is yet to be seen, but the dark mode that is available now, is undoubtedly handy, and I am happy with its arrival on Android.

On Android Q, you can easily share Wi-Fi networks by creating QR codes, which can be scanned by others who want to join the same network. There is also an option to scan QR codes in the ‘Add network‘ option to scan a QR code and connect to a Wi-Fi network without a lot of manual effort of entering the passwords, and other related hassles.

Not only that, Android Q will now use randomized MAC addresses while connecting to a new Wi-Fi network, which can be useful to mask your location or activities related to movements. This feature was available in Android Pie as well, but it had to be configured, while this feature will be enabled by default on Android Q.

There is a free-form mode now available in Android Q to help you run apps without covering the whole screen. You can move the app to run it in any part of the screen, and this feature can be very handy for the upcoming foldable devices. Just enable the free-form mode feature from the ‘Developer Options’ menu, and you are ready to go. Once you have activated the feature, open the list of recent apps, and enable free-form to run the app in free-form mode.

With the first beta of Android Q, you can run only a single app in free-form mode, but hopefully, Google will broaden the scopes of the free-form mode to run more apps in the mode. The free-form mode will be handy for a number of devices having a large display, and it can be used for single-hand usage on stock Android devices or devices that don’t feature a one-hand display. The feature though needs some homework, but I don’t think Google will remove the feature in the final or stable release of Android Q.

Now you can change the look and feel of your Android device by visiting the ‘Developer Options’ menu. In the theming section, you can change the system-wide accent color to black, green, purple from the default blue color. This isn’t a big improvement, but something is always better than nothing. Using the black accent color can help you enjoy a classic theme with or without the dark mode enabled.

There are other two options available, as well, one to change the font, and the other to change the icon shape across-the-board. The new font isn’t that impressive, but I am sure, Google will add new fonts in the upcoming beta releases, as well. Unlike Android Pie, the icons in the quick toggles will also be changed to the selected shape by changing the icon shape in Android Q.

Some nifty other changes

These are the improvements in the first beta release of Android Q. More changes will also come the way. But apart from the noticeable changes I discussed above, there are some other small changes, as well. The notifications can now no longer be deleted by left swiping, instead, the snooze controls will open with a left swipe. On pulling down the notification dashboard, you can now see the estimated switch off time or the battery remaining time, which should be quite handy in different situations.

On removing items from the home screen, you can reverse the same by tapping on the ‘Undo’ button that should appear below the screen. The share panel is now a lot simpler, and you can share things even faster on Android Q. Something that is pretty interesting in Android Q is that the screenshots will now have notches and now you can show your friends that you are a part of the trending squad by having a smartphone with a notch.

A lot of user’s demands has been fulfilled in the first beta of Android Q, yet there is a long way to go. It is yet to be seen, whether all the features will make it to the final release, as Google might discontinue certain features if they don’t find them to be too useful. There will be improvements to the features mentioned here, in the next beta releases for sure, and we can even see the origin of some more new and interesting features.

Hope the information was helpful for you! Which Android version are you using, and what can be the name of Android Q? Leave what you think, in the comment section down below.

What Are the Major Reasons for Making Money Online & Money-Making Mistakes to Avoid?