Recently, the world witnessed the largest ever e-commerce acquisition. Walmart paid a whopping $16bn to acquire the majority stakes in India’s Flipkart.

Walmart is undoubtedly a trending name. It has succeeded in making a name for itself in the sale of groceries. Moreover, its discount departmental stores and hypermarkets have become a household name in the USA. However, the picture is not as rosy as it seems to be. Walmart is under a period of stagnation and is worried about the lack of growth in its consumer base. Its offline stores have hardly attracted more consumers, and in the USA its online stores barely have more than 3% of the sales. 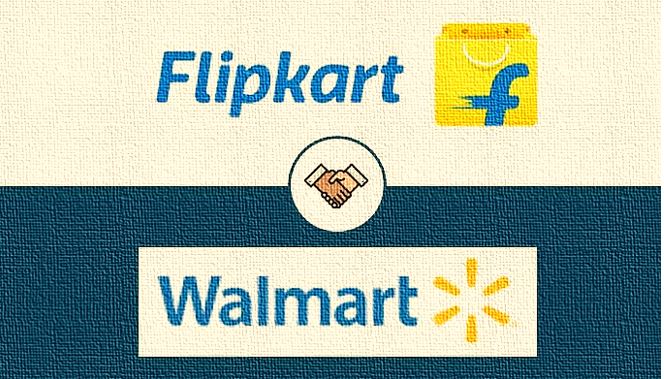 On the other hand, Flipkart is a favourite among Indians. All of you must have ordered something or the other from this reliable online store. Sachin Bansal and Binny Bansal founded it. Since its foundation in 2007, Flipkart has grown to be the largest e-commerce company in India and has attractive, lucrative investment from all races including Microsoft, Tencent, and Softbank. However, you must note here that even this profit-making venture’s shares suffered a loss of 4% when Walmart finally paid the hefty price for acquiring it.

Contents show
Was Flipkart Worth It?
The Business of Flipkart
Why did the stocks of Walmart face a crash after the announcement?
The Benefit of Flipkart from the deal
Profit of the deal to other investors in Flipkart
Walmart’s Contribution to Flipkart

Was Flipkart Worth It?

India has the second largest population in the world and is the seventh largest country in terms of territorial expansion. Moreover, the purchasing power capacity of Indians is on the rise. Factors like these made India an attractive market for Walmart, and it couldn’t resist itself from breaking a leg at harnessing the enormous retail marketing potential of this country.

Walmart has even gone to the extent of making the ambitious claim that India’s e-commerce market which was pegged at just $38bn in 2017 has the potential to rise to up to $200bn by 2027.

Despite several moves made by the party in power, digitalization of the entire nations is still not successful. India has improved its world ranking in the same, but there is still a long way to go. There is a glaring digital gap between the rural and urban areas and between the haves and have-nots. However, Walmart is optimistic about the situation. It has predicted that the e-commerce market which barely makes up 4% of the Indian retail market, will witness a boom in the next decade with more and more number of people opting for smartphones and having personal internet connections.

The e-commerce market of India though has enormous potential in future is relatively restricted at present with just 100 million consumers. Walmart merely had 21 cash-and-carry stores in India that sold retail products to other businesses. However, with this acquisition, it is all geared up for its first ever direct venture into the Indian market. It is highly optimistic about the possibilities and aims to maximize its profits.

Another interesting side of this acquisition is the effect of the same on the business competition between Walmart and Amazon which has over 44% of the e-commerce market in the United States of America.

The Business of Flipkart

Flipkart was on a roll in the recent dates. Its sales had boosted like never before. By 2016, the sales of Flipkart had grown by over 50%, and it had sold products worth $7.5bn in the financial year that ended in March 2018. The figure of its net sales was no less. If we exclude the discounts, returns, and cancellations, the total sales of Flipkart were $4.6bn.

Now, one question that might have popped up in your head as if Amazon and Walmart are business rivals, why didn’t Amazon make a bid to acquire this Indian e-commerce, giant? Amazon did try for a merger. However, the effort was unsuccessful as if the merger would have been completed, it would have to face the wrath of India’s antitrust regulator as the combined sales of these two companies would have gobbled up over 90% of the e-commerce.

Why did the stocks of Walmart face a crash after the announcement?

The opinion on this acquisition was entirely different in the United States of America. It was opined that Walmart had overpaid for the purchase of majority shares in Flipkart. This widely held view was reflected in the crash of the prices of stocks to their lowest inter-day rate since October 2017. Walmart had to face severe rash from the market for this decision. The retail market giant lost about $10bn of its market capitalization post the announcement of the deal.

People in the USA feel that Walmart has paid extravagantly for acquiring Flipkart because the Indian company is not expected to make massive profits in the coming years. They are also looking pessimistically at the current size of the Indian online retail market which is just 100bn consumers from a total population of 1.3 million people. The same optimistic view held by Walmart is not reflected in the people of its native nation. Walmart has completed this deal because it comes with the promise of the fastest entry into one of the fastest growing online retail markets in the world.

When asked about the deal, Walmart specified the perks of the same which include the merger of diverse retail expertise, merchant supply chain knowledge and financial expertise of Walmart with the talent, technology, customer insight and innovative culture of Flipkart which is sure to bring heaps of profits to the organisation.

The Benefit of Flipkart from the deal

We talked a lot about the perks that Walmart will enjoy after the acquisition of Flipkart. But is this deal profitable for Flipkart too? The answer is a yes. According to the experts in the field, the venture is now valued at more than $20bn after its acquisition by Walmart.

There was a “cash race” between Amazon and Flipkart. The lucrative offers and discounts that you spot on billboards all over the city tend to burn a massive hole in the pockets of the owners. In the same race of associating more and more offers with the Indian festivals, Flipkart was losing out to Amazon and was slowly running out of cash. On the other hand, Amazon was in a robust position and could easily afford the money because of its vast market worldwide.

The business of Amazon is not just limited to online retailing. It has also managed to gain considerably from its cloud computing service. Amazon as such is a huge organization and even has the cash to take on the new websites and further expand its reach.

Flipkart, on the other hand, is not as firm as Amazon. In this hour, it was in dire need of the financial supported provided by Walmart. The co-owner, Sachin Bansal, and several other investors, in fact, enjoyed a highly valued and profitable exit after the successful completion of this deal.

The acquisition of Flipkart is esteemed to be the highest price paid by a foreign investor for majority stakes in an Indian venture. With this record, the status of the owners of Flipkart has elevated to such an extent that from mere role models for the aspiring businessmen, they have become demi-gods.

Profit of the deal to other investors in Flipkart

Flipkart’s total valuation is at $20bn. In this situation, the investors who decided to exit landed up with a fantastic deal. Take, for instance, Accel and Tiger Global, for whom the deal turned out to be phenomenal. This venture capital had invested in Flipkart eight years ago when it was valued at just $50mn. Now, with a substantial increase in its valuation, they have earned almost 400 times of what they had put in.

Another jubilant example is the profit to Softbank Vision Fund which had invested $2.5bn recently in August 2017. In less than a year of the investment, the company has earned $4bn.

The co-owner, Binny Bansal, has, however, decided to retain his stake. Other organizations which have decided not to exit at this point include Microsoft, eBay, and China’s Tecent.

Apart from the monetary gains, are there are other sectors where Flipkart can hope to gain after this deal?
Walmart is a household name in the USA. The online retailer of USA is much more vast as compared to India. Thus, Walmart’s expertise in online groceries and a reliable food supply chain is praiseworthy.

Walmart is already sourcing a lot of products from India which include handicraft, apparel, food products like rice etc. After this deal, the pace of this exchange is only expected to ramp up.

However, there was only one unfortunate incident associated with the entire deal which was the departure of the co-founder Sachin Bansal. The departure of this talented and experienced man who has seen the ups and downs of the organization is heartbreaking. Walmart saw no point in keeping both of the co-founders on board of the ten-year-old company. Flipkart could have never achieved its current stature without the contribution of a visionary like Mr. Sachin Bansal.

G Suite Basic vs Business: What is the Difference?

Technological advancements that will transform the landscape of the retail industry

StoreHippo aims to be the #1 ecommerce solution provider: Mr.Rajiv Kumar Aggarwal, CEO and Co-Founder of StoreHippo