It would be a sound little bit weird that in 2020 when everything is getting wireless, the market is still flooded with wired in-earphones. Perhaps, should not because yet most of the budget to premium smartphones including laptops and other devices features the evergreen 3.5mm headphone output port. Actually, the other thing why wired headphones haven’t weared-off from the market is low cost and no worry about to charge them. Whereas in the case of Bluetooth earphones, the user has to charge both smartphone and earphones to get the benefit of music. However, Bluetooth earphones have their own benefits, well we are not going to talk about that much because here we have AMX One X in-ear headphones.

Now lots of you haven’t heard about this brand before because it is comparatively new in the market but with solid offering in the budget range.

AMX is an Indian brand that deals in consumer electronics, company’s headquartered in New Delhi. However, the official website has limited products hitherto and the company keeps working to provide more quality products.

Recently, we tried their AMX One X in-earphone to which actually we didn’t give much attention int he beginning until we opened the product box. And in this review, we let you know why that happened.

Initially, after going through the price of One X on Amazon.in which is just ₹579, we thought how good it would be, just like any other low budget earphones this one would be the same. But I admit, we were totally wrong. The way the earphones were packed and has been designed, they can really compete to premium earphones coming between 1000 to 3000 rupees. Yes, in sound quality there is one thing which needs to be addressed, will talk about it later in the performance section. First, have a look at its specifications and design. 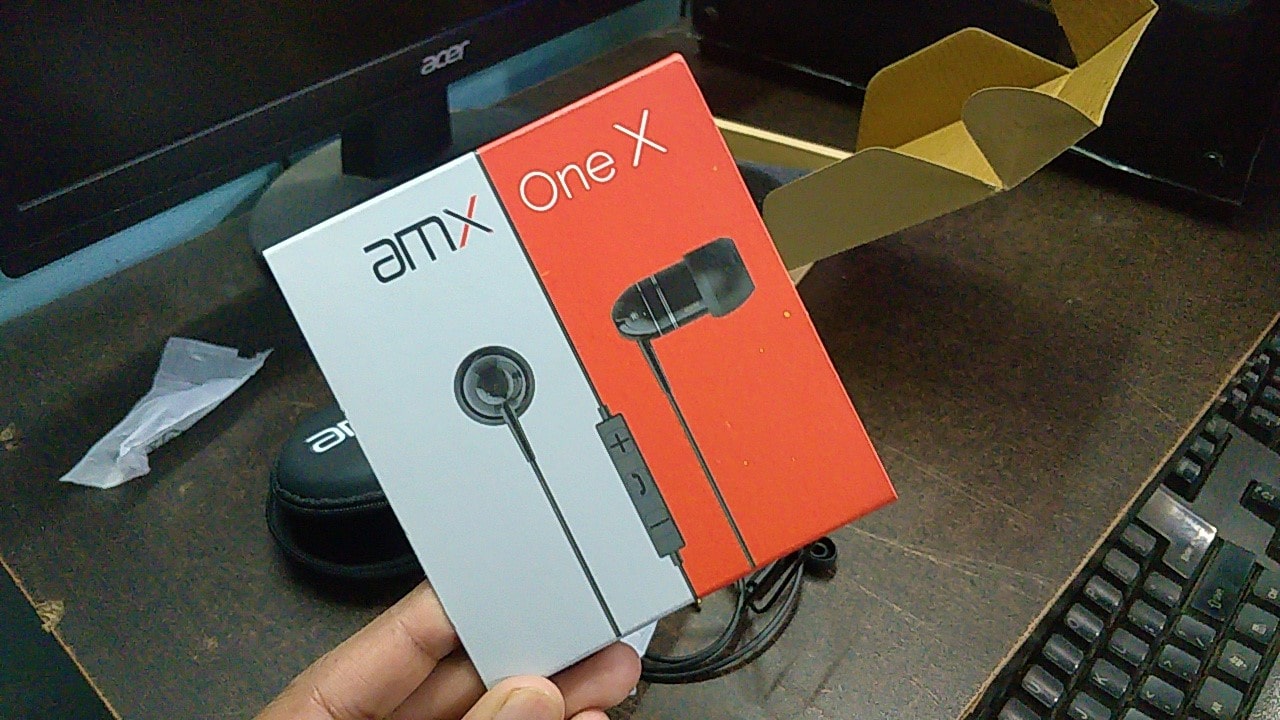 Being a budget in-earphone the design of the AMX One X doesn’t feel cheap from anywhere. It appears that the company has done well research on the designing part which clearly can be comprehended by anyone at first sight.

To protect the earphones, the company has given Premium Carry Case which generally seen in costly audio products. We can carry both earphones and additional earbuds in it. The size of its is also quite small that one can easily carry in the pocket without any discomfort. 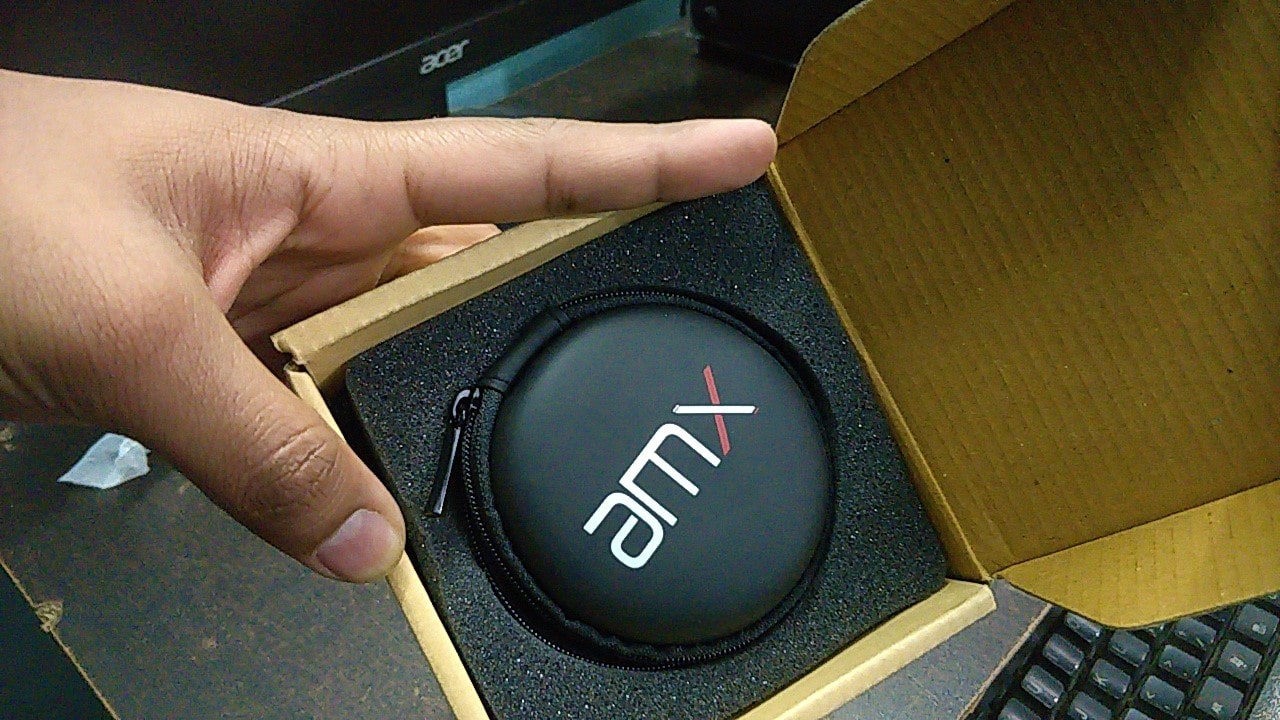 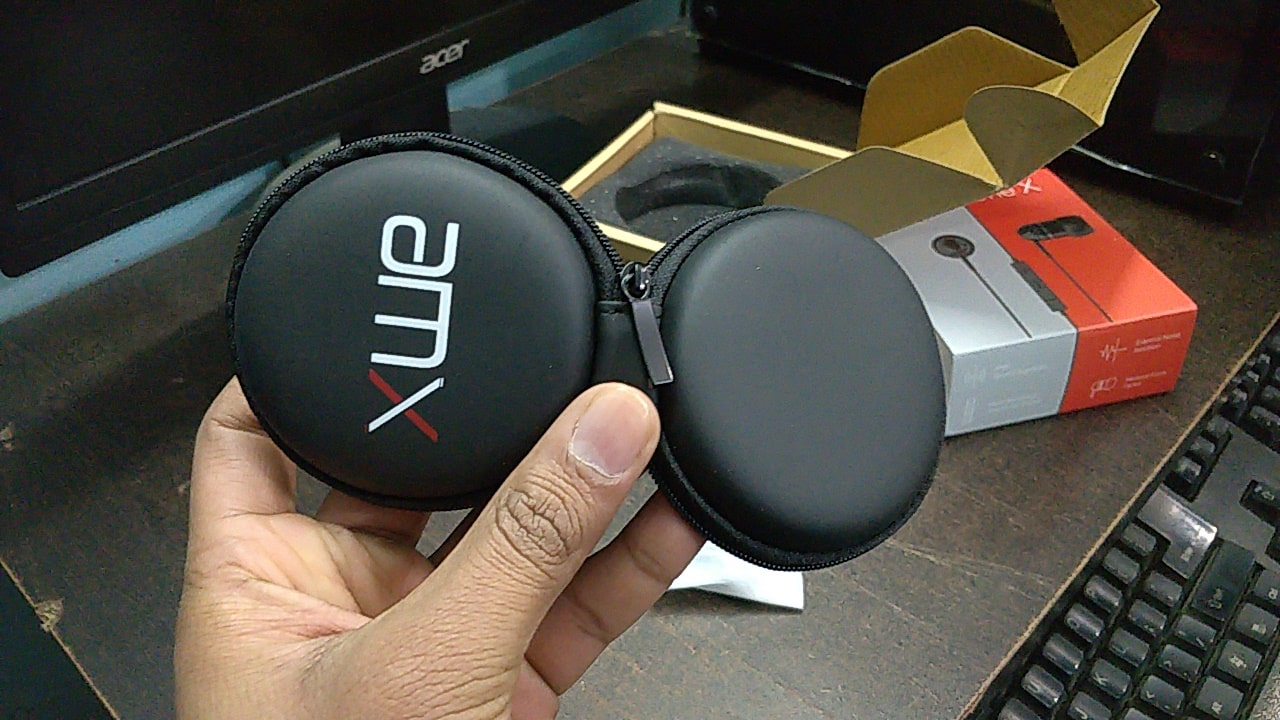 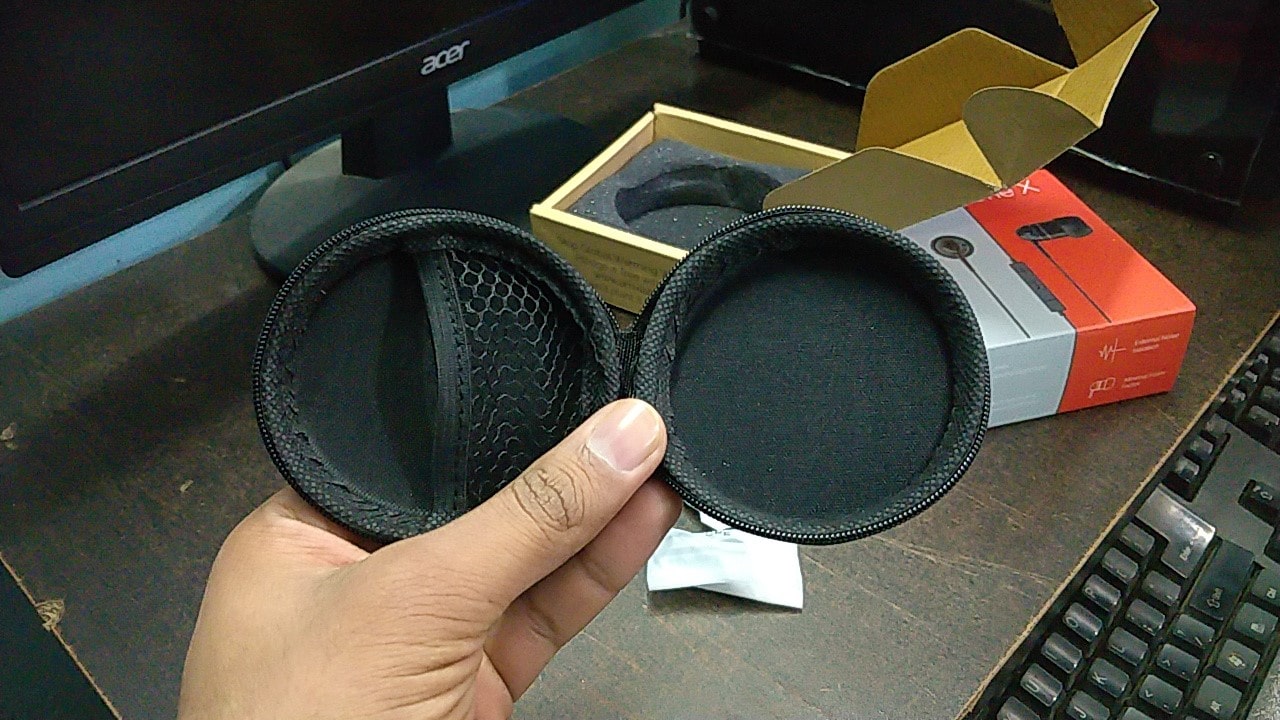 Coming to 3.5mm jack first which is gold plated and not common in 500 rupees earphones. It is three-ring earphone jack that means AMX One X supports both stereo sound as well as the microphone on almost every device. Yes, in devices like laptops and PCs where for microphone and audio different output ports are given there at a one time either a person can use it for listening purpose or audio recording. 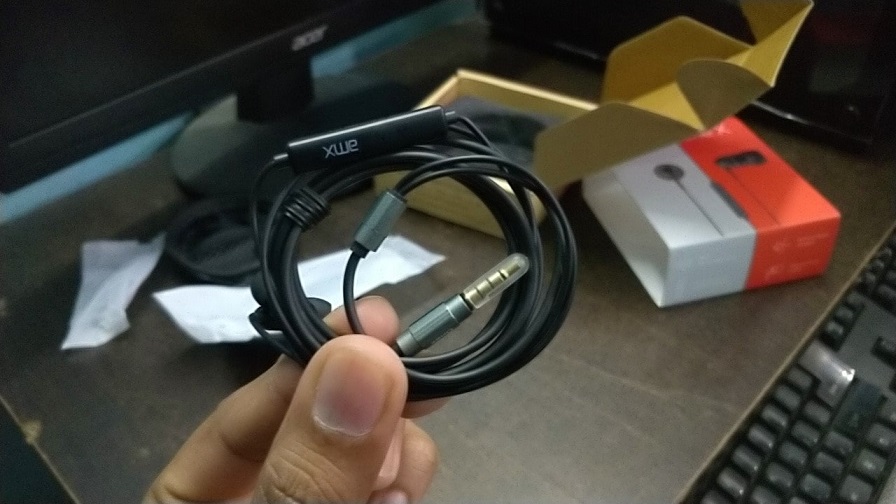 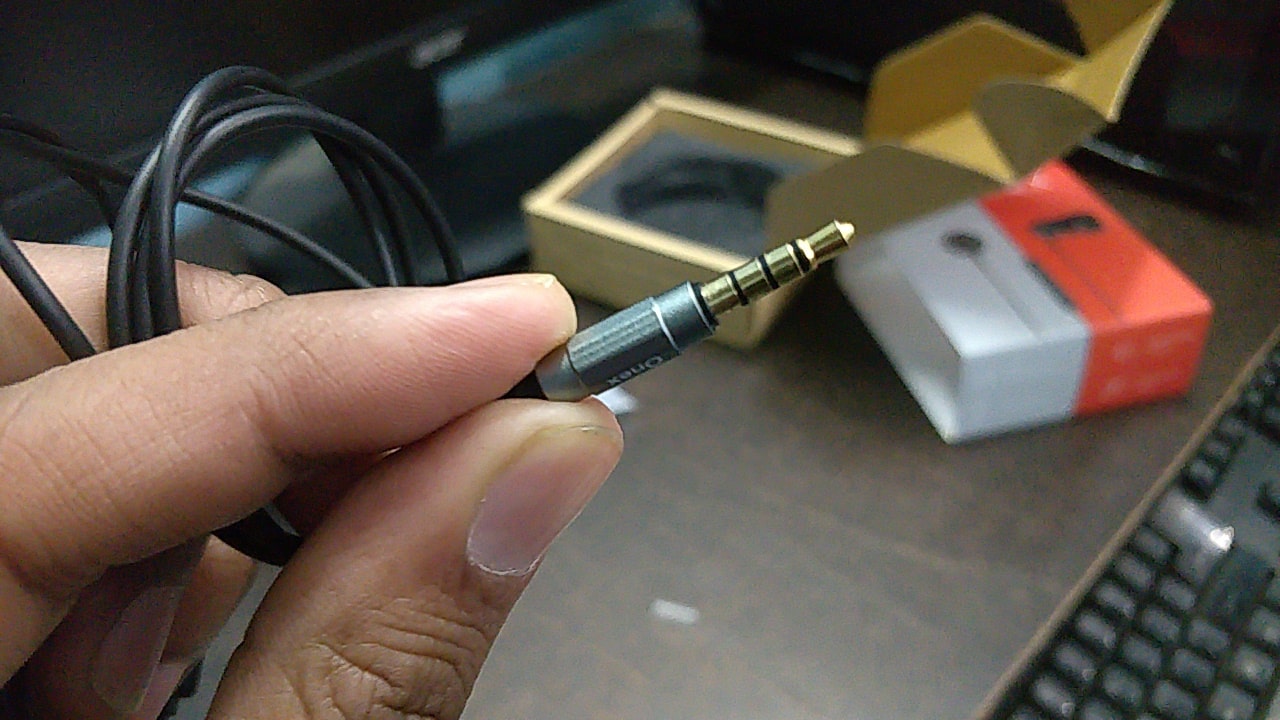 Also, don’t worry about the joints of the cable ends, they are firmly attached as they have to be, yes that is a different thing if somebody accidentally gets it pulled then not only One X even any earphones ends could break. 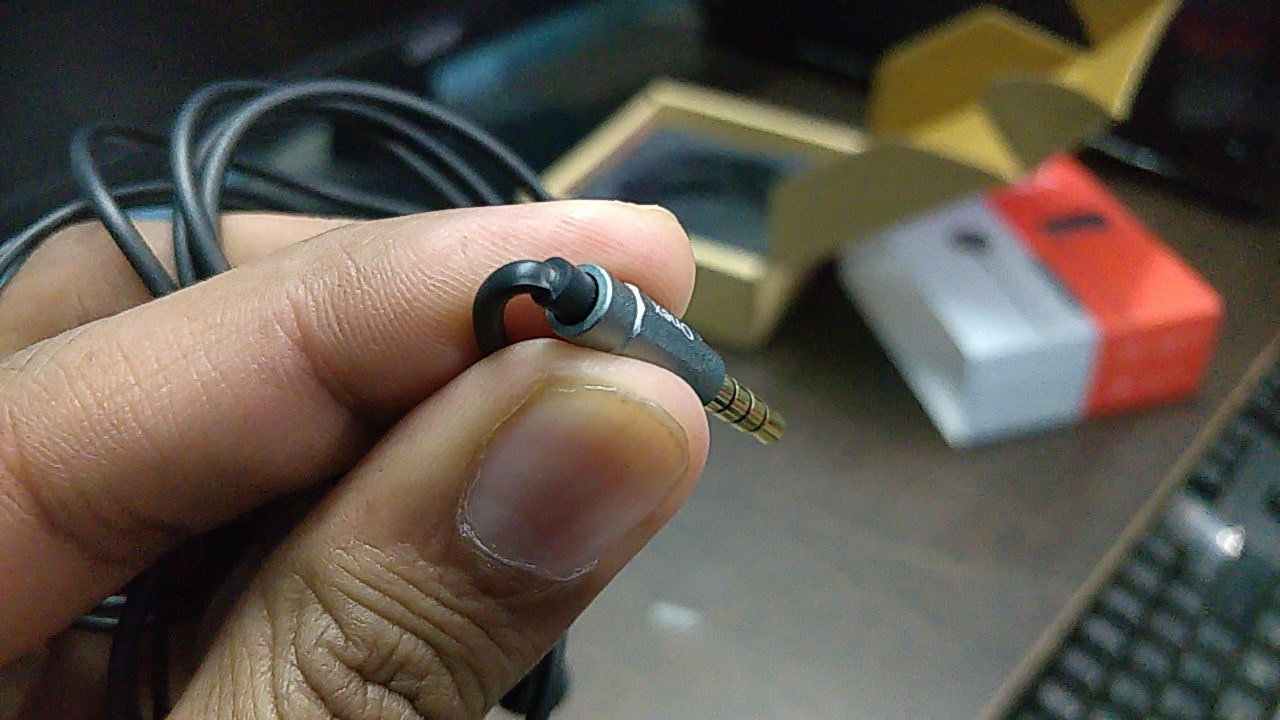 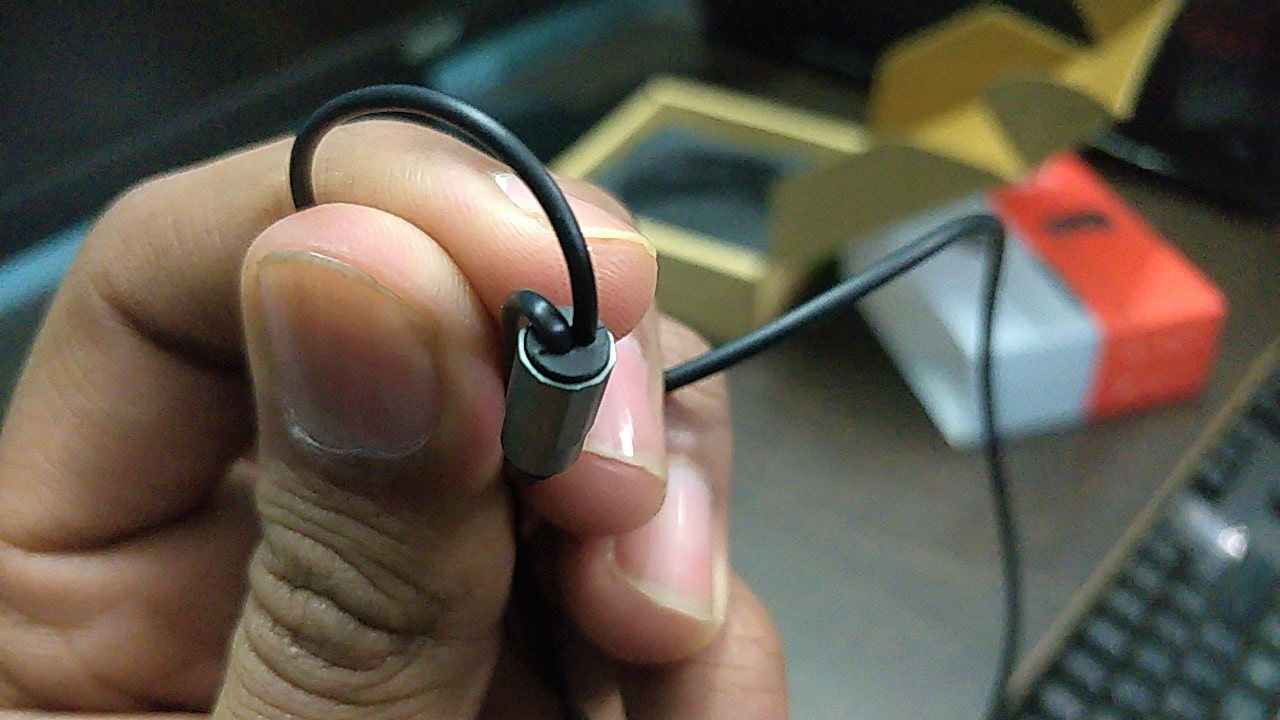 Now, let’s talk about the ergonomically designed drivers having a minimalistic shape and size which can be seen in the given screenshots. The best part the drivers are of metal with jet black colour and shiny surface. As compared to most of the earphones its drivers are quite smaller that makes it lightweight. Because of the small form factor, the earbuds appear bigger than the driver. No doubt, it will snug inside the ears completely but only with appropriate earbuds. Otherwise, it keeps popping out which makes anyone frustrate. 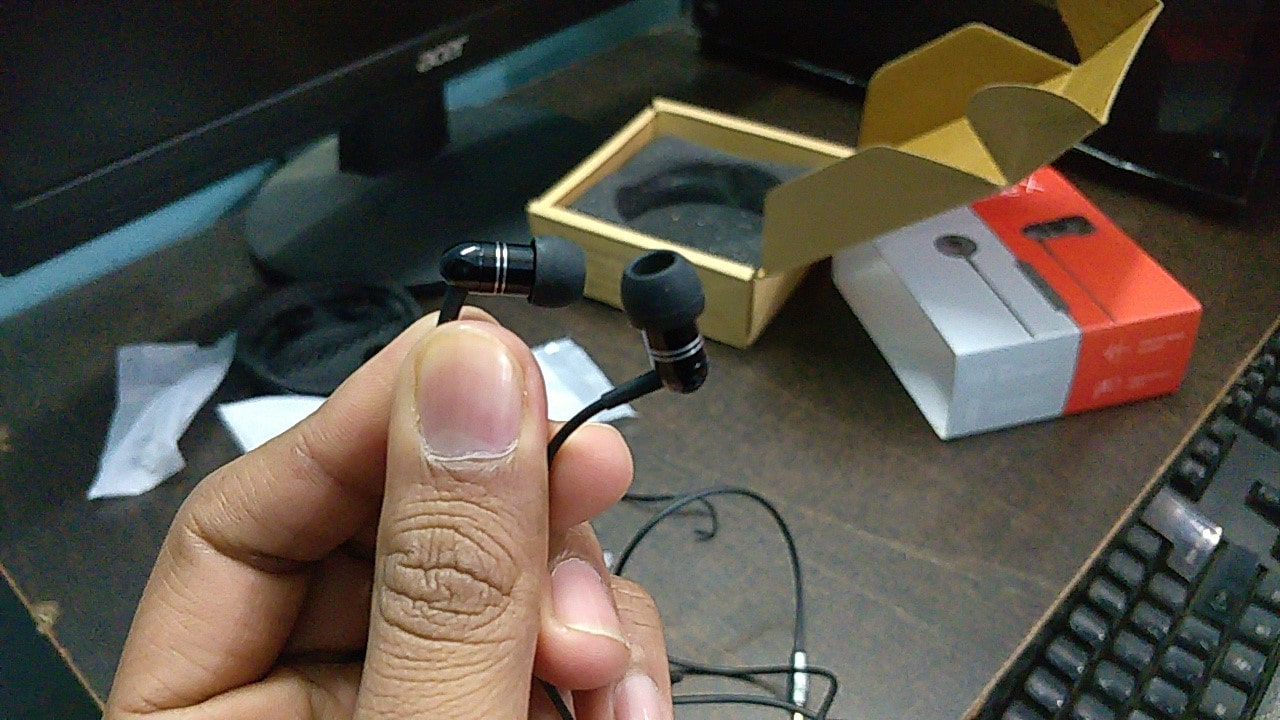 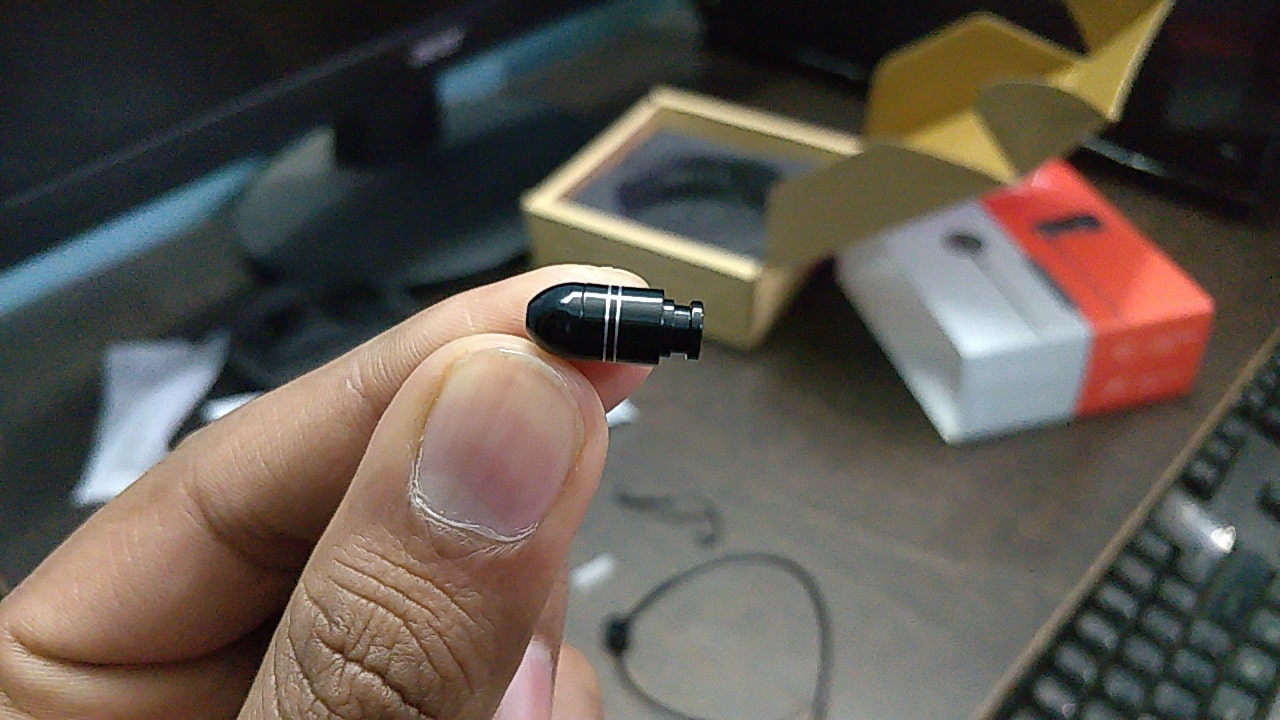 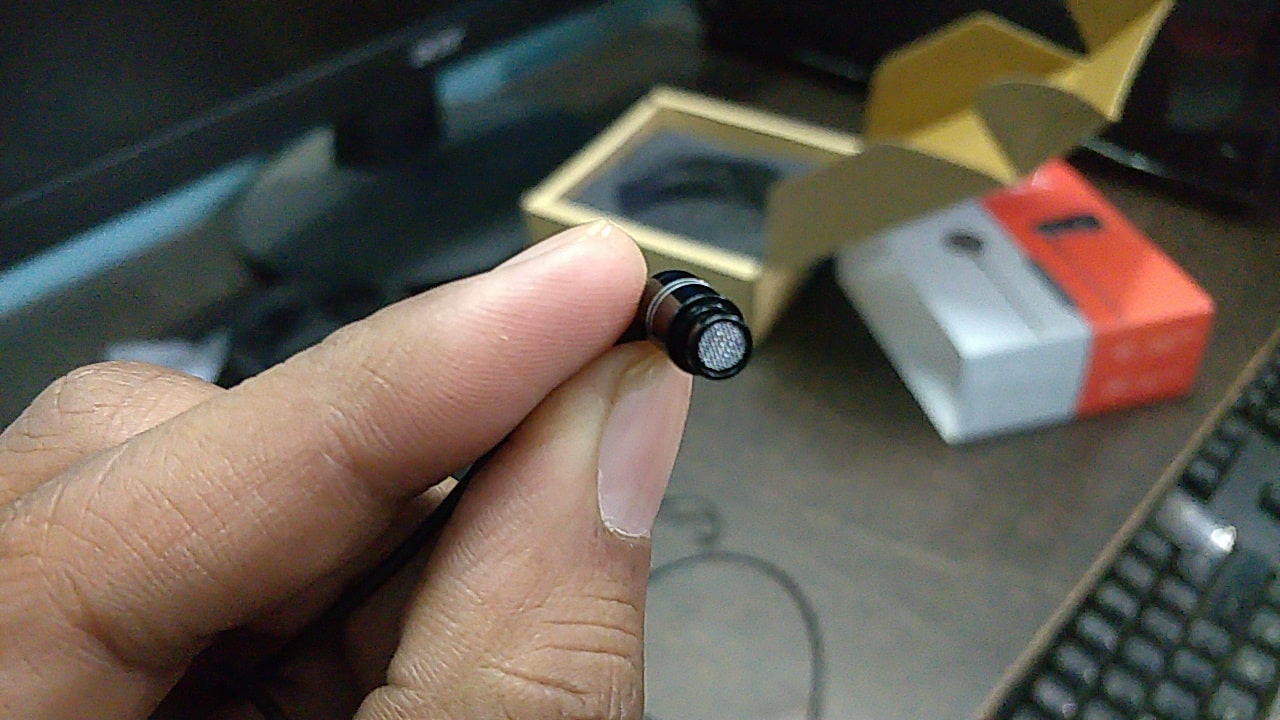 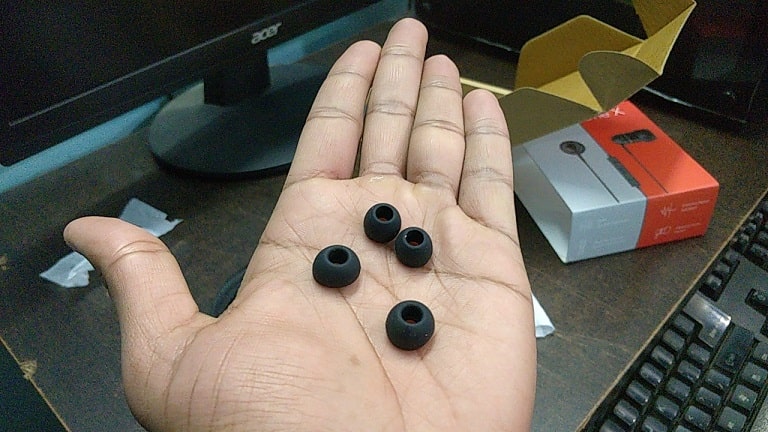 To control music, volume levels, managing calls and play or pause of music, the remote control multifunction with integrated microphone has been given on the right earphone cable. It is made of good quality plastic and we don’t have any complaint with it too because we can’t expect much more at this price point. 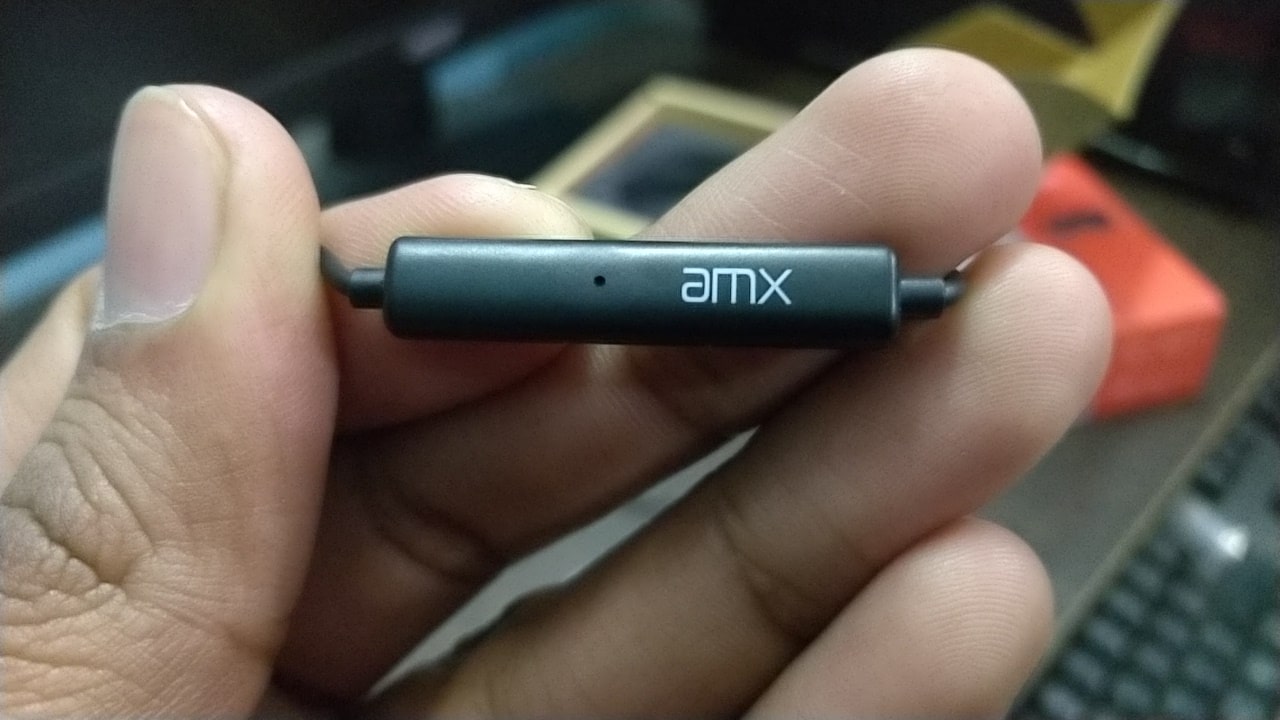 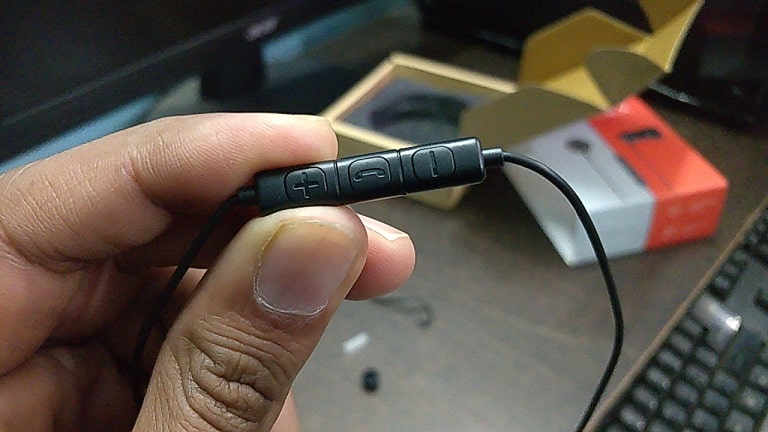 Overall, AMX One X has poise and premium design at a low budget price.

Overall performance of the AMX One X was contented expect one thing which is bass. The sound output of the earphone, the high, mid and lows each can be distinguished in songs without any struggle. The vocals produced on its 6mm driver were also immaculately clean and clear.

We listened to quite a few songs on it, from Patricia barber, Ed-Sheeran to high custom bass boost songs along with Hindi pop, old and Punjabi too. In music with only high bass with low vocals, One X performed really good but in terms of songs with amalgamation of vocals, trebles and bass, it appeared, the punch of the bass choked by other music elements. Thus, if you are fond of trance and songs with highlighted vocals the AMX One X will perform extremely well at the price it comes. However, when we talk about bass, it appears imbalanced.

Another thing which bothered me while reviewing the product was cable noise. Due to extreme snugging of the drivers inside the ears, it instinctively increases that. Whenever the cable touched or rubbed against any surface such as worn clothes, the noise can be heard clearly in the ears.

However, one thing is best that the cable of the earphone is tangle-free, means doesn’t matter how carelessly you put it in a pocket or carry pouch, you will never get an intertwined cord.

Overall, you can use it to listen to music for several hours without any discomfort.

Well, as in the beginning I said, the price of the AMX One X in-earphone is just 579.00 but the value we are getting is extremely high. Metallic drivers, gold plated 3.5mm headphone jack, three pair of earbuds, carry pouch, multifunctional control buttons all such things indeed make it a good deal however bass audiophiles could fell disgruntled but overall casual users would love it especially at the value for money it is providing by the AMX.
Here is the official website link: https://www.amxlabs.in/ 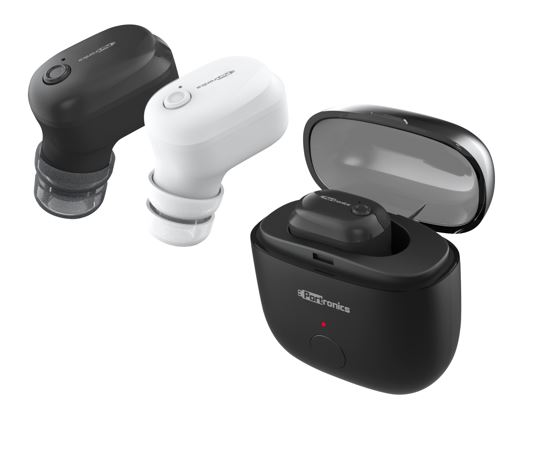 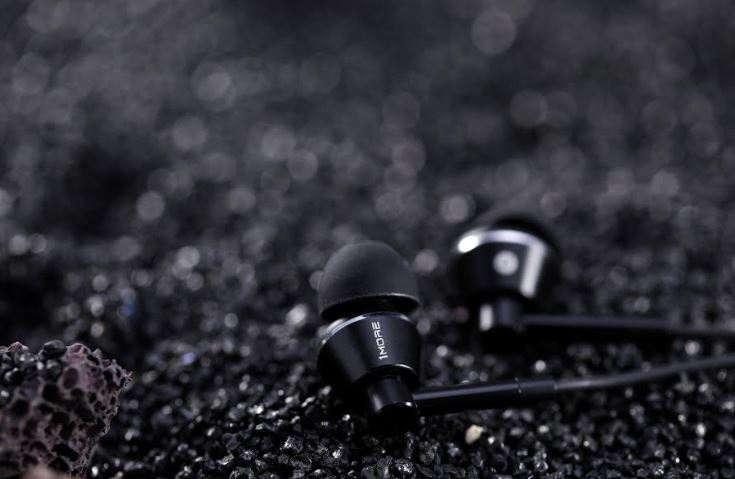 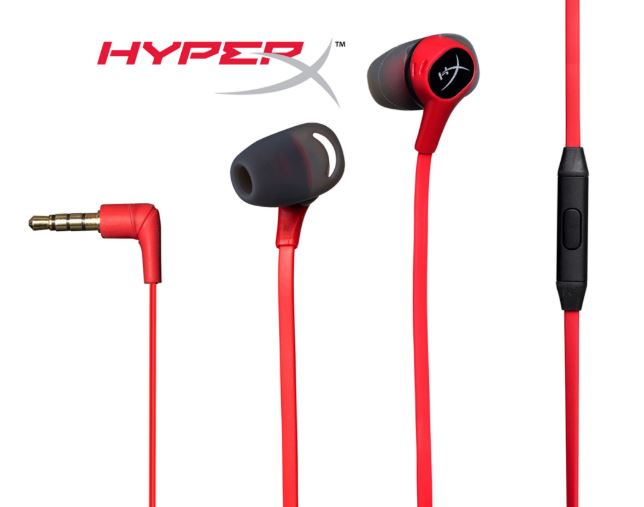