If you look at the price of Kodak 43-inch 4K UHD (43UHDX7XPRO ) that is 21,999 INR then finally Kodak is able to provide something real value to your money because of stock Android and nice picture quality.

Kodak has a long history in the imaging, however, in the Television industry it gains popularity after a Noida (India) based company named Super Plastronics Pvt. Ltd. (SPPL) became its licensee to sell various kind of Smart TVs under its brand name. Well, I can remember the first smart tv of Kodak (SPPL) launched in India was not an icing on the cake at all, however, with continuous improvements and understanding the customer needs; finally, the Kodak has come up with a fully Smart Android OS TV with lots of features that we will discuss later in this article.

Therefore, as you can see the corresponding price range to sizes is extremely low as compared to other big Smart Tv brand names such as LG and Samsung. However, what about the quality? Is there any catch which one should know? That’s all we are going to discuss in this review of Kodak 43-inch UHD 7XPRO smart Tv. 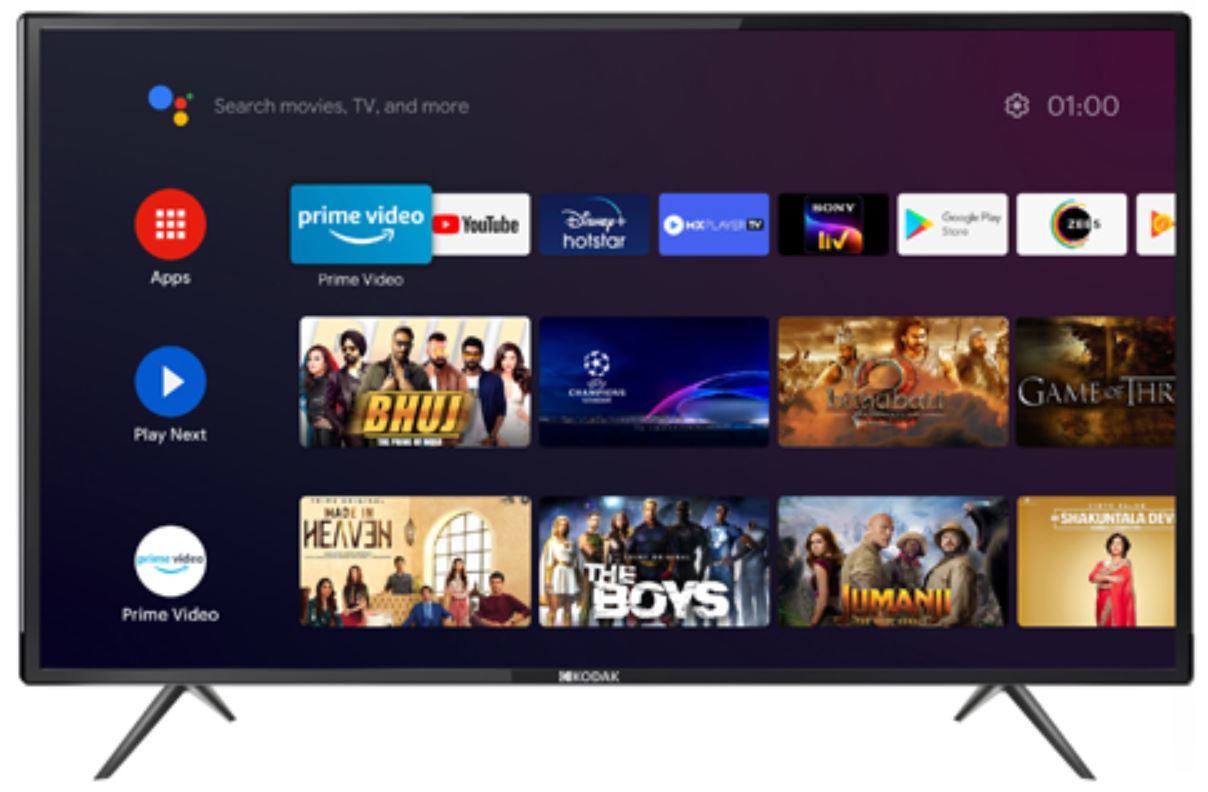 Inside the box of the 7XPRO, the user will get all the necessary items such as 1 TV unit, Remote, Wall Mount Kit, User Manual, and two pieces of AAA battery. To match 43UHDX7XPRO with the current world trend that is a narrow bezel, the company has tried to imitate that as well. However, we can’t say the TV has a completely bezel-less design but being a budget series, it is quite impressive. It is the only bottom that is slightly thicker than the rest of the three sides to hold the logo; and a small chin below it hosts the power LED and IR receiver. Along with space to concealed two bottom-firing speakers.

The TV comes with both wall-mount accessory and black plastic stands so that a consumer can use it on the wall as well as on the table. Nevertheless, there was a problem in our review unit that the stands were not compatible with the TV, may by mistake they were in the wrong box. Being a fairly slim design and not much protruding at the backside, when we hang it on the wall it becomes really difficult to access the backside ports. Therefore, to attach or detach some cable the user has to face some difficulties.

Well, talking about ports,  the vertical side got three HDMI ports – one of which supports ARC and two 2.0 USB port. Whereas the rear bottom module holds a 3.5mm earphone jack, RJ45, optical input, two A/V and TV ports. Built-in Chromecast and Wifi connectivity are available as well. 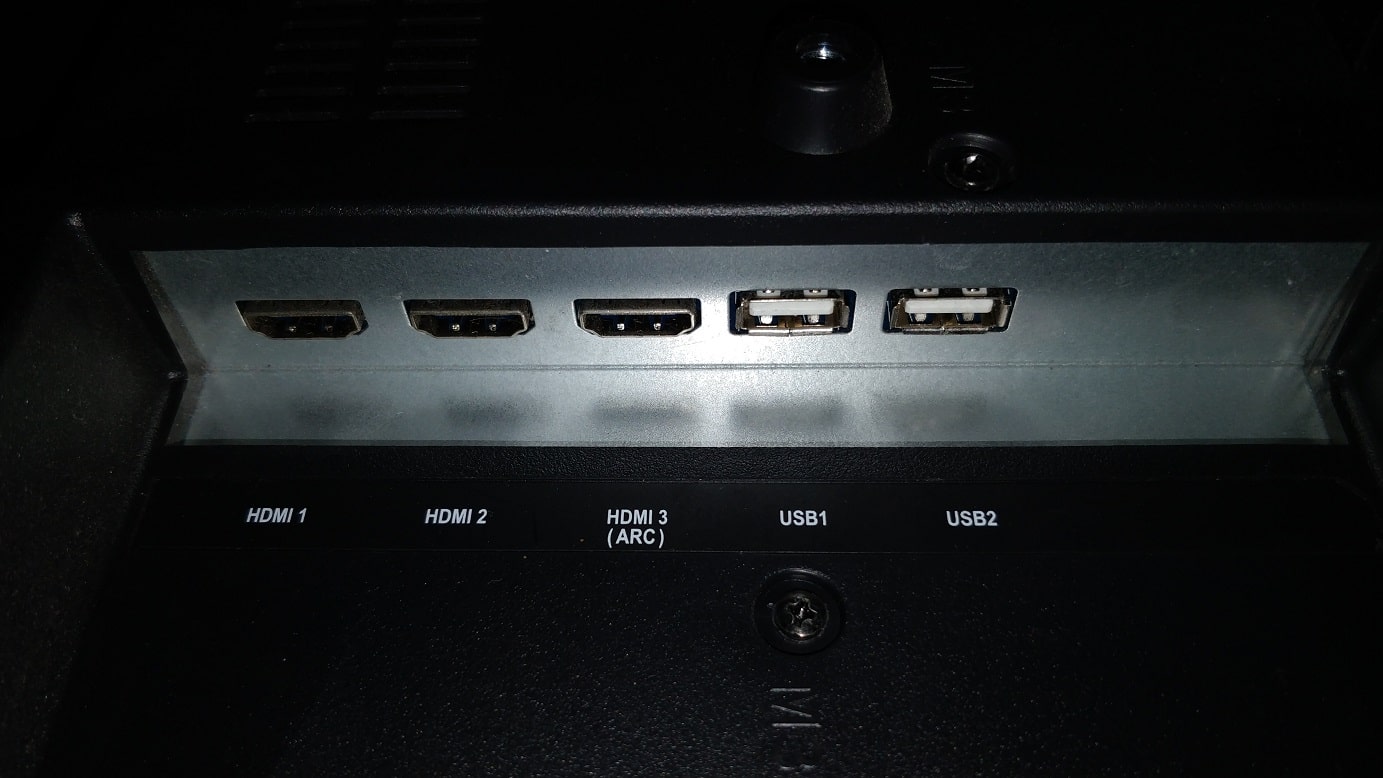 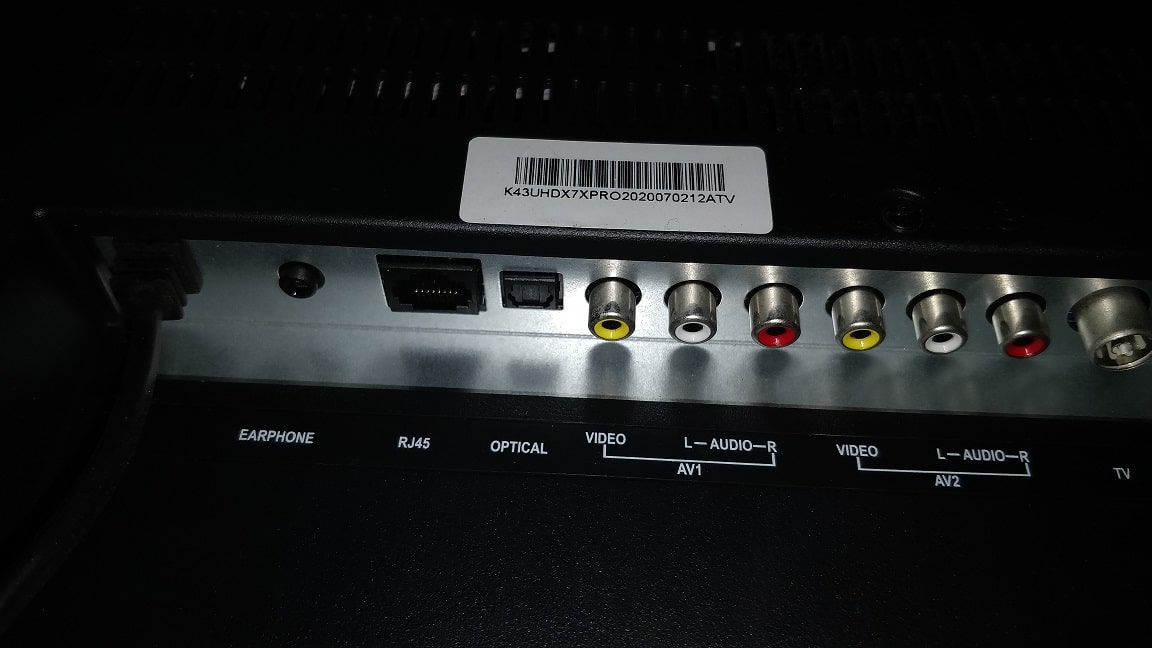 In terms of the wireless remote, Kodak has done a really good job, we don’t need to direct the Remote particularly towards the IR module direction anymore to control the TV which was a huge problem in older versions of Kodak. Another thing which significantly improved is the remote size and design. It is now much smaller and comfortable even the people with small hands can now operate it easily. It features only the key options which really a user needs such as a Volume and Channel changer, App drawer. Menu, Mute, Navigation along with shortcuts to Youtube, Amazon Prime, and Sony Live. Thus, the Remote is absolutely as it should be. 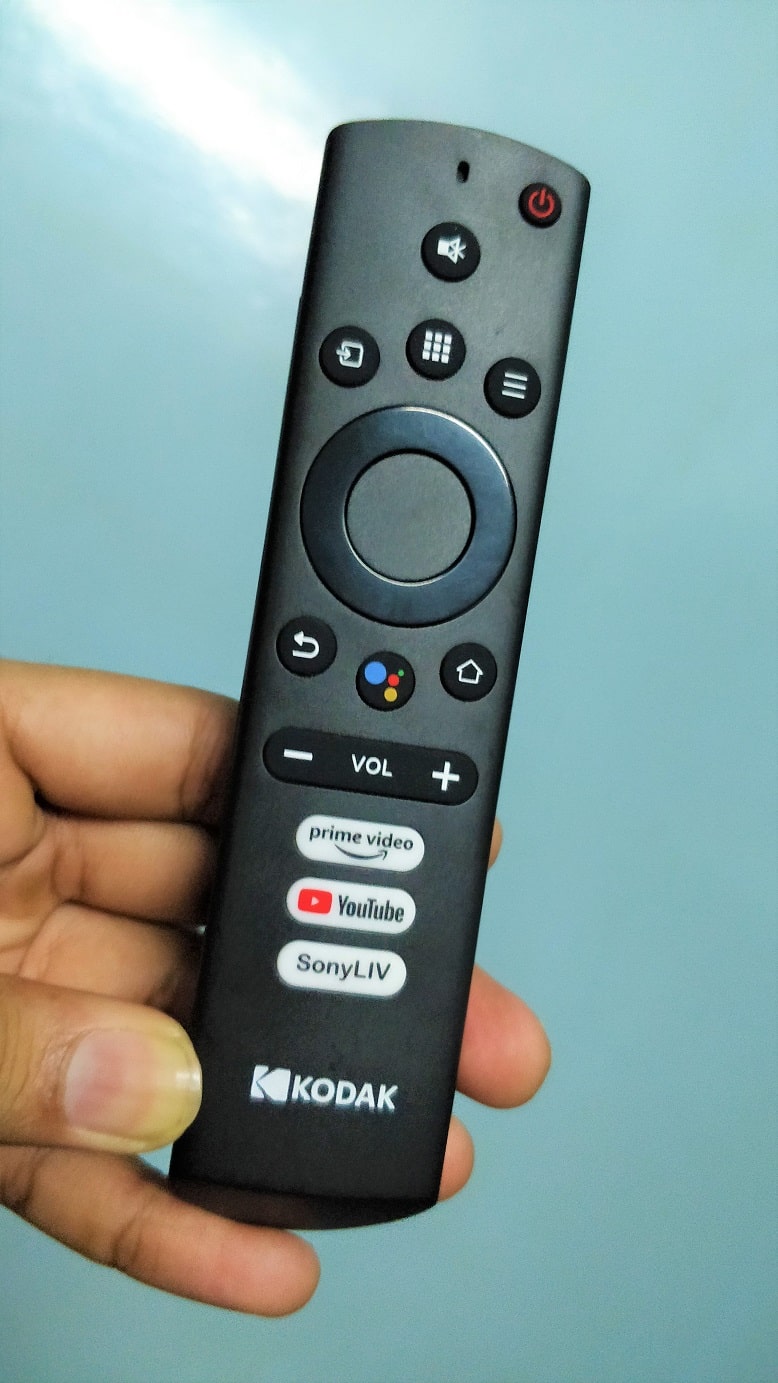 The Picture quality of our 43-inch review unit was quite impressive at 4K UHD with 3,840 X 2,160 resolution with a high brightness level of 550 nits. The support of HDR 10 and 60 Hz were another added benefit one will get in the 43UHDX7XPRO series. It ensures that users can easily play and enjoy games over it.

7XPRO IPS LED Panel with good 178 degrees viewing angle, contrast, and vibrant color production of the Display engine were standard and value for money, if we look at the price of the TV. While testing, we used various videos including 4K in which we found no light bleeding and darker areas were also visible clearly. Yes, being an IPS LED Panel, the white shadow can be seen on the dark sides of a scene. Moreover, out of the box, the colors set to rich, thus wouldn’t need to adjust until you need some specific outcome.

Well, when it comes to DTH and as there is no upscaling technology then regular SD resolution generally available in all Indian houses will not look good at all. Because of the display size, obviously low res. channels would not appear good and pixelation will be there. Hence, if your planning to have 4K TV then it is recommended to go for HD channels.

Overall, the 4K HDR content on YouTube or via USB disk brings life on the Kodak screen. We didn’t find any jerks or noise while playing 4K videos.

Coming to its interface which is not attractive but simple to use and understand. 7XPRO runs on stock Android 9.0 thus without any customization, it adds responsiveness and provides easy to operate UI. All the Apps can be accessed with just one click of remote, frequently used apps will automatically start displaying on the TV UI to quickly access them. Furthermore, the incorporation of the Google Play store out of the box gives us access to thousands of apps available on it for installation. Apart from Play Store; Youtube, Amazon Prime, Google Play Music & Movie are a few other apps that come as pre-installed. The weird thing is, the SonlyLive shortcut is there on the Remote control but the app for the same has not been installed on our review unit, thus we need to do that manually from the Play store.

The biggest problem with the Kodak UI is the lack of various options that should be there, while during my usage, I couldn’t find the settings to customize Contrast, sharpness, etc. manually. Even for selecting the predefined picture and sound adjustments, we have to go on the Live TV or HDMI input source and then need to press the Menu button. I couldn’t comprehend why the customization options were not there and even the pre-define ones are hidden so deep that a normal user would get perplexed in actually to get them. 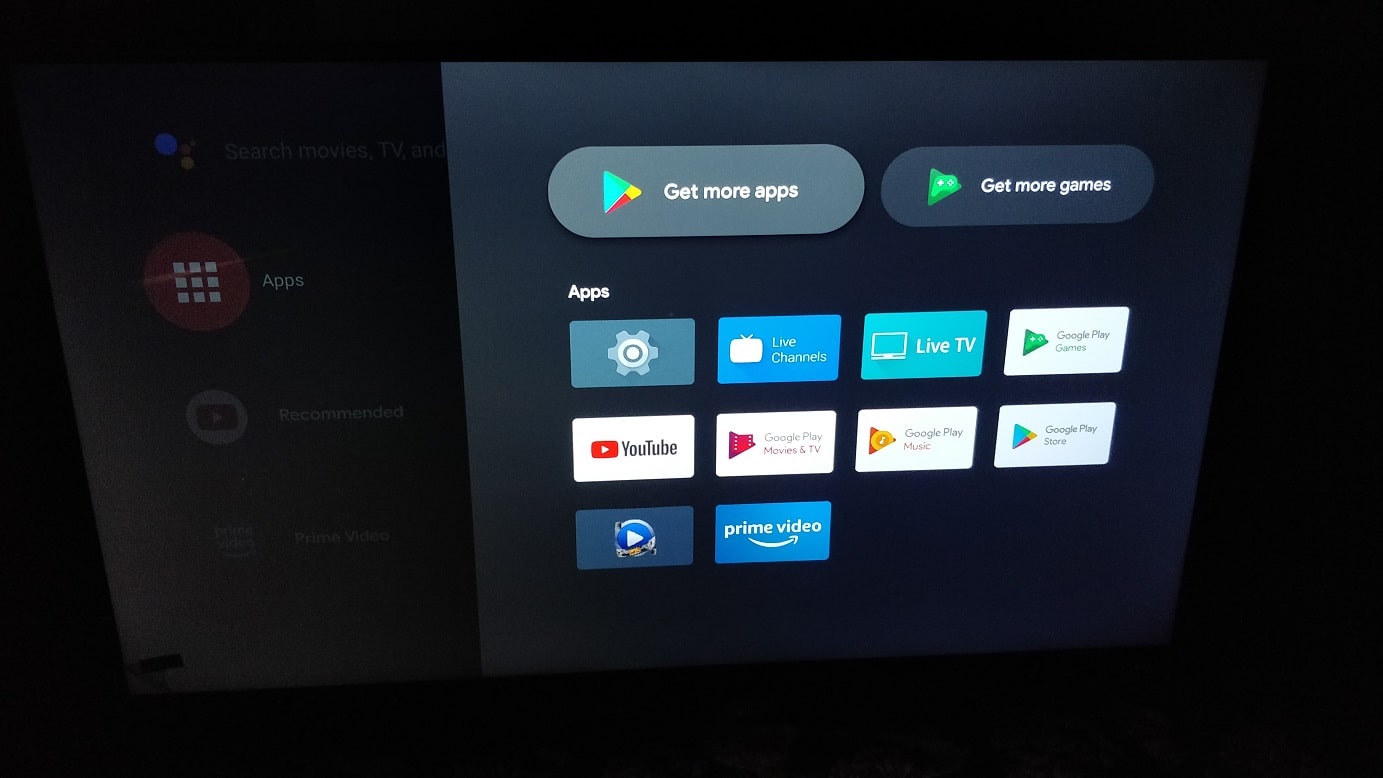 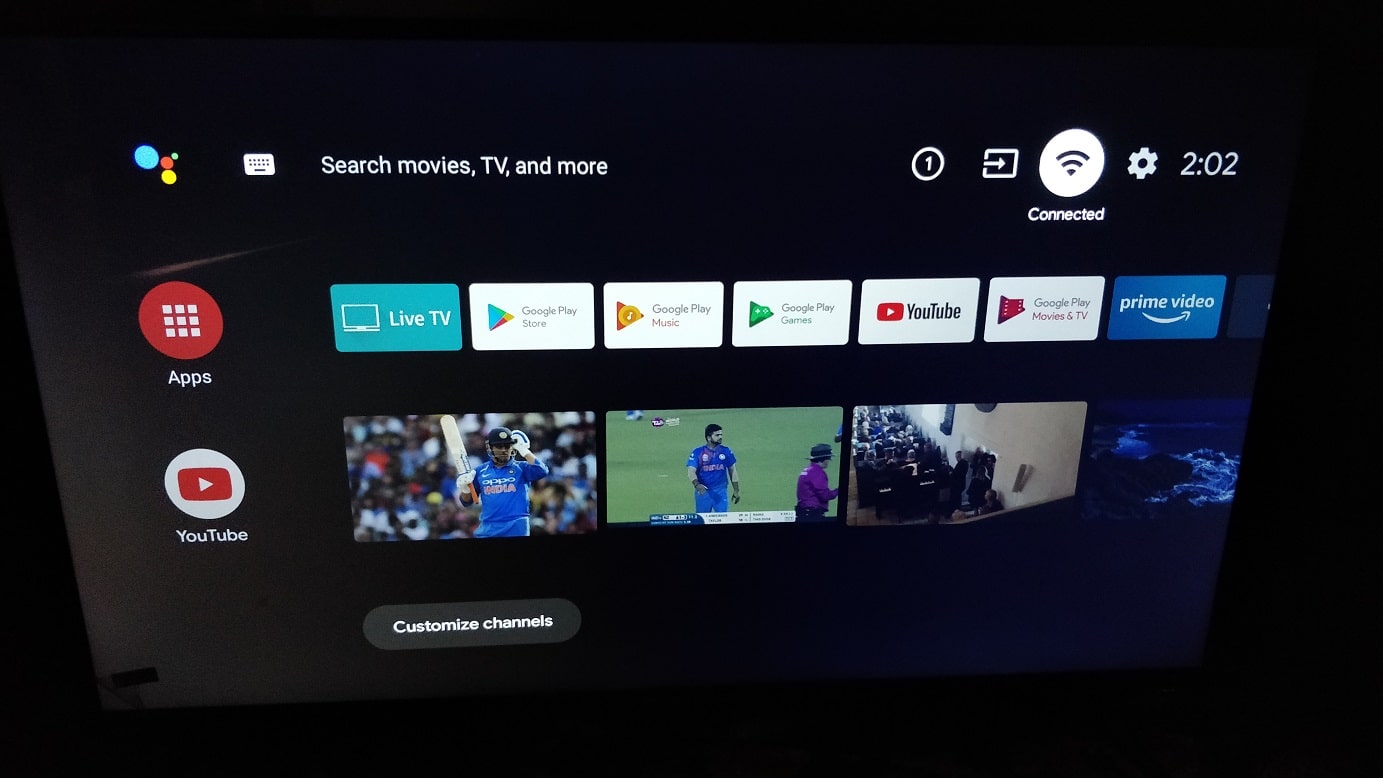 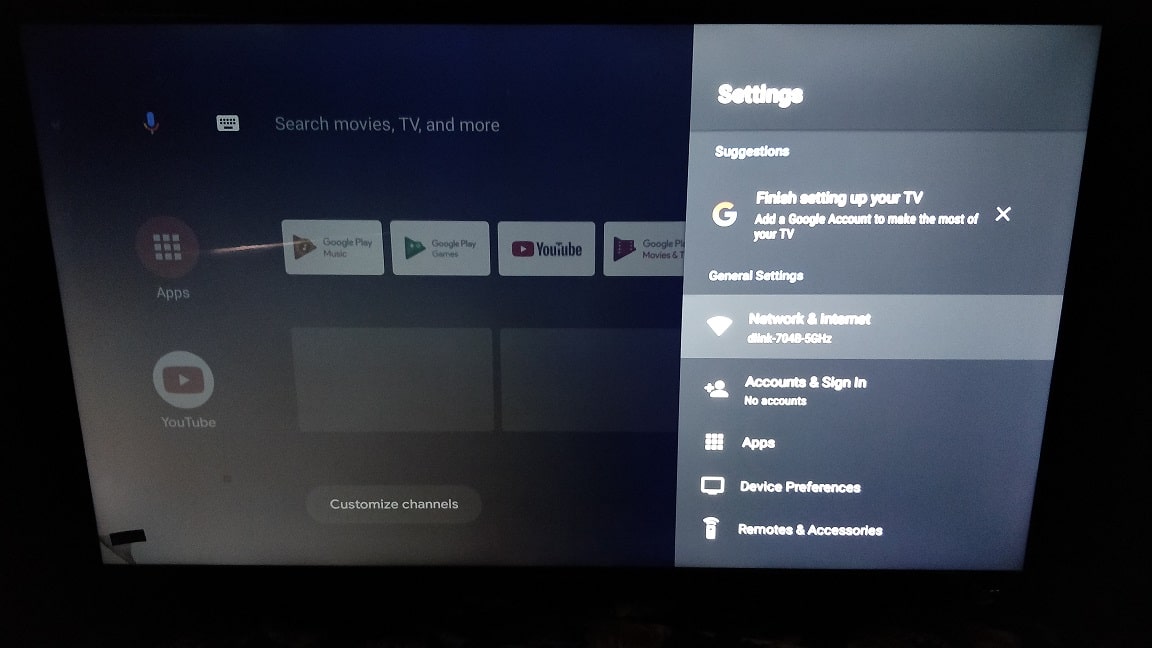 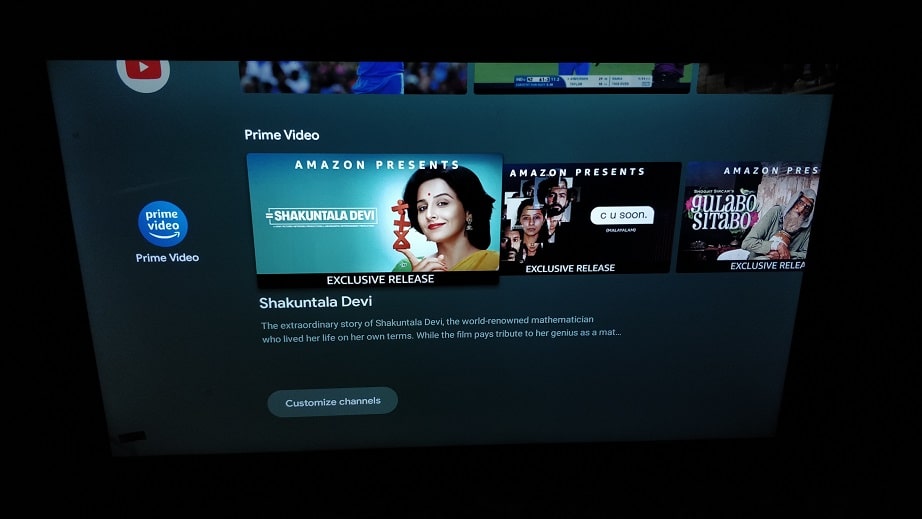 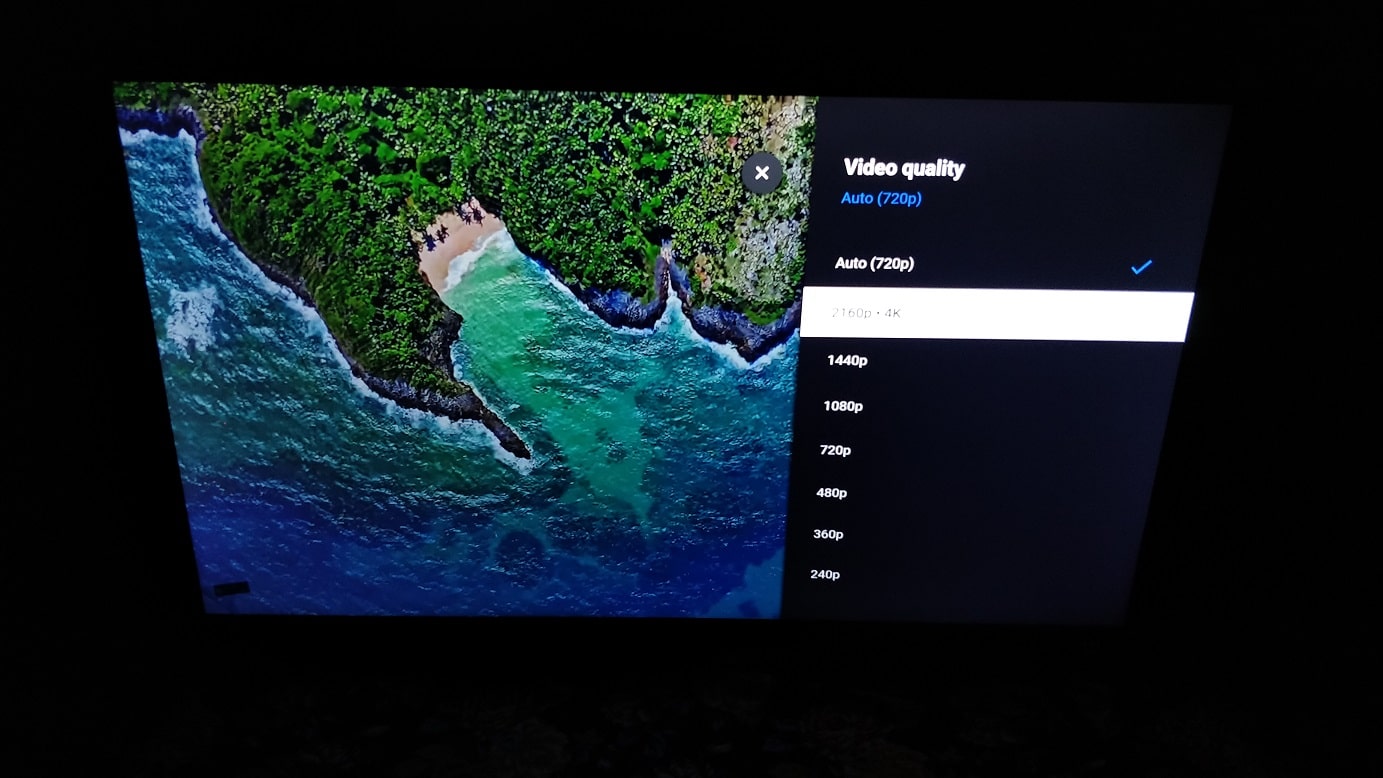 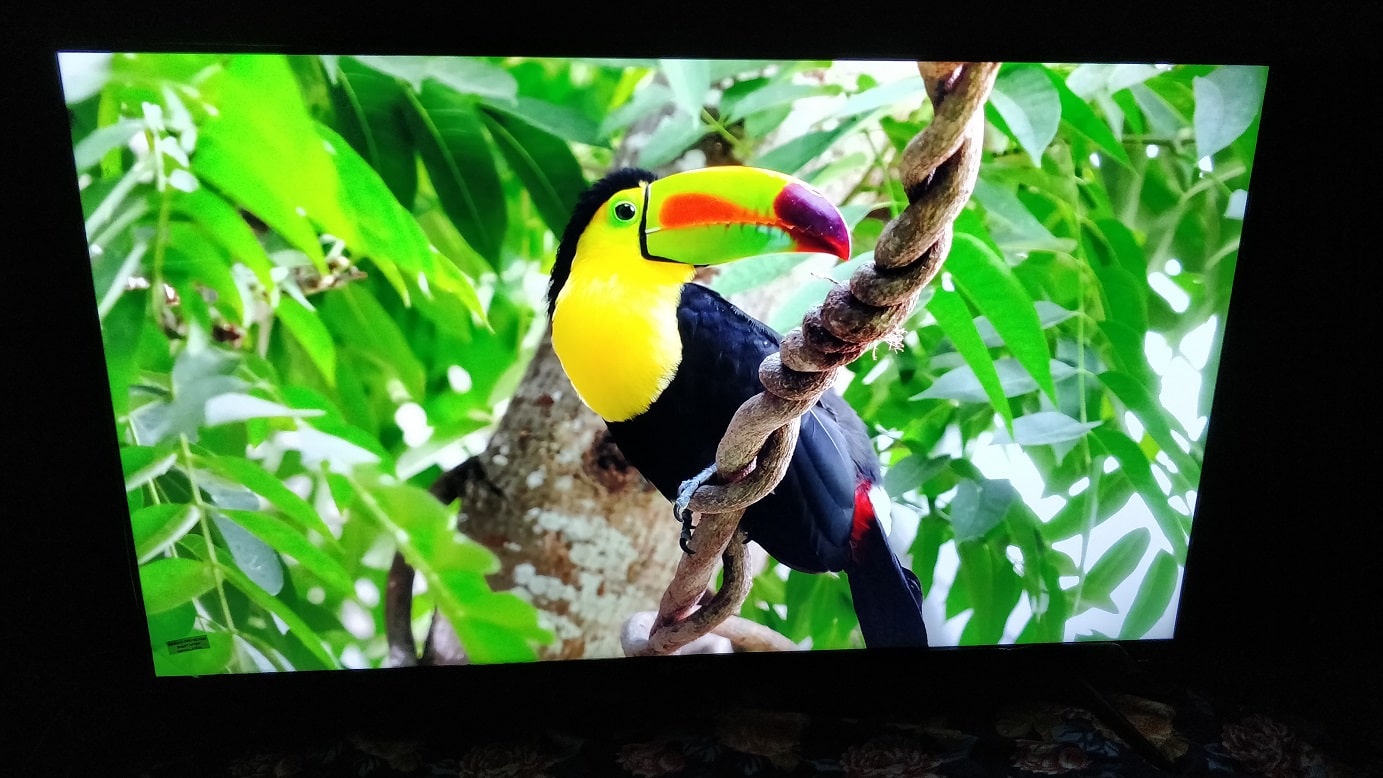 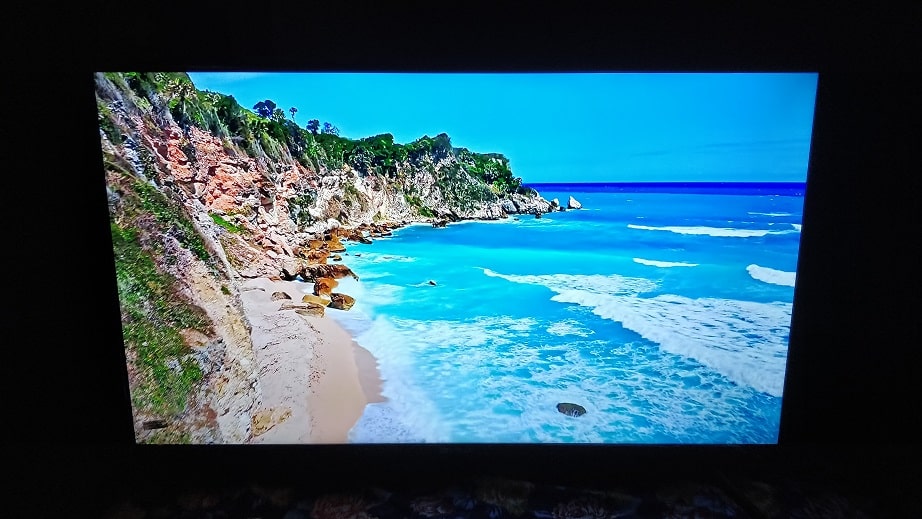 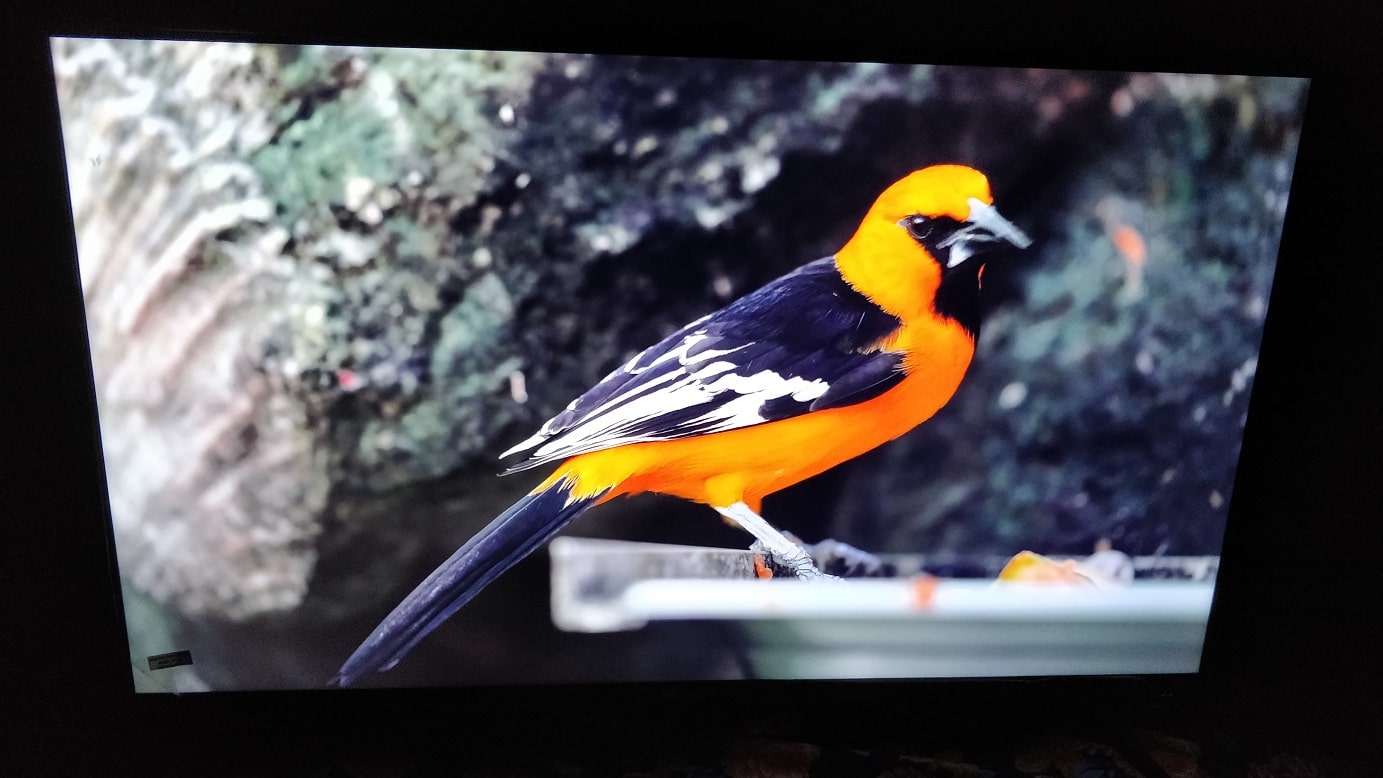 The Kodak 43UHDX7XPRO Smart Tv running on Quad-Core ARM Cortex A53 and for Graphics it has Mali-450. For multitasking, 2 GB RAM and 8 GB Storage out of which around 4 GB are available for usage.  The hardware is pretty decent to get the smooth performance and the same is true with the 7XPRO while our testing. Also, as compared to the previous generation of the Kodak, this one doesn’t take long startup time or delay in the opening of apps or while navigating through its interface. Thus results, fluid performance without lags. For media, it supports MP4, MPEG, MPG, MKV, AVI, FLV, ASF video and MP3, MPEG1, MPEG2, MPEG2.5, AAC, HE-AAC, ASF, WMA sound formats.

In terms of hardware, the problem I faced was with the Audio. Kodak 43UHDX7XPRO packed with two 24W speakers, no doubt with loud sound but when it comes clarity it was not there at all. Even at a low volume, it keeps sound very loud and automatically getting high and low in terms of pitch, thus, ruined all the experience of watching movies and shows. Sometimes it was too difficult to understand what actually is happening in the content we were watching on it. I thought it could be with only the TV’s inbuilt speaker, therefore I tried the external one using its 3.5 mm audio jack but out of luck the same problem was there too.

Verdict: Should buy it or not

If you look at the price of a 43-inch 4K UHD that is 21,999 INR then finally Kodak is able to provide some real value to your money because of stock Android and nice picture quality. However, Kodak is still lacking major R&D and aggressively testing part in their TV products before actually presenting them in front of the consumers. The Audio performance in our case and other intermittent problems that occur from time to time with the Kodak Smart TV users are proof of that. Therefore, if you want a budget Smart TV, big size, nice picture quality, and true Android experience but ready face somewhat unwelcomed problems then go for it. Otherwise, increase your budget until you won’t be able to buy some other high-end good options available in the market.