The DSL stands for Digital subscriber line which uses to provide a broadband Internet connection and there are muliple types of DSL.

It is a combination of transmission technologies in which our normal telephone lines are used as a transmission medium. These telephone cables are ordinary copper cables but with the help of DSL technology, they allow users to transmit the data at very high speed using the modems (analog and digital).

The DSL technologies use two type of data transmission modes one is Symmetric and other one Asymmetric. As mentioned above that the DSL uses the public telephone line which already pervasive in each every home almost, it becomes easy for the telecom or broadband Internet providers to facilitate the access of high-speed data connection. It also reduced the extra burden of spreading separate line exclusively for data connection. That is why the DSL connection is popular among users in various fields especially in small offices and enterprises and has been widely used in some countries and regions.

You may often read a terma XDSL. Now, What is the XDSL modem? 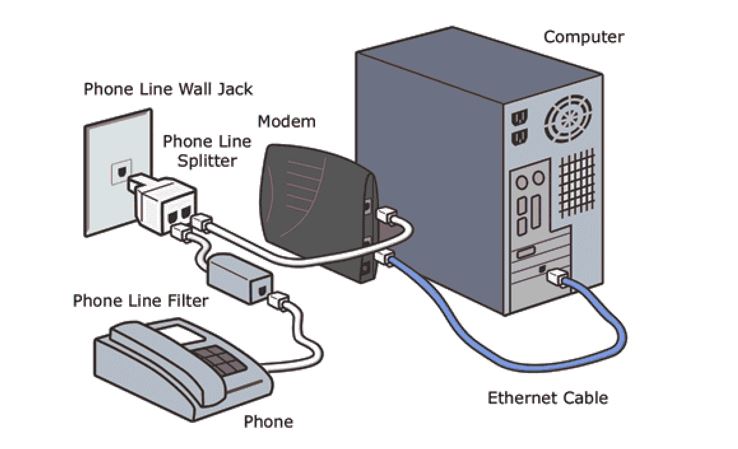 What are the different types of DSL?

Symmetric digital subscriber line (SDSL) developed to overcome from the limitations of the traditions T1/E1 access technology. As compared to this old traditional transmission technology the DSL is easy to install and in error rectification. Multiplexing is supported to avail Voice, video and data multiplex services. HDSL, SDSL, IDSL  technology are some main form of Symmetric DSL. In the SDSL the upstream ( subscriber to the network) and downstream (network to the subscriber) bandwidth direction is identical to each other and can be considered as the counterpart of the Asymmetric digital subscriber line (ADSL) but slight variations about which we talk later in this article.

HDSL stands for High Bit Rate Data subscriber line. This DSL technology falls under the Symmetric data transmission mode; this protocol of transmission was approved in 1994 and was the first DSL technology. It uses two pairs of twisted pair cable of copper to transmit the data at various rates of N × 64 kbps, up to E1 rate. Within 3.6 Km, the HDSL can transmit the data normally without the need of amplifiers. HDSL2 and HDSL4, proprietary SDSL, and G.SHDSL are its some improved versions.

It is Single Line DSL is a version of HDSL uses a single wire and provide bidirectional high-speed variable bit rate data transfer also known as SHDSL. It uses the single pair of twisted cables to deliver a payload from 192 kbit/s to 2,312 kbit/s in 8 kbit/s increments and 384 kbit/s to 4,624 kbit/s in 16 kbit/s increments for two pairs of wires.

It supports multiple connection rates up to E1 rate and a maximum transmission range up to 3 kilometers on a 0.4mm twisted pair. As compared with HDSL its deployment is easier as it can save a pair of twisted pairs.

IDSL (ISDN Digital Subscriber Line) IDSL technology can provide 144KB/s on the same copper line an ISDN terminal adapter where the dual channel ISDN connection can only work at 128KB/s which is slightly better.  The biggest difference between IDSL  and ISDN is that the data exchange of IDSL does not pass through the switch and it features an ‘always on’ connection. The transmission distance is 18,000 feet and can be extended further using amps.

ADSL (Asymmetric DSL) also uses a twisted pair of copper telephone lines with a capacity of downlink speed of up to 8Mbps and uplink speed of 1Mbps. It can transmit up to 3 to 5 kilometers. Generally, in our homes, you will see the ADSL which only need to install ADSL equipment at both ends of the line to provide users with high-speed broadband services without rewiring.

RADSL (Rate Adaptive DSL) is an ADSL version that adjusts speed based on signal quality. Many ADSL technologies are actually RADSL.

RADSL (Rate-AdaptiveDSL) is a new generation access technology developed on the basis of ADSL. This technology allows service providers to adjust the bandwidth of xDSL connections to meet actual needs and solve line length and quality problems. Provide reliable data network access means for remote users. It features: a pair of twisted pair transmission; supports synchronous and asynchronous transmission; rate adaptation, downlink rate from 1.5Mbps to 8Mbps, uplink rate from 16Kbps to 640Kbps; supports simultaneous data transmission and voice, especially suitable for It is rainy and the temperature is extremely high in an abnormal weather environment.

It has the characteristics of supporting bidirectional rate symmetry and high transmission rate, but the transmission distance is short. Take full consideration of its technical features when deploying VDSL. For residential buildings with relatively dense, medium distance (within 1 to 1.5 km) and high bandwidth requirements, users can consider adopting VDSL mode instead of LAN access technology to avoid large investment in integrated wiring; for hotels, commercial buildings, etc. It is also impossible to carry out special wiring areas where the cost of integrated wiring or integrated wiring is too high, and areas that are occupied by competitors through integrated wiring. VDSL technology can also be considered to quickly seize the user market. In short, the introduction of VDSL technology should focus on those areas with high-speed requirements, good line quality and short line distance, so that the advantages of VDSL can be fully utilized. Of course, the combination of optical access technology to push VDSL to users who are far away is also a key issue to be considered. At present, it has already met the conditions for network testing.

The G.Lite standard is a low-speed ADSL standard (also known as the G.992.2 standard) adopted by the ITU (International Telecommunication Union) on June 22, 1999.

The reason why this standard is different from the standard full-speed ADSL is to eliminate the user-side splitter (a filter that separates the frequency band used by the original phone ) by sacrificing a certain transmission speed, so that the user can install the ordinary modem, thus eliminating the workload of the service provider’s field service, thus accelerating the promotion of ADSL.

It provides 1.5Mbps speed over a regular telephone line. It is three times faster than the ISDN connection by providing lowest downlink speedo 384Kbps which also faster than the typical phone service using a V.90 modem.  Upload speed or upstream is 128Kbps. The maximum downlink rate of the G.Lite standard is 1.5 Mbit/s, and the maximum uplink rate is 512 Kbit/s.

To know more about DSL and its history refer to Wikipedia.

How to install IIS on Windows 10 using Powershell

How to remove Outliers from a Dataset using Python?

What is Skewness and Kurtosis in Data Science??