In the first quarter of 2018, the global smartphone market experienced a cold wave, and the Chinese market was not spared. From the data provided by a number of research institutions, the decline in shipments, the slowdown in market demand is present in front of all mobile phone companies. 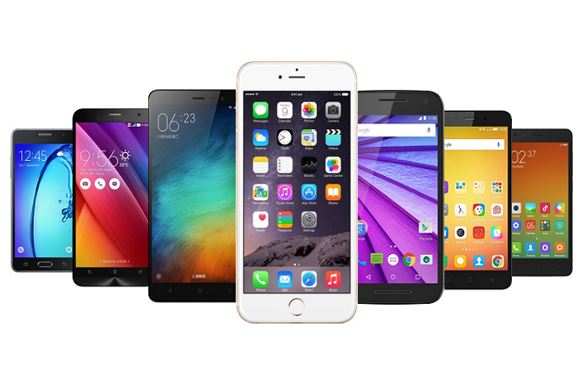 In the Asian market, China’s smartphones have exhibited a unique phenomenon of “decreasing prices and increasing prices” in Q1.  According to GfK China’s retail monitoring data, Q1 China smartphone retail sales fell 6% to 105 million units. However, it is worth noting that the overall retail sales in the Chinese market have increased by 15% year-on-year to reach US$40.1 billion.

According to the “China Mobile Phone Market Operation Analysis Report for March 2018” released by the China Information and Communication Research Institute under the Ministry of Industry and Information Technology, Q1 Chinese mobile phone shipments were 81.37 million units, down 26.1% year-on-year; and the annual data of the market research organization Canalis was displayed. China’s smartphone shipments for the first time in 2017 ushered in an overall decline, shipments of 459 million units, down 4% year-on-year, of which the fourth quarter shipments fell by as much as 14% year-on-year.

Regardless of retail sales or shipments surveys, the market downturn has continued to increase. However, it is worth noting that GfK’s “decrease in price” phenomenon shows that Chinese brands and international brands have achieved results in improving the allocation of mobile phones (more focused on high-end models) from the end of last year to the beginning of this year. The online channels are more favored by consumers, and mobile phone sales have seen strong growth. On the other hand, operators’ channels have seen a certain decline in mobile phone sales, but fortunately, they have been compensated by the increase in online channels.

According to the GfK-related forecast: China’s smartphone retail sales will decline by 4% in 2018, and the market will become saturated.

In addition, in the aspect of technological innovations in the high-end and high-end models and the improvement of user experience, the competition for head brands such as Huawei, OV and Xiaomi will also become more intense.

The Asian market has suffered a full setback, but these two countries have become bright spots.

Analyzed from all aspects of data, the future situation of the Asian smartphone market in China is not optimistic.

In the first quarter of 2018, the volume of smartphones in developed Asian markets fell by 3% year-on-year to 17.6 million units. Among them, the highlight of the Australian market is the frequency of increase, which has reached 22%, but the overall trend is not optimistic due to the decline in retail sales in the Korean market by -16%. GfK predicts that due to the influence of the Korean market, the volume of smartphones in developed markets in Asia will drop by 4% in 2018 (the GfK report includes Australia, New Zealand, etc. into Asian developed markets).

In Asia, emerging markets such as India, Indonesia, Malaysia, Myanmar, the Philippines, Thailand, and Vietnam, the retail volume of smartphones was flat at 58.7 million units in the same period of 2017, and retail sales rose 14% to US$11 billion due to the increase in average prices.

What surprised people to understand the notes was that India had become the market with the largest drop. According to the GfK report, the retail volume of Q1 smartphones in India dropped by 4%, mainly due to the influx of low-end 4G feature phones, which hinders the popularization of smartphones.

This trend is in sharp contrast to the growth that has occurred in 2017. Understanding the statistics of the notes found that the Indian smartphone market accounted for about 10% of the global market share last year, a growth rate of up to 14%, and mobile phone production reached 124 million.

In Counterpoint Research’s survey data, it can be seen that there were 70 million Indians using smartphones for the first time in 2017, and India’s smartphone users also jumped to 370 million in the same year. For the downturn in the Indian market, Q1 will be a most worrying factor to the Chinese mobile phone companies.

Last year, China’s mobile phone brands accounted for 54% of the market share in the Indian market, an increase of 34% compared to 2016. Currently, among the top five mobile phone brands in India, Chinese brands occupy four seats. The data in the chart below shows that Samsung ranked first in the smartphone market share in India in 2017, followed by four seats for Xiaomi, Vivo, Lenovo, and OPPO. 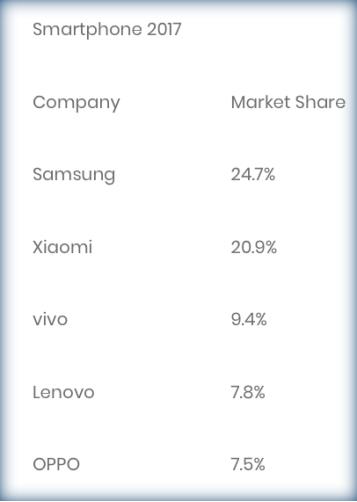 Of course, the downturn in the Indian market does not affect the performance of the Southeast Asian market. In contrast, smartphone retail sales in Indonesia and the Philippines increased by 18% and 16% respectively in Q1. GfK predicts that retail sales of smartphones in emerging Asia will increase by 7% in 2018.

In the GfK research report, the decline in the smartphone market in Western Europe and North America seems to have become the other two “hardest hit areas” in addition to the Asian market.

In Q1 of 2018, the retail volume of smartphones in Western Europe fell by 2% year-on-year to 28.3 million. Of these, the markets with the largest declines in retail sales were: the United Kingdom (-11%), Spain (-7%), and France (-4%). Fortunately, the scale of retail sales of smartphones in Western Europe increased by 23% year-on-year to US$14.5 billion, which was mainly due to the growth in sales of ultra-high-end models, which contributed to a 26% increase in the average price of each model.

However, despite the fact that the retail price is likely to continue to rise, GfK predicts that the volume of smartphones in Western Europe in 2018 will be the same as in 2017.

In the Central and Eastern Europe market, the volume of retail sales is increasing. The retail sales of smartphones increased by 35% year-on-year to US$5.9 billion, thanks to the increase in the average retail price (+29%) and the increase in retail sales (+5 % to 19.7 million). The GfK report shows that Ukrainian retail sales have grown by a maximum of 23%, while retail sales in Russia and Poland have both increased by 2% year-on-year. Looking forward to 2018 throughout the year, GfK is optimistic about the growth momentum of Russia and Ukraine, or will promote the retail volume of the smartphone market in Central and Eastern Europe growth of 7%.

Compared with the European market, the downturn in the smartphone market in North America continues. Q1 retail sales fell by about 5% to 35.8 million units. GfK predicts that in 2018, the retail volume of smartphones in North America will drop by 2%. According to a relevant market analysis obtained from reading notes, the US and Canadian markets may show more pessimistic development in 2018.

From a comprehensive point of view, although the global mobile phone market showed a downturn and a decline in Q1, the growth of some countries and regions has brought hope to major mobile phone companies. In addition, the increase in the sales of smartphones in most regions indicates that before the arrival of 5G, the emergence of high-end models will still allow the mobile phone brands with the strong strength to gain momentum for development.

20 things become less popular or usable due to Smartphones