So, without any further delay, let’s get started with the top 10 alternatives to the default Linux Terminal emulator and the reasons you should opt for them.

The first one in the list is GNOME Terminal for Linux, which is a default Terminal emulator for most GNOME desktop environment out there, and it can also be installed on any Linux distribution if you are currently not enjoying the best of it. GNOME Terminal has support for colourful text, and new Terminal instances can be opened in separate tabs for an efficient workflow. 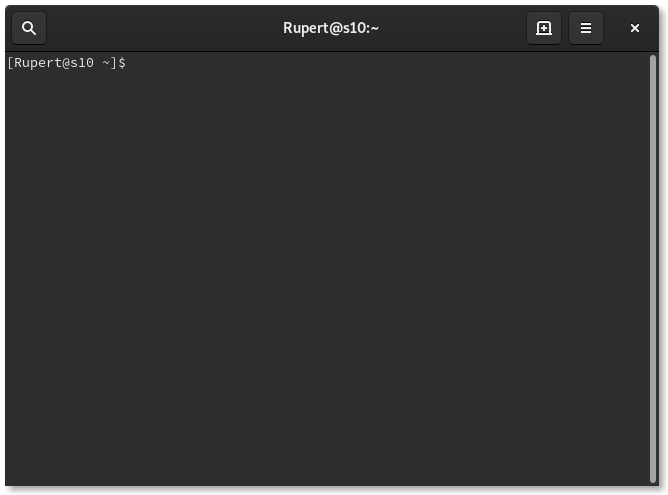 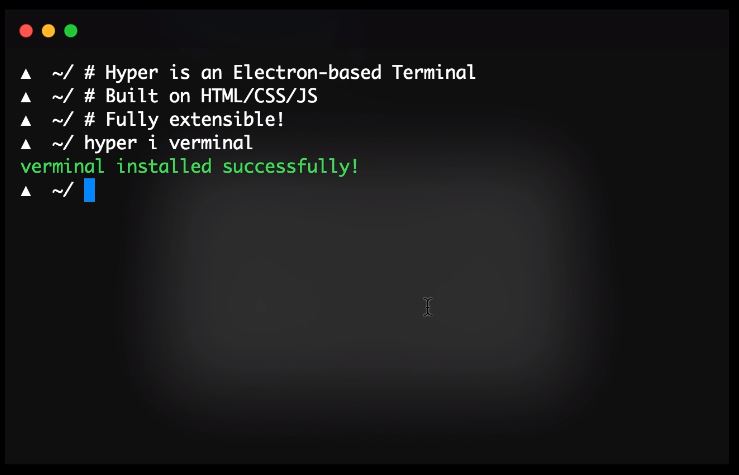 You can find a number of plugins in the Hyper Repository, and I am sure you will definitely some of them useful for you. With support for ZSH, you can actually change the complete look and feel of that the emulator and the support for various themes can in some way or the other increase your productivity and workflow. Just give Hyper Terminal a try to unleash the full potential of a Terminal emulator.

Guake is a simple multimonitor terminal for GNOME Desktop Environment. It comes with Compiz transparency and shows animation. It gives tabs environment and the names of tabs can be customized for the ease of working. We can configure the automatic start of Gauke Terminal at login along with some script which we want to execute. 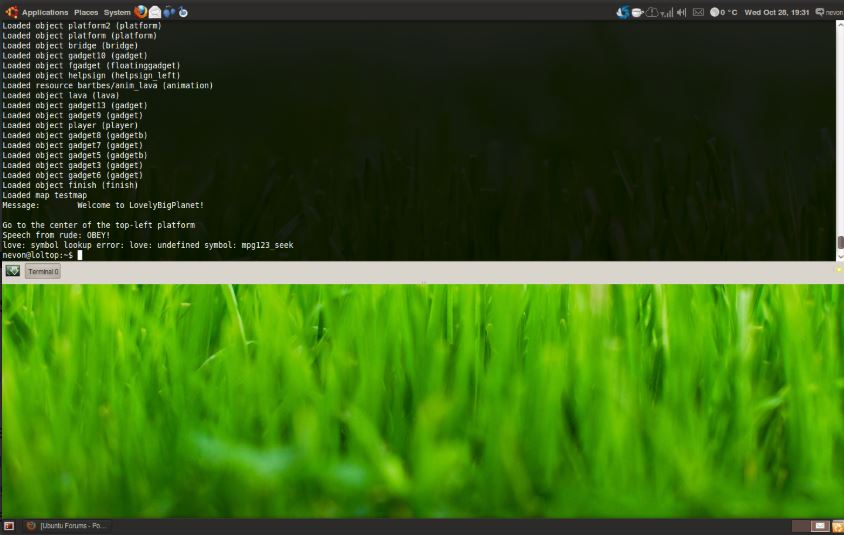 Gauke provides 130 colour palettes to customize the look and feel of the boring old black colour terminal. Like other terminals, we can show and hide it by simply pressing a single key again and again.

To install and compile from source code:

The needed system dependencies (Python GTK, VTE, …) and in the below command only use your own Linux distribution, for example fro Ubuntu, just leave the Debian and remove the arch and fedora.

Konsole is the default Terminal emulator for the KDE environment, and that eventually offers integrated support for a number of programs available in the KDE desktop environment. Besides that, Konsole is one of the most feature-rich Terminal emulators, which has support for multiple tabs and comes with a transparent background that has its own advantages and looks cool, as well. 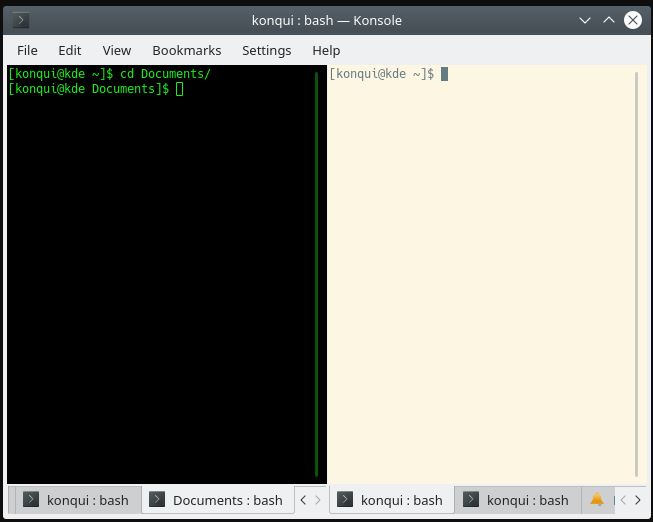 Hey wait, that’s not the end! Konsole also allows bookmarking of different local directories and SSH addresses and has support for incremental search, as well. Besides that, the users can export the output of a certain command to a text or HTML file which can be useful for analyzing the same later on. Konsole is a powerful Terminal emulator, and you can understand that by getting your hands down on it.

Comes as a default Terminal emulator on the LXQT desktop environment, it is one of the most lightweight and decently designed emulators you can go for. With a stylish font, and with the ability to customize almost everything it is one of the best Terminal emulators if you are fond of customizing the look and feel of your programs. QTerminal is a very responsive Linux emulator, which also has support for multiplexing. 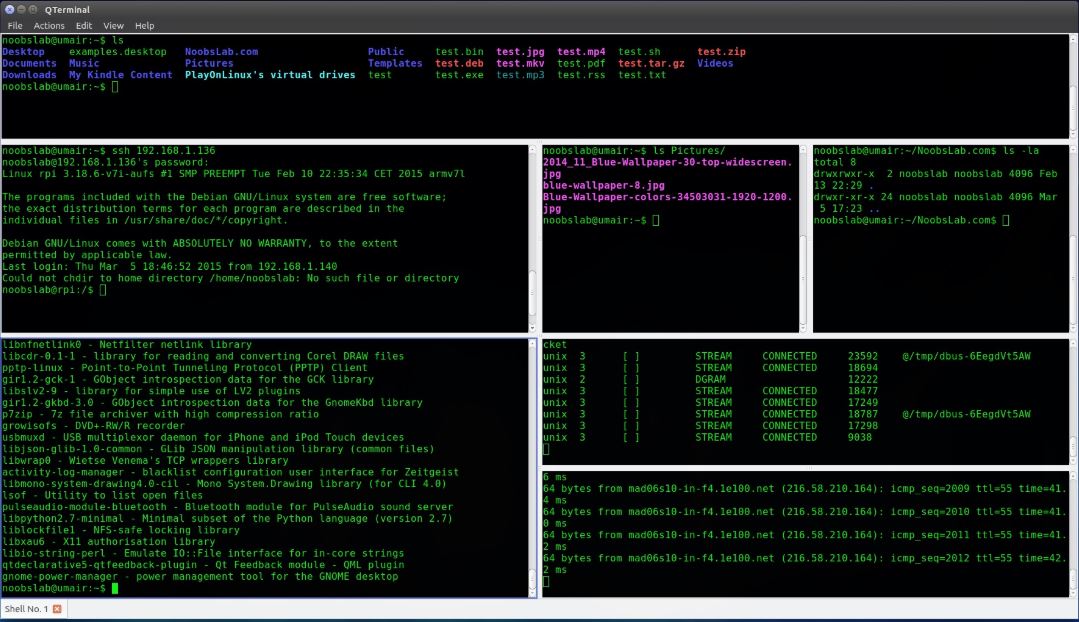 There is also the support for a drop-down mode for the execution of commands on QTerminal, which can be useful for executing certain commands and exit the window with just a single click. Needless to mention, QTerminal has support for multiple tabs and comes with a transparent background like most other popular Terminal emulators out there. The user can split the Terminal window both horizontally and vertically, which is also something that can be useful in certain situations. 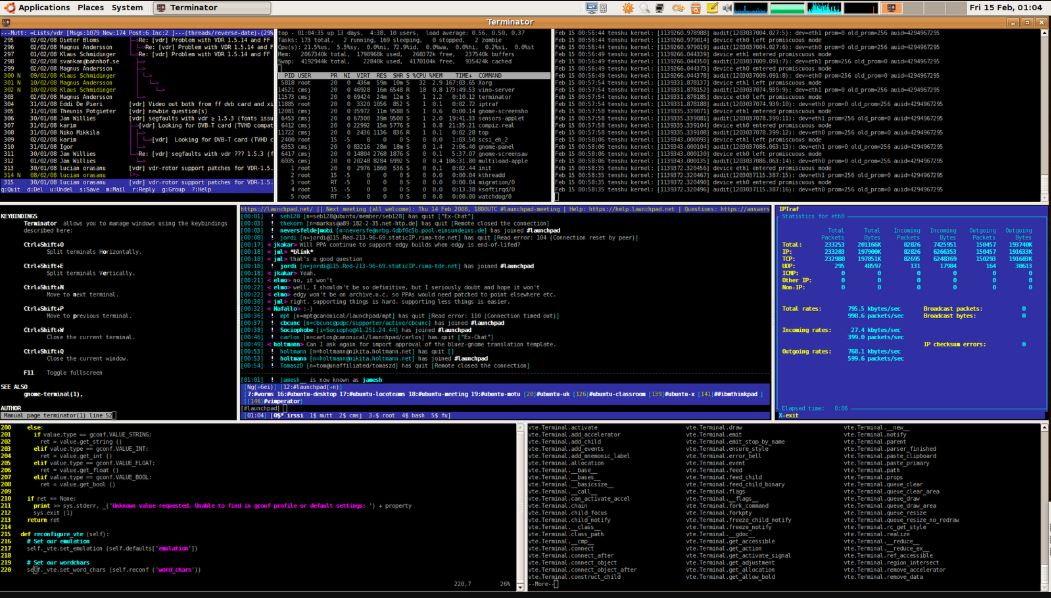 Terminator basically comes with a lot of customization options, which can help you arrange the Terminals in a grid-shaped arrangement, besides support for multiple tabs. With the number of key bindings, you can carry out the most common activities, and you can easily drag-and-drop tabs for the purpose of ordering them and enjoy a streamlined workflow. Terminator has support typing the same text in multiple Terminal instances at the same time, which can also be useful in certain situations.

If you have used the popular XFCE desktop environment, you might have already experienced using the XFCE Terminal which is is one of the most lightweight Terminal emulators for Linux and is suitable for Linux beginners as well. Though good for newbies, XFCE Terminal comes with all the standard features of a normal Terminal emulator and it also has support for drag-and-drop functionality to install programs, open files and do some other related tasks. 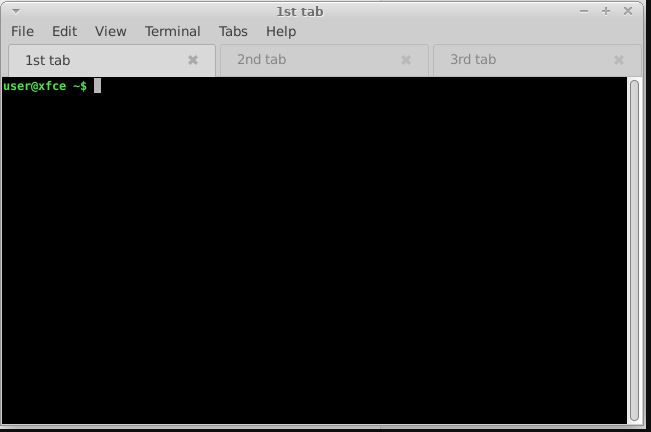 The user also has the option to make the background of XFCE Terminal transparent and there is also a compact mode which can be useful to customize the borders and toolbars of the Terminal emulator. XFCE Terminal might not be that beautiful, but I will recommend you to install it on your Linux computer if you carry out some intensive tasks and need a lightweight Terminal emulator in such a situation.

The next lightweight Terminal emulator for Linux in my list is Terminology. It is one of the best Terminal emulators with not so good user interface but comes with all the basic functionalities like multi-coloured contextual text, with support for practical file preview and many more. Even though it is lightweight and do not come with a lot of functionalities, it has support for tabs, which by far is the most important feature of any productivity program today. 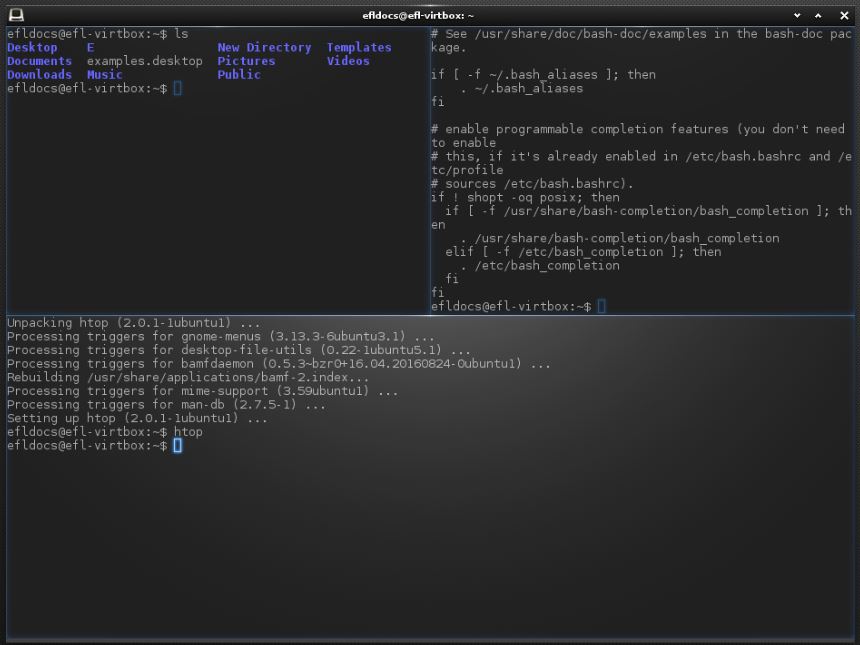 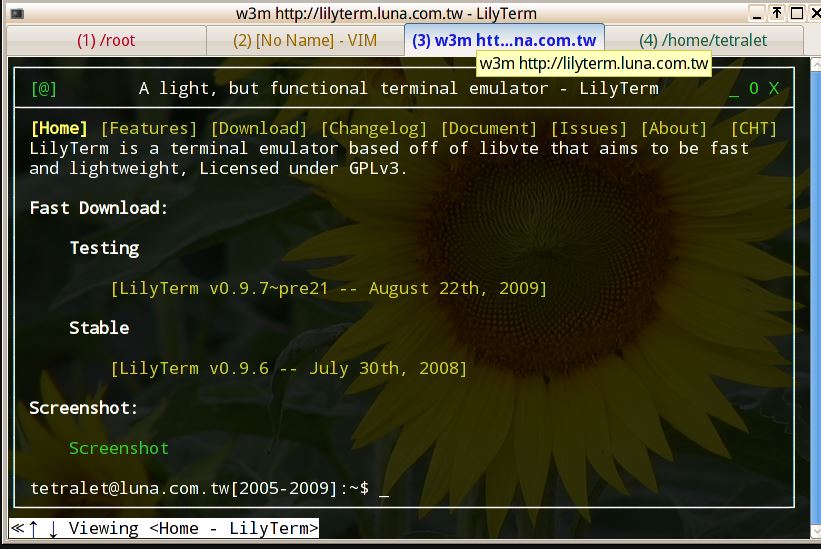 Just like most other popular Terminal emulators, Lilyterm also supports multiple tabs which can be very useful if you want to fragment your task into multiple ones. Besides that, Lilyterm has support for hyperlinks, where you can open a link directly on your web browser by clicking on the same on the Terminal emulator. To showcase your geeky attitude, you can even use Lilyterm in a full-screen window.

Another one of the best Terminal emulators is Tilix, which has all the basic functionalities besides being beautiful and user-friendly. Based on GTK3, Tilix is one of the most interesting Terminal emulators which has support for all the basic functionalities from drag-and-drop of links and files, the grouping of Terminals, background transparency, hyperlinks to everything else you can think of. Tilix also has support for notifications which can be useful if you are carrying out the number of tasks and is executing the number of commands at the same time. 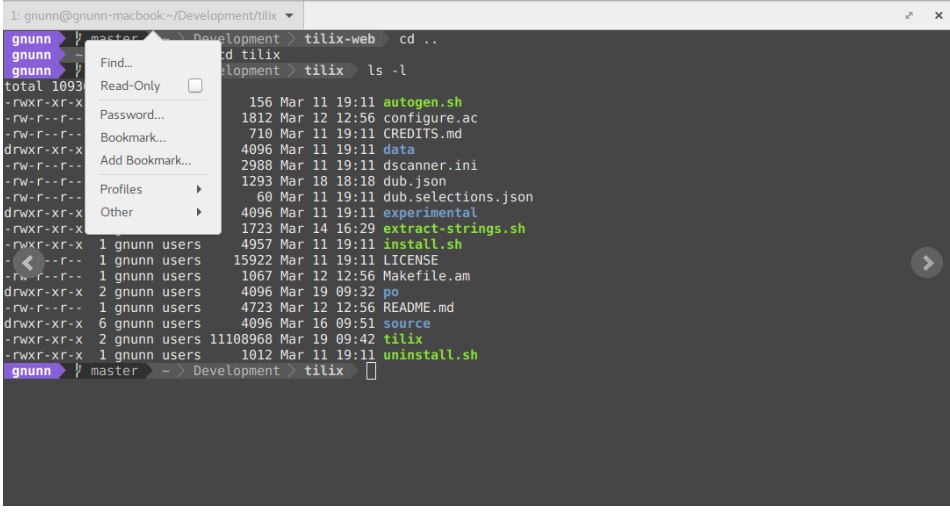 The notifications can be useful to help you understand once a process is complete or something wrong happens when you are executing some task. Besides having support for tabs, the grouping of tabs in Tilix can be saved to the disk, and you can start working from where you left off by loading the saved tabs from your hard drive. Tilix is beautiful and can be the ultimate Terminal emulator for you.

The last one in my list of the top 10 alternatives for the stock Terminal emulator for Linux is Aminal. Aminal is a modern Terminal emulator which is built by utilizing OpenGL that ensures better graphics performance compared to the other Terminal emulators available. If that is not something that matters to you, Aminal has Unicode support, which means it has support for all the available characters and that is undoubtedly useful.

Aminal has a number of customization options, and you can copy to, and paste from the system clipboard which is also useful as well. If you come across any link on Aminal, you can simply click on the link to open it in a web browser or download some content. Being a modern Terminal emulator, Aminal has support for the number of unique functionalities like support for retina display, hints and overlays to execute commands faster, multi-platform support, and many more to come. 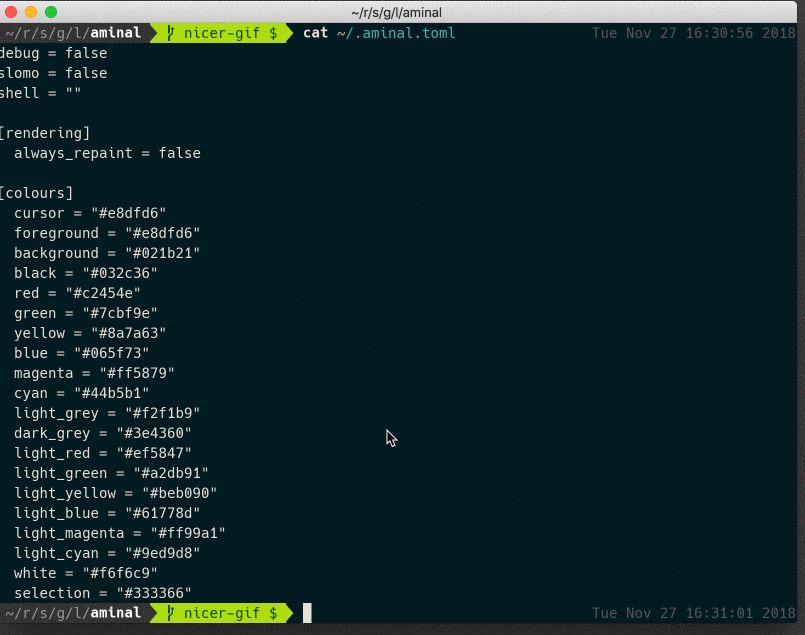 Hope the list of top 10 alternatives to the stock Terminal emulator for Linux was useful for you. Do you have any questions? Feel free to comment on the same below.

Other Articles to visit: 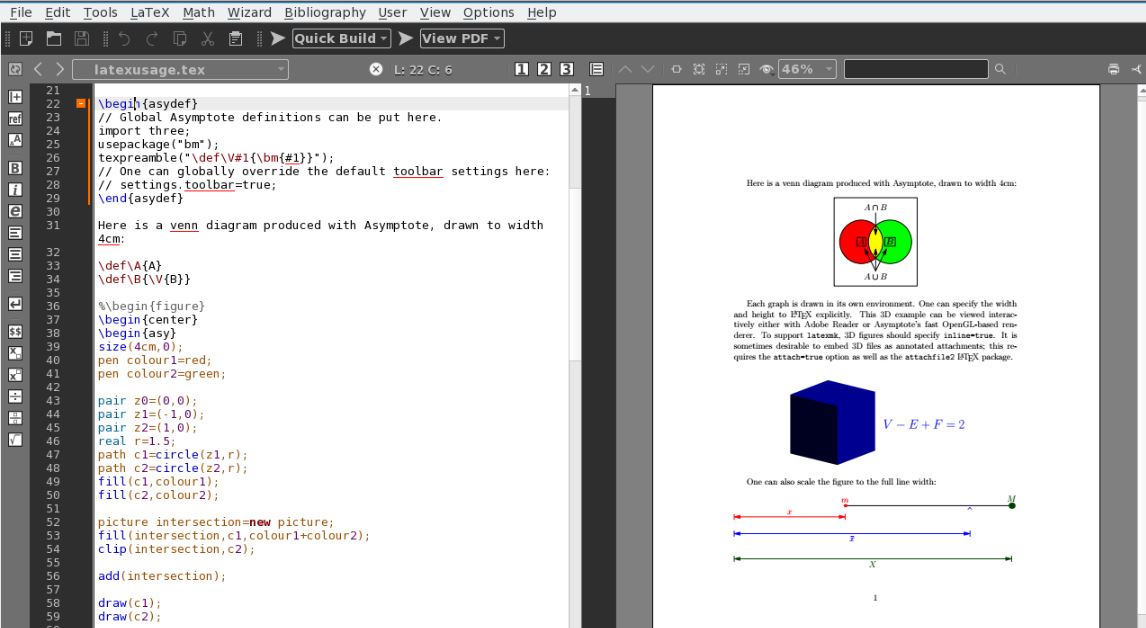 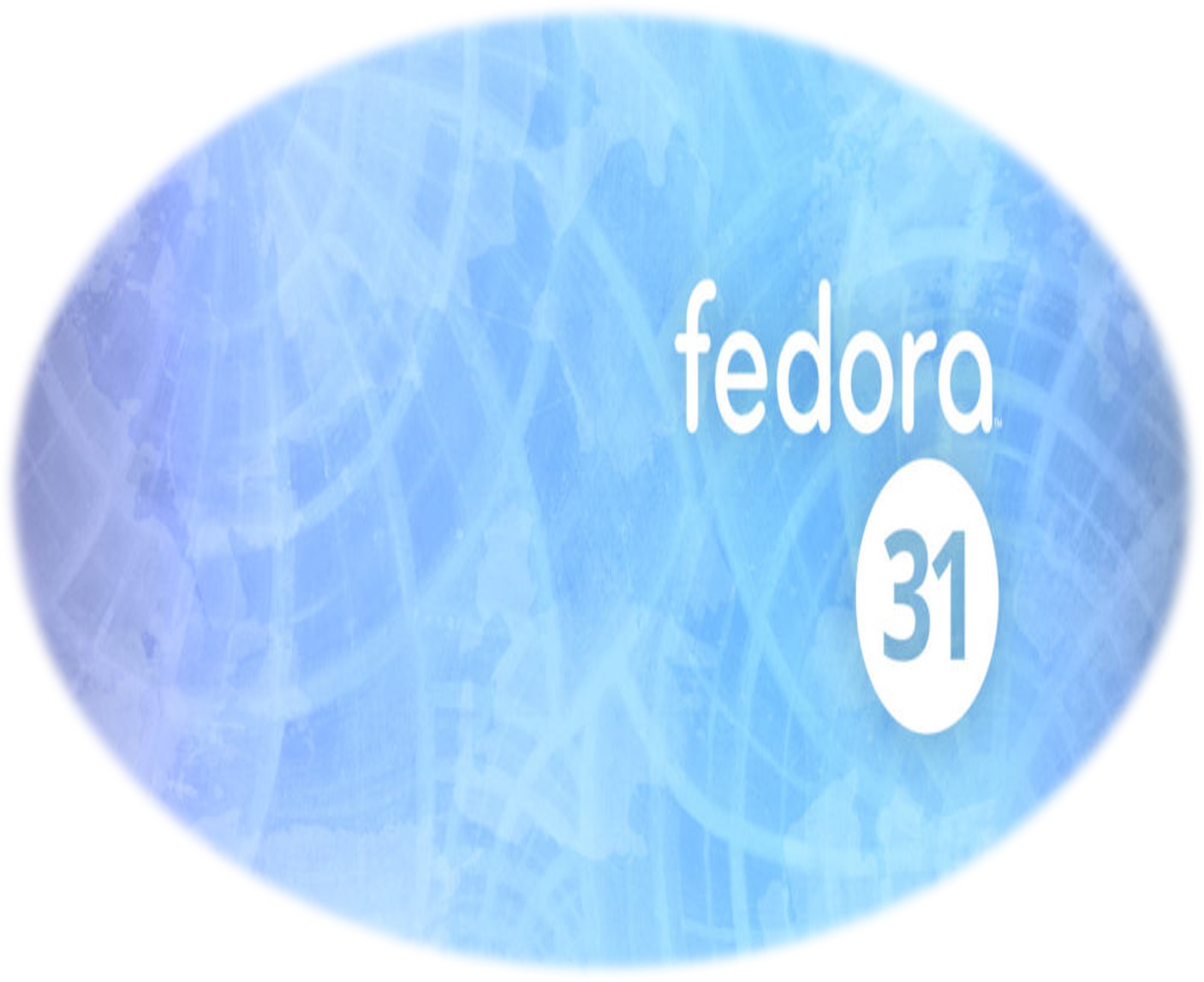