IPv4 vs IPv6: What is IPv4 & IPv6 and difference between them?

IPv4 and IPV6 both are popular Ip (Internet protocols) used to communicate millions of devices of the World.

What is IP (Internet Protocol) protocol?

In simple words, the Internet Protocol (IP) is a set of rules that define the origin and destination addresses to computers. It is a job of Internet protocol to deliver your email or any other form of Data to the right destination where you want to send them. You can compare it with the letter or postcard those you send with some address. And in the computer world that address is defines by the Internet Protocol. To deliver the data the IP transmits it in the form of a packet structure and further to perform this the IP combine with the higher level of a protocol called Transmission Control Protocol (TCP) to establish a virtual connection between the host and destination.

The IP protocol is a basic protocol in network communication. Every device connected to the Internet (whether LAN or Internet) will have an IP address that acts as a phone number. When browsing a website the browser will first get the IP address of the website, for example, 134.148.1.10, send a request to this address, and then the website will send the IP used by your computer to get back web page data. Imagine the process of making a meal order, almost the same.

IP (Internet protocol) is the backbone of the Internet. It is already near 20 Years of history. The IETF released the RFC 791 standard in 1981, and since then we have started using IPv4. IPv4 totals about 4 billion IP addresses. The IPv4 which is the fourth version of the Internet protocol. And the successor or the 6th version to the IPv4 is the IPv6. IPv6 is the next-generation IP address standard announced by the IETF in 1995.

Note: IPv5 was used to define an experimental real-time streaming protocol also known as Internet Stream Protocol. To avoid any confusion, it was decided to not use IPv5 and name the new IP protocol IPv6.

Difference Between IPv4 and IPv6 Addresses 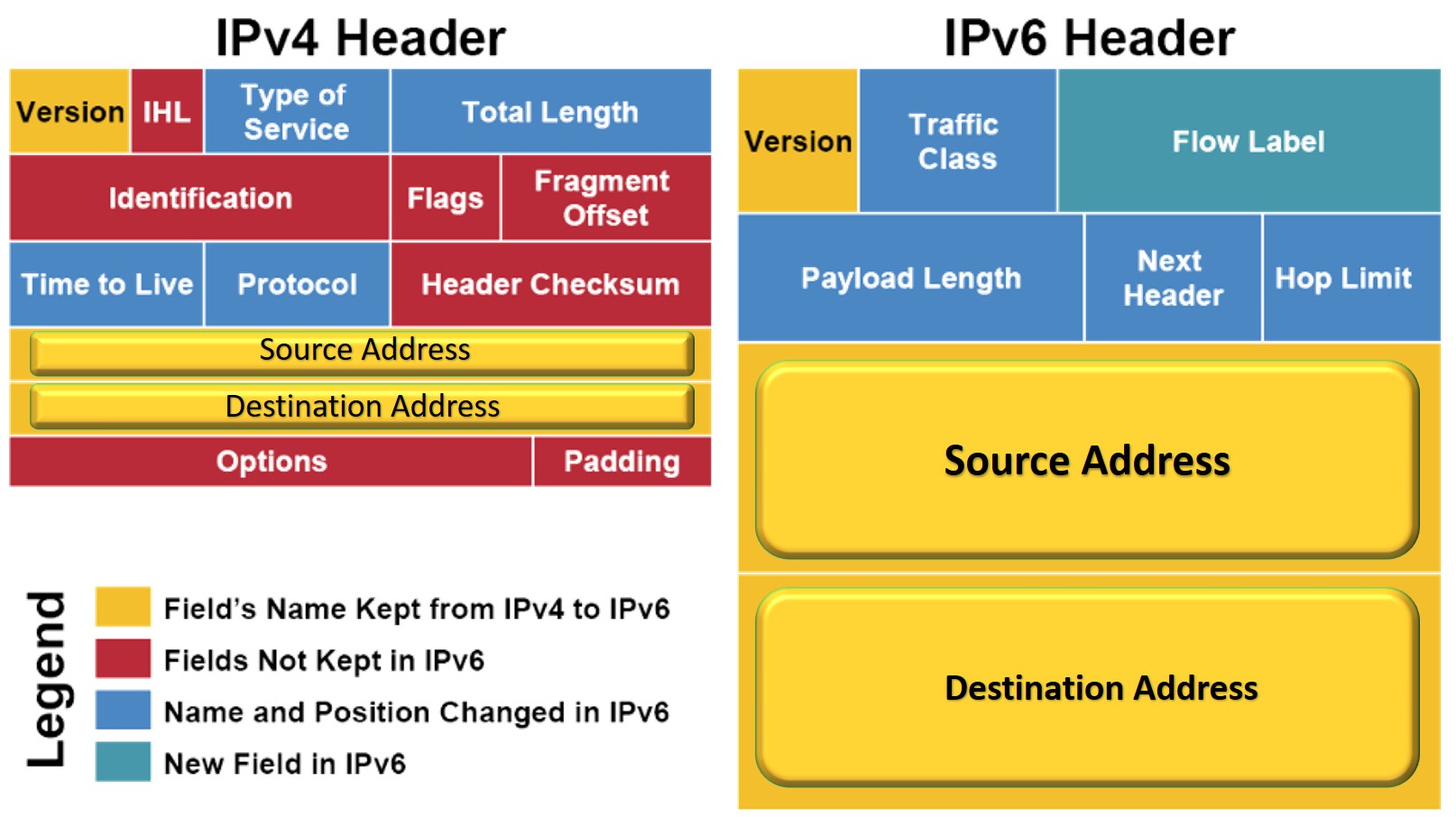 The IPv6 is the evolutionary upgrade for IPv4, however, still, most of us use IPv4 almost every day in our lives.

The address format in IPv4 consists of four integers from 0 to 255 (like xxxx), which may have a total of 256 to the power of 4 (ie 4294967296). Although there are some special-purpose addresses, such as 127.0.0.1 those are fixed for certain services. As the total number of IPv4 addresses available on the Internet is more than 4.2 billion. It sounds scary, but the population of the world has exceeded 6 billion. Just think if we assign one device per person, the IPv4 addresses will not be sufficient…

Also, if we neglect the growing population for a moment still the IPv4 would not be sufficient due to the rapid development of the mobile Internet and the Internet of Things. In addition to computers, smart devices abound, every mobile phone, smart bracelet, watch, router and other devices will occupy an IP address, even TV, smart refrigerator, smart washing machine, air conditioner, door lock, etc. can access the Internet Smart, moreover, smart furniture also needs its own IP address. In the case of a wide variety of networked devices, IPv4 addresses are stretched. At the same time, there are many organizations that have hundreds of IP addresses at the same time, but only dozens of addresses are actually used, resulting in a large number of IP addresses being wasted, making IPv4 addresses more scarce.

And to overcome from this scarcity of Ip address the IPv6 came into existence. The IPv6 address format is composed of 8 integers from 0 to 65535 (like x:x:x:x:x:x:x:x), and the number is the fourth power of the number of IPv4 addresses. Compared with IPv4, IPv6 128-bit address length can provide 3.402823669 × 1038 addresses. IPv6 claims to assign an address to every grain of sand on the planet, it is inexhaustible.

However, we still using the IPv4 at great extent because most of the devices or service providers, yet have not adopted the IPV6, that’s why you may have seen many times both the IPv4 and Ipv6 co-exist together on the same device.

Another reason why most of the website and other applications uses the IPv4 is due to the ease of remembering it while the IPv6 is complicated too much to remember. I have to say that, the IPv6 was not designed with compatibility in mind. That’s why IPv4 cannot be smoothly migrated to IPv6. In the migration process, telecom operators, websites, and other organizations need to do a lot of work.

Why IPv4 is more popular then IPv6?

According to global IPv6 statistics released by Google, by the end of November 2018, the global IPv6 penetration rate has exceeded 25.04%.

Why is it so difficult to switch from IPv4 to IPv6?

The main reason is that IPv6 is not designed to be compatible with IPv4, which makes IPv4 and IPv6 interoperability difficult.

IPv4 and IPv6 are two languages, but the syntax and tense of the two languages are different. You need to translate them to communicate. As a result, the original version needs to re-develop a version of IPv6, which increases the cost and discourages many companies.

However, since there are so many IPv6 addresses, it will definitely bring about the impact of the cost reduction of IP addresses. In particular, the emergence of switching technologies between IPv6 and IPv4 addresses now allows businesses to switch to IPv6 networks at a lower cost.

On the service level, in addition, to directly selecting IPv6 services, some cloud service providers also provide IPv6 and IPv4 interworking services. The new services are directly connected to IPv6, and the original services are interoperable through the purchase of services, and the lane conversion cost is further reduced.

At present, the weak links of IPv6 promotion are in applications and terminals. Now, the carrier’s backbone network and mobile network have opened the IPv6 bearer function. However, routers or mobile phones in many users’ homes do not support IPv6. In addition, most applications take IPv4 traffic while doing network communication.

Terminals such as routers or mobile phones in the hands of users can be supported IPv6 by updating or upgrading through software upgrades. For example, Apple has supported the IPv6 dual-stack network after the latest iOS12.1 upgrade.

On the application side, there is no technical problem with the end-to-end IPv6 single stack of VoLTE. The network and DNS also support IPv6, which can fully support pure IPv6 applications.  The evolution of the network upgrade to IPv6 is certain. At present, the number of IPv6 users in India and the United States has already exceeded 100 million, leading the world. Moreover, with the advent of the 5G epoch; faster network speeds with more IP addresses for devices require 5G+IPv6+ Internet of Things to build the future world of the Internet of Everything (IoT).

So, What the users need to do during the migration process?

To put it simply the users have nothing to do with it. On our personal computer (PC), the mainstream operating system (Windows / Mac / Linux) has already supported IPv6; and the 3G or 4G protocol used by mobile phones does not seem to be affected by IPv6 because the latest smartphone has the IPv6 compatibility and if not it could be easily introduce using the software updates the mobile manufacturers. What we have to do is wait and let the telecommunications and other customer services to upgrade IPv6…

How to install KDictionary offline dictionary app on Ubuntu Linux

Most information that you need at some point in time is readily available to us today with the aid of the internet, and the...
Read more
apps

In this modern era, you don’t need to carry a dictionary with you wherever you go just because you are a voracious reader or...
Read more

How harmful is the radiation from mobile phones and cell towers?

Mobile phones, or better, smartphones are part of our...
Read more
Technology

What is NavIC? How is it different from the other navigation system?

When it comes to navigation, GPS is the most...
Read more
What is?

What is the number system and its different types?

When we deal with numbers, whether for the purpose...
Read more
Technology

Data is like money nowadays, and in the coming...
Read more