Both the IPTV and OTT have the same function that is to send data to end users who need it completely. But they have a lot of differences present among each other which we are going to discuss in the article and also check what these technologies are.

To merge both the internet business with the TV industry the best technology which is mostly used today is OTT and this is the trendiest condition.

Contents show
But why did OTT become trendy and not IPTV?
Now let’s discuss what is OTT service?

But why did OTT become trendy and not IPTV?

Now we need to understand this thing in a clear way. OTT if stated simply can also be described as a service range which consists of service of using network services on any device present which can be anything ranging from the laptop, mobile, tablets etc.

Now, we will discuss both the services and how they work one by one. Then only understanding the differences will be easy.

You might be wondering what the full form of OTT is (OTT stands for Over the Top) which is the service in which the telecommunication devices are bypassed by the companies and they directly display their products on the internet so they become the creators of the service. Some examples of this service are Amazon Prime and Netflix.

Now let’s discuss what IPTV service is and what is the function of this service?

IPTV (Internet Protocol Television) means that data is streamed through an IP Address. This means that no satellite television service is required and streaming of television shows will online,  those run continuously and anyone can join the stream to watch them.

Both IPTV as well as OTT are similar but there is a big difference IPTV needs a managed network as well as infrastructure which is granted by the operator while OTT does not need any dedicated infrastructure to do so. OTT is gaining momentum as many service providers have popped up ranging from YouTube, Netflix, and Amazon Prime Video etc. 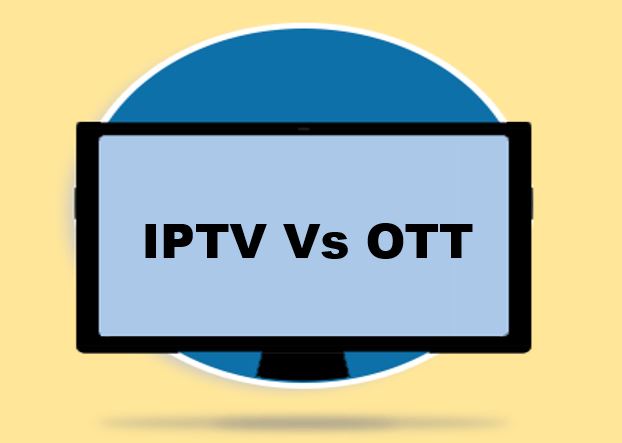 Now we will look at the differences between both the IPTV and OTT by creating a table which is mentioned below:

The big difference between both OTT and IPTV is the video quality. In IPTV quality is good compared to the OTT  because service providers transmit the information to your televisions via high-speed broadband through well-managed infrastructure.

But in OTT what happens is that the infrastructure is unmanaged and so there is a lack of quality because it directly goes to the end-users and not any service provider.

The company version, ownership, content quality, service quality, expense etc. also have a difference in both the OTT and IPTV.

Over the top media service (OTT)  depends on the end user and take in their considerations to get feedback and suggestions to improve the service as they believe that end users are responsible for their success.

It is believed that OTT covers a broader range because it is seen that in IPTV users have to ask the service providers to put their channels on a set-top box which means they are highly dependent while in OTT the data is directly provided to end users and they can opt whatever they want to see from the available content without any permission of the service providers.

But OTT has always been regarded as a better service as OTT providers are gaining much more traction than the regular IPTV providers. In OTT, you can get multi-screen viewing, viewing at your own luxury as well as video on demand service, which is wanted by the user so it has evolved with many content providers increasing day by day in this field.