Google Play Store is the home for millions of apps to run on Android and Chrome OS. Most of the apps are available for a purpose, and they cater to the needs of the users quite nicely. But there is another domain in the Google Play Store, where you can find useless apps, downloading which, just squeeze the resources, without doing any work.

Lastly, there are apps, which are fake. The fake apps resemble the original ones, and sometimes, it can be difficult to recognize the genuine ones, in the midst of many fake ones. The fake apps not only do any tasks, but it can also be a threat to your privacy, as they can steal data from your device, and use it for various malicious operations, or something else. It is just difficult to comment on the intention of such unscrupulous developers.

Fake apps on Play Store! But why! 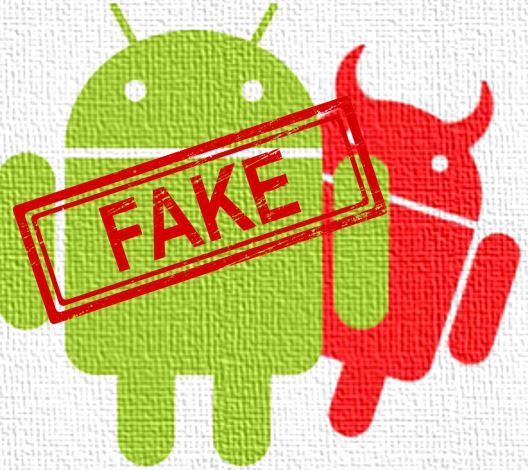 But why so many fake apps on Play Store! Yes, there are numerous reasons behind the availability of numerous fake apps on the Play Store, but not on the Apple App Store. Let’s find out.

Android being an open source platform, most of the smartphone manufacturers use Android as the operating system, unlike iOS, which of limited only to Apple devices.

A big user base

Next, most developers, who have unscrupulous intentions, and want to use their coding knowhow to exploit other users, will always search for a platform, where the most number of users are present, so that the fake app or malware, whatever may it be, reach the maximum number of users. There is no doubt, Android has a huge customer or user base, as most smartphone manufacturers power their smartphones with Android. So, the hackers or the developers of the fake apps can reach a maximum number of users easily, which help them get the best out of their hard work.

Don’t worry, I will discuss some helpful tricks, which can help you recognize fake apps so that you can keep yourself away from downloading them, and put yourself, and your system at risk. Don’t blame me for being unable to give you any examples here, as Google might be working with the problem associated with fake apps, which is pretty good, but it is worth being capable of recognizing fake apps, which might come on the Play Store from time to time.

The first way, which might not be helpful now is, to have a look at the icon of a particular app. If you are an experienced Android user, you must be knowing the actual look of the icon. If you find other apps, with the same name, just have a look at the app icon, which might reveal whether you are going to download the genuine app or not.

But if you are in a hurry, you might miss out the developer name or confuse it with the real name, as most developers of fake apps use names, which are visually similar to that of the original developer name. Pay close attention to the complete spelling, and it will help you recognize the fake one.

Third, the genuine apps are first loaded to the Play Store, which means it will definitely record a higher number of downloads compared to that of the fake ones, which are uploaded just after the genuine app becomes popular. Keeping that in mind, you can have a look at the number of downloads of a particular app, which can help you recognize the fake apps. This can be helpful if you are in a confusion between a genuine and a fake app.

Fake apps in most of the cases can come with lucrative names, or those names, which can attract a novice user to download it. Most of the users can find the app name, and the term update beside it, which might make them think downloading the app will update the existing version of the old app, which is completely wrong, as all the app updates are centrally managed by the Google Play Store.

It might also come with a different name, for example, WhatsApp Pro, which might make the users think, it might come with extra features, not available in the normal WhatsApp app. Even it might also happen, fake apps are sold on the Play Store, as people want better features from it, and they are not hesitant to play the developers for the same. The same problem happened a couple of years ago, with the Microsoft Store, just after the release of Windows 8.

Lastly, another great way of recognizing fake apps is to read the user reviews of a particular app. If the app is genuinely a fake one, the users will never give a positive review for the same, and you can directly move on to the review section, if you are in a dilemma about whether the app is genuine or not. In case you do not find enough reviews for the app, but you can see ratings below 4.0, it is possible that the app is fake.

For example, if you’re looking for WhatsApp, instead of searching for it on the Play Store, you can directly search it on Google or any other search engine, which you are comfortable with, and the genuine link for the website will be either the first and the second option.

Now, visit that website, and most of the websites will have a link to offer you the same app from the Play Store, where you can directly download and install the app. The website will surely have a lot of information, and make things transparent so that you can easily understand the genuine apps. It will keep away from the hassles of searching for it on the Play Store, which might show you results that might confuse you.

Now questions might come in your mind, how to keep away fake apps, and what Google is doing about it.

Google Play Store introduced the Google play protect recently, which can easily keep away fake apps, or the apps, which come with bundled malware. But that might not be helpful every time, as the developers of the fake apps might play along with the border of the Google Play Store policy.

Google periodically keep away the fake apps, but that is not real-time in nature, which is actually a loophole and the fake app developers can reach a number of users by fooling the Google’s App Search Optimization or ASO. But, you intelligent, and you can always make the services better by taking some simple steps from your end if you find any kind of a The Play Store.

Once you find a fake app on the Play Store, go through the following steps to make Google aware, it is housing a fake app on its store.

Scroll down, and reach the end of the page, and you will find an option saying “Flag as inappropriate”. 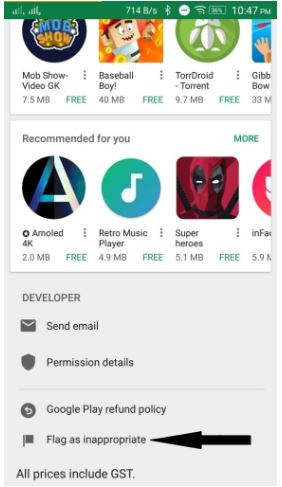 You will get a number of options, from where you will choose “Copycat or impersonation”, and tap on the Submit button. 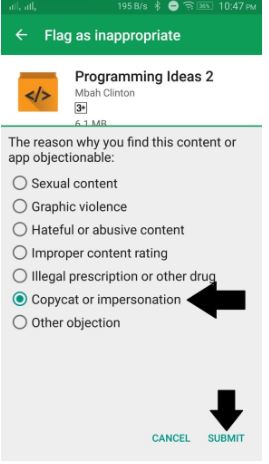 It is not that the app will be removed right away after you submit an objection. But if a number of users do the same task on finding the same app after that, Google will surely don’t turn a blind eye to your requests.

The problems with fake apps

Though if you are an experienced user, you can easily keep yourself away from fake apps, but you should always report the fake apps due to numerous reasons.

It is a threat for all

Fake apps are not only a threat to you or the person, who is downloading it, as it can spread malware through emails, which can eventually affect you if you get any kind of email from an infected person’s mobile phone, and you open it mistakenly.

Fake apps have every possibility to steal your data or it can be a spyware, which can be taking away your privacy. It is something, which you should never allow, as smartphones nowadays know everything about us. Even with social engineering, your activities can be tracked, know your likes and dislikes, which can be used against you either by real life or cybercriminals.

Malicious malware, which infects your device, without your consent

If you are having other great ways to keep fake apps from the Play Store, don’t hesitate to comment it down below, as the comment box is all yours.

Top 5 Smartphones with 4 GB Ram, for different niche of users