The hardcore gamers are quite aware and a bit unhappy about the absence of Fortnite on the Google Play Store. Well, that seems to be a judicious business strategy by Epic Games, the developers of the famous PVP Battle Royale game. For a favorable commission cut by the Samsung Store, Epic Games took its decision to distribute its flagship game through the Samsung Store, ditching the everyone’s favorite, the sweet home for all the apps. Yes, I am talking about the Google Play Store. No, judging whether the decision was judicious by Epic Games, or how much loss Google will face, is not my topic of discussion.

But I just want to talk about a smart initiative by Google, which can prevent scammers from stealing personal information by placing some similarly looking fraudulent apps, which is Fortnite in this case. On searching for Fortnite on the Google Play Store, you will get the following message. 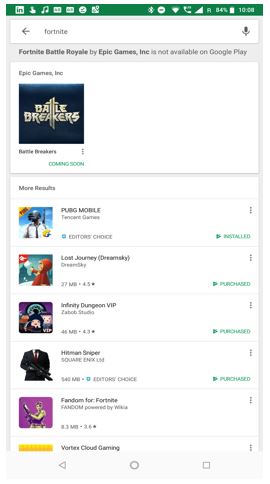 This makes a lot of sense, as the users will be informed about its absence, and they will not attempt downloading a similar duplicate app from the Play Store. The reason is quite simple. Other apps will obviously not come from the same developer.

Users will now be able to keep away from downloading an app with the same name out of enthusiasm. The Google Play Store, unlike the Apple App Store, is criticized for housing some fraudulent or duplicate apps on the Store, which eventually leads to a data breach and a lot of other problems. Most people might even claim the Google’s App Store Optimization or ASO. But that is a topic of debate. So I will not be in that.

It is really a good initiative by Google to inform its users about the unavailability of Fortnite, but I wish, the feature is rolled out for other unavailable apps, as well. Even today, other popular games are not available on the platform, and Google should show a similar message for the most unavailable apps.

Hope the small information was helpful for you. What do you want to say about the Google’s new feature and the unavailability of Fortnite on the Play Store? Feel free to comment your views down below.

What is XProfile for Instagram and why we need it?

Why you should use WhatsApp Business even if you don’t have a business?