AVerMedia is a leader in developing digital video and audio products for streaming and gaming purposes. Since the company was established, it has been committed to the study of digital imaging technology and has continued to innovate to cater to gamers and content creators.

Well, we already have reviewed a couple of Avermedia products and they never disappointed us, most of them were passed through capturing cards designed especially for gamers, however, this time we have an HDMI to USB TYPE-C Converter. Of course, its sounds like some ordinary device with one side HDMI port and another USB, but no it is more than that.

With having experience of working with ExtremeCap, here we are with the review of AverMedia ExtremeCap UVC BU110. But before hopping directly into its features and working, let’s first have a look at the specifications of the product.

The AVerMedia ExtremeCap UVC BU110 capture box is packaged in a compact white cardboard box. The overall design is extremely simple. The product image on the box is exactly as the product, along with the series and the compatible ports that are USB3.0 and HDMI interfaces are also marked on the surface of the outer box to make sure the user could understand the product without operating it.

On the left side, a QR code to get product info directly using a smartphone; apart from it – internal packaging details and product descriptions are printed on both sides and at the bottom.

As you open the package, the first thing you will see is the silver tint with matte finish ExtremeCap inside a black foam. The combination of black and white was giving a strong visual impact. 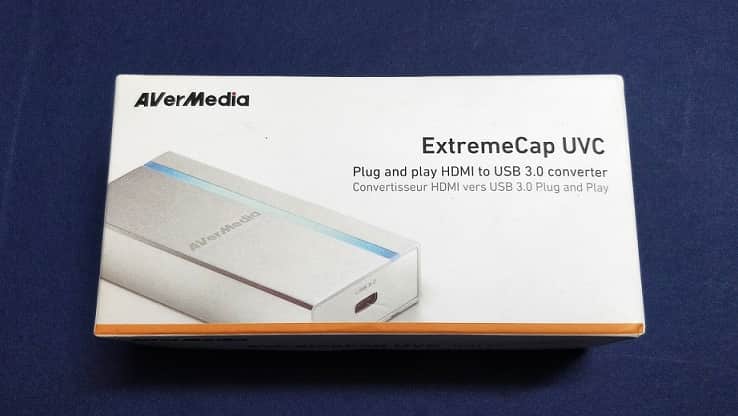 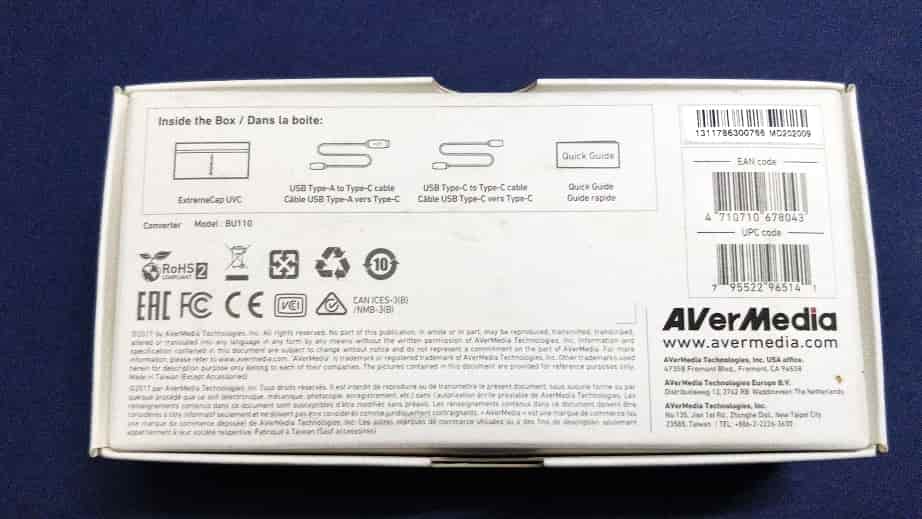 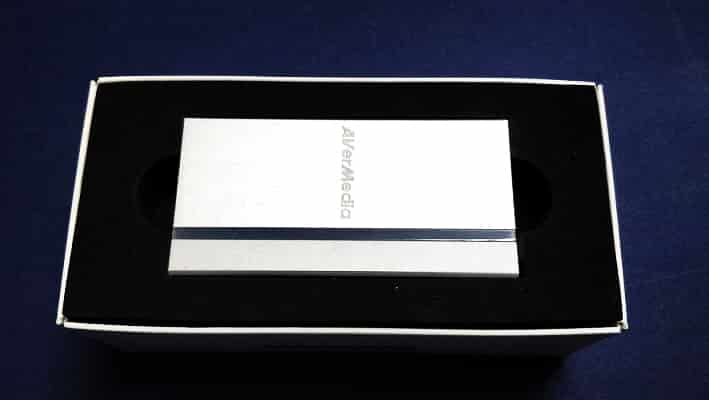 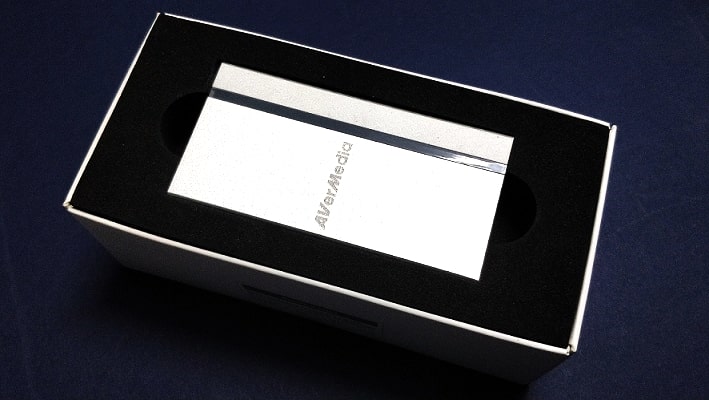 Beneath the foam, the user will have a manual and USB 3.0 to USB -A along with Typer-C to Type-C interface cables. 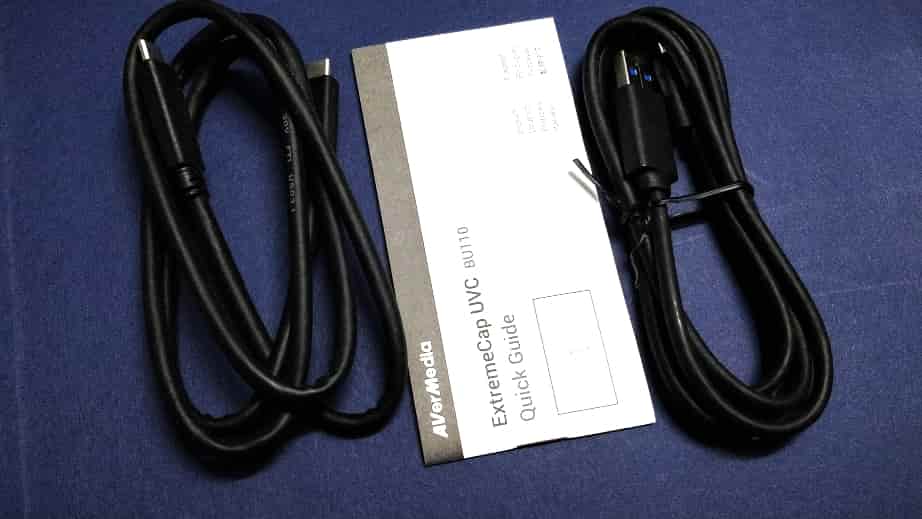 The body of the BU110 in silver metal looks quite attractive whereas the top and bottom are white hard plastic. There is also a transparent gray stripe on the front under which holds an LED tube that can display red, blue, and yellow colors. The LED bar work as an indicator for the status or connection status of the BU110. With red, there is no active source at the input and with blue, the camera is connected and provides a signal.

The usage of an aluminum case helps the device to dissipate the heat evenly and ensures that the hardware does not get too hot and works perfectly even after several hours of continuous use.

The overall design of BU110 is ergonomic and modern, the silver frosted metal feels good in the hand, and it is exquisite and beautiful when placed on the table. 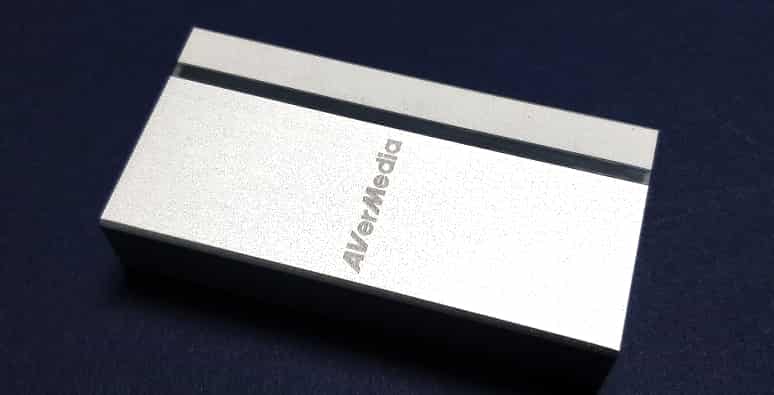 The backside of the converter is blank almost but with a sticker on the back with functional and warning signs, as well as the factory barcode. 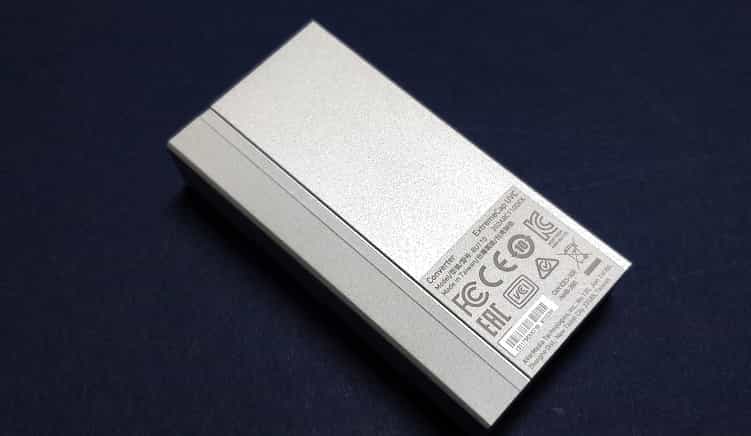 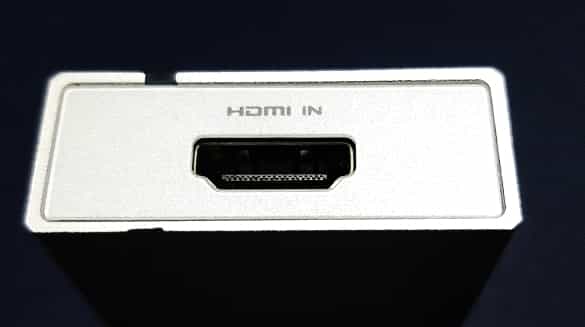 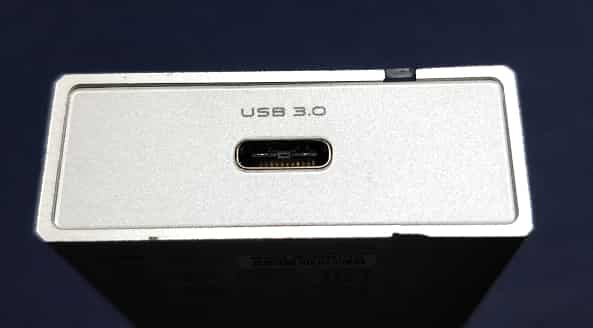 As expected from AVerMedia the product design is simple but attractive, the company doesn’t leave any room for criticism.

The AVerMedia ExtremeCap UVC BU110 only needs to be connected to a USB port and on the other side to an HDMI source that supplies a signal. It is HDMI 1.4b on the input and USB 3.0 Type-C on the output, which is compatible with USB 2.0. Thanks to the USB Video Class (UVC), the card not only supports Windows, MAC OS, and Linux but also mobile devices with Android. No additional drivers are therefore required.

While reviewing the device, we tested the capture card on Windows 10 with Streamlabs OBS and OBS Studio and on Android with the CameraFi Live app, which AVerMedia recommends. ODS (open broadcaster) is a free and open-source video recording and video live streaming software. Using this software, users can record videos and live broadcasts without consuming many resources as compared to other similar software. It records in MP4 format and does not need to be compressed again. It does not limit upload traffic, FPS, resolution, easy high-quality 1080P 60FPS, and high-quality 320kbps.

At the same time, whether it is a live event or a recording, the BU110’s onboard video amplification and color space conversion functions will greatly improve the playback quality. Or you can use multiple BU110s to further improve playback quality.

Ultimately, the BU110 certainly be used in combination with many software solutions. Just make sure when connecting that the card gets enough power. For example, if you use a passive hub to which devices are already connected, the hardware does not work properly, freezes, or does not display the full-color spectrum.

To use it, first, connect the HDMI interface of the BU110 to the video source or camera, and connect the Typer-C interface to the computer or smartphone.

The video recorded by the camera is pushed to the OBS video interface through the BU110, and the video size can be adjusted arbitrarily in OBS, which can be full screen or stretched and shortened. We can record the video as well with a custom frame rate and resolution. It supports 1080P 60-frame uncompressed HDMI image capture. The AVerMedia ExtremeCAP UVC BU110 not only supports upscaling but also downscaling.

Players who play mainstream console platform games can also capture game videos through the BU110. Well, recording a high frame rate and resolution using any standard median without loss is not possible, even if the bit rate is set to the highest, the captured picture is still blurry, and there will be frame drops. But after passing through the BU110, you can clearly feel that the picture becomes very clear and smooth, and it is easy to record high-definition picture quality. However, it should be noted that it requires a PC with sufficient configuration to record 1080P 60 fps lossless video. If the configuration is too low, the frame drops will be there. After all, the device’s main function is to convert (from HDMI source to Type-C) your live digital video + audio signals streaming.

As I said earlier BU110 can also perform streaming videos on mobile phones using some third-party apps such as CameraFi Live (only supports Android), and then connecting the camera or video through BU110, the live broadcast picture quality is exquisite. User can use their smartphone or tablet as a secondary Live display to get a detailed view of what they are capturing which is not possible on the small LCD of DSLRs or video cameras.

Further, we can also connect set-top boxes and Blu-ray/DVD players to capture the video, so you won’t miss out on good TV shows and movies.

Apart from OBS and Android app, the setup under Streamlabs OBS is very easy. A video capture device is added and the BU110 is selected. You then usually end up in the settings.

What I particularly like is that no additional software needs to be installed on the system in order to be able to operate the card. This eliminates a very sensitive source of error. Hence, the overall experience of a user with Avermedia ExtremeCap BU110 will be great as ours. Its live streaming function supports lossless images, and can also perform zooming, color space conversion, and simplified data transmission on the captured video. All this also helps, if you are recording video using ExtremeCap, in video editing; professional-level recording effects are also provided for other video recordings.

Overall, this tiny Video capture unit of Avermedia is worth buying if you are a Youtuber or professional who creates content for various enterprises or commercial purposes. Personally, I like its features to support smartphones to push media feeds in real-time to see what my camera is seeing.

Learn swiftly what is a cryptocurrency, and its future?

5 Popular Music Players For iOS and Mac in 2021