Since the beginning of time, most of the new technologies that man has ever been obsessed have tended to develop acronyms of their own. The sphere of virtual reality has not remained untouched by this trend either. You must be perplexed after the jargon du jour being hurled at you from all directions. To clear your head and help you have a hold on whatever’s going around, I have written this article on what is the difference between VR (Virtual reality), MR (Mixed reality), and AR (Augmented reality) and why they are all not the same. 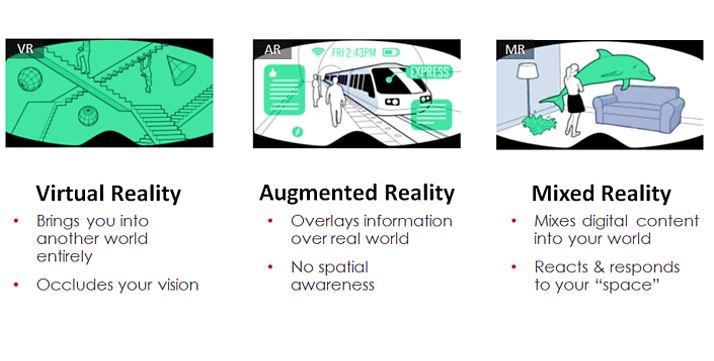 What exactly is Virtual Reality or VR? First of all, it is computer simulated. Next, it involves the technology of replicating the presence of an individual in a real or imagined world where he can interact with the surroundings around. VR takes you to a whole new world altogether. Sounds interesting, right? The immersive experiences that a user experiences in VR can be either created through purely real-world content, strictly hybrid material or even a combination of both bringing together the best of both the worlds.

The industry is coming up with new and more innovative content-viewing hardware every other day. There is a vast variety of them right from Google Cardboards to HTC Vive. The market is hot, and the news of each new launch makes headlines. Apart from headsets, companies are also coming up with the best of cameras that VR can offer. The most talked about cameras in this category are Nokia’s OZO and GoPro’s Odyssey which is the zygote of the collaborative efforts of Google Jump. Other cameras which have performed equally well in this category include Ricoh’s Theta, Bublcam etc.

360-degree videos are also popularly known as immersive videos. In immersive videos, the real-life scenarios are recorded in such a manner that view from all the sides is taken simultaneously. This provides the ultimate power of choosing the viewing direction while playing the video to the viewer.

Here lies another confusion. Industrial experts in every field have a niche to analyse every term profoundly and take out several meanings of the same. This often results in heated debates. In this scenario, the discussion is whether the 360-degree view is same as “real VR” and whether the two terms can be interchangeably used.

For simplicity, you don’t need to go knee deep into the jargon of the field. You can easily say that 360-degree view is another branch of VR beside the purely hybrid one.

Contrary to our previous discussion on 360-degree view, computer-generated VR as the name suggested is not based on real-world scenarios and is purely produced with the help of technology. There are further two branches of Computer generated – Virtual Reality. One branch related to pre-rendered video experience which is very much similar to 360-degree view and thus does not have reactive elements in it. The other branch includes VR that is presented in real time using a games engine.

As discussed earlier at the beginning of the article, these two branches of Virtual reality are the extremes. There is also a midway. The midway is the best of both the worlds as it has some elements of 360-degree view as well as some elements of hybrid VR. The audience is used to seeing this in movie theatres. You can unarguably say that the most exciting works in VR belong to this “third” category.

I hope that you are quite clear about VR and its various branches now. There is another side to the picture though. Two other terms might be haunting you recently: AR (Augmented Reality) and MR (Mixed Reality).

See, we explored the vast arena of Virtual related. You cannot debate with me when I say that Virtual Reality is intriguing and has managed to grab the attention of the audience. In such a situation, not much attention has been paid to AR and MR. the result being that even the line between these two is not drawn. From this, you can infer that these two can be interchangeably used. For now, AR seems to be more popular than MR. However, you cannot let go of this so quickly. Here is indeed a difference between the two terms. Let’s have a look at the difference between two so that you are never in the dark again.

One of the best examples of AR in the contemporary world is the table developed by IKEA. It is a kitchen table which can quickly help a beginner in deciding what to cook by suggesting recipes based on the ingredients kept on the table. Google also set foot in this world through Google Glass.

Mixed Reality is just like its name. It is that world where the real and computer-generated elements co-exist and even interact freely with each other. The hardware associated with MR includes Microsoft’s HoloLens. You must note here that Microsoft has refused to indulge in AR vs MR debate. In fact, it has come up with a word of its own which “holographic computing”.

Of all the technologies that we have discussed till now, MR seems the least feasible in the present day. Imagining that someday technology will exist which will be able to make its synthetic elements react to and interact with real-world elements is just wild. However, let’s leave this article on an optimistic note. Virtual Reality technologies are developing at a phenomenal pace, and we will undoubtedly discover many more developments in the years to come.

G Suite Basic vs Business: What is the Difference?

Google Augmented reality map feature soon be in your phones