Neither AMD Radeon GPUs are not backdated as many people think, nor AMD Radeon on the back foot while it comes to competing against Nvidia. The truth is, there is more than one reason, due to which even at 2020 and 2021 you should pick AMD Radeon over Nvidia RTX.

As we know that the Nvidia RTX GPUs are ruling the market but the AMD Radeon is also doing great work when it comes to quality gaming performance. Of course, if you search on the internet about which is the best graphics card in the market the first 3 names would be from Nvidia RTX GPUs in most of the articles, but that does not mean all the AMD GPUs are worthless to consider. Most of such articles related to “best GPU in the market” or “the best gaming GPU” is meant for the enthusiast gamers and buyers. But all the gamers around the world do not belong to the same economical category, there are of course other GPUs they can buy apart from the enthusiast Nvidia RTX line up.

When the Nvidia RTX 2080, RTX 2070, and RTX 2060 launched, thees three GPUs set a new standard of gaming performance around the world. Even the next-gen consoles PS5 and Xbox Series X are also powered by RTX GPUs. But you must know that every kind of product has multiple segments of buyers. The segment varies depending upon budget and purpose. While it comes to the budget segment which is quite bigger than the enthusiast segment, there comes the AMD Radeon GPUs. Even in the case of CPUs, you can see that the AMD Ryzen CPUs are way more affordable than the Intel Core-i series CPUs. Even the enthusiast-level AMD Ryzen CPUs do come cheaper than the flagship level Intel Core i7 and i9 CPUs. Though in the CPU market AMD itself is the current leader due to the value they provide with their chips. Along with AMD Ryzen CPU, the AMD Radeon Graphics Cards also do follow the same trend. Yes, AMD GPUs are quite good when you compare the price with equivalent Nvidia GPUs. Related Articles: Why Ryzen 4000 Series APU is better than i5 10th Gen CPU? 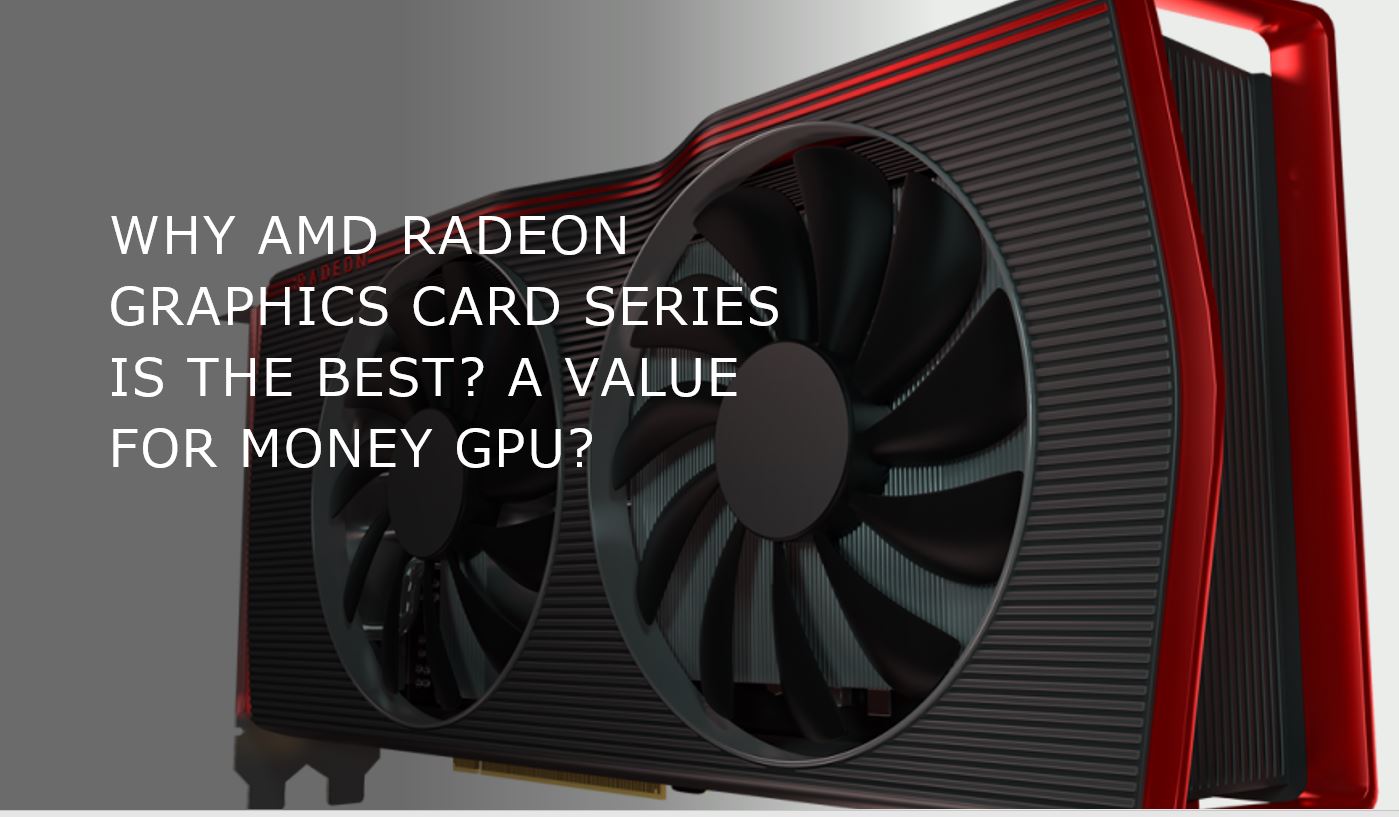 Why to compare Nvidia RTX with AMD Radeon RX?

While there are only two companies there who had the never-ending rivalry since the beginning, the comparison must be there. But, in 2020 such comparison and discussion become even more necessary as the tendency of people leaning more towards following the trend. However, the trend is not always the best choice for you. In such COVID-19 affected world, where there is recession everywhere and the average income of people is reducing per capita, there you must invest money on necessities but not on-trend. I have seen almost hundreds of videos on YouTube from creators around the world who are building gaming PCs, and almost 95% of them are using Nvidia GPUs. Because most of them do prefer using Nvidia RTX GPUs. Now when the RTX 30 series is also on the verge of launch, I am sure that those people and their followers would lean towards the RTX 30 GPUs instantly after launch.

So, to untie this debate, and to clear all the points about what should you consider while buying a GPU and a PC, this discussion is taken under consideration. And to start the discussion in detail, you must ask two simple questions to yourself; why do you need a PC? And do you need a $2000-$3000 PC for your Gaming?

Why AMD Radeon RX is a Better Choice over Nvidia RTX GPU?

The simple answer is value for money, Yes that’s it.

I am not against Nvidia products I do love them. The Nvidia GTX 1650 Super and the GTX 1660 are great value for money GPUs, which offers great performance in all-round gaming and editing. So, do not think I have some kind of biased opinion on Nvidia products. While I am using an Nvidia GPU, I know what I could have to get more for the same price if I have chosen AMD.

This is my main point, do get more for what you are paying for. AMD is always a better choice when it comes to value for money, and you can get better specs in your Graphics Card for the same price than you could have with an Nvidia GPU.

To understand this comparison logically you must understand the need for your PC at first and also the budget. You should always go for better specifications in the same budget, rather than picking up trendy or lucrative components. ( A quick advice, always go for the best or flagship quality CPU, as this is the most important part of your PC, and most of the time people do not upgrade it throughout the PC’s lifetime due to compatibility issues. So, you have to put most of your budget to the CPU itself, which will ensure better performance and longevity. )

Now let’s discuss some of the most famous GPUs from Nvidia head to head against AMD Radeon GPUs.

Now you can think of yourself after seeing the above stats, that for almost $85 less, you can have almost the same performance if you are using RX 5600 XT. Also, RX 5600 is newer than the RTX GPUs, so in the same segment, AMD is far better value for money choice than the RTX GPUs.

Now let’s consider the AMD RX 5700 XT against Nvidia RTX 2070, with the same kind of stats like the above one.

So, it can be easily said that AMD RX 5700 XT is a better choice when it comes to saving around $100, which can spend on a beautiful case or a more powerful Liquid Cooler or PSU.

Conclusion of the Debate

Yes in some parameters Nvidia has the lead but in some other parameters, AMD also won the lead. But, in most points and at performance in most of the popular titles, AMD is neck to neck equal with the AMD itself. So, if we can buy even more latest components, which will provide me better compatibility performance and that is also at a way cheaper price than of course, AMD is the better deal. Even if you are a live streamer, pro gamer, or a content creator & editor, AMD is still just as good as Nvidia for you, at a cheaper price with better values.

However, still, Nvidia owns the competition as Nvidia has the RTX 2080 Super and RTX 2080 Ti on their side, and the equivalent AMD RX 5800 XT and RX 5900 XT is still not launched. So, if budget is not a concern for you and you want to get the best GPU in the market, then of course RTX 2080 Ti is still the choice.

Now AMD CPU with AMD GPU is a point of consideration as well. As most of the buyers are picking the AMD Ryzen CPUs without any second thoughts, so using GPU from the same brand may affect your PC’s gaming performance at the finest edge. Yes, it is always recommended to use AMD GPU with the AMD CPU, so that the performance sync work in harmony. Also, Nvidia GPUs are suggested for Intel CPUs by experts around the world. Though you can do mix and match, using AMD GPU with AMD CPU can make a little difference in performance.

If it comes to choosing a gaming laptop, you should know in laptops battery backup is a huge issue and it is worse with gaming laptops. The gaming laptops do contain a mobile version of the mainstream GPUs which are engineered and optimized to draw less power to boost the performance.

However, no matter what, Nvidia GTX series GPUs including GTX 1650M and 1660M do draw more power than the latest Radeon Pro 5500M.

While on other hand RTX 20 series does not have any mobility GPUs for the laptop to date, so the laptops powered with RTX 2060, RTX 2070, or RTX 2080 are very powerful in case of graphics processing, but they use the same chipset with a low amount of cooling capability. Which in turn increases the price of the laptop to a huge level, also draws the battery power at a drastic level, but the GPU keeps up producing heat as the cooling system is not actually up to the mark. So, if you compare AMD GPU powered laptops head to head against Nvidia GTX & Nvidia RTX powered laptop, then AMD provides you better cooling, long battery life, not best but up to the mark graphics processing performance, and all that in a reasonable price. So, without any doubt, the AMD Radeon RX 5500M laptops are the best choice as the gaming laptops though they are still under development.

According to many sources, the AMD RX 5400M and RX 5300M laptops are going to launch by the end of Q4, 2020. The AMD Radeon RX 5300M and the AMD Radeon RX 5400M already attracted much attention towards them. OEM laptop producers like Lenovo, Asus, Acer, HP, already started production of new budget level gaming laptops using the RX 5330m and AMD RX 5400M. The RX 5300M, 5400M, and 5500M do contain quite powerful specs but also optimized greatly to consume a very low amount of power, in comparison to Nvidia GTX 1650m and 1660m. Furthermore, the AMD 5500M and 5300M indeed produce less hit than the last-gen AMD Radeon mobility GPUs.

So, in the case of a gaming laptop, AMD Radeon is a way better choice than any Nvidia GPU powered laptops.

In simple words yes the Nvidia RTX 2080 ti and the Nvidia Titan RTX are the most powerful GPUs in the world without any competition to date until the AMD RX 5800 XT and 5900 XT arrives. Also, on the other hand, Nvidia is about launch RTX 30 series GPU by Q4, 2020, so they are way ahead in technological advancement than AMD. Nevertheless, if you are tight on budget but do not want to compromise your gaming performance then the AMD Radeon RX 5600 and 5700 XT is your bet. To adjust in the budget do not end up with getting GTX 1160 Super, instead, go for the RX 5600 XT without any doubt, it would be a way for beneficiary than you can imagine. This is it for the discussion, bye until next time folks.

What is Adaboost boosting technique?