First of all, we should at least have some basic knowledge about the common types of internal storage media and storage drives. A computer has two types of memory. There is a primary memory and secondary memory. Primary memory is temporary, such as RAM. But secondary memory is permanent, and this deals with storage drives. Every computer needs a place to store its data whether that data is photos, documents, video and audio files, or an operating system.

A computer needs a place to store this data internally on a storage drive and these drives also need to be non-volatile which means that they will retain the data even if the power is turned off. There are different types of internal storage drives that a computer uses and these drives could be magnetic hard drives, solid-state drives, or hybrid drives. 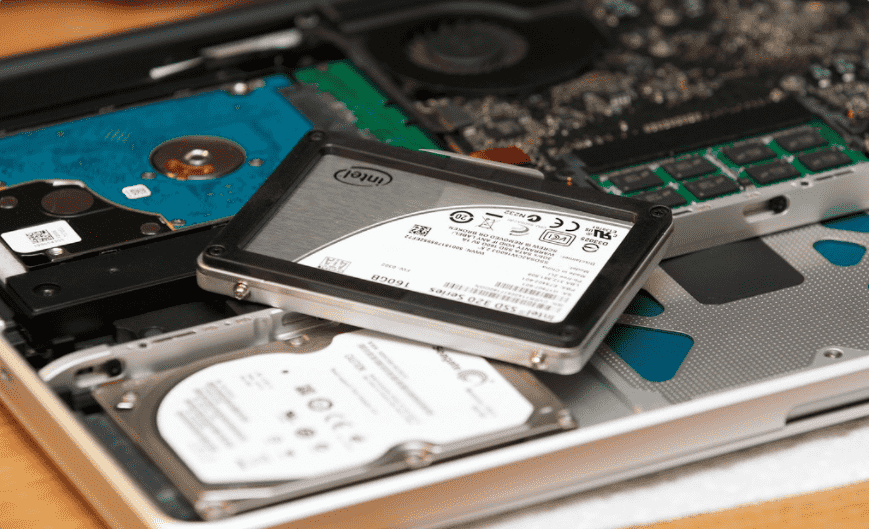 Magnetic hard drives have been around since the beginning of computers. These are pretty common. They were first introduced by IBM in 1956 and even though they have been around for a long time, they are still used today. The hard disk drive is a sealed case that contains magnetic disks and these disks are where the actual data is stored on. These disks rotate at high speeds and as they do, the actuator arm will either write data to the disk or read data from the disk depending upon what the user wants to do. These magnetic disks can rotate at high speeds of either 5400, 7200, or 10,000 RPM.

Hard drives also come in two physical sizes. They come in 3.5 or 2.5 inches. 3.5-inch drives are what desktop computers and servers will use and 2.5-inch drives are what laptops will use. They can store a lot of data up to 3 or 4 terabytes. They are not that expansive but overall they are slower as compared to a Solid State Drive (SSD).

SSD sometimes referred to as Flash storage typically is lower in a capacity as compared to a hard disk. It is a lot more expensive but the plus side is that they are extremely fast in loading applications, opening documents, and booting up your computer. The time it takes to perform those operations is very quick compared to loading all of that data off on a conventional hard disk. These drives have no moving parts. So instead of using magnetic disks, these drives use flash memory chips to store data. So the data transfer is very fast. And in addition, since they have no moving parts, they are also very quiet and more energy efficient.

SSDs also come in different form factors. They would come in a standard 2.5-inch rectangular form factor or they would come in the newer M.2 form factor. Now both of these drives store data on flash memory but they connect to the motherboard using different interfaces. The standard 2.5 inch SSD uses the SATA interface just like a hard drive and the M.2 SSD would plug into an M.2 slot. SSDs are more resistant to physical shock compared to hard drives, whereas if you were to physically shock a hard drive, such as dropping it or jolting your computer, it could crash the drive and your data would be lost.

SSDs can also be used on both desktop and laptop computers. Now because of the price difference between SSDs and hard drives, a lot of times if you were to buy a new computer, the computer may come with both an SSD drive and a hard drive.

For example, to store data that you would access less frequently or the drive would be used to store large files such as videos. Now you could buy or build a computer with one large SSD for all of your storage, but that would significantly increase the price of the computer and it’s almost pointless to have files that you infrequently access on an SSD. So this is why to save money, computers will use both an SSD and a hard drive. There is also a solution where you can have an SSD and a hard drive as one physical drive instead of two separate drives. And these are called SSHD or Solid State Hybrid Drives.

It’s both of those different types of storage, all in one convenient package. These drives combine the use of magnetic disks and flash memory.

In a hybrid drive, the magnetic disks would be used to store data, while the flash memory would be used for the caching of data and these drives are pretty much automatic. The firmware in the drive will actually learn and decide by itself as to where the data will be stored.

How does SSHD work?

Hybrid drives have been around for a while now, on notebooks and laptops. The reason why you would like to have a hybrid drive is that it contains both hard disk and solid-state drive thus having features of both the drives. SSD stores the most frequently used data and help to read/write files quicker than HDD. While the HDD portion of SSHD stores less used files or data.

Hybrid drives increase reliability because it reduces the wear of the hard drive and minimize mechanical wear and tear, so they are a better choice.

The way a hybrid drive works is it has a memory manager in the hard drive that will identify what data and files are used most frequently and it will store it in the flash memory that is the solid-state part of the drive and basically when your computer needs the access to that memory, it is going to be extremely fast as it knows what you use frequently so everything that you use repeatedly will load faster.

With that comes system responsiveness as testing hybrid drives is a little bit tricky because when you are initially booting Windows, none of the information will be stored in your solid-state part of the drive. If you were to load Windows again, it will load much faster and that’s when you get comparable performance to a solid-state drive.

The storage process is circulated by a technology known as Adaptive Memory Technology. It is inbuilt in Seagate. Seagate Technology Holdings plc is an American data storage company. This technology uses a special algorithm to track and prioritize the frequently used data which is also known as Hot data, for storage in the fast, solid-state portion of the hybrid hard drive.

Some examples of hot data are boot files, applications, common documents, etc. It is designed to change data priorities as different applications request new data over time. For example, if you are watching any particular movie, again and again, it means that you will be opening that file every time you want to watch the movie. This file will be noticed by the algorithm which will put that particular file in the SSD so that next time, you can get faster access to that file.

If you stop watching that movie after some time, this will also be noticed by the algorithm and it will understand that the file is no longer in frequent use, so it will transfer the file to the hard disk drive storage. We can call it infrequently accessed data. Other examples of infrequently used data may contain large movies, photoshop documents, old files that you do not open as often, etc. These files since they are not frequently accessed as hot data have a lower priority so they get stored on the hard disk and not on the flash drive.

SSHD makes intelligent determinations about which data to be stored in SSD flash memory, without any influence from the host or related storage device drivers.

The device itself knows which files to move to flash and which files to keep on the HDD. It does not have to rely on drivers or any other software. It can tell what files are accessed more frequently and it will move them accordingly.

The other mode is called host optimized mode. In this type of mode, the operating system may be the drivers, any other software, etc, those bits of software tell the driver where to move the files. Before the device did not have to rely on any type of software but with host optimized mode, the SSHD relies on other software to know where to move data whether that be on the flash or the hard disk drive.

Let us now discuss some pros and cons of SSHD-

So to sum all this up in a nutshell, solid-state hybrid drives are almost as fast as solid-state drives but they have the capacity of a conventional hard disk drive. It’s basically a budget-friendly best of both worlds version of an SSD. If you are having a slow computer, I recommend checking out a solid-state hybrid drive, put that in your machine and you will notice a huge difference. You could put an SSD in if you want and then you will get the true performance of solid-state but that is typically more expensive so an SSHD gives you the best of both worlds at a much more affordable price.

But one thing that is needed to be kept in mind is, no matter what drives you use, all drives will crash at one point just because of wear and tear. And you should always back up your data. You can use iDrive to backup your data and it backs up everything to the cloud. You can also try a few different backup programs but backing up your data using iDrive would be the best option to choose in my opinion.

Windows 11 or 10: How to Delete, Create and format Partitions

How to use existing VDMK Virtual hard disk in VMware Player