Miracast with all other essential connectivity options and good video quality indeed makes it one of the best available budget TV right now in the Indian market.

According to our readers, Kodak customer support is not great and that they need to improve; otherwise in our short usage, we didn’t find anything worth to be mentioned as Con.

One of the quite old ways to entertain our evening while sitting with family is Television. New developments have already converted big boxes of TVs into slim trim LED panels that we can hang on our walls; not only the hugeness but also the extortionate prices have been down for LED to make them in the reach of each and every one. One of the Television company in India which is playing a quite good role in dissipating the low budget LED with the smartness of Android is Kodak. It is enough old in India and we don’t need to introduce this brand, it says its story by the product of its available in the market. However, of course, having a good brand value doesn’t mark that each and every product under its umbrella would be perfect and value for money; we have to do some research before buying. So, if you are pondering to buy 32HDXSMART Xpro 80cm HD ready LED smart tv of Kodak, then first go through this review. We have used this LED smart TV around a month and after that, we ended up here with our verdict.

Design wise the TV is almost similar to Kodak 43UHDXSMART 4K UHD Smart TV (review). However, being an XPRO series model there are indeed some changes in terms of ports and quality.

Tv’s body is of polycarbonate which is black in colour like other Kodak models featuring A+ Grade panels at front. Nothing seems widely distinguish from the front side; same logo placement; stands quality, amount of bezels you will find in the 43 inches UHD Kodak would not be much distinct if we juxtapose it with 32 inches model.

Thus, what exactly is non-identical in this TV?  The thing is the ports arrangments. In the Kodak 80 cm (32HDXSMART XPRO) on the vertical side, you will find two AVI inputs for video+audio joined with two 2.0 USB ports. It’s cool as long as you don’t want to give HDMI input to your TV when it is on the wall since all the HDMI ports are placed on the rear bottom side of the TV. Thus, when it is on a wall bracket, then perhaps you find some problem to connect 3.5 mm audio and HDMI cable, especially for big handed people.

Trivia: The hard switches to operate the TV are easily approachable with big tactile buttons. 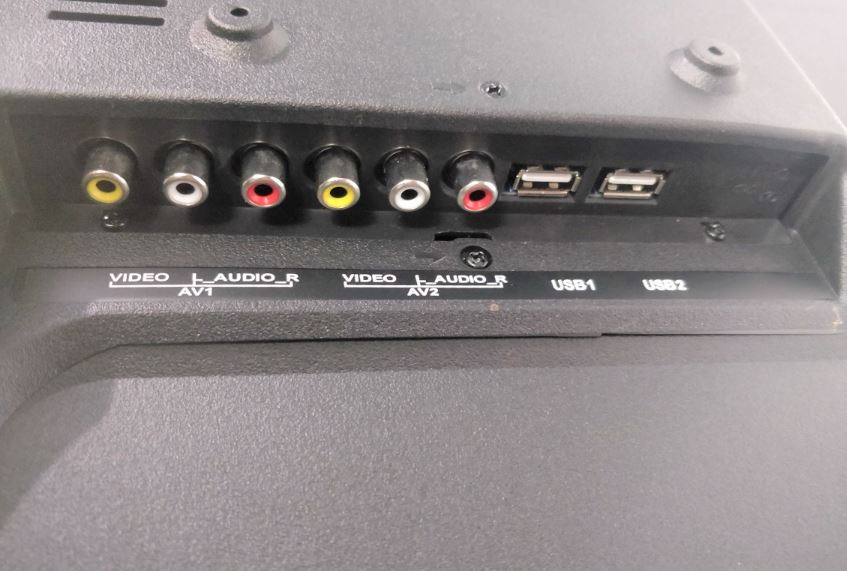 Yes, indeed the arrangement of the ports is little here and there, however, the best thing is at least we are getting all required ports on such a budget TV.

Ports are Earphone (3.5mm) RJ45, Optical, Audio out, HDMI1, HDMI2, HDMI3 (ARC-Audio return channel) and TV (standard ) input. So, whatever is there, design and ports wise the TV optimal at this price, we can’t demand more than this. 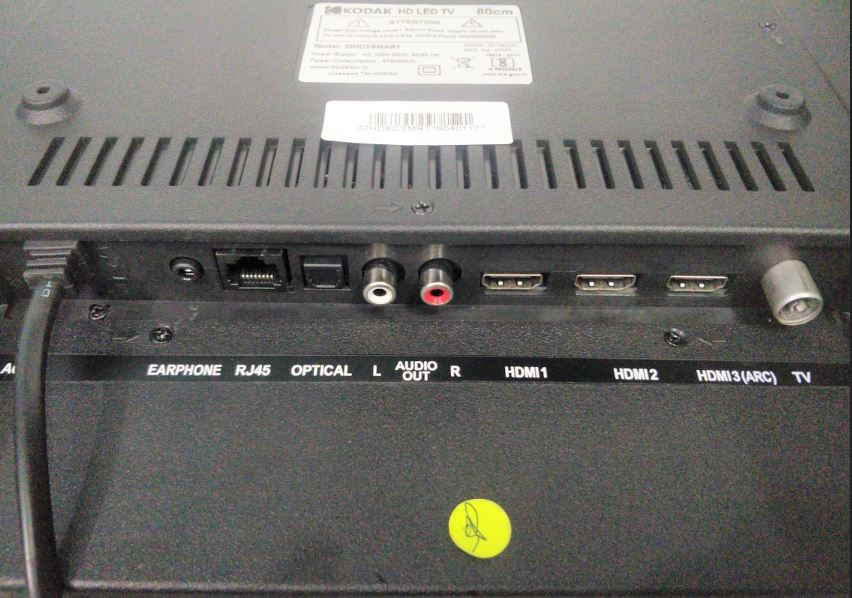 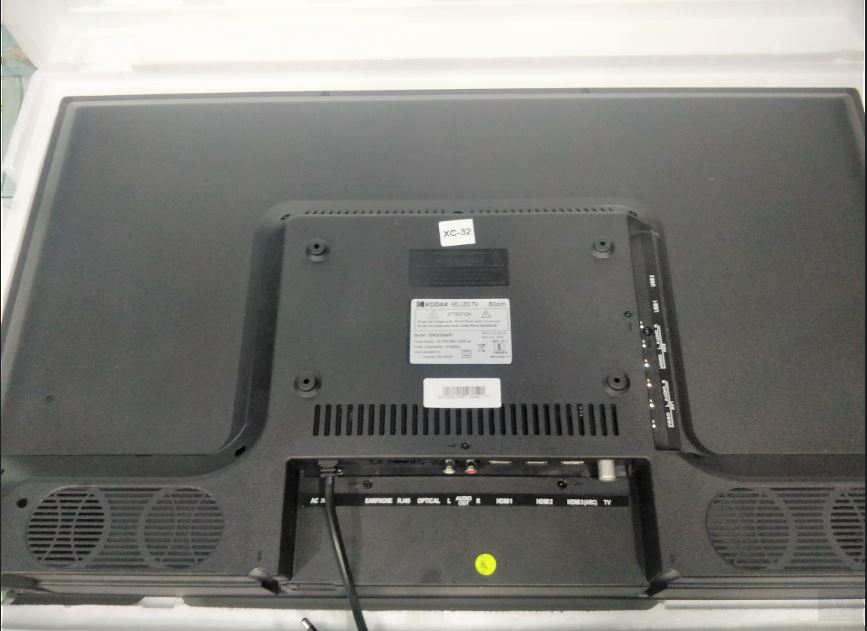 Coming to the software part, the device is running on Android 7.1.2 with a customized graphical user interface. Earlier, the user interface of the Kodak TVs was not that much impressive as it now. Rather easy to navigate and operate, the home screen shows thumbnails of all the trending videos and music which gives a rich content feel. However, all of these fetched from YouTube.

As we mentioned YouTube, let’s talk little about its performance on the TV. Playing videos on YouTube are a piece of cake, although the TV’s screen support only HD resolution, in Youtube itself we can set any video’s highest resolution to 1080p. Yes, I know it will not be going to show the exact Full HD resolution but whatever, it will improve the picture quality of Youtube videos on TV.  Qwerty keyboard feature for searching on YouTube and other apps could be a little discomfort for hasty users. 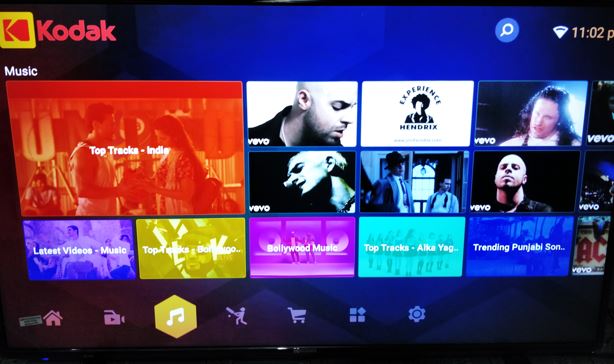 Other than YouTube, Netflix and Hotstar are two pre-install streaming apps but you can extend this list by installing more apps using the Aptoide TV. It is App manager which allows the user to install various apps from its repository. If you want the Google Play store on the Kodak 32HDXSMART XPRO, then you have to download its APK file from the internet to install it manually. However, you might not need to be because most popular apps are already on Kodak TV’s app store.

So, software wise, we didn’t find any problem this time while our usage, it worked smooth and fine; no major lags or glitches.

Well, we already talked about design and software, now let’s confabulate about the connectivity. Apart from the Ethernet connection (RJ45), the other way to connect internet on the TV is WiFi. Just before this TV, we had reviewed Daiwa D42E50S 40-inch Full HD LED Smart TV, which was almost same by price wise but in terms of connectivity, it was really woeful, and literally thanks to god, we didn’t find that here. We said this because most of the Indian television manufacturers are lagging behind in terms of R&D and that cause glitches in performance. So, here with Wifi, no problem. Another thing which astonished us this time was the MiraCast connectivity. Almost from the beginning, when we had reviewed the first TV of Kodak to the last one which was Kodak 40 UHD; the Miracast connectivity was not quite contented. After keep trying for 4 or 5 times then only we could connect our phone with them, however, not this time. It is perfectly fine with Kodak 32HDXSMART XPRO, we projected our smartphone screen multiple times over Smart TV using Miracast and every time it successfully grabbed that.

Note: For Miracast we used an app on our phone called Display Phone Screen On TV.

As aforementioned, if we consider the price of the TV, then the contrast ratio and brightness along with colour production are poised. We had played both 720p and 1080p videos on the TV, the picture quality was good especially when we were on 1080P videos, of course, more pixels on videos make the output slightly better. Although on high contrast images and in black and white areas, the shadow of the of black pixels can be seen clearly on white areas; in LEDs, this phenomena is quite common.

From the viewing angle, we don’t have any complaints because it has 178-degree support that can easily cover most of the eyes sitting in a lobby or drawing room.

Yes, while playing videos using pen drive, you have to download the third-party apps like VLC player that can play a wide range of video and audio files. Using the default player, the user can only play MPEG4, DAT, VOB, MP3 and WMA.

The response time of TV is 6.5 ms which makes it a feasible choice to use as a monitor for your game output. However, while gaming the audio output will not be as one gamer expected for, since it uses 2 speakers of 10 watts that lack bass and treble. We recommend using external speakers for gamers and music lovers.

Note: Automatic Volume Level and Audio Equalizer both are there. AVL ensures the level of audio should be the same as it set to last time by the user while using the TV.

Another thing is if we don’t use any app of the TV for some time and left it ON, wallpapers automatically will start showing on it which is quite nice.

So, the question is whether you should buy it or not? At our prima facia and the usage of one month, we can say that Kodak 32HDXSMART XPRO is value for money device. As I said above, we have reviewed a Daiwa TV, a few months before which also comes at the same price range, well, after reviewing this Kodak XPRO TV series model, we can say the Kodak XPRO 32 inches is much better in terms of OS and other functions usability. However, what we have seen or got to know from different subscribers of the H2SMedia, that the service of the Kodak is not up to the mark and they are quite facing a challenge in after-sales support. So, we would like to suggest Kodak please give some heed to their customer support.

Otherwise, Miracast with all other essential connectivity options and good video quality indeed makes it one of the best available budget TV right now in the Indian market.

According to our readers, Kodak customer support is not great and that they need to improve; otherwise in our short usage, we didn’t find anything worth to be mentioned as Con.