We are advancing very fast in the world of Technology and we keep seeing new peripherals and gadgets every single day. But when it comes to the latest technological innovations, we all love using them, without the need of knowing further details about the same. Being a consumer, you don’t necessarily need to know that or know how exactly some technology works. But you should at least know what exactly it is called and how it is different from other similar technologies while explaining the same to others or at least at the time of any argument related to technology. In most cases, even if you do not know the exact term associated with a particular technology, you can get the job done as the person whom you are discussing the same, understands, what you want to say, and will help you with the necessary steps.

The same goes for when you go to some shop in order to shop for some electronics. For example, if we go to a computer shop to get an SSD, you can go to the shop and say that you need a solid-state hard drive, and the shopkeeper will definitely give you an SSD without explaining there is nothing like Solid State Hard Drive, as such. An SSD is different from regular hard drive, which I will be discussing here later on. But what I mean to say is that there are some technologies, which we misunderstand or use interchangeably, however, that doesn’t mean we are explaining the thing right away. So, today I will discuss top misunderstood technology terms that you should have a clear conception about. 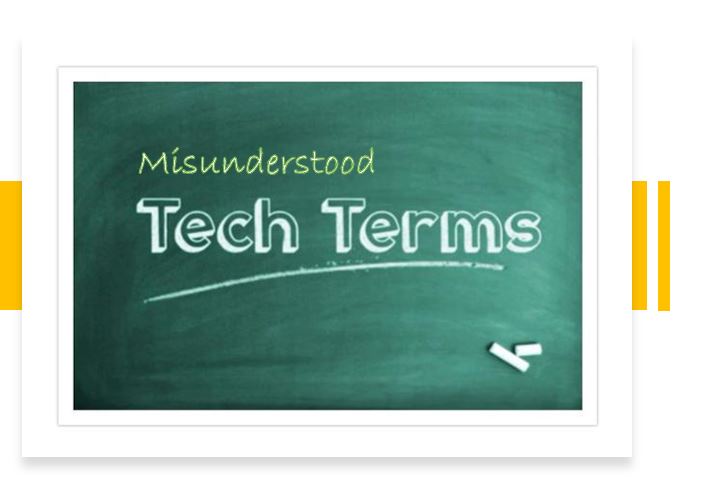 So, without any further delay, let’s get started with the top misunderstood technology terms so that you use the right terms from the next time.

On this Page show
Disc and disk
Hard drives
GPU and Graphics Card
Modems and Routers
Kilobits and Kilobytes, Megabits and Megabytes, and others
HD everywhere

When we talk about hard disks, CDS, DVDs, Blu-Rays and other types of storage media, we often use the term disc and disk interchangeably considering them to be the same. However, in reality, these are two different terms used in two different realms of storage technology. When we use the term disk with the letter K at the end, we refer to magnetic storage devices, which include hard disks, floppy disks, etc.

However, when we use the term disc with the letter C at the end, we actually refer to optical drives like CDS, DVDs, Blu-Rays, and others. So, you should never be confused about which disk or disc to use when you refer to one of them. Talking about other storage media which do not have rotating parts within it they are not discs or disks at all, like SSDs, SD cards, and others.

Most users refer to any non-removable non-volatile storage device on a computer as a hard drive. But that isn’t correct. When we talk about hard drives or hard disk drives, we refer to the magnetic disk drives, which are our non-removable storage devices that are connected to our computers. Here, the word Hard refers to the rigid magnetic platters, which actually stores our data and they are not flexible. It is the reason they are called hard. On the other hand, floppy disk drives, which are magnetic storage drives, as well, store data in flexible magnetic disks, and thus, they are not referred hard.

However, if you want to talk about Solid State Drives or SSDs, they are not hard drives at all. Even if you go to the computer shop and ask for a solid-state hard disk, you might get the thing that you are looking for, but what you have said doesn’t have any validity in the digital world. Solid State Drives are neither disks as they do not have any rotating part, which I just talked about in the last point, nor do they come with any rigid platters to store data, and thus they cannot be called hard drives. You should better call them simple Solid State Drives or SSDs, as they are marketed. If you want to refer to storage for computers in general, you can better call them drives which include everything like Solid State Drive or SSDs, Hard disk drives, NVMe SSDs, and others.

But, if you got a new smartphone, which has the Adreno 530 GPU you should better call it a GPU instead of a graphics card as the GPU is a part of the complete SoC or the System on a Chip on your smartphone. This is not the same as a normal graphics card, which you will purchase for a computer that comes in a separate package and needs to be connected to an expansion slot, typically the PCI slot.

Talking about modems, these are the devices that can convert the signal that is coming from your ISP to a signal, which can be understood by your computer or laptop. Typically, if you have a single computer, you can directly connect it to the modem through an ethernet cable and you are good to go. A modem is the abbreviation of modulation and modulation and this device was basically used and is still used nowadays to convert analogue signals to digital signals and vice versa on DSL connections which are still offered by telephone companies. However, today you can also find modems that can convert optical signals coming from your FTTH provider, cable provider to signal that your computer can recognize and these devices can also connect only one computer to the modem.

However, most modern routers are a combination of a hub, switch, and additionally, a wireless access point in most cases. So, if you get a router, you can get the output from your modem and connect it to your router to simply connect more than one device to the network so that they can access the internet. Your router is intelligent and will transfer the data packets to the intended devices without, which a modem cannot. Talking about routers, there are also some wired routers, which can only hook up wired devices like computers, game consoles, and other similar devices. But there are also certain routers, which also come with modems inbuilt and you can basically find ADSL modems, which can, not only function as a modem, but you can also connect multiple wired and wireless devices to it.

So, in a nutshell, a modem is just a device that helps you to get online, however, a router can be a combination of a modem along with other devices that will basically help you to connect more than one device and make them share the same internet connection. You can find more about the different networking components here.

Kilobits and Kilobytes, Megabits and Megabytes, and others

At the time of opting for an internet connection, we often come across big numbers like 100 Mbps, 1000 Mbps, 1 Gbps, 10 Gbps and many more. But, when we start accessing the internet, we notice that the actual speed is much much less and even far less than even half of the speed, which we apparently pay for. So is it a scam! It is actually not so.

Most internet service providers show the internet bandwidth in Bits per second or more precisely, Megabits per second, Gigabits per second and so on. So, if you find a 100 Mbps connection and you are getting a speed which is close to around 12.5 MBps while downloading something, or at the time of speed test, you are actually getting the speed that your ISP has promised you.

So, never use MBps and Mbps interchangeably as this can lead to completely different speeds, and if you promise high-speed internet using MBps, and offer 1/8th of the speed, you can actually be sued for that. So, you should never use them interchangeably.

This is a subject of confusion among numerous users, when they see the term HD on almost all monitors and TVs, including the cheapest ones. But, when the term HD is there on a TV or monitor box, it can refer to any solution, which is at least greater than or equal to 720p. For example, if the resolution of a screen is 1280×720, that is an HD display.

So if you find an HD display anywhere, without any suffix, it typically refers to the 720p resolution and the term HD is basically used to make low resolutions of screens sound better.

But, if you are getting a display, with a higher resolution the manufacturer should definitely use a prefix to quantify the HD display that it comes equipped with. Obviously, for the best marketing of a display that has a resolution higher than 720p, they will definitely not use only HD, as that will bear every possibility of being looked down as a normal HD display by a consumer, who might have a little knowledge about technology and hence, will not show any interest in the product.

So, those were the most misunderstood technology terms that most people often use interchangeably and it can sometimes create a mess. Sometimes, if not every time, you can also get fooled if you do not know the terms properly. In a number of cases, most companies can offer you products and services that have real information about it on pen and paper, which is actually far inferior to what you are paying for.

But you might render it in a different way if you do not know the terms properly and you might end up getting fooled. Those companies actually take advantage of your not knowing the technical terms properly, and you can’t complain, as well. It’s like most people consider the pixel count, or Megapixel count, on a smartphone, to be more precise as the only factor that determines the camera quality, and are willing to pay a premium for just that number, without looking at the other notable aspects. So, you should at least know the technical terms that you often use every single day.

That was my list of the top misunderstood tech terms most people use interchangeably and are definitely not correct.? Do you have any questions in mind? Feel free to comment on the same below.