NAS aka Network Attached storage devices help to overcome storage problems and gives your data a centralized place. A place where people can access and share the data 24×7 through the network.  There are lots of companies that offer Software + Hardware NAS boxes which are basically an out-of-box NAS solution, for example, Qnap and Synology are two veteran NAS vendors.

The cost of NAS boxes depends on the features such as the amount of storage, RAM, CPU etc. But if you want to convert your old system into a NAS box without spending hundreds of bucks then here is the solution. The Opensource Linux NAS software is light Linux Distros but enough power to handle your storage problem. You can build your own NAS server for your small business by using an old or new server/PC hardware. Here is a list of some best open source NAS Linux Operating system available on the Internet.

You can use the NAS box along with some software like OwnCloud to create personal home cloud storage solution. The personal cloud solution helps you to sync your personal files directly from the desktop to mobile devices. You can also listen to your songs and watch movies on the mobile phone those are stored on your NAS or personal desktop, while on the go using the internet connection. Here are 6 open source personal cloud solutions.

Operating systems for a NAS server are basically special software that supports typical server tasks. For example, you enable file sharing for Windows or macOS devices, they stream content to DLNA-enabled devices, can serve as a mail server and the like. They generally have command-line interface but for management, one can control the NAS server remotely from local or another device via the browser GUI web interface. Here is the list that includes all popular Linux Distros based on Linux or FreeBSD meant to use for storage management purposes.

FreeNAS is a most popular free and open-source FreeBSD based NAS operating system that has enterprise-class features and enterprise-ready ZFS open source file system.  It can be installed virtually as well as on hardware to create a centralized data environment. The interface it provides is very intuitive (web interface). It supports Windows sharing SMB/CIFS, NFS and Apple file shares (AFP), FTP, iSCSI. Besides this, it also supports plugins to extend its functionally such as CouchPotato, SickBeard, SABnzbd, Maraschino, HTPC Manager, etc.

One thing should be noticed before installing this OS on some Old specs system is that it needs a good amount of RAM to work, especially when you planning to install a ZFS file system.

NAS4Free is an Open Source Storage NAS (Network-Attached Storage) distribution based on FreeBSD. Earlier it was known as NAS4Free but in 2018 its developer has renamed it to XigmaNAS. XigmaNAS supports sharing across Windows, Apple, and UNIX-like systems.

It supports ZFS and encryption services. The web interface is not much user-friendly and one may find some difficulty while navigating and extending its functionality through plugins.

OpenMediaVault is Debian based Linux network-attached storage (NAS) solution and light in weight. It can be your choice if you do not want ZFS.  The services it provides are SSH, (S)FTP, SMB/CIFS, Rsync, BitTorrent client, DAAP media server,  and much more.  It is based on Debian which means you will get frequent updated and patches. Its plugins directory is not much vast but still evolving at a good pace and will keep home users happy. The web interface it possesses is very clean and user-friendly.

The installation of this NAS software works similar to Debian Linux and after the setup, it will ask you to log in. By default, the username and password for OpenMediaVault is “root” and the password “openmedivault”.

OpenMediaVault or Debian Linux comes with an SSH server that provides administrators with full rights over the operating system via a secure protocol. To do this, an SSH client must be installed on the client.

Rocktsor is based on Centos Linux and BTRFS to provide NAS and cloud storage. It built on a rock-solid CentOs which is another good thing.  It supports BTRFS which is a filesystem like ZFS to provide high data integrity and security.  It can use as a personal cloud server and SMB Cloud Server with a clean and simple web GUI

Rockstor Personal Cloud Server allows you to create your own local private cloud to reduce the risk and cost of the public cloud.

Rockstor Small and Midsize Business (SMB) Cloud Server is a special build for small businesses that require the capacity of several hundred Terabytes to capture the business demands. You can save you crucial business data on Rockstor SMB cloud server and less sensitive data on the public cloud. This practice will decrease the cost and increase the security of data. Also, an organization doesn’t need to rely completely on an expensive public cloud.

Helpful resource: How To Install Rockstor NAS On Ubuntu/Debian in Virtual Machine

Openfiler is another enterprise-level NAS/SAN Distro like FreeNAS.  It can easily convert your old system into IP-based storage. Openfiler provides some very useful features such as iSCSI target for virtualization, Fibre Channel target support and block-level replication.

You might face some update problems with it. Also, the operating system on which it based is rPath Linux distribution which not updated since 2008 which makes it not a very reliable choice but you can lay your hands upon it for learning or to fork out some new NAS software distro.

Nexenta’s edition is a free edition which basically a community version of a commercial storage product. The free version can support up to 18TB of storage. It gives ZFS support and based on open Solaris called Illumos. As it is a strip version of the commercial product so you don’t have worry about updated, stability and support.

Get the Nexenta NAS ISO

Amahi cannot be considered as NAS operating system instead of NAS it is a well-known Home server. It is a community version built around the commercial version.

It is a home server with tons of apps and plugins to expand the functionality such as WordPress, Plex media server, OpenVPN, Own could and more. It handles your entertainment, storage, and computing needs.

You can store, organize and deliver your recorded TV shows, videos, and music to media devices in your network. It is based on the most popular distros Fedora & Ubuntu. As it is not a full-fledged NAS so don’t use it for your critical or top-secret data. Also, we cannot rely completely on their cloud system they are providing because we don’t know how much secure it is.

If you are looking for a simple File Server – Simple Network Attached Storage then Pre-build Turnkey solution would be an option to mull on. It supports and compatible with Windows network file sharing including support for SMB, SFTP, NFS, WebDAV and rsync file transfer protocols. User can manage both private and public storage on Samba and SambaDAV suing the Turnkey File server. It has easy to understand web graphical user interface. 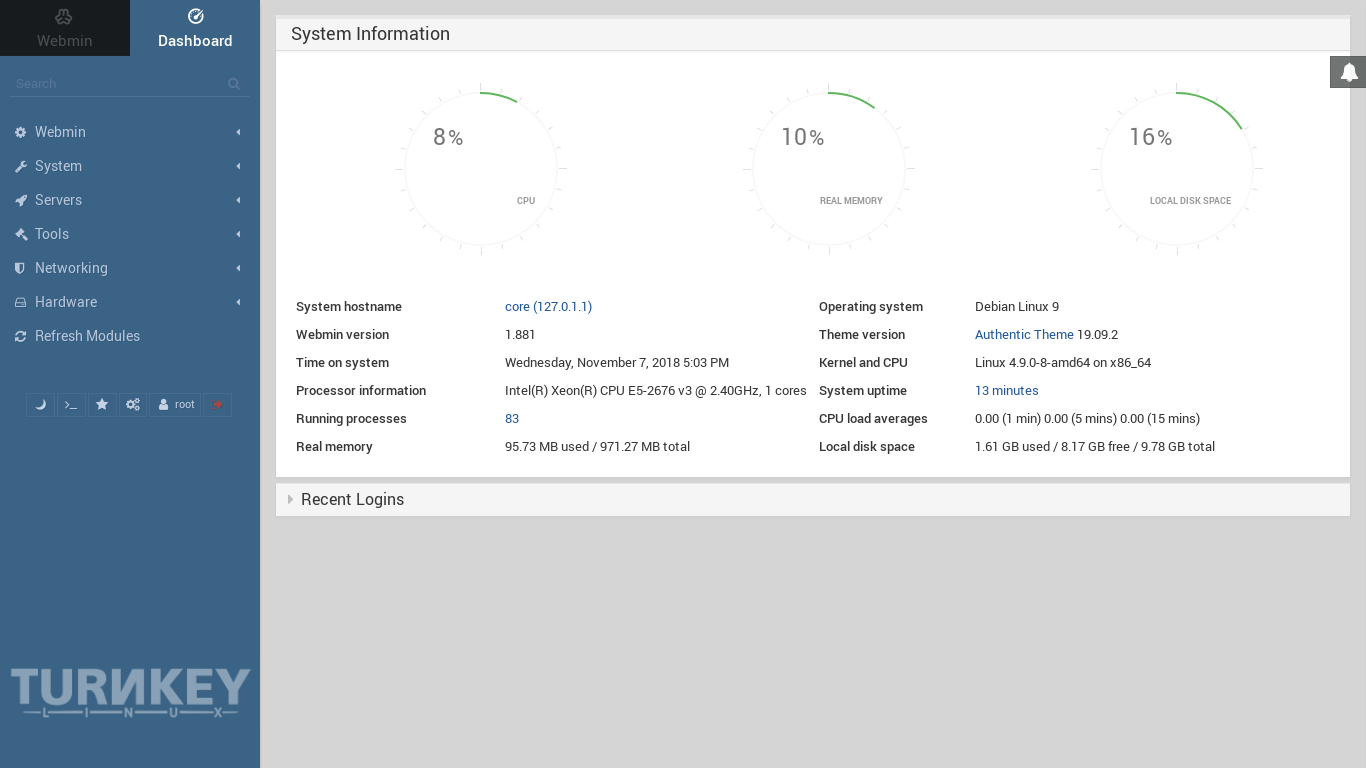 If someone is planning for large data storage models and cloud solutions with a scalable infrastructure then he or she should go through the available Linux SAN storage solutions. Here are some:

Enterprise Storage OS is a quasi Linux distribution based on the SCST project. Its purpose is to provide SCSI targets via a compatible SAN (Fibre Channel, InfiniBand, iSCSI, FCoE). It is memory friendly operating system, means the user can boot it from a USB flash drive and everything will be loaded into RAM to run and in case it failed a notification mail pushed to a user by the ESOS.

OpenDedupe is another opensource cloud storage gateway and filesystem. It has been in the market since 2010 developed by filesystem SDFS, and the Datish NAS appliance. It is an inline deduplication file system based NAS OS for local or cloud storage purposes along with some advance attributes such as storage optimization, scaling to secure and deal with large amounts of data. It is available OpenDedup Deduplication NAS Virtual Appliance to quickly install and start working with it.

PetaSAN is an open-source Scale-Out SAN solution that relies on Ceph storage engine (open source SDS cloud storage solution). PetaSAN is designed from the ground up to do one thing: provide highly available clustered iSCSI disks. It uses modern cloud-based technologies to provide elasticity and agility. PetaSAN provides highly available clustered iSCSI disks and each can be identified by its virtual IP address.

Just like the NAS operating system mentioned above, the PetaSAN can also be operated using the graphical user interface from non-Linux systems using the browser, and if you want a command-line then SSH is always there.

CryptoNAS live-CD: The live CD can use to encrypt data without bothering about complicated technical issues. A computer running on live-CD works as a file server (NAS) that encrypts your private data.

Note: The CryptoNAS has not been updated for last 7 year, so this would not be a trustworthy project. For just a knowledge purpose it is here.

What are Google Adsense Auto ads? How do they Work? Complete Info

What is Software as a Service? How it is different from everyday software? Are they any good?